With “Star Wars: The Last Jedi” still a week away, theaters will again be flooded with an array of indie flicks, hoping to cash in on the lull of studio offerings by rapidly expanding award contenders like “The Disaster Artist,” “The Shape of Water,” “Lady Bird,” and “Three Billboards Outside Ebbing Missouri.”

James Franco’s blip of gonzo greatness, “The Disaster Artist,” showcased itself well in 19 theaters last weekend, grossing $1.2M, for a strong $63,755 per. The question is, as A24 expands it to 800+ theaters this weekend, will multiplex marauders show up?

In what amounts to an insider biopic, based on one of the worst cult films of all-time, “The Room” is more of an off-night oddity here in Los Angeles, and really hasn’t been seen by common moviegoers.

Oh, hi Mark…and for some reason…it’s also currently unavailable to stream. Will be interesting to see if this becomes a box office blip, or rallies around the strong performances of Franco and his cohorts Seth Rogen, Zac Efron, and his #1 brohan, Dave Franco.

Guillermo del Toro’s “The Shape of Water” also sprang to life with $83k per in two New York locations. Look for it to break out at the box office as Fox Searchlight’s romantic tragedy expands into 41 venues this weekend.

Meanwhile, Woody Allen’s latest, “Wonder Wheel” stopped with just $28k per in its debut, which is an awfully low number for Woody. With overwhelmingly pedestrian reviews, Amazon’s release is positioned—based on the track record of his previous flicks “You Will Meet a Tall Dark Stranger” and “Irrational Man”—to gross under $5M domestic. Not to worry, the Woodman is already hard at work on his next feature and has no time to deal with box office bemusing.

The only other wide release this weekend is Ron Shelton’s “Just Getting Started” from Broad Green Pictures.  The PG-13 comedy stars Morgan Freeman, Rene Russo, and Tommy Lee Jones and could hit a sweet spot like Broad Green did before by courting an older audience with 2015’s “A Walk in the Woods,” starring Robert Redford and Nick Nolte.

Interestingly, Shelton, who was known for a string of sports flicks in the 80s and 90s—“Bull Durham,” “White Man Can’t Jump,” and “Tin Cup”—comes out of retirement to direct, something he hasn’t done for 14 years.

The arthouse flick with the most buzz this weekend is Neon’s “I, Tonya,” based on the life of the tormented ice queen, Tonya Harding, played to the hilt by Margot Robbie.

With Oscar talk percolating for Robbie, Craig Gillespie’s R-rated dark comedy might just clean up like a Zamboni in exclusive release—four theaters—this weekend by delivering the best PTA of all films in release.

Lead-In Image (“The Disaster Artist” Movie Poster) Courtesy of A24; Poster Design by P + A 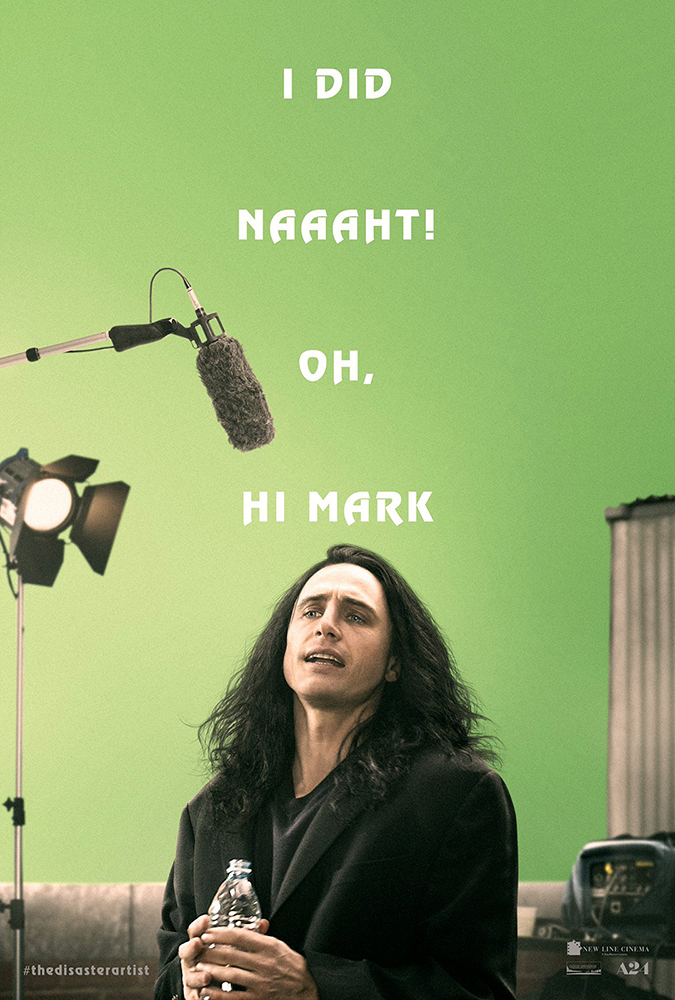