We’re not car nuts, but we do love design.

And when we saw a Nissan Figaro on a Hong Kong street yesterday (above) we were pretty impressed by its 60s retro-stylings – the two-tone color, the rounded edges, the convertible top. 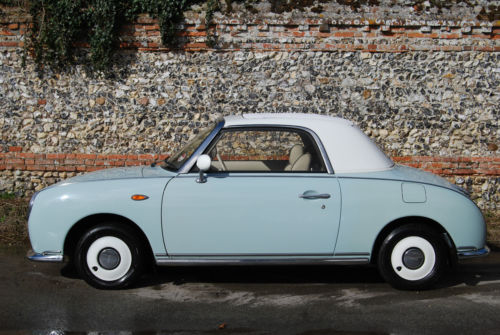 It tapped into the same vibe as a Volkswagen Beetle or MINI Cooper, but it seemed more fresh and new, and we couldn’t wait for the roll-out.

Then we did some research and had to hit the brakes. What we had been admiring was a limited edition car produced over 20 years ago, and available only through a lottery-type system.

After seeing a shiny Figaro in person it’s hard to believe they’ve been around for so long – and a little disappointing that there are not that many around.

Here’s a good Autoweek article about the Figaro, which was first introduced as a “Back To The Future” concept car at a 1989 auto show in Japan.

Back to the future? We’re flux-capacitating. We thought 2014 was upon us and Nissan had manufactured a new car for the ages.