It was a super stormy night, though; raining cats and dogs. I think the weather, and the fact that it was a Wednesday night teamed up to drive down attendance a bit, but that never stopped the rock, did it?

After sitting through some other bands of, let’s say, varying quality, I was ready for Caustic Casanova. Any band that would make this video is ok in my book.

The thought I had the moment they started their engines was, “well, I guess I am finally going deaf tonight”. The level of volume and scale of the frontal assault was staggering.

I asked Francis about it in a text, post-show, and he said, “Ha ha, we definitely use volume as an aesthetic”.

That is one way to put it. Another would be for me to say that I have seen a lot of bands over the years, and I am sure that Caustic Casanova is one of the loudest I have ever witnessed.

They opened with two new songs (one hilariously called “Pontius Pilates”), before moving into familiar territory (for me) with Breaks songs “Show Some Shame” and “Thundersnow”, before finishing up their set with “Snake in the Grass” from 2012’s Someday you will be Proven Correct.

No banter, no breather, it was one big face melter of a set. At one point I was pretty sure my eyeballs were being pushed through the back of my skull. Francis and Stefani’s vocals fought for the same space the racket coming from the guitar, bass, and drums, creating a visceral wall of sound. 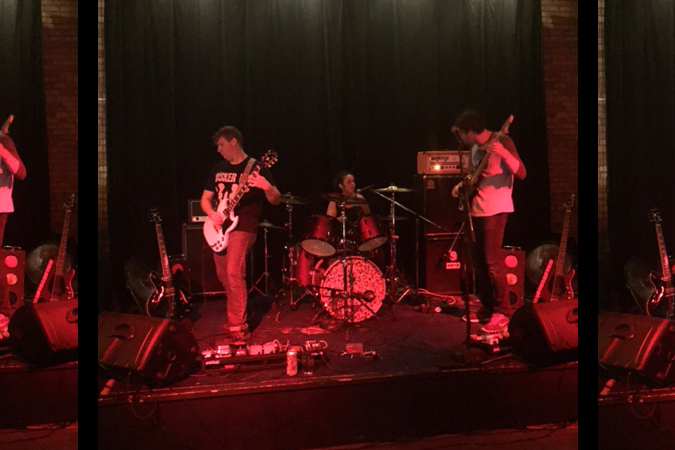 With all the aggression and noise, it is remarkable that the band was still able to coax delicate flourishes of ambience in the middle of the hurricane. Andrew, with his monster pedal board, was a big part of this depth. He was able to bob and weave amongst the low-end rumble of the rhythm section, and it made a ton of difference. This was not noise for the sake of noise.

In the end, I didn’t go deaf; not yet, anyway. It was a rainy, crappy night, but Caustic Casanova still delivered the goods, and I am excited for the next time I can see them perform. They are on tour all over the U.S. right now, so go on and get some.

Breaks and other albums are available on iTunes, Amazon, GooglePlay, their own site, and the damn merch table at a show. Get out there, and support live music!

And if you’d like to learn more about Caustic Casanova, don’t forget to check out out our interview with the band.