I am fairly new to Haley Bonar, but I was so taken with the song “Last War” when I heard her talk about and perform it on Minnesota Public Radio, I knew I was pretty much hooked.

I was lucky enough to recently sit down for lunch with Haley on a frigid Minneapolis day.  The interview will be online later this week, but today let’s talk about her most recent album Last War.

What a compact little hand grenade of an album it is, too. 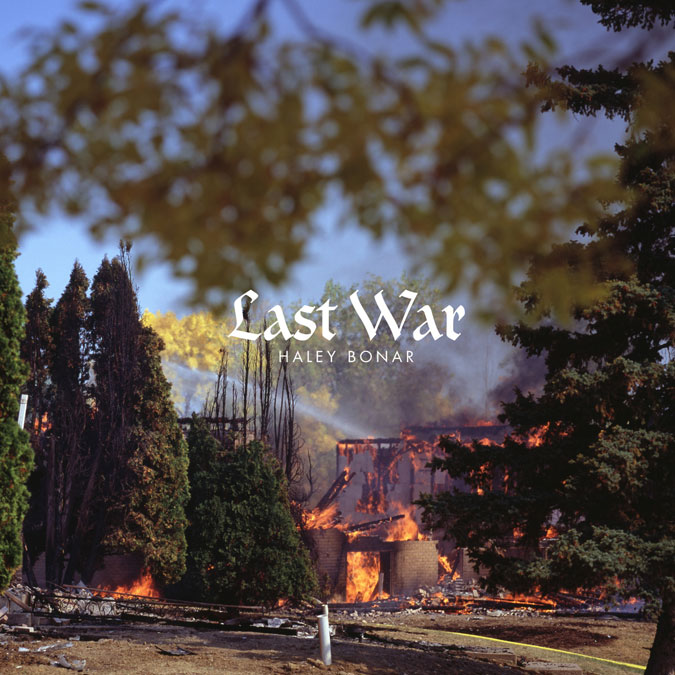 The imagery lets you know you are in for something special.  It is such a surreal picture.  A house all but burned to the ground framed by lush, green, and perfect topiary.  It’s a perfect visualization for what you are about to hear.

The album opens with the propulsive “Kill The Fun”; the tempo of which and the moody atmospherics remind me of, in the best possible way, classic Cure.  It’s a rock & roll travelogue from San Francisco to Wisconsin, and you should certainly thumb a ride.

“No Sensitive Man” comes across so tough it is almost comical.  What happens when you get what you claim to want?  When Bonar howls, “I don’t want to talk!”, you believe it and get the hell out of her way.

When I finally saw the official video for the title track, I knew I was prepared to fully go down the rabbit hole with this artist.

The song itself is simply aces across the board, but the video for “Last War” is a rare case in which the imagery improves the whole experience.  It’s Cormac McCarthy meets Robert Johnson’s crossroads, and it’s hard to forget.

For a song and video as spare as “From A Cage”, there is a lot to unpack.

It might be a cliche, but the best art is more concerned with asking questions than it is with the answers, and so it is with “From A Cage”.

From there Last War careens through its most rocking number in “Woke Up In My Future”, but for the final approach and landing, Bonar quiets things down for the last couple of songs.

“Bad Reputation” sounds maybe like the sequel to Joan Jett’s song of the same name; written in the hindsight of a long, eventful life.  “I wish I could date my former self.  She’d be a fun girlfriend…  she got a bad reputation…  She don’t care about no reputation”.

From “Can’t Believe Our Luck” into the spectral, harrowing “Eat For Free”, the album ends not with a bang, but a whimper; lulling the listener into an uncomfortable sleep in which the dreams come fast, but perhaps not entirely welcome.

It’s not the artist’s job to make the listener feel comfortable.  Answers are a comfort.  Open questions make people uneasy.  This is a good thing.

Last War is available online from Graveface Records, iTunes, Amazon, and of course from your friendly, neighborhood record store.