This week, Clara speaks with filmmaker Joe Benedetto, who has been writing screenplays since the age of 16. Benedetto is currently showing his new gritty, black and white crime noir film Hide The Sausage at the 10th Annual Manhattan Film Festival on April 18th at Cinema Village. Six days later, it will screen in Asbury Park as part of the Hang On To Your Shorts Film Festival, where it is nominated for Best Long Short Film and Best Director.

Benedetto’s previous work includes the high-concept fantasy feature film A Guy Named Rick, which was released on DVD & VOD in 2013, and was the first film produced under his Trajectory Films banner.

As for Benedetto’s feature films in the works, there’s Tale of the Wet Dog, the detective comedy Gumshoes, an adaptation of the award-winning British novel Harvest, and the comedy Weekend at the White House (which he co-wrote with actress/writer Alexi Melvin, daughter of Oakland A’s manager Bob Melvin). 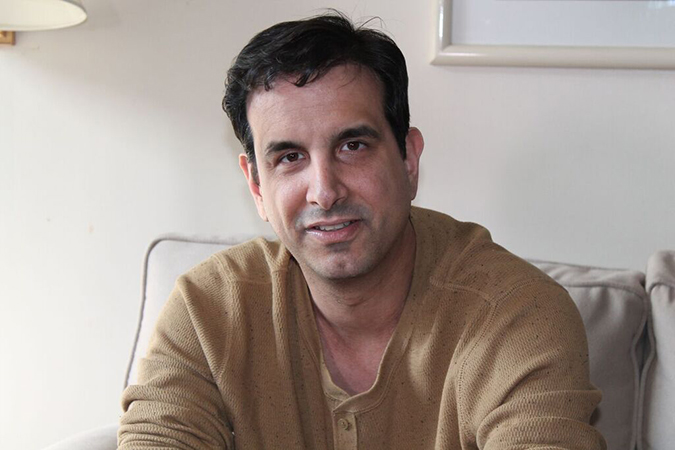 1. When and how did you first get into movie making? Is it something that you always knew you wanted to pursue?

The summer before my senior year in high school… I was 16 years old and had no clue what I wanted to do in life. I flew out to Eugene, Oregon, from Brooklyn for my cousin’s wedding. It was the first time I went on a vacation without my parents. Within minutes of landing, driving from the airport through town, I had an epiphany. There was just something about the late afternoon lighting, the angle of the sun, and the layout of the town that triggered something in me that seemed very cinematic. The floodgates opened and I knew I was a writer – specifically, a screenwriter.

When I returned home to Brooklyn two weeks later, I started writing my first screenplay (set, of course, in that very Oregon town that provided me with inspiration).

2. What is the biggest challenge you have overcome professionally? How has that impacted the way you work today?

In 2011, I was directing my feature film A Guy Named Rick while I was caregiver to my mom, who was suffering from advanced Alzheimer’s disease. Taking on one of those roles is difficult enough. Doing both at the same time is a challenge that pushed me to my limits. The long-term impact is that it makes me appreciate and savor what I do, and never take anything in life for granted – personally or professionally.

3. Can you tell us about an especially memorable moment while producing one of your films? What is it that makes it memorable?

Two memories immediately jump out… In 2010, we shot scenes for my film Here Comes the Bribe on a golf course. For some unknown reason, I always had a goal to shoot on a golf course.  It was a picture-perfect day. The fact that we had access to the golf course for free made it even better.

Then in 2015, we were shooting scenes for Hide the Sausage inside Duane Park nightclub in Manhattan. We had a lot of pages to shoot and a hard deadline because the restaurant needed to open at a certain time. The day could not have gone better, both logistically and aesthetically – it reminded me why I got into the business in the first place.

4. From where do you find inspiration for new stories and movie plots?

I think every artist, no matter the medium, draws inspiration from everyday life.  It’s usually something very simple that we might otherwise overlook. I can be walking down the street and see or hear something that is very commonplace and it can act as a catalyst, it can be the kernel of a great idea. The trick is to weed out the good ideas from the bad/mediocre ideas.

5. What is the best thing about working as a producer and director?

Aside from the obvious of being able to do what I was meant to do, the best part of making a film is knowing that I started with a blank page and now the story is coming to life: actors saying lines that I wrote, a crew working to make it all happen. The ability to create something from nothing.

6. Any advice for others wanting to pursue your profession?

Jump in all the way.  Don’t treat it as a hobby.  If the word “quit” ever enters your psyche, then you were probably meant to do something else.

7. Tell us something that people do not know about you.

Nothing beats homemade Italian food when I was a kid.  But living in Manhattan now, there are countless dining options. I love Il Cantinori because I think it reminds me of that very homemade cooking I ate as a kid. I recently dined at a French restaurant in Manhattan called Deux Amis, which I really liked, as well.

The Beverly Hilton. Great hotel. What made it so great is that I was there for work, but it felt like a vacation. What could be better?

10. Which three items must you always carry with you when working?

Three items I always carry with me when I’m directing a movie? That’s easy: my shot list, my shot list, and my shot list. Preparation and knowing what you’re doing before you do it is of the utmost importance on a film set. I plan every shot months in advance and that list is always stuffed in my pocket when I’m working.

11. What song can you listen to on repeat? Why?

“Cruel to be Kind” by Nick Lowe. It’s just one of the great radio songs of all time. There is something about it… I don’t know, maybe it triggers good memories in me. I just dig it.

12. If you could meet anyone in the world, who would you want to meet? And why?

That’s a tough question. So many names coming to mind. If you asked me tomorrow, I might have a different answer, but right now I would probably say Mr. Mel Brooks. The man is a true giant in my industry and an inspiration. I would just like to ask him how he does it. And I don’t just mean how he has been able to be so successful for such a long period of time. I mean how he actually does it; I would like to know how his workflow as a writer has been over the years.

13.  Where will we find Joe Benedetto in five years? What are your goals and dreams?

Making original movies that not only entertain a viewer the first time they see it, but that also have a long-term shelf life. I want to continue to build the brand of my company Trajectory Films. Equally important, I never want to repeat myself as an artist.