In Hollywood, President’s Day weekend is the celebration of cinema in terms of a long weekend and extended playability. That’s no truer than this year, when the biggest flicks have already opened the week previous, with “LEGO Batman Movie,” “50 Shades Darker” and “John Wick: Chapter 2” all doing bang-up business at the box office—finishing win, place, and show—and they will continue to do mega money as the old guard will likely overshadow the trio of new box office incumbents: “Fist Fight,” “A Cure for Wellness,” and “The Great Wall.”

While “Batman” will likely walk away with the box office belt once again, it could stack up against Ice Cube’s new R-rated comedy, “Fist Fight,” as his flicks have been known to strike a chord — “Ride Along” and “Barbershop” have been solid franchises for the actor.

Co-star Charlie Day (“Pacific Rim,” “It’s Always Sunny in Philadelphia”) is no Kevin Hart though, and most of Cube’s previous comedy hits have been PG-13. His “Friday” series is the exception, and have done well with the R-rating tag, although none of them opened with more than $14M.

In 3,000+ theaters expect “Fist Fight,” which cost just $22M to make, to punch up close to $20M this weekend, and possibly more when the final bell rings, as the underserved African-American audience may jump on this one and put up some higher-than-expected numbers.

Meanwhile, the most controversial movie of our times, Donald Trump’s “The Great Wall”…er…wrong film. The $150M Chinese action adventure, which bridges the ever-closing gap between China and Hollywood and stars Matt Damon, is Zhang Yimou’s (“Hero,” “House of Flying Daggers”) first English-language film, one that has already made $242M worldwide, $170M in its native China.

Universal is releasing the PG-13 film domestically; however, reviews have not been kind—43% on Rotten Tomatoes—which makes a tough sell even tougher. Alien dragons, anyone?

If we close our eyes, use our imagination, and view this film as a prophetic metaphor for our own wall that the powers that be want to build between the United States and Mexico, this could be the most important movie of the century. Unfortunately, it isn’t. This film was built to make bucks. And by bucks, I mean yuan.

Damon’s last two action adventure flicks, “Jason Bourne” and “The Martian,” debuted north of $50M, something “The Great Wall” doesn’t have a shot at. In 3,200+ theaters, upwards of $20M is likely; however, true action aficionados will no doubt chase down John Wick again.

Unless you’re Stanley Kubrick, you don’t make a horror film these days with a running time over two hours, and you certainly don’t make a chill pill that costs more than $15M, right Blumhouse? Gore Verbinski (“Pirates of the Caribbean,” “Rango”) has done both of those things and he doesn’t have the critical support either—40% on Rotten Tomatoes—which means Fox’s film is likely in big trouble.

Verbinski has charted the terror track before, scoring a huge hit 15 years ago with “The Ring,” as it made nearly $250M worldwide. This time though, he doesn’t have a hook to lure in teens, as Fox’s fright flick is geared towards older adults, which typically don’t have a hankering for horror.

The closest comparison is probably Guillermo Tel Toro’s “Crimson Peak” which floundered with a $13M debut two years ago, and just $31M domestically.  That film, however, had a widely recognizable cast in Tom Hiddleston and Jessica Chastain, while “A Cure for Wellness” stars relatively unknown Dane DeHaan and Mia Goth.

And as dapper as the scenery and production design is, you know “Cure” must have cost a small fortune, although Fox is being notoriously tight-lipped on that front. Never a good sign. “Crimson Peak” had a budget of $55M; that’s probably as good a place as any to start.

In 2,700+ theaters, $8M will likely be all that’s left on the box office chopping block, as “A Cure For Wellness” will likely take a quick exit stage left to Netflix.

As if you weren’t going to buy a ticket anyways, here’s some Marvel propaganda to wet your whistle. Yes folks, Guardians of the Galaxy team up with Earth’s Mightiest Avengers. This might be kinda big.

Feeling jingoistic? Can you name all the U.S. Presidents? In not, here’s a jolly jingle that may help you remember courtesy of the Animaniacs. 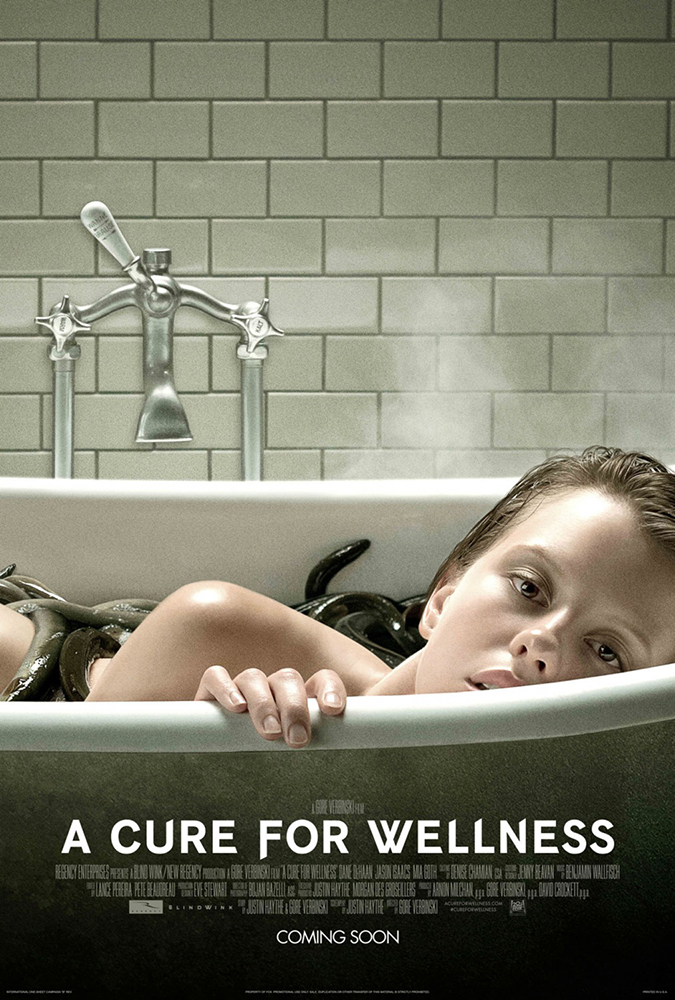