When I interviewed Jim Knable last year about what projects he was planning for, he told me about an upcoming premiere of his play (a George Bernard Shaw adaptation) at a kombucha factory. I said then that it sounded very Brooklyn. Now that I’ve attended one of the performances this past weekend, I can confirm that I was correct. Very Brooklyn, and also very good.  Alex Gruhin is a co-founder and artistic director of Nightcap Riot, which produced the event, and he set the friendly tone by warmly meeting his guests at the door and welcoming us in from the snowy street. 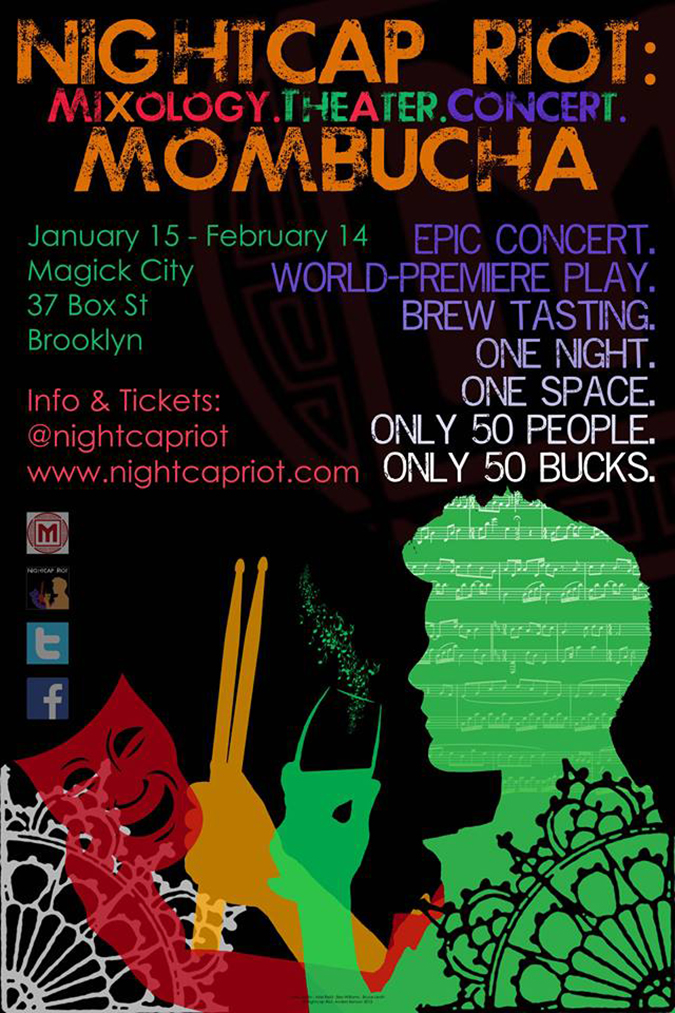 Limited to 50 people, priced at $50, the aim is an evening to remember…as Alex put it: “the ultimate date night, the opportunity to meet new, creative friends, to play with artists, to drink from the next dimension and to see the theatre and music of the future.” A tall order, admittedly, but to give him credit, they really delivered.

The entertainment during the theatrical run is varied; at about 8:00, on the evening I was there, we were treated to a performance by Michael Chaut, a magician, as a special guest. Card tricks, disappearing handkerchiefs, a hundred dollar bill torn up and reassembled before our eyes…he had us all laughing, and also extremely impressed. (Michael Chaut is the founder of Monday Night Magic, an off-Broadway show running weekly at the Players Theatre in Greenwich Village, and he invited us all to come check it out. Which I may just have to do, one of these weeks.) 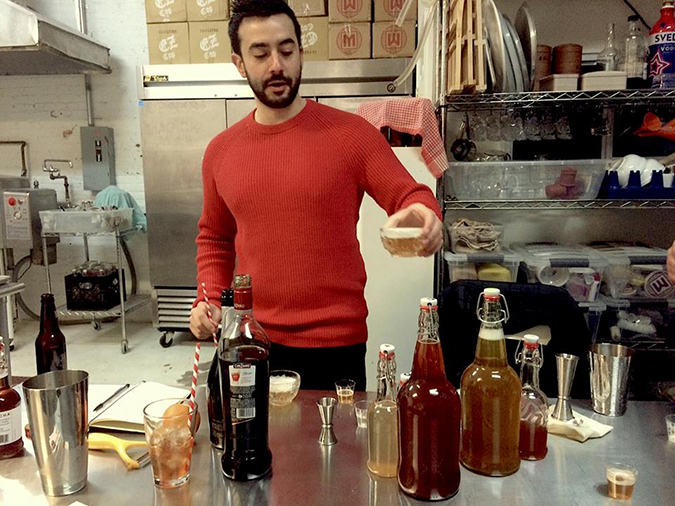 Next up, kombucha (a fermented tea beverage). Fear not the kombucha! I was a little bit leery of the stuff at first. But the founder of Mombucha (named in tribute to his mother, who taught him how to make the stuff), Rich Awn, told us about his company, how he makes the artisinal product, and how we can make our own with a starter. He showed us around the factory, and let us try some samples of various flavors. To my pleasant surprise there were some rather delicious kombucha-infused cocktails available for purchase, with and without alcohol. (There was also wine and beer for anyone kombucha-averse.) Rich Awn and his business partner were collecting tips at the bar as sponsorship for their participation in the upcoming AIDS/Lifecycle (a seven-day, 545 mile bike ride from San Francisco to Los Angeles, raising money for HIV and AIDS services), and we were collectively eager to help with that good cause. (We were also quite impressed with their ambition—perhaps kombucha really is that good for you!) 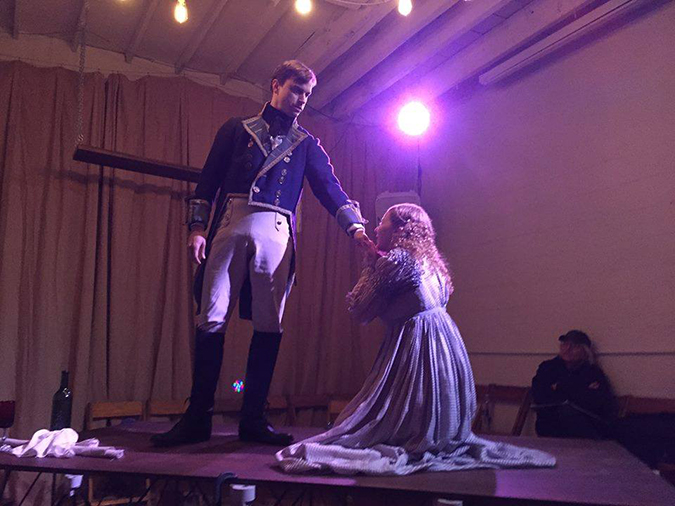 Then the play! While we were milling around the kombucha factory, the performance space had been set up in the next room. A very tiny room. I found myself sitting right at the table the actors were using as a stage, literally a foot away from Napoleon himself. I haven’t seen or read George Bernard Shaw’s The Man of Destiny, although Jim Knable tells me it is considerably talky-er in the original than in his adaptation, called Destiny and the Little Man. The enthusiastic cast of four was obviously having a terrific time engaging the audience. Ariel Nichole Reid was a standout as the Mysterious Lady, but they were uniformly good. I won’t give the plot away, but it takes place at an inn in Italy in 1796, and concerns some scandalous letters gone astray. 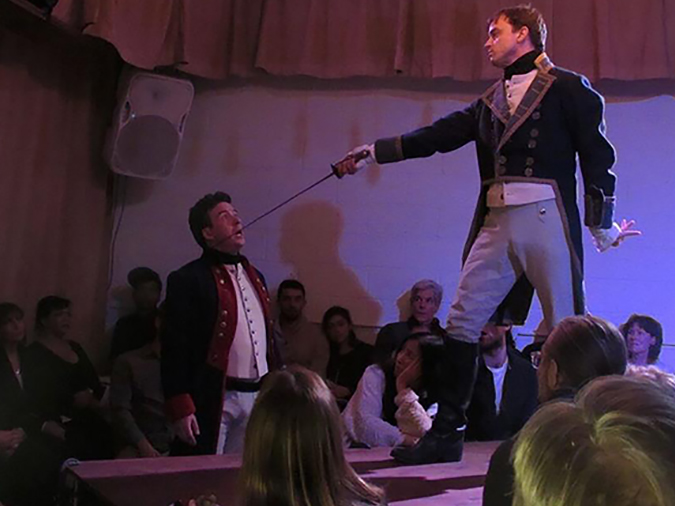 Whether it was the tight quarters, the shared fun, or the kombucha cocktails, I’m not sure, but the audience was as engaging as the cast, full of arts professionals and arts enthusiasts. After the play, my new friends and I were busy discussing whether the Mysterious Lady could possibly have been Napoleon’s wife in disguise, or an intimate associate of Paul Barras, or whether she was somehow Destiny personified. Or was she the devil? There was certainly something magical about her. We also talked at some length about international copyright law (the original play is in the public domain in the United States; not so in Europe). We were given some tea to drink, lined up to use the restroom (forewarned is forearmed; there is only one toilet at the kombucha factory), and pretty soon a concert began. 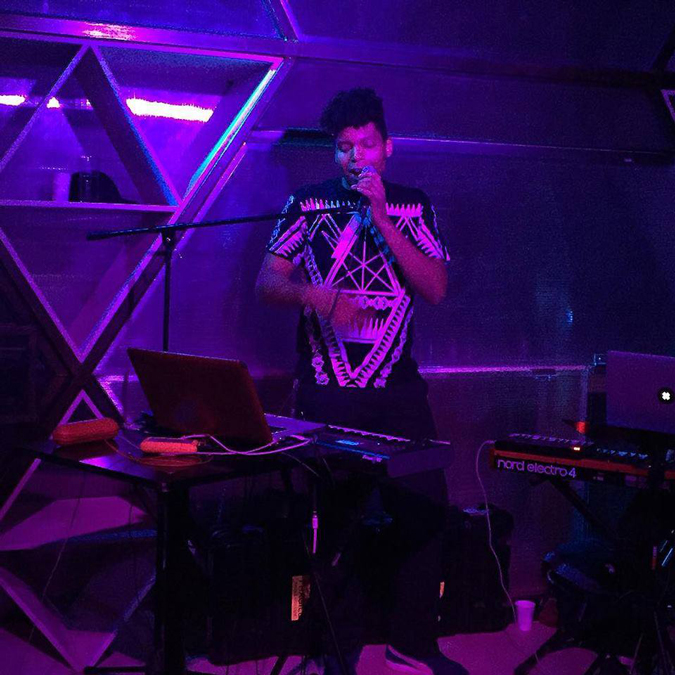 I would have loved to have stayed to hear JC Brooks and the K.i.D. but sadly, I had a long way to drive home and knew I had to get up early the next day. Had I stayed longer, I would have received some Mombucha to go (and a take-home kombucha starter kit).

Go check it out! It was definitely one of the more fun and unusual evenings I’ve had in a long time. It’s only around until February 14th.  I am looking forward to seeing what Nightcap Riot does next…