I Contain Multitudes of Bob Dylan:

A Live (Second) Listening Review of Rough and Rowdy Ways

I went to go see the Walt Whitman exhibit at the New York Public Library whenever that was. Last year sometime? I worked midtown, within walking distance, so I’d stop by on my lunch breaks to take in a little bit at a time. Not that there was much, but it was densely packed into a room.

Of course, I’m not at that office right now, so when I use “worked” in the past tense, it’s not because I don’t work there anymore. I do, more so than ever. But I work there from home. I even get to play my guitar and sing old songs as part of my work, teaching kids and maybe some adults I’ll never even see in an online class about American history through popular music.

Around this transitional time, the first three songs from Bob Dylan’s new album slipped out into the listening ether, though there were only rumors that a new album was coming. The most improbable first—classic Dylan move: to put out “Murder Most Foul,” a 17-minute slow dance with no rhythm, riffing around the death of JFK as remembered through a playlist from an imaginary jukebox of brass memories. Then came the Whitman-titled “I Contain Multitudes” with its chaotic references begging to be tossed across the quarantined media world. Okay, I’ll do it, too. Anne Frank, Indiana Jones, and The Rolling Stones walk into a bar. What do they have in common? They go right up to the edge. Just like Bob Dylan. The edge of oblivion? The edge of still being an action hero or rock star as a septuagenarian? (Nope, not Anne Frank here, though it’s nice to imagine she would have been both had she the chance). No, man, Dylan said it in his one and only interview pre-album release. He just wrote down what came to him and whatever you bring to it, you’re welcome to.

“False Prophet” came third and with it the final admission that these songs you’ve been listening to are from a new 10-song album of original (not jazz standard) tunes, Bob Dylan’s first in eight years, the one everyone secretly or openly hoped was coming.

And now today, on Juneteenth (which we all know was intentional), the whole album has dropped and it is flowing through my ears to my fingers, where Bob Dylan is ripping off Billy “The Kid” Emerson in “False Prophet.” NPR covered this, so I don’t have to.

I’m listening to “False Prophet” now as Dylan sings “songs of love and songs of betrayal”; he climbs “mountains of swords on his bare feet.” I was a big fan of 2001’s Love and Theft and this whole album finds Dylan firmly back in that swaggering poetic territory, with some new painting techniques learned from 3-5 albums in between (depending on how many albums 2017’s Triplicate counts as) in which Dylan sang the standards made popular by Frank Sinatra. I knew for sure if he came out with another album of originals, he’d show these influences, just like he showed what he learned in the late ‘90s onward after diving back even further than he had before into Grail Marcus’s Old, Weird America with Down in the Groove (1988) and especially World Gone Wrong (1993).

If nothing I’m saying makes any sense here, it’s because I’m just unloading my decades of Dylan baggage, worship, and research; and it doesn’t matter. Just let the names and album titles ripple over you. “You know exactly what I mean,” Dylan just sang in my ears from “My Own Version of You,” which is his take on Frankenstein, the doctor and his monster. It’s awesome. Suck it up. “What would Julius Caesar do?” he asks. Remember that when he sings about crossing the Rubicon later in the album.

Back to Love and Theft—what I loved about that album were all those staggering couplet rhymes. There are jokes, real and imaginary names, scenes from a past that never existed and the many pasts that still exist all too painfully in an American prism of prisons. I don’t know if there’s a song quite as powerful as “Mississippi” on this new album. But I don’t need it; I already have “Mississippi.” I didn’t get dropped into a “Workingman’s Blues” or “Ain’t Talkin’” from 2006’s Modern Times, two songs that make me stop and listen to them every time they come on. But that’s cool, too. There’s something else going on here. And you know what it is, Mr. Jones. We always knew. He deserved that Nobel Prize. And now he’s here to claim it.

Okay, he’s worked through “My Own Version of You” and now he’s into that little melodic hook of “I’ve Made Up My Mind to Give Myself to You” that twists a quiet rose petal knife into my gut. It’s probably from something else. I don’t care. It’s from everything. The lyrics are deliberately stripped of all the proper names and other star-studded handles from the previous songs, except for that shortlist of cities and parts of cities, from East LA to San Antonio. “If I had the wings of a snow white dove, I’d preach the gospel, the gospel of love, a love so real, a love so true, I’ve made up my mind to give myself to you.” And then he sings about being taken out travelin’ by a travelin’ man, and then going far away from home…with her. It’s a dream, just accept it. “Lot of people gone, lot of people I knew, I’ve made up my mind to give myself to you.” He’s talking to us, guys. Remember when he didn’t want us to claim him in the 1960s? He’s changed his mind. “It just takes [him] a while to realize things.”

The multitudes of Bob Dylan contain all of us.

“Black Rider” is tempting to dissect. I first heard it when I was passing a line of large dumpsters in the middle of Prospect Park this morning, on a sweaty morning run, wearing a yellow bandana over my face because, well, you know…I’m a bandit. The “Black Rider” could be death, probably he is. He could be the “Man in the Long Dark Coat” from 1989’s Oh, Mercy. Hey, Black Rider is also the title of a musical fable written by William Burroughs and Tom Waits, so it could be inspired by that. “My soul is distressed, my mind is at war. Don’t hug me, don’t flatter me, don’t turn on the charm. I’ll take a sword and hack off your arm.” And then there’s the final reference to “Some Enchanted Evening” and being on the job too long. Yeah, it’s probably about death. And the music also evokes “Strange Fruit.” Love and theft, indeed.

And now we’ll say “Goodbye Jimmy Reed.” It’s another song that would be happy on that 2001 album, though it’s more specific in being dedicated to one real person. It’s got those great rumbling couplets of galloping blues thunder. “Thump on the Bible, proclaim a creed!” And then Dylan talks about how he didn’t play guitar behind his head (like Jimi Hendrix, we assume). Is he talking as Reed or as Dylan? Whatever, both. “I can’t sing a song that I don’t understand.” “I can’t play the record because my needle got stuck.” And then he’s sucking out the juice from some grapes that have something to do with a transparent woman and a noose. The Blues just got real. “Can’t you hear me calling for you down in Virginia?” And there’s that harmonica. Almost. Just a little tease. Dylan, you Dylan.

“Mother of Muses” is pretty and reminds me of the church hymns of the 1800s except for the little tricky chords that seem to surprise Dylan as much as us. I want to hear Tom Waits sing this song. With Bob Dylan. And Nick Cave. If Johnny Cash was still alive, that’d be nice, too. “Forge my identity from the inside out, you know what I’m talkin’ about.”

And now he’s “Crossing the Rubicon.” I told you this was going to happen. So did he, when he said “What would Julius Caesar do?” He painted his wagon ABANDON ALL HOPE and crossed the Red River—Dante meets Dylan’s own “Red River Shore,” one of my personal favorite non-album recent Dylan songs (to be found on the Tell-Tell Signs “bootleg” compilation from 2008). I don’t usually love all the flat-out blues songs on a Dylan album, except maybe on Love and Theft. But the three on this one are really good. I can barely remember 2012’s Tempest anymore, except for that really long Titanic movie recap and that it had some rough blues songs on it that were listenable but not sticky like these babies— and I liked that album, too! But it doesn’t hold a candle to this one, sorry. No, not sorry.

“Key West” is the last song before the monumental “Murder Most Foul.” “Key West” is going to grow on me. It already is, like a fine moss. The line about the pirate radio station in Budapest. The accordion, the soft backing vocal, the Kerouac reference. Damn, all right, I get it now. It’s really good, too. “Such is life, such is happiness.” That tinsel-twirling electric guitar. I’m in a whirlpool. “It’s hot down here.” It’s like he’s drinking my soul out of a Mai Tai glass but I’m getting filled up with the sun at the same time. I should be talking about how his music relates to the great flow of American popular music. I can’t. I’m feeling too emotional. He eats gumbo, he does Hindu rituals. Sometimes he says words that sound like “bokatoobagooma” instead of real words. Key West makes me think about Tennessee Williams. Hemingway. “Key West is the land of light.” And Bob Dylan was forced into a suit and forced to marry a prostitute when he was 12, he sings. “That’s [his] story, but that’s not how it ends. She’s still cute, and [they’re] still friends.” He’s so good. Whatever anyone ever said, if they ever did. He really is that good.

And “Murder Most Foul.” Really, everybody else wrote about that one first and over and over again. It’s very long. I’m not only not ready to write about it; I don’t want to, maybe ever. Go read what someone else said, or just go listen to it. I’m still in Key West.

I’ve been writing this while listening to the album all the way through for the second time. I don’t know if you could tell. I’m going to keep listening to it over and over again. If you’re as into Bob Dylan as I am, especially the Dylan of the 1996 Time Out of Mind revelation onwards, you will, too. 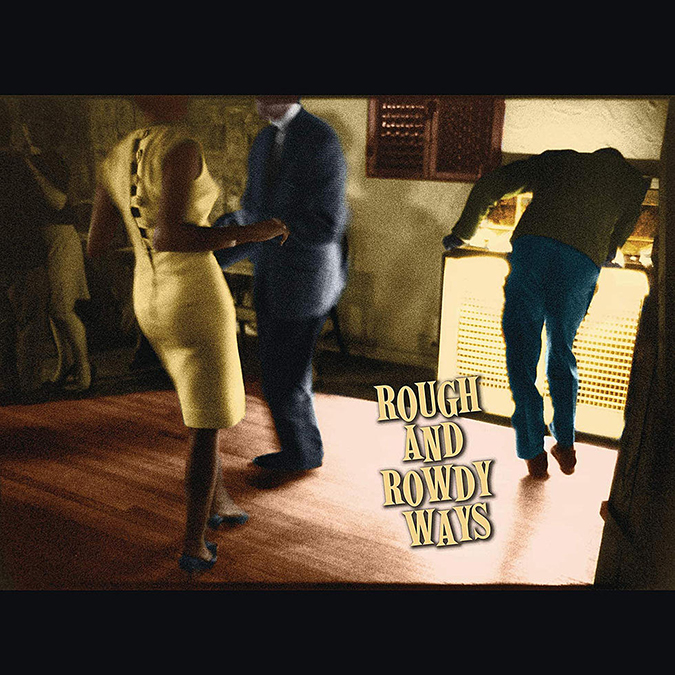 Jim Knable is a playwright, songwriter, and writer of cultural articles and fiction. He has written theater articles for The Brooklyn Rail (most recently a dialogue with Lucas Hnath), film and music reviews and commentary for NewsWhistle (most recently about Elvis Costello & the Imposters at the Forest Hills Stadium) and Frontier Psychiatrist, interviewed prominent directors and sound designers for the Stage Directors and Choreographers Journal, and interviewed the winners of the 2018 Frederick Douglas Book Prize for a Medium article posted by the Gilder Lehrman Institute of American History. His band The Randy Bandits released three studio albums and one live album while playing the best venues for local acts in NYC (Rockwood, Knitting Factory, Union Hall, The Bell House, etc.) and has a new album coming in 2020. His plays have been produced at MCC Theater, Soho Rep, Woolly Mammoth Theatre, and Target Margin; published by Samuel French and Broadway Play Publishing. He lives in Brooklyn with his wife and sons.