Betsy Crapps (above) is a mother of three and the director of family and children faith formation programs at her church, taking care of the religious education for hundreds of kids in her community. So she’s a pretty busy person. She manages to have a lot of fun in her spare time, though, and to do some rather amazing good work at the very same time.

Since she’s in the cold Midwest and I’m in the cold Northeast this winter, we caught up on the telephone and she told me all about a project that’s dear to her heart, and brings a great time to all of its participants each year…and it gives us yet another reason to look forward to spring!  It’s the Mom Prom!

A prom, for readers unfamiliar with this United States tradition, is a formal dance for high school students.  You can read about proms here.  Or just watch Footloose or Pretty in Pink.

Here’s what Betsy had to say…

I got the idea in 2005. My mom was selling our family home, and brought my prom dresses over. I thought, “What I am going to do with that?” She thought my daughter would have fun playing dress up (she was in kindergarten at the time). And she did play with a hoop skirt on one of them. Each year I go to an Oscar party, and we usually wear PJs and sweats, but I decided to go with my 1987 prom dress. So, I told my friend, and she wore a bridesmaid dress, and it was hilarious. And we talked about the dresses, and memories, and I thought that we should have a “mom prom” and dinner and dancing.

The first year, it was twelve of us at a restaurant and a bar…all wearing ridiculous gowns. At the restaurant, people were taking our pictures, including the band that was playing, and then later, I was on a Girl Scout camping trip when the Detroit News heard about Mom Prom and called! We made the features section of the Detroit News! The headline was “Mom Prom puts ghastly gowns to good use!”

So when I saw the “good use” part, I realized we weren’t the only people who thought this was funny. I asked my priest if we could use the church gym, asked a friend who was a DJ to help, and in 2007, this time it was 80 women. I charged $10, and we gave $800 to a homeless shelter. It was just awesome. My brother helped me make a website, and a woman in Seattle saw it, and started her own Mom Prom…she did it to raise money to help fight post-partum depression. It grew each year, and in 2011 the Associated Press came to cover us. The reporter told us he’d release it at Tuesday at 6:00 a.m. When I got to work later that morning, my sister called me…and said it was in all the newspapers, all over the country and in 77 countries. One of my friends’ husbands saw his wife in the paper in France! It was a crazy day at work, the CBS Early Show called, and Good Morning America, and later in the day I screamed…there was an email from Harper Studios! We thought it was Oprah! (It ended up being Gayle King…we never did get Oprah.)

Have you trademarked the name?

I own the trademark now for Mom Prom, but I don’t charge for it. I send info for people who are interested on how to start their own, and I have to approve the charity. It’s generally fine, there’s been a lot of great charities, like Relay for Life. One year, a group raised money for a special needs bike for a girl who needed one (it cost $5,000).

There have been Mom Proms in 32 states, usually about 50 a year. I sometimes hear about them after the fact, and then we get an apologetic call or phone call.

Do you get upset about that?

No! I want women to raise money for charities that are close to their hearts. We do a different one every year. For a while we rented a banquet hall, but that got too expensive, so we’re back in the church. We now raise money for the Society of St. Vincent de Paul, and a local food bank. My sister raises money for breast cancer research in New Hampshire. 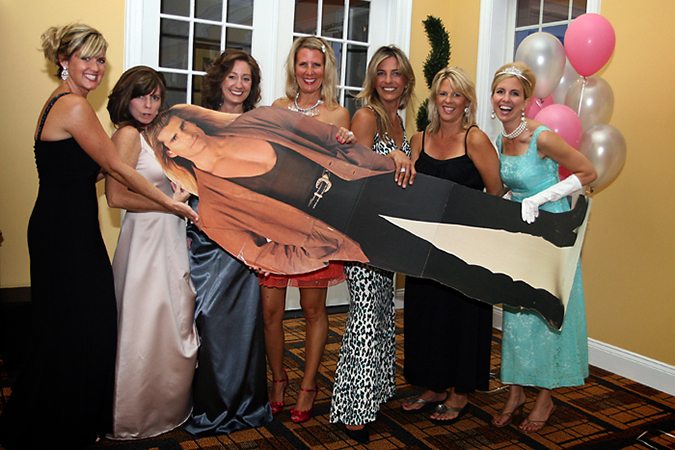 Was it fun getting all that publicity?

One of my favorite interviews was Fox and Friends in New York, and my sister and my mom came. And also being on Good Morning America.

Good Morning America actually told us to get the trademark. The reporter there told me to go on Legal Zoom and just do it right now. Before 6 million people viewed us!

Can women who are not moms participate?

The Mom Prom is not just for moms, it’s for all women over 21…we do serve alcohol.

No men, but we do have life size photos of celebrities to take our pictures with! Our biggest prizes are for the tackiest dress and the best Aqua Net hair. We do a game to crown the new Prom Queen…choose names randomly, and then they play a dice came, and we elect our queen. No drama from high school, but just fun.   It’s also a three-hour workout…our legs hurt the next day from the dancing, and our faces hurt from so much laughing!

So why not invite your husbands?

Well, mine doesn’t want to dance! And this way the dads can babysit, and we have fun with our girlfriends.

Sometimes people have included men, but it’s really meant to be a ladies night out. 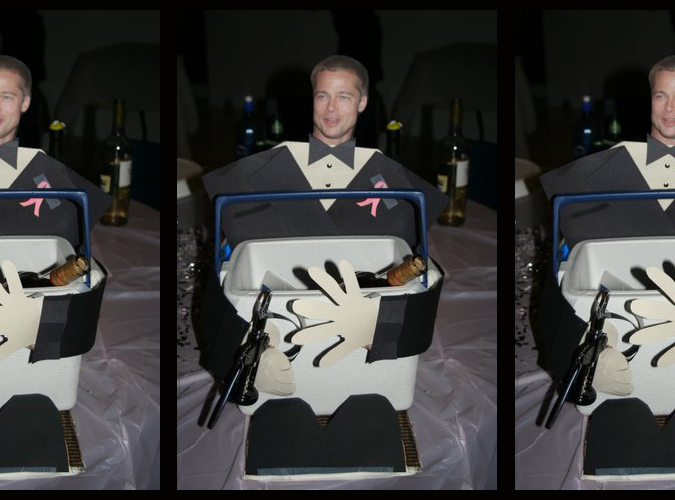 So very Brad to see you!

How many Mom Proms have there been so far?

Can you use some dresses?   A friend of mine and I collected (for an alumni club service project) a whole bunch of prom, formal, and bridesmaid dresses for a group called Operation Fairy Dust some years back…they provided them to high school students who couldn’t afford to buy prom dresses. I’m glad we got a chance to reuse them (and I had a lot of fun trying them on again). I wore one on Halloween one year, actually.

Our dresses are so old and ugly that no one wants to wear them! So, we’re not collecting the gowns…people just supply their own. Sometimes people go with rather unique looks. No one wants these dresses!   You can get all kinds of things on ebay or at Goodwill. 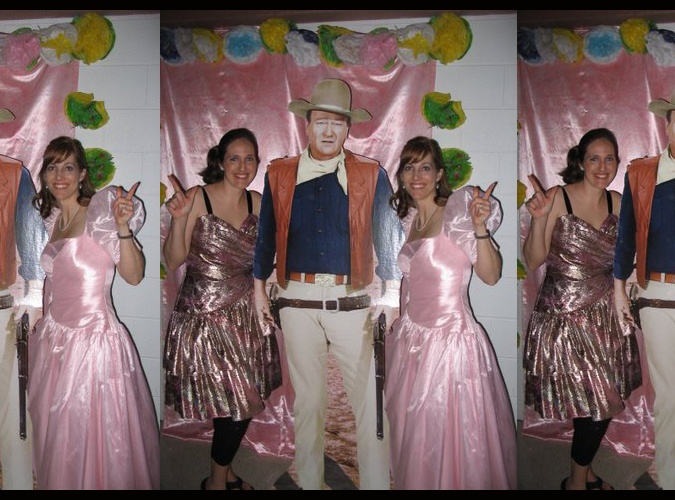 I’m impressed that you can still fit into your prom dress!

I still can, but it’s okay if you can’t. One woman had two dresses she couldn’t fit into any more, so she sewed them together and wore that! And other times women wear a tank top under an old dress, and just pull up the zipper as far as it will go…

So there’s no vanity in the mom prom?

What other kinds of charities have you helped so far with these events?

People have been fantastic donating stuff…The Detroit Lions coach signed a ball for us, and the University of Michigan football coach, and we’ve done silent auctions to raise more money at the events.

Do you have any particularly good or touching stories about the events or how they helped?

Oh, there’s a kid named Max who had brain cancer and he organized something called Max Your Brain to raise money for brain cancer research to give back to help kids like him. It’s just amazing.

What have been your best and worst experiences with the Mom Prom project?

The best has been hearing the stories from women. It’s amazing how many women have kids who are sick, and who have raised money to help find a cure for their child. One woman in Massachusetts is raising money for pediatric brain research…her kid has cancer, and is being treated at St. Jude. It’s awesome.

The worst…one year (2011) because of scheduling issues, we couldn’t have it in the spring. So we planned it for February. There was a threat of a storm. 8 inches of snow were expected, but it was only 2 inches and it was a great night.

If that was the worst, that doesn’t sound so bad! What a tremendously positive experience. What was the funniest thing that’s happened?

One lady came in once…she was in her late 20s and brought her bachelorette party. The thing was, though, she was going to the convent and was marrying Jesus. So her friends gave her a bachelorette party. They were a really rowdy group of girls, her friends. That’s usual. And hilarious. But no one believed me when I told them the story, they all thought I was joking! They danced all night and drank wine and had a great night. And then she became a nun. This was in 2010, I think.

She had quite a sendoff! On a more personal note, what’s the best advice you’ve been given?

My grandmother told me to marry my best friend. She told me this when I was a teenager. And I did. So that worked out really well.

That’s terrific. Do you have a book recommendation for our readers?

You know, I just finished reading a book called Waiting for Eli. It’s about a family who discover that they’re about to have a child with spinal bifida, and it’s about their prayer life.

That sounds so sad.

It’s not though, it inspires you to have a great prayer life. I work in a church, though!

How about a movie?

One of my favorites is Elf. I could watch that a hundred times! We watch it every year.

My dad passed away when I was 28…I would go back and talk to him and find out more about him. After he died, I found out that he hunted down Russian spies working for the CID. I found this out a few years ago…I’d love to talk to him more about what he did. Although, you know what, if I could go back in time, I’d love to go back far enough to hang out with Jesus and Mary and see all that. Can you tell I work at a Catholic church?

I talk a lot. Everyone knows pretty much everything. I feel like I’m an open book. My friends know so much about me!

You know what, I really do not like heights when I’m close to an edge; it makes me really nervous.

I really like Alan Alda. He reminds me of my dad. He looks like him, so when I see him I have a smile on my face.

What’s the funniest or worst thing that happened to you this week?

My birthday was Monday, and my coworker said she needed to talk to the kids in our program about a coat drive…and then she had all the kids (250 of them) sing happy birthday to me.

Awww, that’s so sweet! Happy birthday! And last, but not least, is there anything you want to pitch, promote, or discuss?

Mom Prom! Check out the website. I really want women to be part of this. If there’s a charity close to your heart, it’s a great way to raise money, and it’s not too difficult. And if you can’t get a facility and organize a party, just get your friends together and go out to dinner and dance and have fun. And then match the funds you spend on yourself with your favorite charity. 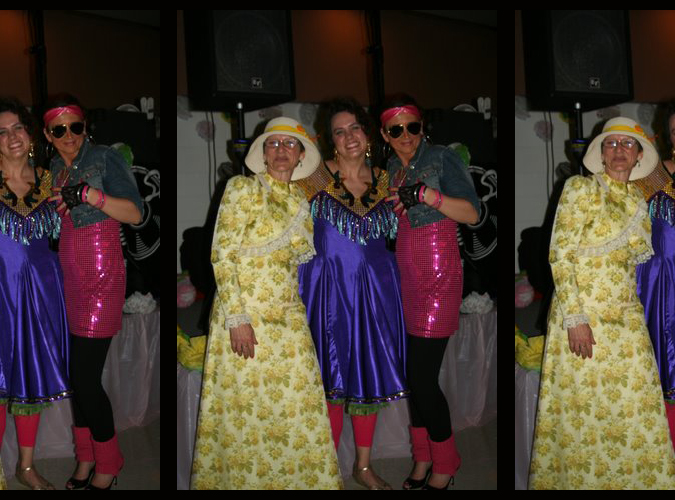