Are you one of those people that love the idea of India but just can’t do it? You love the food, you want to explore the culture, you want to see the Taj Mahal, the ultimate doomsday temple of love, and you long to be fed by servants galore…

But you just can’t do it. The whole idea of India is just too excessive for you. You don’t like the crowds. The aroma is overpowering and bordering on being called smells. The service is so indulgent, it accentuates the faces of the beggars outside the gates you just ignored. You don’t like poverty in your face, juxtaposed against the grandest luxury and opulence you may ever see – without even a hint of civility that sometimes glimmers through the opulence of China or even peasant-based Russia. Then, Sri Lanka is for you.

Sri Lanka can be happy, calm, content, and civil–a belly-full version of India. Other than maybe around the train station of Kandy, you will not see beggars, and you will definitely not see child beggars à la Slumdog Millionaire with their eyes gouged out. You don’t need to feel bad as you decide to take the gondola option from the Lake Palace Hotel to your hotel and leave the driver that has been waiting for four hours behind. Things just don’t work that way in Sri Lanka, and the class divide is not so severe.

In Sri Lanka, bellies are full, food is plentiful, and anyone that is hungry is welcome to pluck a mango off the trees that dot the streets and are in every home’s courtyard. If indeed a stranger does not pluck and enjoy your mango, who will consume them?  Surely, they will just go to waste in the gutter!

So this is what you do.

First you land in Colombo, the gateway to Sri Lanka. You can spend some time there if you want, and like any major city it will have the best restaurants, shopping, and living quarters – if you are actually going to live there. If you are visiting, and are trying to get the most out of a wonderful country – act like the Dutchman. What does that mean? You need one night’s accommodation in Colombo – most of the flights are set up to land around midnight anyway -– and the next morning you enjoy a local breakfast and promptly set out on an adventure.

We stayed at the Colombo Swimming Club  – a historic private club from the old British colonial days that was in the midst of losing its privilege when we were visiting due to the government’s exercise of eminent domain. The unfortunate circumstance was forcing the club to move its legendary swimming pool dead center in front of the club facing the sea to its side. And the club was losing a part of its beachfront to a new highway that was being constructed. Gauging by the old photos adorning the colonnaded halls of the club, this was quite a pity. But despite the swimming pool of the Swimming Club not being available, the overnight stay was a delight with very helpful staff and a wonderful Sri Lankan curry breakfast served in the main courtyard in the morning. And as soon as we were fed we were ready to head towards the beach town of Tangalle. The club called us a trustworthy cab with a standard flat fare. 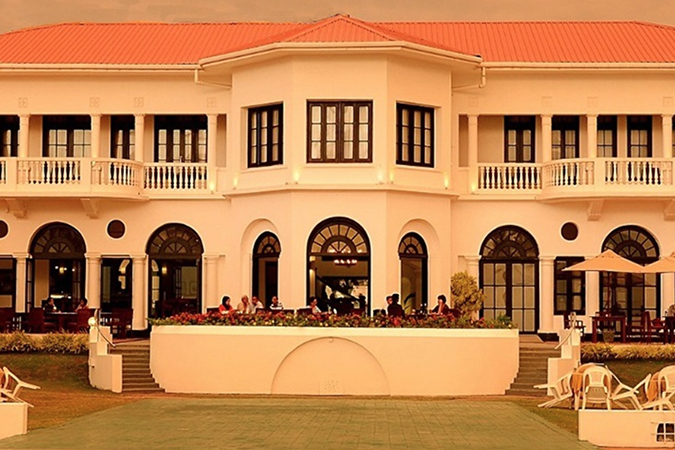 Tangalle is a little bit further away from Colombo than the more visited Mirissa, and I would say that much better. It is interesting how one may fly 24 hours to get to the teardrop island, but then decide that Mirissa beach one hour away is accessible but Tangalle beach two hours away is just too far!!!

After significant research we found ourselves at the Last House,  a Geoffrey Bawa – the father of what is known globally today as tropical modernism – architected villa complex. Geoffrey Bawa developed an architecture that was a blend of both modern and traditional, of east and west, of formal and picturesque, that broke down the barriers between inside and outside, between building and landscape, and that offered a blueprint for new ways to live and work in a tropical city. [From his obituary in the Guardian 2003].

Not only was every room in this five-room compound an absolute delight, but every lounge spot, sitting nook, and window view was a picture-perfect picture frame. You dared not move a chair or bed aside or askew as you would ruin the intentionality of the setting.

We stayed in Moonamal, a separate bungalow on the ground floor with large wooden doors and shuttered windows opening onto the ocean-side courtyard. Towards the back courtyard there was an oversized bathtub in a room with no roof, so as  to gaze onto the moon and the stars peeking through the canopy of flowering tree branches while you bathed.

Furthermore, from the several chaise lounges that are perfectly situated on the lawn under the frangipani trees, you had but a glimpse of the raw Indian Ocean, only accessible through a small little gate. And you wondered if this was the gate to Paradise or the gate leaving Paradise.

I pondered this question every day as I tried to decide whether to stay in the tranquility of the villa or venture out to explore the seaside.

I also wondered whether Bawa loved or hated the ocean. The ocean is only incorporated into his architecture visually, and not physically. A way to control the environment and reduce them into a series of indoor outdoor rooms. In the end, I imagined Bawa wishing to tame the Indian Ocean through his lens.

The Last House; Courtesy of NewsWhistle 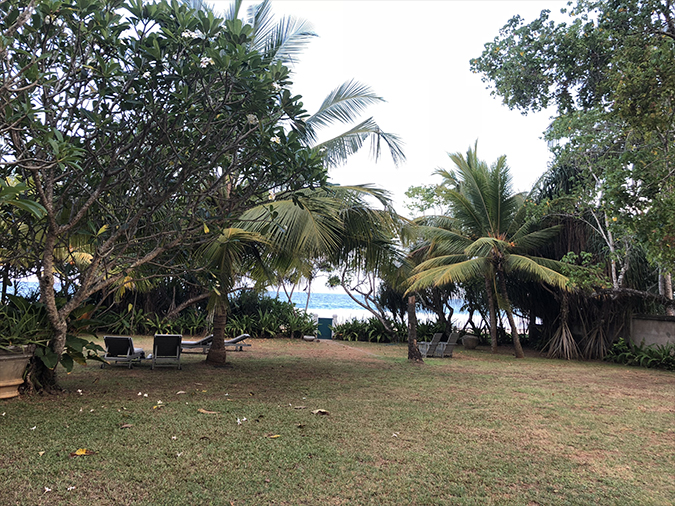 The Last House; Courtesy of NewsWhistle 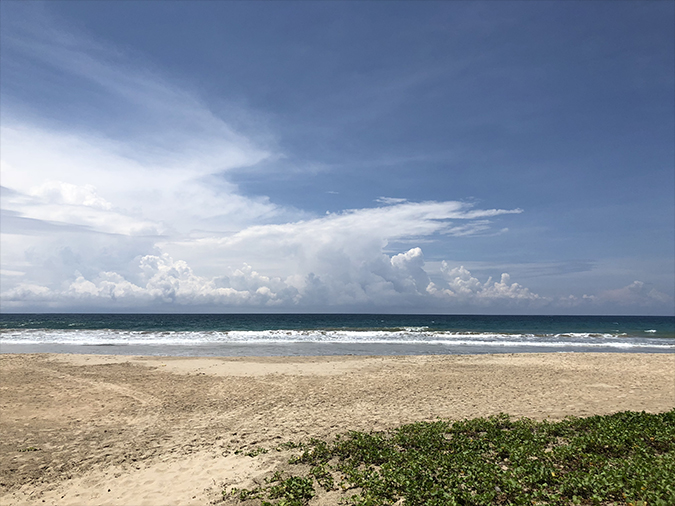 Beyond the amazing architecture – which pictures just do not do justice – and being situated on a quiet crescent of a magnificent beach barely shared with neighbors, our trip was made ever more special because of the hotel’s hospitality. The manager is also the chef, and upon request, will cook you Sri Lankan fish curry using his mother’s recipe. I wouldn’t do Tangalle any other way.

After that you go to Galle. This is a UNESCO heritage site town that has all the gemstone stores you ever need to see. Forget about the factory-direct or other sources in Mirissa or along the beaches. If you are looking for the famous Ceylon sapphires you want to be in Galle. And you want to be on the main drag called Church Street, not the touristy waterfront Hospital Street which seems to charge multiples of Church Street.

In this UNESCO heritage site town, we stayed at a UNESCO Award of Distinction for Heritage Conservation-winning property, the Galle Forte Hotel. Several years before we had stayed at a gorgeously renovated boutique hotel in Georgetown, Penang, Malaysia, and read about its sister property in Sri Lanka that was restored by the same former-banker-turned-architect. Ever since then Sri Lanka was on the list, and before we decided on any other part of the itinerary we had anchored down a reservation at the Galle Fort Hotel. 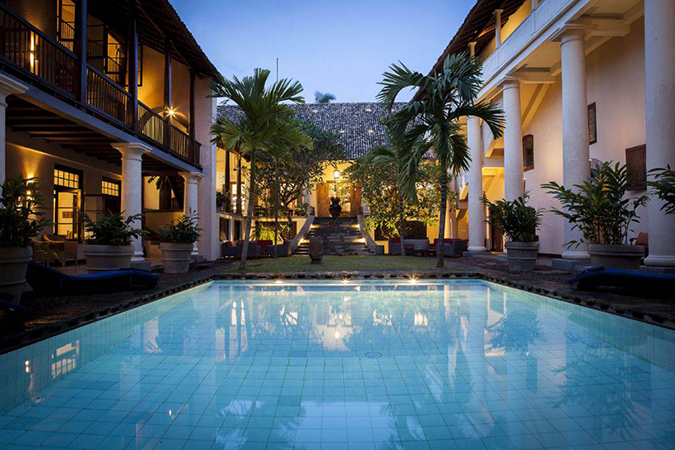 I could drone forever on about the beauty of the property, the friendly staff, the gorgeous bar area, as well as the front porch whereby to sip your cocktails. But the beauty of Galle and the Galle Fort Hotel was eclipsed by what happened the next morning, truly the highlight of the trip. The seaplane!

We woke up very early and took a pre-arranged car service to get back to Colombo. We arrived at Water’s Edge, a fancy rich locals’ private club where you go to eat, walk, swim, exercise and play golf, or, take a seaplane! The seaplane operated by Cinnamon Air lands and takes off from the reservoir within the Water’s Edge property stopping mere minutes to pick passengers up. Experienced locals arrive right before the flight and get on with no other luggage than a briefcase as if they were stepping onto a scheduled bus. We were a little bit more excited about the overall experience as we started video-taping the landing of the seaplane, our climbing in, and then practically the entire journey from up above. The landscape changed from the city to mountain, as we climbed up towards Kandy and the tea plantations. The dramatic change within minutes was absolutely breathtaking, and probably takes the cake for the most luxurious experience for less than $200! 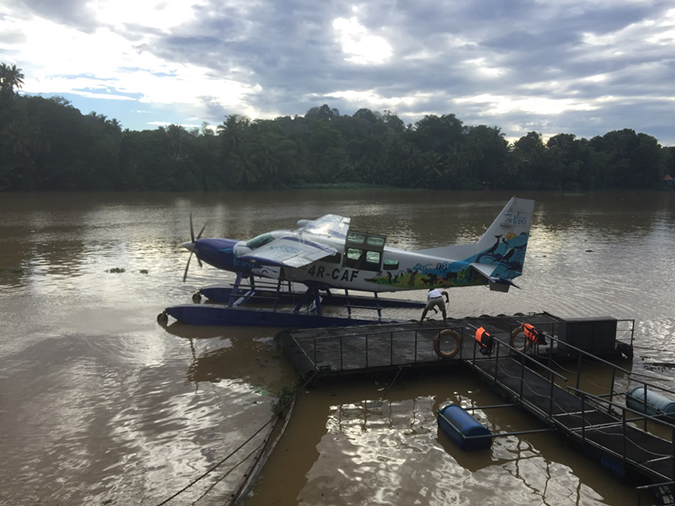 Seaplane in Kandy; Courtesy of NewsWhistle

Walking into the Madulkelle Tea & Eco Lodge was one of those moments that makes your heart stop. And then there were several more such moments throughout the next 24 hours. At Madulkelle you are high up on the mountaintops, and if it is at all possible, above all weather. You see the clouds below you, rain showers coming towards you, and rainbows at your feet. The sunset turns magenta pink so close you reach out to see if you can touch it. The climate changes more than a dozen times a day, as if each day is a year, if you were to be on earth. You get spa treatments in open air pavilions where you feel you are floating. You settle in and wake up in your luxury safari tent, and you can’t imagine there is a single other soul around you. 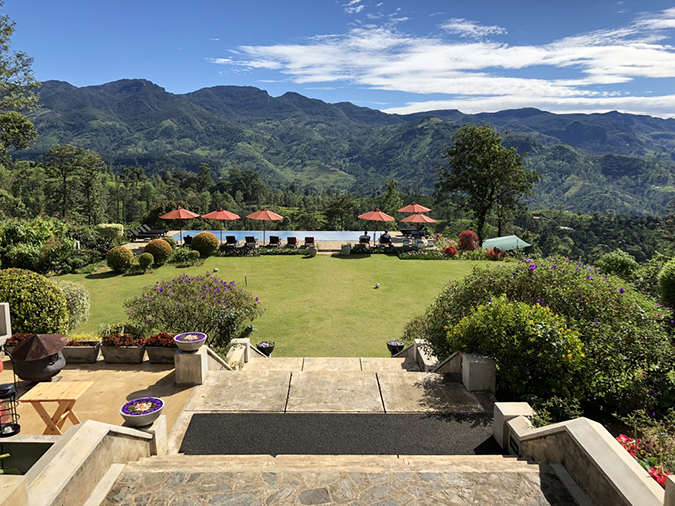 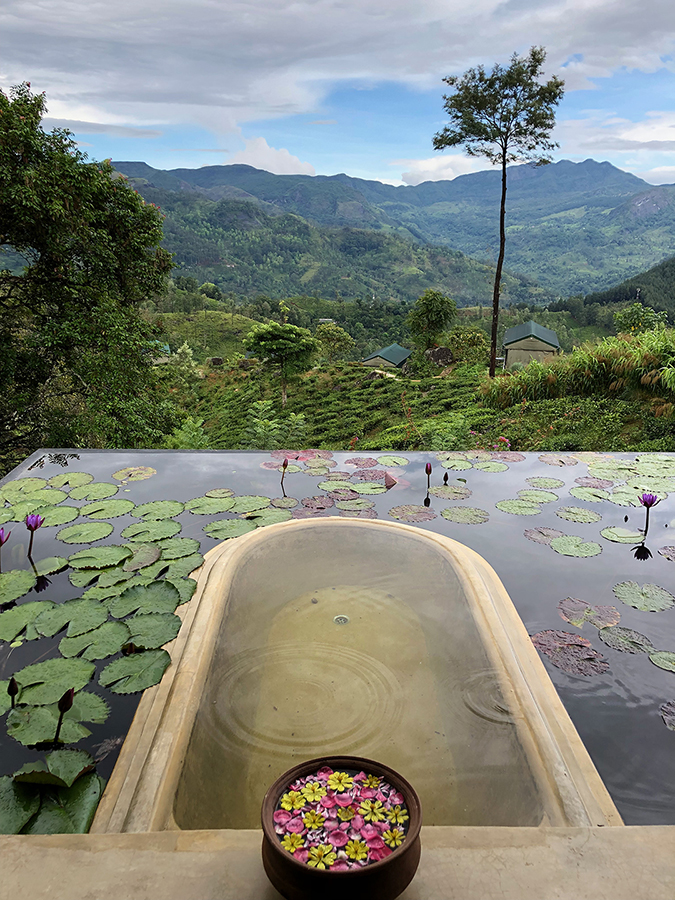 Leaving Madulkelle Tea & Eco Lodge is only acceptable because you are already planning your next trip back to Sri Lanka. Exactly as it was done this time. 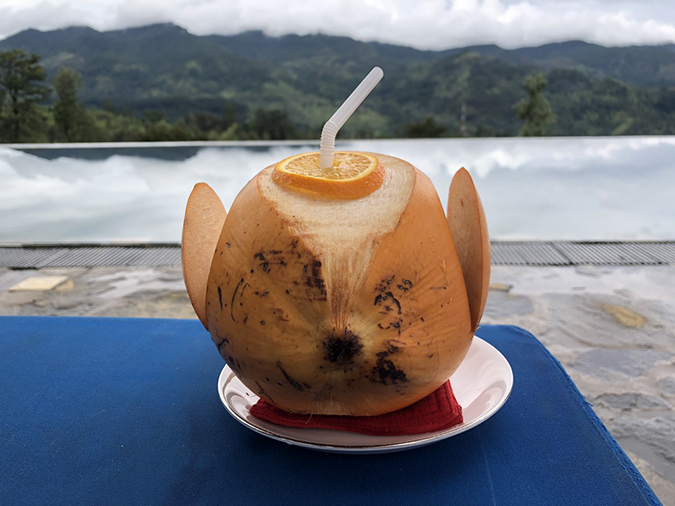