The first weekend of May, otherwise known as the kickoff to the summer movie season in North America—otherwise known as Marvel’s $168M+ payday—has gotten the season off to a blazing start over the last five years, with the opening film averaging an otherworldly $168.4M in its debut, and usually going on to be one of the top films of the summer.

Makes sense then, that other studios don’t even try to compete on the same weekend, and even the following weekend is now reserved for counter-programming, as we saw last week with “Money Monster” and “The Darkness” which bowed down to “Captain America: Civil War” with ho-hum grosses of $14M and $5M respectively.

It’s sort of a downer after getting pumped up for that first weekend, but luckily this weekend we have three new films flickering in cinemas, a little something for everyone–nice things, angry things and neighborly things.

Sony’s “The Angry Birds Movie” is the first of its kind: a video game ad-APP-tation. We all know the history of video game adaptations—and it has not been kind, especially animated ones.

In fact, just a couple weeks ago “Ratchet & Clank” totally tanked, debuting with an embarrassing $4.8M. As it stands, Focus Features’ toon hasn’t even collected $10M in total.

That’s about as bad as it gets. Oh, wait, at least Sony didn’t spend $137M to make “The Angry Birds Movie,” like they did (with Square Pictures) when they released the most infamous video game flop of all-time, “Final Fantasy: The Spirits Within.”

Well, 15 years is probably enough of a moratorium for the beleaguered studio, and wisely, they kept the budget tidy at $75M this time. Rovio, the game design company, has stated they want to compete with the likes of Disney, and while that’s the gold standard and certainly something to shoot for, the color of these birds isn’t close to those lofty standards just yet.

First of all, Rovio doesn’t have the swagger; they ruffled the feathers of reviewers with a middling 56% on Rotten Tomatoes.  Second of all, they’re dealing with a product that is a bit past its prime. Had this come out two years ago when people were fanatically playing the game, and at the peak of its pop culture prowess, this might have been a box office bonanza.

Still, with “The Jungle Book” entering its sixth weekend of release, there will be more than enough families with young children that will get their tickets punched. However, not the teens and college kids necessary to make this a crossover hit. In 3,700 theaters expect a gross of less than $40M.

Overseas, “The Angry Birds Movie” debuted with a solid $43M last weekend, and that, combined with the mass merchandising—yes, the birds are camped out in Happy Meals around the world—the real focus becomes clear: sequels and merch.

Sure, the first installment might not deliver blockbuster-type summer grosses, but if it hits over $300M worldwide and sells tons of toys, you can bet the henhouse that we’ll see a flock of follow-ups and, in a word, franchise. That’s what it’s all about these days. This might not be the next “Shrek,” but possibly the next “Alvin and the Chipmunks.”

As far as attracting the multiplex masses, Universal went with a thong draped over a fence to sell their sequel. Hey, they know sex still sells. Especially sorority sex. 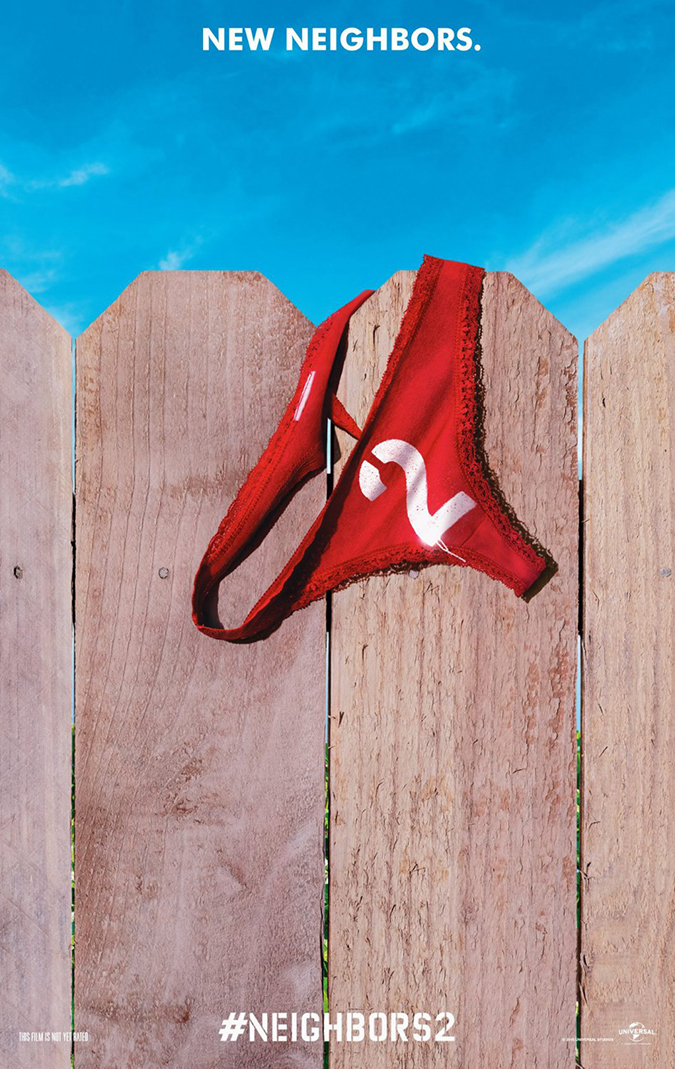 “Neighbors” was such a huge success for Universal, that they wasted no time getting the gang back together for another box office bang. It was just two years ago that the original tore the roof off multiplexes with a dizzying $49M debut, $150M domestic and $270M globally…on a budget of just $18M.

Let’s face it, Universal will sequelize anything with a perceived pulse—“The Huntsman: Winter’s War” anyone—so it’s no surprise they jumped on this so quickly. And, to be fair, reviews have been pretty positive—66% on Rotten Tomatoes—so it should have no problem tapping into audiences looking for lewd and crude laughs.

Look for upwards of $40M from “Neighbors 2,” matching its budget, and while that seems like a steep drop-off, consider the fact that Warner’s “The Nice Guys” will be cutting into their haul, as Shane Black’s comedy crime caper is receiving outstanding reviews and…well…Ryan Gosling.

Probably should have opened “Sorority Rising” last weekend, the same time the first one opened, which knocked off “The Amazing Spider-Man 2” in its second weekend.

While it won’t top the box office charts this weekend, prepare for a long ride for “The Nice Guys,” starring Gosling and Russell Crowe. The $50M production might be this summer’s “Mad Max: Fury Road,” in terms of likability.

Infused with high caliber wordplay and great chemistry, the 70s-themed R-rated flick should see an opening of $20M+ with the possibility of more as word of mouth travels. Black (“Iron Man 3,” “The Long Kiss Goodnight”) seems to be hitting full stride as a Hollywood maven, infusing his vast screenwriting talents with audience awareness—making a personal film that is also commercial. Not an easy task.

In limited release last weekend, A24’s “The Lobster,” starring Colin Farrell and Rachel Weitz, had the best arthouse opening of 2016–$190,252 in 4 theaters, $47,563 per. Look for a solid expansion this weekend as the R-rated dramedy offers up a perplexing scenario: if you can’t find love in 45 days, you will be relegated to becoming an animal of your choice. Farrell chooses a lobster. Fun stuff, full of ingenuity and imagination of the highest degree. Seek this out.

While summer is all about the circus coming to cinemas—tentpoles and big top box office—there is always room for sideshow gems playing just outside the three-ring film festival that runs from the beginning of May through Labor Day.

Here’s some potential indie sleepers that might make blockbuster Armageddon bearable, if high-octane explosions, Roman numerals and men (and some women) in spandex isn’t your jam.

Matt Ross, of “Silicon Valley” fame (he brilliantly plays Hooli honcho, Gavin Belson), writes and directs what looks like the gem of the summer here. Viggo Mortensen stars in the modern day “Mosquito Coast,” you know, only funnier and set in the Pacific Northwest. Off the grid, is the new off the hook.

A true foreign film. Imagine that. This Japanese dramedy comes from Hirokazu Koreeda (“Still Walking,” “Like Father, Like Son”) Yes, there will be subtitles.

The sci-fi romance drama…never works at the box office, but man, does this looks good. Remember when Michael Bay tried it with “The Island?” That’s still the lowest grossing domestic film of his career with $35M. A24 would be overjoyed with a gross like that. They scored once with “Ex Machina” last summer…can they do it again?

It wouldn’t be summer without another film from Woody Allen. This one is right up his alley, set in 1930s Hollywood, with Jesse Eisenberg as Allen’s alter-ego.

Not everyone growing up in Cleveland is going to be LeBron James.  This is that story. The other coming-of-age story. Great soundtrack.