It’s been a busy holiday season for Minneapolis’s own Sonny Knight and The Lakers. NewsWhistle has been big fans of the band for some time now, and every time we drop the needle on I’m Still Here or Do It Live, it’s like coming home.

Just before Christmas, SK&TL wrapped up a two night, four show stint at Minneapolis’s Dakota Jazz Club. They did the same thing last December, and we’re all hoping they do it again in 2016 because the band absolutely killed it at the show I saw (late show, 12.19.15). 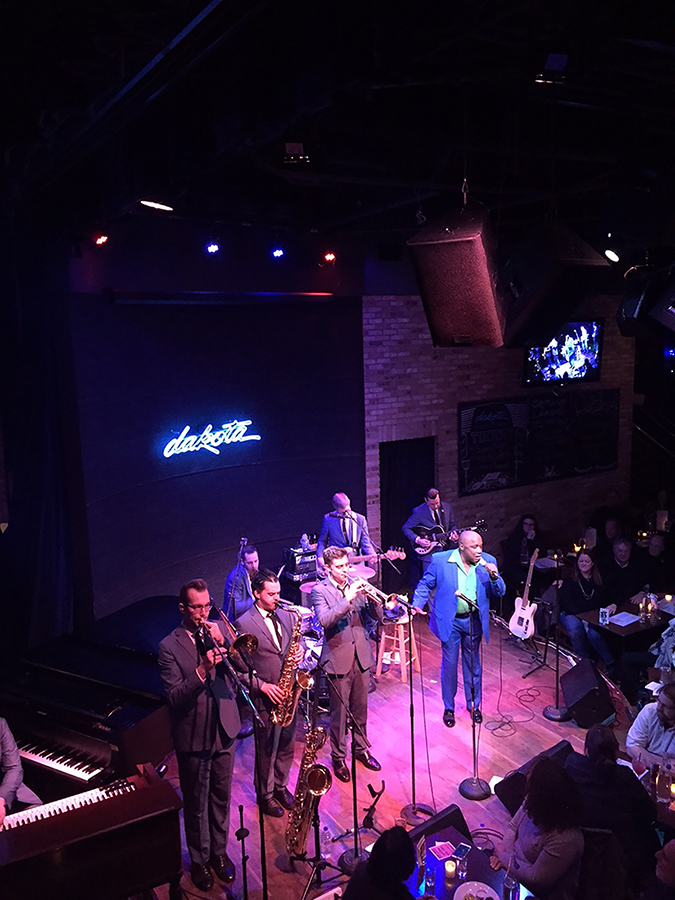 SK&TL took the Dakota stage in a way that should be unsurprising, but still felt fresh in 2015. The Lakers were in uniform, which is to say, matching silver suits. Trumpet player/hype man Riley Helgeson whipped the crowd up with his spirited introduction of the star of the show, Sonny Knight. Sonny was looking natty in blue and lime green, and not a little bit like a peacock on the prowl, which, I suppose, was the point.

They opened with “Caveman” off of I’m Still Here, and ripped the joint wide open. If you are at all familiar with SK&TL, this shouldn’t be a surprise.

Still, the evening wasn’t all fire and heroics. There were plenty of slower, more tender moments throughout. In fact, both the band and Sonny really shined during these songs.

SK&TL served up I’m Still Here songs, new songs, and some covers, with love, inspiration, and authenticity. Their cover of the Beatles’ “Day Tripper” was amazing. It was an extended, slow burn soul version, and when it eventually took off, it was most welcome.

There was a rumor that Sonny was feeling a little under the weather, but if he was sick it certainly didn’t show. He prowled the small stage, engaging the crowd and offering funny words of encouragement during the instrumental breakdowns.

During a cool call and response vocal moment, Sonny sang, “how about a little help over there,” gesturing to the bar. He followed up with the same request directly to my table (there was a VIP at the table – no, not me). 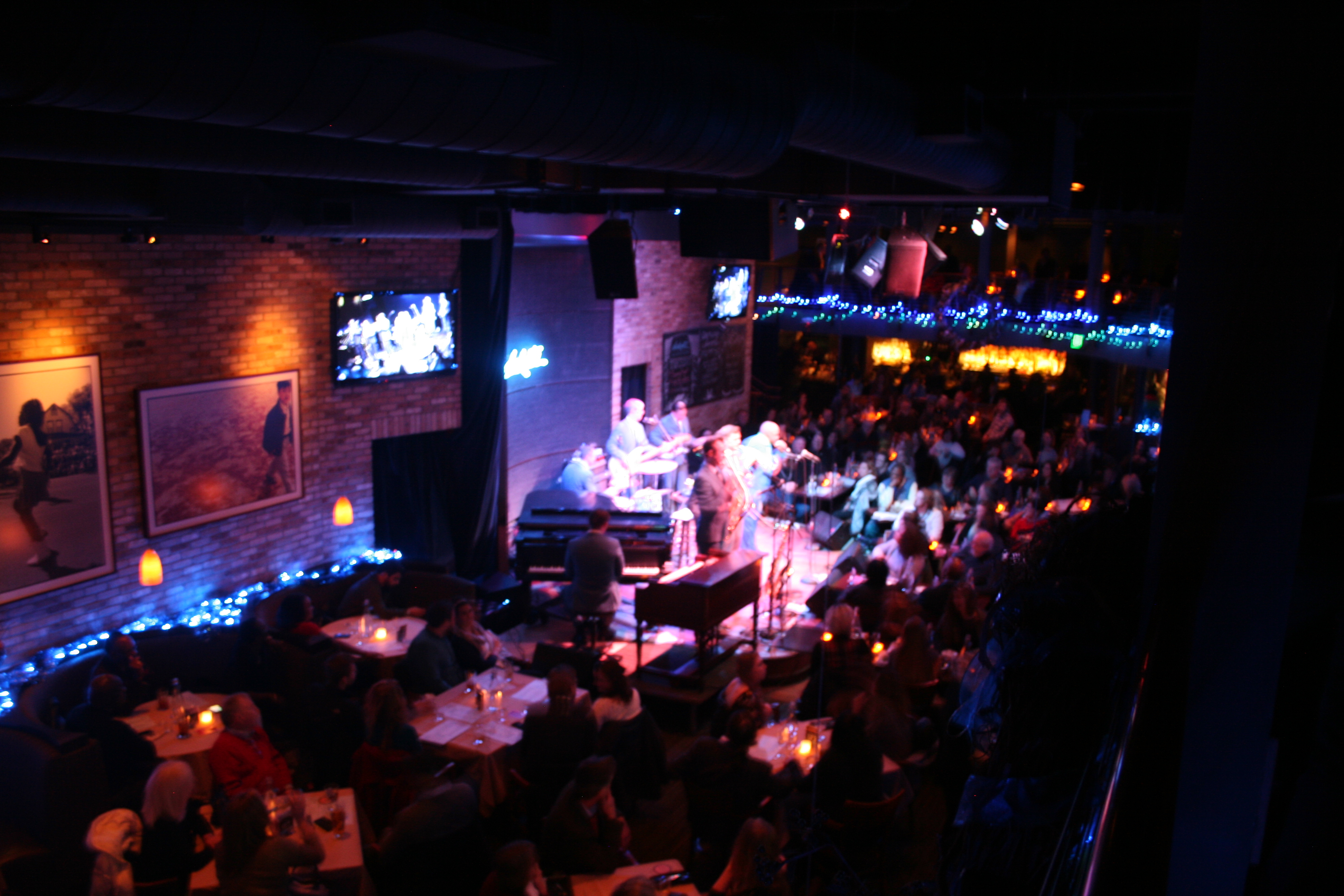 SK&TL served up crowd pleasers, like a growly version of “Juicy Lucy” and “Sugarman,” in the midst of a fair share of newer tracks, and from the response of the crowd, everyone was having a great time.

Once the show started, it didn’t stop. Songs morphed into other songs, and there was volume and crooning for a full two hours. All Lakers had the spotlight to themselves at various points in the evening, but unsurprisingly the sum of SK&TL is greater than the parts.

I think that is the point.

“The Lakers, y’all”, a sweaty Sonny Knight gestured to the band. The crowd ate it up. 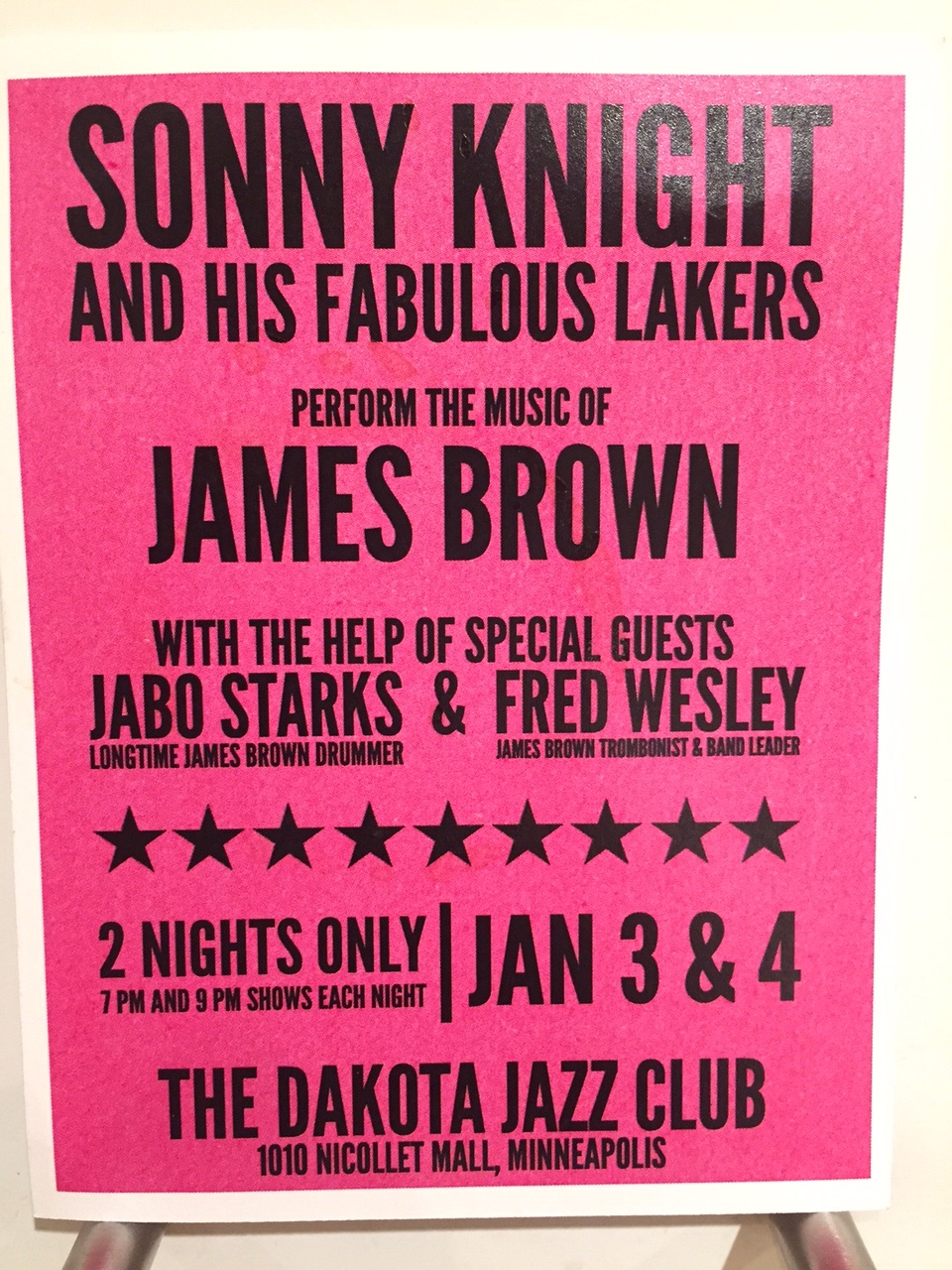 As it happens, SK&TL were to play the Dakota again on 1.3.16 and 1.4.16 for a special collection of shows honoring the late, great James Brown. As if Sonny singing James Brown, and the Lakers tearing up “Please, Please, Please” aren’t enough, there are some very special guests taking part in the celebration.

I was lucky enough to talk a bit with Eric Foss, who not only drums for and manages the Lakers, but is also vice president of sales and marketing for the Secret Stash record label. We talked about the evolution of the SK&TL live show, the upcoming James Brown tribute, and playing with some of your heroes.

Chad Werner: First of all, the show on the 19th was awesome.

EF: That was my favorite show of the whole batch.

CW: The Dakota is a cool room, too.

EF: It’s something that has sort of grown on us, I think. A little over a year ago, we started getting booked into rooms like that, and we were like, “yeah, we’ll do it. It seems cool,” but we were used to playing festivals and bars. It’s something that we have really learned to embrace. The show that you saw is, in my opinion, very different than the one recorded on [live album, recorded at the Dakota December 2014] Do It Live in the sense… not to sound like a music dick… that it is more dynamic. It gets a lot quieter and slower in places than the old show. A lot of that is the product of playing more listening rooms where you don’t have to necessarily tear peoples’ heads off for 90 minutes. It’s a space where you can explore more things, I think.

CW: Tell me how the James Brown shows came about. You’re playing with guys who actually played in James Brown’s band.

EF: Fred Wesley and Jabo Starks. Fred was the trombone player and band leader for quite a while, and Jabo was one of the drummers, who I believe was one of the longest standing members of the band. How this all came to be, I wish there was a more exciting story. It was literally some people at our agency saying, “Hey, we’ve done a bunch of these types of things where we pair people up. We should pair you up.” Through some sleuth work, I got in touch with their managers, and sent both of Sonny’s records, the studio and the live one, and I also sent them a bunch of the [Secret Stash] reissue work to convey to them that this stuff means a lot to us, and we will do it right. We wanted to show them how we do things over here, and that’s about it. It didn’t take much convincing or heavy negotiation.

EF: Two nights, two shows each. One 7 pm and one 9 pm. The coolest thing about doing this is spending time with guys who created this stuff. There is a tune that we are doing in the show called “There Was A Time” that I think, for me, is the epitome of live James Brown, of what that whole show was.

CW: Playing with your heroes has got to be exciting.

EF: Yeah, and I think there are certain people who might come to it, and their goal would be to kind of show off in front of these guys. No one in the Lakers has any interest in taking that approach. I’m coming at this thing, we all are, as fans. This is some of the greatest music ever, and we just want to do our best to respect it and recreate it in a tasteful, meaningful way.

How to mate. #algreen #soulmusic #vinylrecords

CW: Didn’t we talk about this before… Classic vs. vintage? It’s that idea, isn’t it? Respecting the music, and people who made it, and not trying to pile on a bunch of bullshit.

EF: Yup! It’s made it pretty fun so far in our rehearsals.

CW: What were these guys up to before this? Were they still playing?

EF: Oh yeah. Fred still tours a lot, and Jabo has a residency at a bar in Florida. I think he plays four nights a week. Pretty impressive. They still got it. I mean, these guys were in what I consider to be the best band in world. I completely mean that. It would be pretty sad if they weren’t still playing.

CW: Doubling on the trombone then for the shows? The drums, too?

EF: Good question. The bones of the show. We already have a trumpet, sax, and trombone player in the Lakers, but we will double up on trombone with Fred. The will be a lot of soloing and featuring of Fred as opposed to him being just another member of the horn line. As far as the drumming goes, you know James Brown toured with two drummers, sometimes even more? When it was Jabo and Clyde Stubblefield, they almost never played at the same time. One guy might hold a groove down while the other would do some big hits, so we are taking that approach. Jabo and I will be switching back and forth, and I might play second guitar when Jabo is playing because having a second guitar in this music is pretty dang cool.

CW: It sounds like a lot of planning and love went into this, and it sounds like it will be an amazing show. It’s another example of what you guys are doing at Secret Stash, respecting the music, and keeping it authentic.

EF: I appreciate that, and your excitement for it. I tend to agree. It’s cool that stuff like this keeps happening. It’s pretty easy to connect the dots from what we started doing by rereleasing music, to SK&TL, to what we are doing with Fred and Jabo. It all comes from the same place.

CW: Anything else going on with the Lakers?

EF: The James Brown shows are all-consuming right now, but we’ll be on the road again come spring. I think we are a few tunes short of a new album, but after these shows I am confident that we will wrap up a couple more new songs, because it is definitely time to do that.   We’re pumped about the new material that we do have, that we have been playing live. I’d say the show you saw the other night, close to half of that was new material. That’ll be the next thing, but right now we are really focused in on these upcoming shows.