If David Lynch ever reboots “Twin Peaks,” there’s no doubt all the production design would be done by Liz McGrath. Sometimes referred to as “Bloodbath” McGrath, it’s hard to nail down the spunky, bursting-with-energy LA-based artist, but that’s precisely what you’d expect from McGrath after seeing her majestically macabre creations.

Her artwork—which ranges from sculpture to plaques to drawings to dioramas—is sometimes referred to as lowbrow or pop surrealism. It has a haunting, maniacal feel to it, like something you might stumble across in a Trailer Park Twilight Zone or in the wonderfully warped Silly Symphonies toons from the early days of Disney if every character had multiple heads and appendages, and were oozing some kind of bodily secretion.

The liveliness of her work is what’s most engaging; as if her creations could will themselves into existence at any moment. If they do, hopefully there’ll be drop cloths nearby, as many of them are bleeding profusely.

Lifeblood runs through everything McGrath touches with her wand of weirdness. And it’s the creepiness, combined with the odd enchantment, which makes her art so vivid and searing; almost as if McGrath tore open a rift in an alternate dimension and is lulling these creatures into our world.

From punk-rocker to artist, from living in downtown LA to now moving to suburbia, all while balancing her passion with one of her biggest challenges, motherhood, McGrath chatted it up with NewsWhistle and shed some light on her sometimes dark and always fascinating inner life. 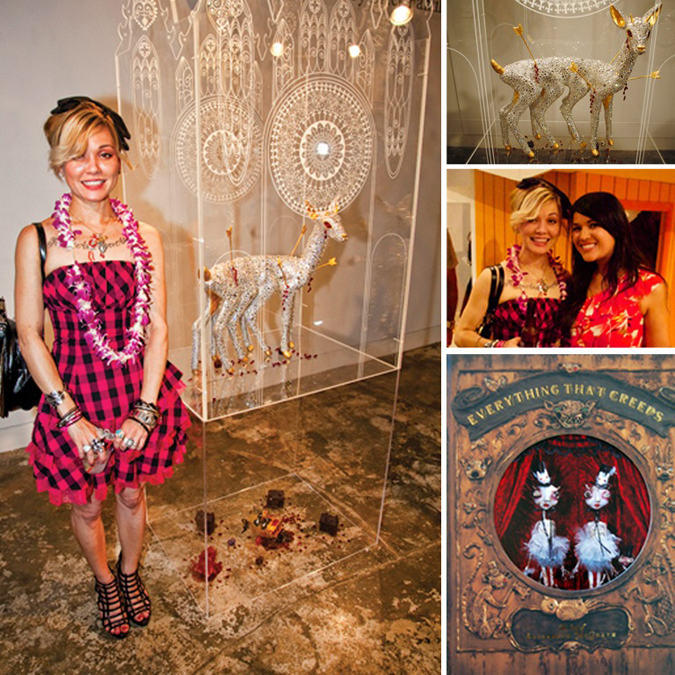 I feel like I haven’t been able to approach art…because I can’t quite get a stable babysitting situation, so right now, I think, it remains to be seen how it’s going to influence it. I think its made me angrier, to be honest with you. Like, I don’t know what it is, but all of a sudden I want to do these evil pieces…just because everything is so sugar-coated in their world, you know? The whole preschool process, all these mom-groups, and I’m not really part of any.

It feels like trying to fit in…after living in my own corner of downtown and being able to avoid mainstream, and now kind of having to submerge and be in the mainstream. So it has kind of fueled this anger in me that’s made me want to explore the darker arts. I don’t know, maybe I’ll have to do it under a different name. I have to come up with some fake name, or something, like Sheila, so I don’t alienate the mom-groups. 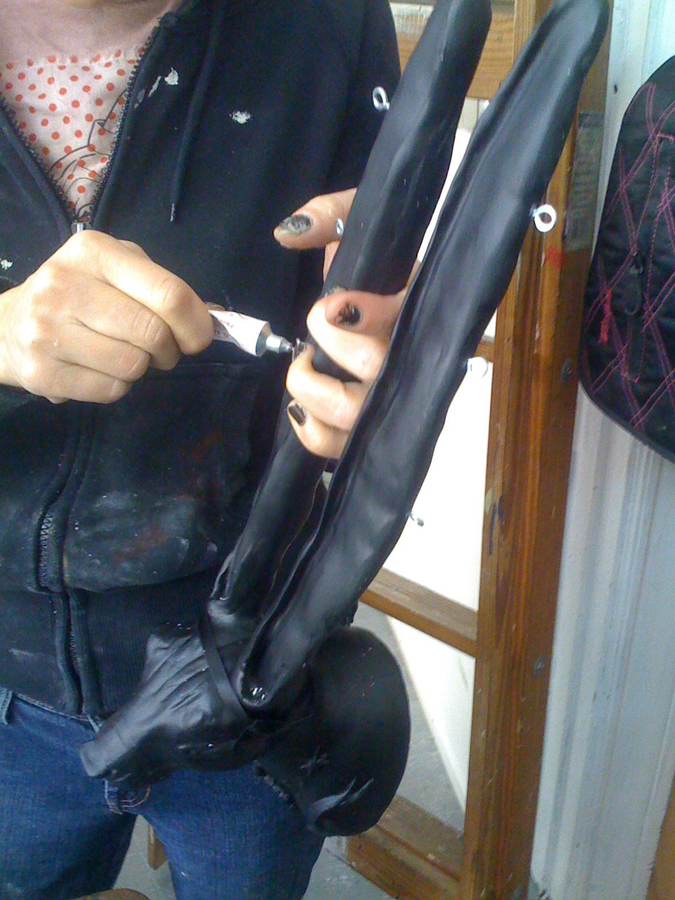 Do you have any reoccurring dreams/nightmares that make their way into your work?

No, I never dream. I think that by the time I fall asleep I’m so tired. I’ve only had one dream that has ever lasted with me. It was this really weird dream that…I was in this transcendental state…and I totally dreamt that I was flying. I was sitting on top of European rooftops and I just took off and started flying and I still remember that dream. And I’m always like, ‘How do I get back to that dream?’ And so you’re trying to listen to all these books on transcendental meditation…and it’s just all infomercials.

It was like six or seven years ago, but it was so intense that I’ve never forgotten it. And even for a couple days after that, I could get to this state where I was back on the roof…but I could never get back in the air. It just never happened. I don’t know what I was doing in my life at that point. I wish I knew.

One of my truly favorite ones was The Shining…even though I know Stephen King hated it. That’s one of the best movies ever.

What creeps you out?

You know, not really much these days. I’m not creeped out by anything, I guess. You know what creeps me out sometimes, is when I’m putting my daughter to bed and when I’m like lying in bed and it’s dark and I have this fear that someone’s going to enter our place. I mean, we haven’t locked our door for fifteen years. So, I feel like I’m going to be really creeped out moving back to suburbia. You don’t realize how safe you are (living in a building in downtown LA)…you’ve got tons of people right down the hall that you know…no one is going to mess with you. 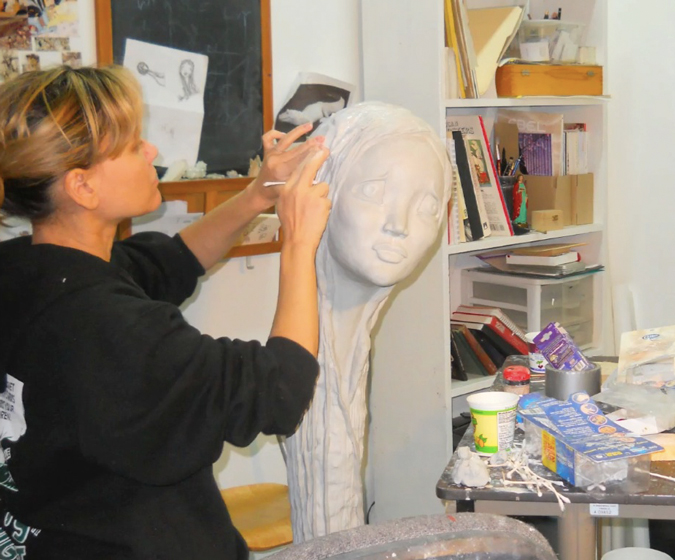 I don’t really take risks unless I’m intoxicated, and then I don’t remember them. 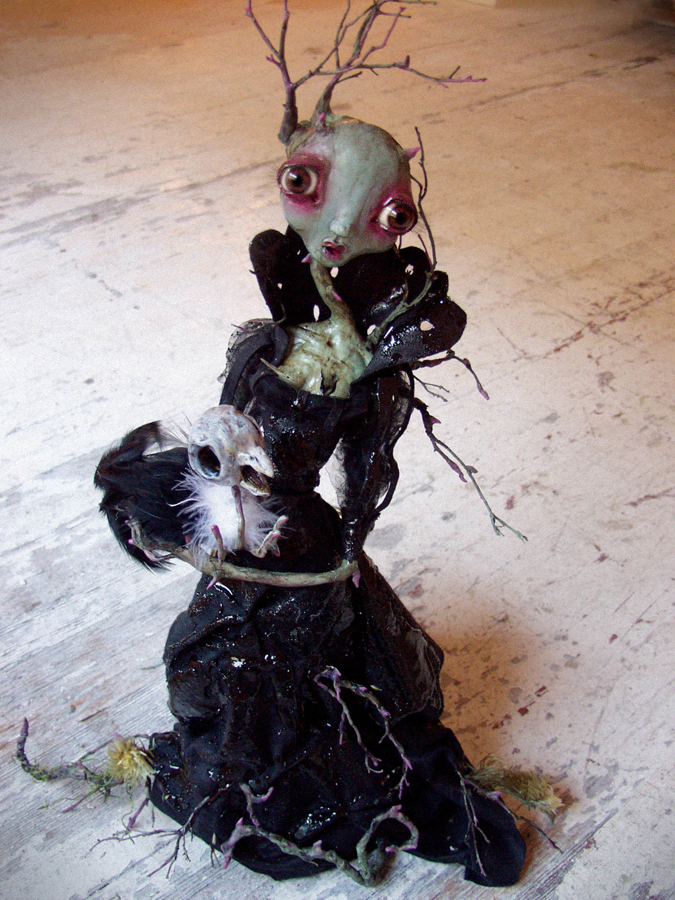 My Facebook really isn’t me. I try to be pretty honest on there, because I’ll be like, ‘Thanks, Miguel (one of her best friends), for helping me today! Thanks for helping answer things…’ But then I realize his tactics totally work, I’ll get like 400 likes.

How did you get the nickname “Bloodbath” McGrath? Who gave that to you?

That was my best friend when I was in the punk band. We kind of had this long-standing thing where, like, if I had a zit or something, she’s like, ‘Oh, no need to worry, let’s put blood on it.’ And as a resu–cuz she made this blood out of corn syrup–so as a result I was always having pimples. So I would just go on stage with a lot of fake blood and she would just call me Bloodbath…and the name kinda stuck. 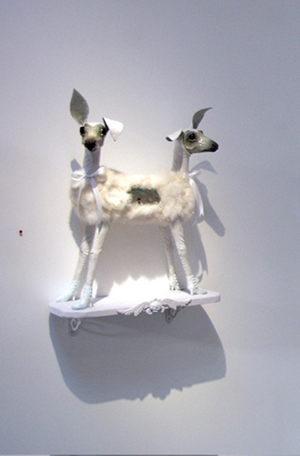 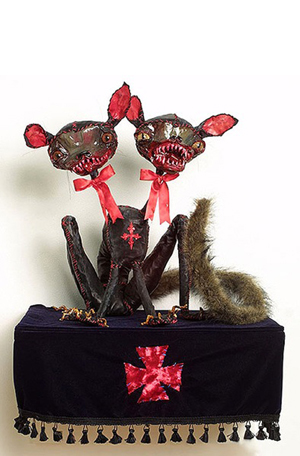 I’ve heard lowbrow and pop surrealism used to describe your art? Is that accurate?

Um. Yeah, I guess I’d throw in a little Outsider Art in there. If I was being brutally honest I’d say it’s kind of Illustrative which is not really a term a lot of artists like to use. Cuz a lot of artists are like ‘I’m a serious artist.’ Really? Cuz it looks like an illustration.  When I was first doing the lowbrow art it definitely helped being in LA because I was in a punk rock band and I was doing punk rock flyers or whatever. And so my friend asked us to play the Key Club…and he was like, ‘Do you want to put up some of your artwork? You wanna put it in the show?’ And I was like ‘Yeah.’ So I did this piece…it was The Junior Meth Lab. And then we had The People Farm. It was like this giant ant putting people into this ant farm. So they ended up selling.

So I got caught up in the whole lowbrow thing. It was mainly male-driven, but I got in there. Nobody was doing sculpture-stuff. It was this underground culture that was very LA. I started to do some group shows and painting and stuff and I was trying to mimic the Hot Rod stuff…and nobody liked those. And then I started doing more of the 3D stuff and it really kind of took off. And then all these lowbrow art galleries started opening up all across America…and then all across the world. 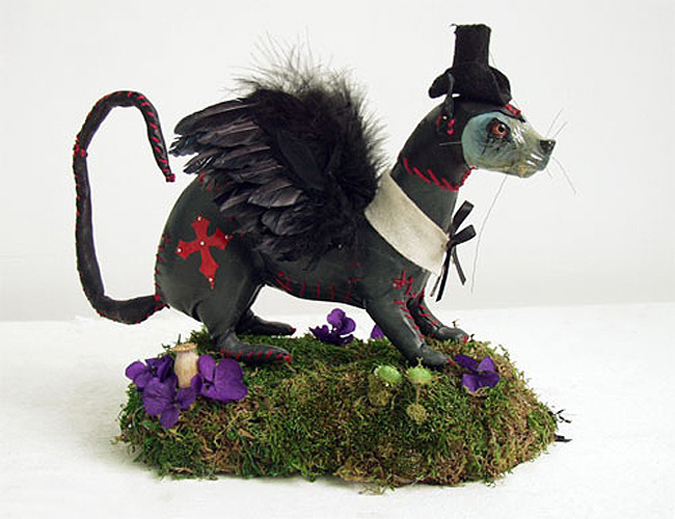 What inspires or influences your art?

I think maybe being going to church and being raised Catholic. I was around a lot of iconography and shrines and stuff like that. So I think that was partially part of it and then my mom’s from Singapore and so I remember going down there and they had this one thing called the Tiger Balm Gardens and there were all these crazy giant rats and rabbits fighting. And there was this one thing called The Gates of Hell and…this was so many years ago, I could be wrong…but in my memory there were all these little fish tank-like opening that you could look into with these scenarios…like one is this demon-thing eating people and then pooping them out…and then there’s like another thing where these people are trying to escape and all their legs are being cut off. So basically you go through these thirteen gates of hell and by the end of it you reincarnate…into…I don’t know…your new form. So I was really interested in all those dioramas.

And my aunt had these two bar/restaurant things, so she would drag me everywhere. She was building one of them from the ground up…so she wanted this Irish-style pub…and she was super-eccentric and had all this taxidermy and I had to decorate all the taxidermy heads. And she had all this stuff on one side of the restaurant…and I had to build the leprechaun’s graveyard. And she had me do all these Easter displays…and I was like nine…and we’d be working really late at night. So I’ve been around art, in weird ways, all my life. 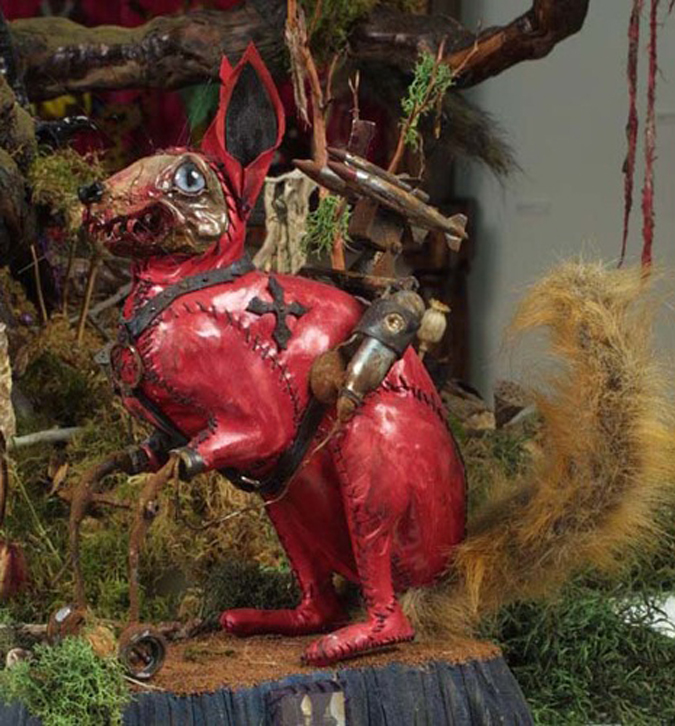 How does LA influence you and your work? Does it?

Well, I would have never been able to support myself as an artist (back in the day) if it wasn’t for the cheap rent. I mean, right now it’s getting really expensive, but I feel like LA was the last city you could live in creatively. 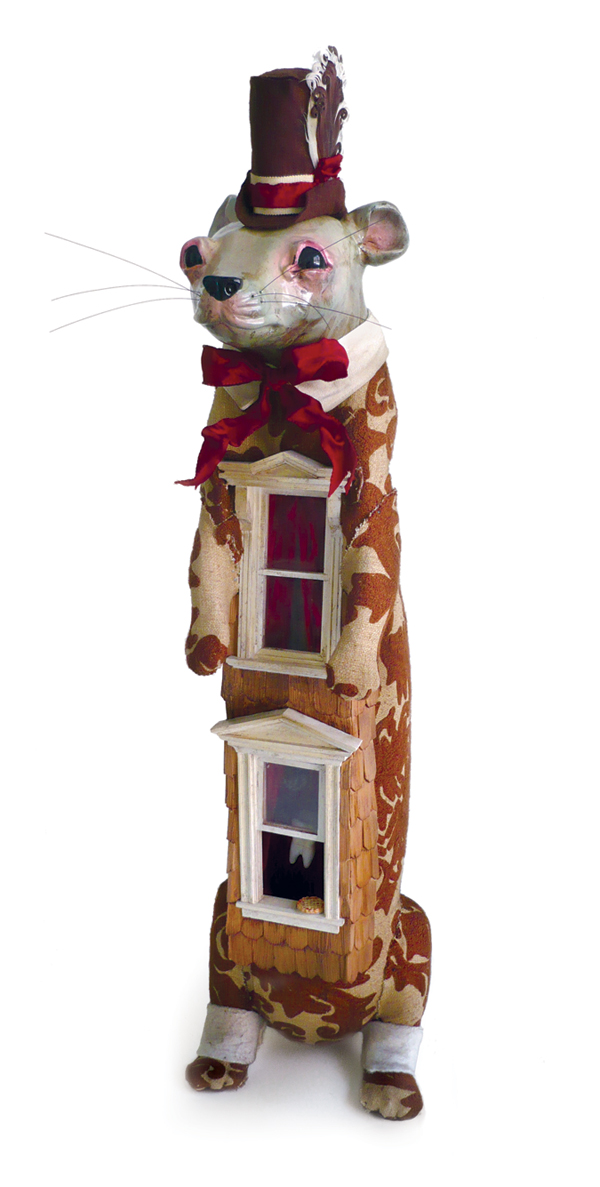 What’s up with your band Miss Derringer? Are you still playing shows?

What are you listening to right now? Do you use music when you create?

You know, I used to. It was weird, the first book I did all those pieces I was into music. It’s weird, I’m not the type of person that is into Dead Can Dance, but for some reason I was listening to this CD my friend sent me, and I was in this space that was like…the guy traded me art to let me have this space for a year…it was (next to) this crazy “dime-a-dance” place and I had this little tiny studio with blinking, dancing lights sign right outside my door in downtown LA…downstairs who knows what’s going on. It was this weird Tijuana-looking club. The owner was like a hundred and kept getting arrested. But I’m listening to this creepy Dead Can Dance CD and I think I made the scariest artwork ever.

I definitely listen to music when I’m coming up with ideas, but I feel like the latter work I’ve been doing…I’ve just been…I just listen to a lot of audio books.

So the first stuff was just all music and then I was in this horrible punk rock band…I don’t know…since I was a teenager, so we were going to bars like every night to play a show and having to watch like fifty bands, you know what I mean? So by the end of like twenty years of that, I was like, I can’t listen to any more music. I just couldn’t sit down and listen to music anymore. I think now I could. And then all the punk bands I was in…I realized that, Oh God, I never really liked this music…I liked performing it. And then I end up with Dead Can Dance and lame stuff that makes me make weird hippy art. So I’m like, I’m just going to cut the music and listen to audio books. So that’s been my main staple…and I have like 3,000 titles in my library. 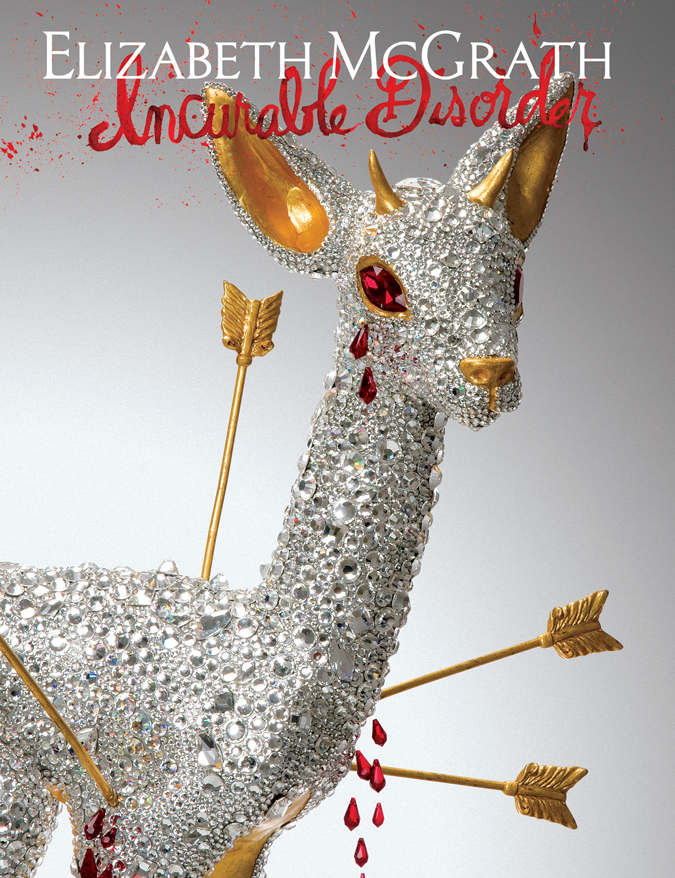 What’s your favorite APP on your phone?

So your latest work, Incurable Disorder, was inspired by a lot of audiobooks?

Yeah, definitely. And also if I have a really good audiobook I know I’ll get up that morning and I’ll want to do my work. And if I have a crappy audiobooks…until I have a good book…that work will linger. Yeah, audiobooks are my fuel.