Expectations are high for Marvel’s latest sequel, and they should be, considering what “Iron Man 3” pulled off at the beginning of the summer, debuting with the second-highest total of all time–$174M– and nearly doubling the global tally of its predecessors with $1.2 billion.  That’s just plain unheard of for a threequel, or any other franchise outside  “Fast & Furious.”

Gives you an idea just how much juice the Marvel brand squeezes these days, and how “The Avengers” really was a multiplex masterstroke that will continue to expand the comic book universe for the foreseeable future.  We’ve seen what assembling earth’s mightiest heroes did for Tony Stark, and now, we’re about to see what it does for Thor.

The original cost $150M and opened 2011’s summer-movie floodgates with a thunderous bow of $65M on its way to nearly $450M worldwide. Like most Marvel movies lately, “The Dark World” rolled out overseas first, and scored $109M in its first few days.  Advance tracking calls for a debut of $85+M domestically, however, as we saw with “Iron Man 3,” the “Avengers” box office boost could be even more substantial.

Although “Thor: The Dark World” carries a reported budget of around $200M, that number will easily be matched in its first ten days of release, and looks like it could swell to $650+M globally by the end of its world tour.

Universal also trotted out their romantic time-travel film, “About Time,” in advance of the domestic release, and it has already clocked up $43M abroad.  Still, that’s a long way from director Richard Curtis’ directorial debut, “Love Actually,” which came bearing gifts that totaled $187M internationally, and $246M worldwide.

The producers of “About Time” are trying very hard to convince audiences that “About Time” is just like “Love Actually,” especially since it’s from the same director and is heavily promoting that fact as one of the main selling points.

While star Rachel McAdams is no stranger to the rom-com genre, the other lead, Domhnall Gleeson, is basically an unknown here, despite his role as Bill Weasley in the “Harry Potter and the Deathly Hallows” films. It’s doubtful that “About Time” will have the same success as “Love Actually,” but it should hold up well through the holidays as there aren’t many heart-fluttering flicks out there that appeal to older audiences.

Also expanding this weekend are both “12 Years A Slave” and “All is Lost.” Fox Searchlight’s slave drama has already hauled in $8.9M and heading into over 1,100+ venues, expect $6M-$7M. Meanwhile, Roadside Attractions’ stormy drama goes into moderate wide release in 400+ theaters.

For the first time ever, Star Wars will forego an early summer release and instead debut over the holiday season, as “Star Wars: Episode VII” will officially hit screens Dec. 18, 2015. It was previously rumored that Disney’s long-awaited sequel would snag a summer release, but with an insanely crowded marketplace, this makes sense, as it will now be the capper to what is the most anticipated movie year in the history of popcorn pictures.

As of right now, two other films, “Warcraft” (the World of Warcraft video game adaption) and “Inferno,” (“The Da Vinci Code” threequel) are also set to open the same day as the continuing space-age saga, but likely one or both will move, as they don’t really stand a chance against a film that will probably open with $200+ million. Disney also confirmed “Episode VII” will be released in 3D…so just imagine how Abrams’ lens flares will look! Ooh la la!

ANOTHER WOLVERINE FOR HUGH JACKMAN?

It was recently announced that Gavin Hood, who most recently helmed “The Wolverine,” is in discussions with Fox for another sequel to Marvel’s X-Men spin-off, which would have Hugh Jackman strapping on the claws for an eye-popping 8th time (including a cameo in “X-Men: First Class,” and this coming summer’s “X-Men: Days of Future Past”) And with no end in sight for the “X-Men” series, the superhero record will either be his or Robert Downey Jr.’s, provided he continues to sign up for “Avengers” sequels.

In the pantheon of lead character portrayals in English-language films, that will place him ahead of Sean Connery and Roger Moore, who each had seven outings as James Bond.  Jackman would be tied with Leonard Nemoy who spiked up his ears as Spock eight times, including the new “Star Trek” reboot and its sequel.  FYI: William Shatner only has seven turns as James T. Kirk, and we all know, he’s none too happy about that.  Still, a regular gig as the priceline.com pitchman at 82 years old is nothing to shake a cane at.

If you want to get right down to it though, it’s Robert Englund’s record to lose however, as he’s legitimately portrayed everyone’s favorite sweater-toting baddie, Freddy, in a starring capacity eight occasions over the course of the “Nightmare on Elm Street” series.

It was announced this week that Marvel and Netflix have partnered up for some superhero shenanigans as the two companies inked a deal for “Daredevil,” “Iron Fist,” “Luke Cage” and “Jessica Jones” to all appear in their own live-action series set to stream in 2015.

Sure, these aren’t exactly A-list Avengers we’re talking about here, but just like DC Comics’ “Arrow,” and Marvel’s own “Agents of S.H.I.E.L.D.” on ABC,  both parties are betting that having a platform for steady original content will change that.

What we’re witnessing here is the future of TV and media in a sense, which is becoming more subscriber-oriented than ad-based,  developing content for what is essentially month-to-month pay-per-view by specific vendors.

Netflix has already had great success with the continuation of the “Arrested Development” series and their original programming, “Orange is the New Black.”  Now they’re plugging into the Marvel Universe, which is very quickly becoming an all-encompassing media presence thanks to the marketing machine that is Disney.  Good luck escaping their almighty grip.

Although Dish Network owns the Blockbuster brand, thus assuring its existence in some form, the final 300 Blockbuster stores in the US are shuddering their doors as 2013 winds down, and the once undisputed king of movie rentals  has officially been dethroned.

They’re also discontinuing their disc-by-mail service at the end of January, effectively signaling that digital has won the war. Netflix, Amazon, iTunes and other streaming retailers knocked Blockbuster to its knees over the last few years and this announcement is officially the death knell.

RIP Blockbuster. RIP video stores. While Redbox and various other kiosks remain the lone tactile outposts, the independent video stores that remain will slowly but surely be choked out, as it’s just a matter of time now before they too feel the full force of the dark side of digital. This is truly the end of an era for those of us who spent countless hours wandering video store aisles surrounded by video-box art. On the plus side though, think of all the scratched-to-all-hell DVDs and Blu-Rays that will be on clearance now.

It shouldn’t really come to a surprise to anyone in an age where every film is at our fingertips, and every link is a link to another something you like that inevitably links to a similar like via link (see links below). Thus, arriving at a cult series of films is a lot easier these days; you simply plop down in your chair and scour the internets. Back in the day, you actually had to do legwork, searching high and low amongst dilapidated video shelves for those cult classics.

Seriously, discovering these titles might have taken years of ferreting out people’s film stashes and befriending countless video store burnouts. Now it takes less than a minute. Science!

CHOICE CUT OF THE WEEK: “X-MEN: DAYS OF FUTURE PAST”

There were reports online of people welling up with emotion, even stricken with tears, while watching the latest X-Men trailer.  And by people, of course, I mean fanboys. Fanboys that have never known the gentle touch of a woman…other than their sweet mums safely tucking them in at night.

C’mon, am I the only one who thinks this looks like “X-Men: Days of Our Lives Of Future Past?” Get your emotions in check X-Men, you’re superheroes for Pete’s sake! Crying. Regret. Rage. Suffering. Ooh, boy,  do I need to pop a couple Xanax before I go to this?

There are some franchise films that just seem laughable to try and cross-promote…almost as if they’re too regal for product tie-ins.  Which is why when I saw Denny’s latest flier in my mailbox yesterday touting, ‘Eat Like A Hobbit,” I was a little taken aback.  Yes, “The Hobbit: The Desolation of Smaug”  just got slammed. Breakfast slammed. 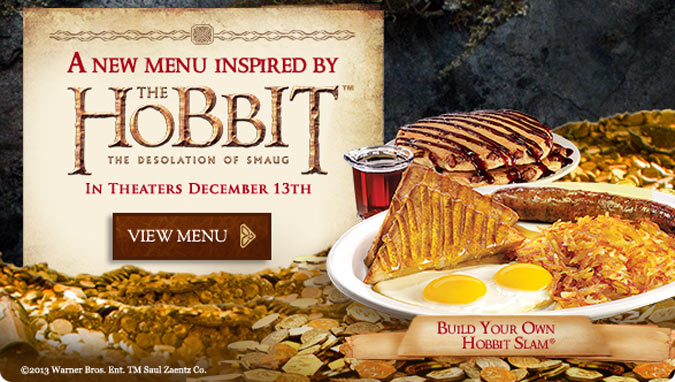 You have to admit there is something holier-than-thou about the “Lord of the Rings” series and “The Hobbit,” which are no doubt popcorn flicks, but also cater to the highest degree of blockbuster pedigree. In other words: they don’t spoon-feed you. Until now. 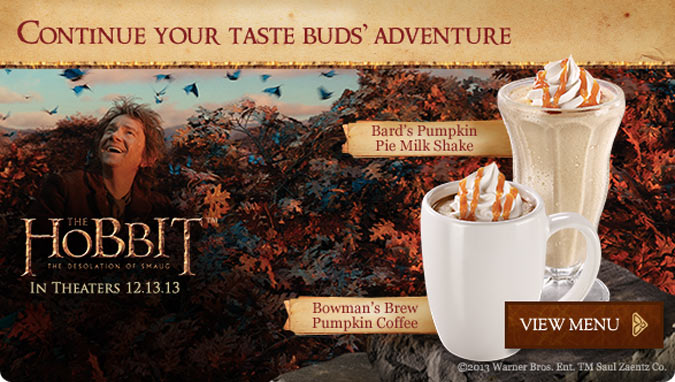 In fact, you can shovel away trademarked meals like Bilbo’s Breakfast Feast, Hobbit Hole Breakfast, Smaug’s Fire Burger, and slurp it all down with Bard’s Pumpkin Pie Milk Shake. If only they had Moons Over My Hobbits! Certainly, that would be a precious favorite of Gollum.

Yes, the Hobbit-inspired menu is available now through December 13th when the Hobbit sequel opens. And while I jest about this travesty of gorging proportions , I’m pretty sure I’m going to utilize that buy-one-entree-get-one-for-99-cents coupon, as I’ve already been bombarded by multiple people saying they’re going to Denny’s for the first time in years because of this promotion.

In this day-and-age, no tentpole film on earth, or Middle-earth as it were, is safe from being branded, tainted, disseminated, milked and McMealed to justify exorbitant budgetary costs.  So, we might as well accept it, dig in and just enjoy the craziness.  You know, I’m pretty sure if there was one restaurant in The Shire, it would be a Denny’s.  I just wonder how they would address the ‘No Shoes, No Service’ policy.