With Christmas just around the corner, Hollywood is busy stuffing theaters with cinematic goodies, as four flicks hope to deliver the goods in wide release this weekend. While “Saving Mr. Banks” and “American Hustle” expand after successful limited offerings, “Walking with Dinosaurs 3D” and “Anchorman 2” make their dashing debuts.

Absence, not abstinence Ron Burgundy would remind you, makes the heart grow fonder, and that’s especially true for Paramount’s “Anchorman 2,” which opened Wednesday to $8.1 million, and may have enough misogynistic momentum to nab the top spot.

Last week’s champ, “The Hobbit: The Desolation of Smaug,” will certainly be a contender in the box office battle royale, but Will Ferrell and his merry band of pranksters have aggressively and unabashedly overloaded pop culture’s main circuits and are poised to pop off.  I mean, who hasn’t bought a Dodge Durango over the last few weeks?

Paramount’s original inappropriately awesome comedy debuted in the summer 2004 with $28M on its way to $84M domestic. And while the sequel cost $50M—twice as much as the original—it should see its 5-day rollout nearly equal to its budget.

Comedy sequels clocking in nearly a decade after the original are rare indeed, and usually turn out more like “Caddyshack 2” than anything else. Not this time. With all the major OG players returning—director Adam McKay, Will Ferrell, Steve Carell, Paul Rudd—expect solid results, and possibly bridging the international gap too, as “Anchorman” hardly engaged overseas viewers at all, netting just $5 million.

Believe it or not, this is Ferrell’s first sequel in a starring capacity. I suppose it only seems like his flicks are redundant iterations of one another.  Boggles the mind that one, but there comes a point in everyone’s career where paychecks are only written in Roman numerals…and this may be that time.  Heck, even Adam Sandler resisted sequelitis until this past summer’s “Grown Ups 2.”

Wouldn’t mind seeing “Elf 2” from Ferrell sooner than later if he’s opened the sequel floodgates. Plus, if “Anchorman 2” leaves Paramount’s stocking overflowing this Christmas, and “Walter Mitty” catches on, maybe Ben Stiller’s much-rumored “Zoolander 2” will finally get the greenlight.

And while dinosaurs haven’t been around since the Mesozoic Era, Fox’s kiddie-pic, “Walking with Dinosaurs 3D,” isn’t likely to bring back much fond remembrance for the mighty lizards.  Based on BBC’s mini-series, the film is being advertised as a family adventure, however it’s about as far away from “Jurassic Park” as you can get. Yep, talking dinosaurs, folks…something we’ve already seen in Disney’s “Dinosaur” and “The Land Before Time” series.

Even though “Walking with Dinosaurs” is opening in a very wide 3,200+ theaters, Fox is pushing the 3D aspect awfully hard, with over 80% of the theaters screening exclusively in the pricey third dimension. That doesn’t bode well for parents taking their kids, as we’re talking about over $50 bucks a pop for a foursome. Can’t imagine this will dig up more than $12M.

“American Hustle” will definitely get its groove on, expanding into over 2,500+ theaters, which should place David O. Russell’s drama squarely in third place for the weekend. Its per-theater-average last weekend was the best debut of the year for a live-action film, scoring $123,409 per in 6 venues.  Look for Sony’s award contender to cash in on $18M on its way to a very long box office run.

Unfortunately, the same can’t be said of Disney’s “Saving Mr. Banks,” which debuted in 9 more theaters than “American Hustle” last weekend, but rang up $300k less. While the film is quite good, one that “Mary Poppins” fans will certainly flock to, its audience is limited, consisting mostly of older adults, and not really a family film at all.  Should do well over the holidays, but not supercalifragilisticexpialidocious well.  Expect $12M at 2,100+ sites.

“DIVERGENT” GETS SEQUEL AND THREEQUEL AND IS STILL MONTHS AWAY

It takes a certain amount of cinematic swagger-tude for a studio to announce a sequel before the original has unspooled. In fact, outside of the further adventures in spandex (aka superheroes), it’s almost unheard of, and even then, most companies wait until the Monday following a huge opening weekend to drop a splashy press release.

As the one lone entity outside the Big Six Studios that truly competes with them, Lionsgate doesn’t always play by the rules. Obviously. They are so keen on their new YA adaptation, “Divergent,” that they have not only set the sequel, “Insergent,” for March 20, 2015, but the threequel, “Allegiant,” for March 18, 2016.

Keep in mind that the franchise’s first film is still months away, and that the YA adaptation landscape is a wasteland of missed opportunities, tanked tentpoles and crushed egos. Still, you have to give credit for Lionsgate’s bullish behavior, no doubt spurred on by the massive success of “The Hunger Games” and “Twilight” series.

So, is Veronica Roth’s dystopian trilogy next in line for the throne that “Harry Potter,” and “Twilight” once commandeered, and “The Hunger Games” now sits on? If book sales are any indication—and they certainly were with Katniss and Peeta—“Divergent” might be as close to a sure thing as you can get. This fall, first-day sales for the final installment, “Allegiant,” broke records and that’s exactly the sort of bookish momentum that “The Hunger Games” capitalized on.

My one reservation would be this: It may not be different enough to capture a wide swath of audience outside the core demographics of young women. However, like “Twilight” ultimately proved, that may not be necessary.

“Harry Potter” was a world created by sheer magic, “Twilight” sucked females in with vampires and werewolves and the promise of true love, while “The Hunger Games” thrived in a post-apocalyptic wasteland with a totalitarian government. The one thing that each of these franchises achieved was creating a whole new world unto itself; similar enough in story machinations, but different enough for audiences to latch on to and want to visit…over and over again.

The first trailer for “Divergent” doesn’t really go to any great lengths to differentiate itself from “The Hunger Games,” besides the fact that the young heroes are all tatted up.  Still, with Neil Burger (“The Illusionsist,” “Limitless”) at the helm, and Lionsgate pulling the strings, betting against it might just be an exercise in futility.

Here’s the exclusive first clip of  “Divergent,” or is this an ad for Hot Topic. You decide. Hmmm, I think I know what audience they’re going for now… Spoiler Alert: shirt comes off, tats are revealed, making out ensues. Is it getting hot in here, or is that just my thermal underwear doing its thing?

Growing up on a steady diet of “The Flintstones” and “Gilligan’s Island” reruns (Yes folks, that’s pre-cable we’re talking about) my brother and I probably saw every episode at least a half-dozen times, since they played back to back every Monday through Friday from 1st grade until around 7th grade when the NES and girls took over as our main distractions.

Josh Gad  (“Frozen,” “Jobs”) is currently co-writing the script for Warner Bros., with an eye on starring, as well. He’d probably step into the role of Skipper with his build, but you never know. Casting the first mate, Gilligan, is the key here; I’m thinking probably Jim Parsons from “The Big Bang Theory” would be a solid choice, since David Schwimmer is a bit past his Gilligan-prime now.

While the Flintstone flicks did relatively well for Universal, I suppose it was just a matter of time before someone took a crack at the castaways, since every TV show ever will one day grace the silver screen. How else can you explain “Betwitched,” “My Favorite Martian,”  “Leave it to Beaver,” “The Beverly Hillbillies,” “McHale’s Navy” and “The Brady Bunch Movie.” Ok, that last one is pretty good, I’ll admit.

It will have taken them over 50 years since the debut of “Gilligan’s Island” in 1964, so let’s not rush this thing…and please, don’t mess with the theme song. It’s pitch perfect. God knows we don’t need someone like Mumford & Sons tampering with the sweet sonic strumming of that tropical ditty.

Here’s hoping Gad and Co. are writing in some song and dance numbers though, like Ginger and Mary Ann’s (sorry, Mrs. Howell) “The Honey Bees.” Pretty sure this was my brother and I’s very first introduction into sex ed. Serious buzz, folks. Oh, and, full disclosure, I do own all three seasons on DVD.

No matter what you do, Disney, no one will ever mistake “Need for Speed” for “Fast & Furious.” Good try, though. File under: Also-ran, Video Game Burnout, No Need for This Much Speed. 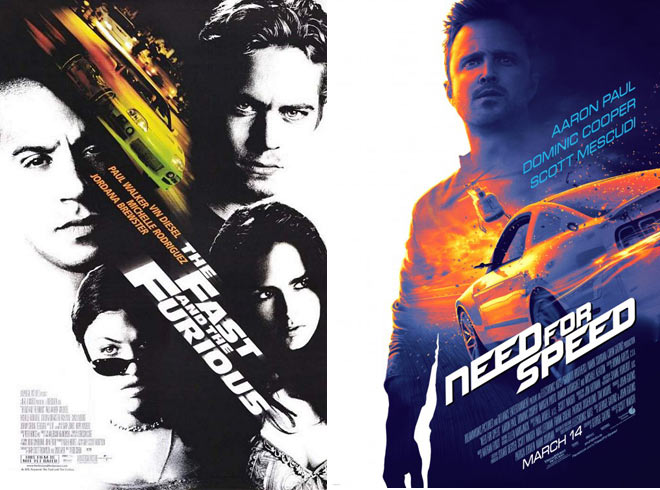 CAN’T GET ENOUGH LARS VON TRIER? YOU’RE IN LUCK. YOU GET TWO.

It’s not a stretch to say Danish director Lars Von Trier is an acquired taste.  I mean, even his name sounds trite and overtly contrived, especially to American ears. In fact, I dare say, if you were to make up a fake name for an ostensibly artsy and audaciously fartsy foreign director, this would fit the bill perfectly. His films have routinely polarized critics and infuriated audiences, which is probably why he isn’t in line to direct one of the “Divergent” sequels anytime soon.

Hipsters and cinephiles may love the man, but the multiplex masses routinely ignore him. In fact, his films rarely venture outside arthouses.  Still, that hasn’t stopped Magnolia from releasing his latest work “Nymphomaniac” in two parts, set for March 21 and April 18 of next year.

Is this another example of a distributor having complete faith in their product? Hardly. This is about sex selling. As we all know, “Fifty Shades of Grey” is still over a year away, and for audiences looking to bust a nut, or a gasket…this may be just what the perverted doctor ordered. Or not. Probably not.  Still, the cast is pretty impressive and should have Mr. Skin (www.mrskin.com) busy for months.

Would it be all right if I show the children the whoring trailer? Proceed with caution. You’ve been warned.

CHOICE CUT OF THE WEEK: Paramount’s “Welcome to Yesterday”

You say “Chronicle” and “Primer” are your favorite films ever? Perfect. Paramount combines elements of both as it drops the found-footage, teen time-travel drama in hopes of plugging into the same youth audiences that made “Project X” and Fox’s lo-fi superhero flick, “Chronicle,” low budget, high concept hits. Street Date: February 28, 2014.

Christopher Nolan is putting the full-tilt tease back in teaser trailer, as the super secretive director gives us nothing…and everything…in our first look at his latest, “Interstellar,” which is set to break through dimensional barriers and into theaters November 7, 2014.  Yes, there is no bigger tease than a trailer that’s comprised entirely of archival footage. No doubt, upon adding real footage, it will be brilliant…yet very, very distant.