The roar of the summer box office isn’t fading out anytime soon, as we’re looking at the first time since 2009 that Hollywood has had a new #1 film three weeks in a row to start the summer season.

That’s a real rarity in the age of the superhero flick, which traditionally dominate multiplexes for two or three weeks before meeting their maker.  Last weekend, “Neighbors” proved  Spidey simply couldn’t hang with Seth & Zac, debuting with nearly $50M, and that “Amazing Spider-Man 2” isn’t nearly as amazing or spectacular as advertised.

“Gozilla” absolutely looks as good as advertised, as one of the oldest box office beasts of all-time returns to stomp cinemas and should dominate with up to $70M+ this weekend domestically in nearly 4,000 theaters. Warner’s creature feature is also set to breakout overseas, launching nearly everywhere except China and Japan. Oh, the irony.

Go big, or go extinct. That was Warner’s rally cry last summer, but it certainly didn’t help as they saw their $200M production, “Pacific Rim,” teeter and nearly tank in the U.S., barely busting through the $100M barrier. The $300M it grossed internationally helped them save face, but it didn’t jumpstart a new franchise like they had hoped.

Warner’s spent $160M on “Godzilla,” and purposely went about as far away from the “Pacific Rim” monster mash as you can get, going strictly for the classic look and feel of a real monster invasion ala “Cloverfield.”

Believe it or not, it’s been 16 years since we’ve seen the angry giant green on the big screen as Sony’s monstrosity, starring Matthew Broderick and Jean Reno and directed by Roland Emmerich, despite being big, bloated and boring, still scored $136M domestic and $379M worldwide.  Rotten Tomatoes certified that version “rotten” with 25%, while 2014’s reboot is currently hovering around 78% “fresh.”  Expect much, much bigger numbers on both fronts this go-round.

Thing is, “Godzilla” as a brand has been around forever. Proof: “Godzilla vs. Mothra” was the first date my parents ever went on…so for them, and many older couples, it will be like a little piece of nostalgia…although it’s doubtful they’ll find a drive-in to double-date this time.  Like “World War Z” last summer, this action thriller appeals to many different demographics and will easily open #1 and should have a long run, too.

Ah, the beloved sports movie. Disney has made more than their fair share of these, although nothing truly compares to Don Knotts in “Gus,” the story of an ass-kicking mule that boots field goals 100 yards. What? You haven’t seen that 1976 gem? Search it out.

Continuing in the long tradition, Disney drops “Million Dollar Arm” this weekend, and although it follows the traditional arc it really feels like they are stretching their own cookie-cutter formula here, as not only is the true version of this story sort of a bust, so is the casting of Jon Hamm of “Madmen” fame.

It’s not that Hamm isn’t a major presence, it’s just that co-star Lake Bell takes the ball from his glove in every scene and is so charming and believable, that you wish they’d changed places, and she was the starting pitcher. As much as Hamm tries to transform into a “man with morals,” he never really makes solid contact with the audience.

In 3000+ theaters, expect around $15M and a decent run thanks to the mousey marketing prowess of the Magic Kingdom.

Expanding on the sweet smell of success, Open Road Films dishes out Jon Favreau’s “Chef” in 72 sites this weekend after a sweet launch last week that saw it gross $204,961 in 6 venues–$34,160 per.

This is his most personal piece of filmmaking since “Swingers,” although Doug Liman directed that, it was Favreau’s  script, and quintessentially his film.  From swinger to foodie…we write what we know. And after his TV series “Dinner for Five” we all know this guy really understands and enjoys his eats.

THE MAGIC OF HARRY POTTER RETURNS TO MULTIPLEXES

The expanded universe of Harry Potter, that is. Warner’s announced that “Fantastic Beasts and Where to Find Them”–J.K. Rowling’s 2001 book written under the pseudonym Newt Scamander–will drop into theaters Nov. 16, 2016.

With $7.7 billion in worldwide grosses locked away at Gringotts is it any wonder that Warner Bros. would find a way to make a Harry Potter spin-off magically appear? Although no major cast members nor a director have been set in stone, the story reportedly takes place in New York some seven decades before Harry’s adventures at Hogwarts.

The good news is, Rowling is writing the screenplay and just knowing that her magic quill is guiding the offshoot is a reason to wave your wands…as it could open a gateway to an entire new trilogy and beyond.

Warner Bros. released a b/w still of Ben Affleck’s Batman from Zack Snyder’s new Man of Steel sequel (who are they kidding–we all know it’s a “Justice League” movie) with him standing in front of the brand-spanking new Batmobile…and fanboys nearly broke the internets. 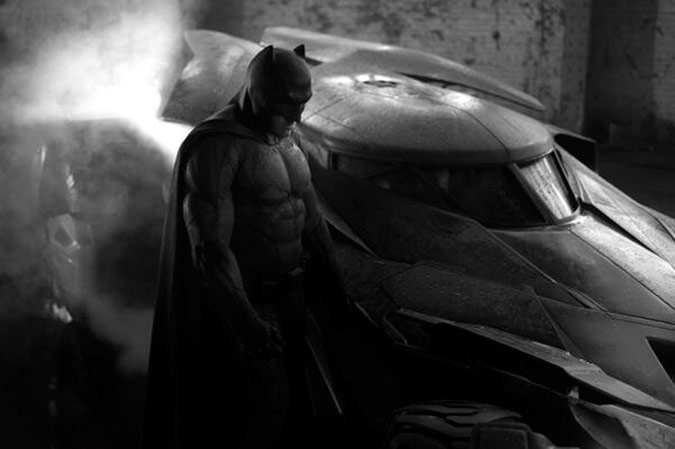 Like most batsuits, The Dark Knight is probably ripped beyond believe, but thankfully no rubber nipples are in sight this time. The most perplexing thing of all though, is that it’s really too dark to see if the codpiece is worthy of George Clooney’s, but I suspect Affleck’s agent and manager made sure that was all worked out in the contract.

What is it about Batman that makes people want to dance around…in tights?

Power Rangers have always been an interesting anomaly. Consider that this is a TV series that has somehow been on for over two decades and has always dominated toy aisles at Toys R’ Us, so you can see why Lionsgate is hot to make a return to the features world. But should they be?

Probably not. I mean, unless they do something radical like buy up all the b-roll from “Pacific Rim” or something, there really isn’t a huge market for a big budget reboot. You can blame the success of “The Lego Movie” since it’s now a viable property, so much so that every toy manufacturer thinks they’re next in line for the next big thing. It’s a movie merchandiser’s dream world…and like it or not…that’s where we’re headed for the foreseeable future.

Now if Hello Kitty ever got her act together, I’m pretty sure that would be the cat’s meow. Barbie certainly has tentpole potential too, and “TMNT” already has the box office biz to back up its worthiness.

Consider that the first two films, “Mighty Morphin Power Rangers: The Movie” and “Turbo: A Power Rangers Movie” combined to gross just $75M worldwide shows there is a limited market for this material– i.e. boys aged 6-10 and inebriated college kids. That’s a pretty small market, so unless they completely reinvent the Power Ranger format, they better not be spending over $20M.

Truth is, would anybody even know if they pulled a “Son of God” and just reassembled some footage from the vaults?

No, an alien creature didn’t explode from Giger’s chest, nor was his passing due to injuries sustained from being burned alive by acidic blood. No, this was merely a 74-year-old man taking a tumble and being unable to get back on his feet.

I don’t think anyone will ever forget the iconic alien bursting onto the scene in Ridley Scott’s 1979 sci-fi/horror masterpiece or the Swiss surrealist’s horrific yet compelling designs. Thanks for all the sleepless nights throughout the years Hans Ruedi, you will be missed.

ON LOCK DOWN: HOLLYWOOD NEEDS TO STOP THE NEW NO-NAME GAME

Over the last few years we’ve been witness to a pretty lame trend where studios plant their flag on release dates without actually having the title of a film. That’s all good and fine when we’re talking about “Marvel Untitled,” “Untitled Pixar,” “Untitled Marvel/Fox”–at least you have a kernel of what to expect.

The same can’t really be said about what Universal and Legendary Pictures did this week as they took it a step beyond the bizarre, announcing the following title for November 16, 2016–“Untitled 2016 Event Project.”

Hey, I don’t know what it’s about, but man, I’m really hoping for something epically eventful like “Waterworld 2” or a “Jaws” reboot.

Correct me if I’m wrong, but isn’t the point of blitzing media outlets with an “announcement,” is that you actually announce something worth yapping about?!  I mean when you get right down to it, isn’t that marketing 101? Throw us a bone here–a star, a director, a location…anything.  If I squint my eyes, the press release actually looks like this: “Untitled Dryland Adventure w/ Kevin Costner.” We all have dreams.

Fincher is a master of menacing mood, but misses the mainstream mark terribly with the inclusion of the song “She”…which was already featured in the rom-com, “Notting Hill.”  I get what they’re going for in the first trailer from Gillian Flynn’s best-selling book, but there are thousands upon thousands of great songs out there that don’t already resonate with a specific film.  Find one.  Still, should be a great movie, just not going to win over new fans with a teaser that will leave multiplex masses scratching their heads and checking their phones.

CHOICE CLIP OF EVERY SUMMER: Mungo Jerry “In the Summertime”