We’ve seen a lot of art this year, but only a few artists really stood out to us.

One of those artists was Laura Lancaster, a British painter whose sweeping masterful strokes enchanted us at Art Basel – Hong Kong.

It’s exciting stuff and we hope you start following her work because Lancaster’s canvases are transfixing and deserve special notice.

If you’re traveling around England this month, try to catch Laura’s  solo show “Ellipsis” at WORKPLACE Gallery in Gateshead. It runs until October 31st. 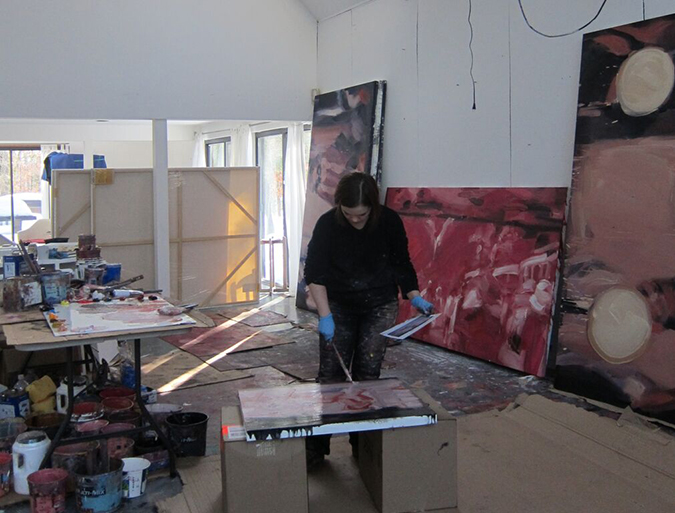 I am an artist living and working in the North East of England. I graduated Northumbria University, in Newcastle Upon Tyne in 2001, and since then have established an international reputation as a painter.

Informally, I have also played guitar/sang in various bands over the years including Big Fail, Silver Fox and Chippewa Falls.

2. How and why did you become a painter?

I have always painted, so it is hard to pin down why I became a painter. The language of painting is the thing that most makes sense to me, and is a big part of how I think. It is something which I am consistently challenged and intrigued by.

After graduation I maintained a focus on painting and made sure I had a studio so that I could continue my practice, putting this first on the priority list. A few years after this, Workplace Gallery was founded and I have been working with them for the last ten years now, which has also helped me to establish myself as a painter, exhibiting my work worldwide and helping me to establish a collector base and connections within the artworld. 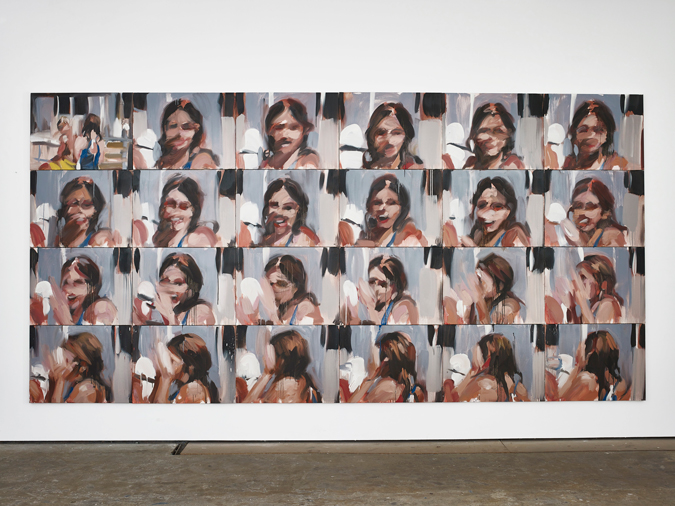 3. What artists have influenced you as a painter?

I regularly find new artists which influence me, but there are some core painters who I have gone back to repeatedly, such as Francis Bacon, Philip Guston, Frank Auerbach, Chaim Soutine, Marlene Dumas, Albert Oehlen, Joan Mitchell, Agnes Martin, Mark Rothko, Raoul De Keyser.

4. Your work also references celluloid strips. How much do photography and cinema inspire you and your work?

In terms of atmosphere I think film has an influence, and the idea of editing is coming into my work more and more, as well as the use of framing and cropping. The sense of rhythm created in film editing also has parallels with painting. Painting is a visual language so images in film and photography can be influential on my work. They are all interchangeable in a way, films can be painterly, paintings can be filmic. This crossover is interesting to me. 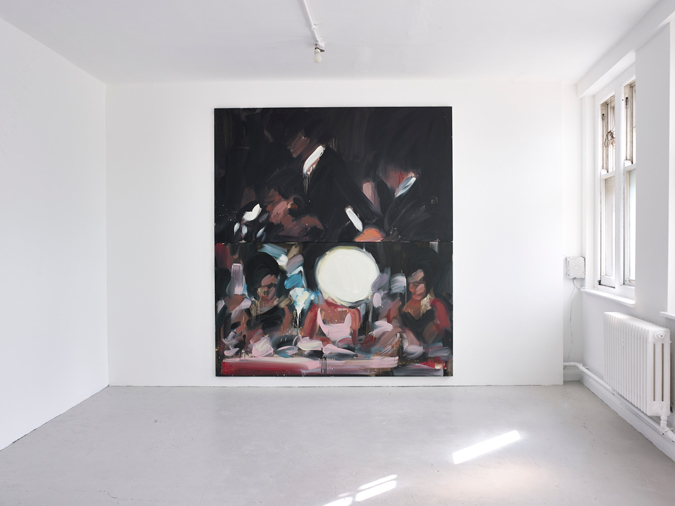 5. Who is your favorite photographer? Movie director? And why?

I love David Lynch for the sense of ambiguity, darkness and atmosphere he can create with sometimes the simplest combination of elements. He started out as a painter and wanted to make paintings that moved so turned to film making – I think his films are very painterly in a way, it’s interesting to see that parallel between film making and painting.

6. Giving us just one name, who’s a painter, director, actor, musician or artist that people don’t really know, but should?

Culver is Lee Stokoe, a harsh drone musician based in the North East (a friend of mine actually!).  He has also played as part of a band called Skullflower who are a bit more well known.  He’s a really well known/respected noise/drone musician, and has run a label called “Matching Head” for many years. Here’s a link to a recent split tape release of his:

… I would also like to mention Lucy Johnson who is a visual artist and musician friend of mine, based in Leeds in North East England, who has been in many different bands/projects over the years. She currently makes solo noise/drone under the name of Smut, and is in Witchblood with Lee Stokoe (Culver). 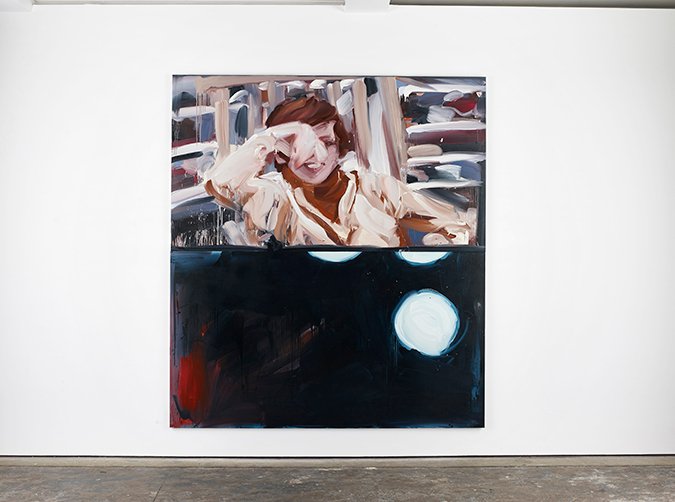 7. What are some trends that you’re seeing in art magazines, shows, and galleries? Which do you like? Dislike?

I like that painting seems to be making a resurgence and is having to hold its own amongst the many other art forms people are working in today. It feels like a good time to be painting and to take in all of these influences.

8. What was the first painting you ever sold? Can you tell us about the experience?

I sold a painting from my degree show exhibition at University in 2001 – a very tiny painting the size of the photograph the image was taken from.

It was exciting to think of the painting going out into the world. 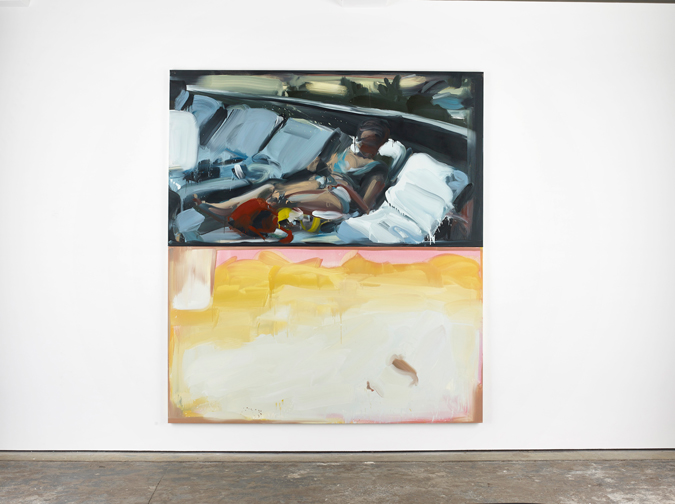 9. Would you recommend painting as an occupation? And what advice do you have for students or new graduates?

Yes, I would recommend it, I get to do what I love most of the time and have a lot of freedom. My advice to students or new graduates would be to make sure you get the best documentation of your work possible. I would also say that it’s good to take risks with your work and push your comfort zone, as this is the best way to keep growing and learning. Looking at as many paintings in the flesh as regularly as you can is really important too.

Now here are some get-to-know-you bonus questions. Feel free to answer as many as you’d like:

10. What’s the funniest or saddest thing that’s happened to you this week?

Nothing that exciting yet but it is only Wednesday…….

11. If you could go back in time and do one thing over, what would that be?

Learn to drive when I was younger!

12. What’s something that most people don’t know about you?

People online might not know that I’m a twin, and my sister Rachel is also an artist and musician. (You can see her work here.)

13. What’s your strangest phobia or superstition?

I only have one which is my fear of small spherical objects, not sure if there is a name for this phobia!

14. Last, but not least, is there anything you want to pitch, promote, or discuss?

I have a solo exhibition “Ellipsis” on at WORKPLACE Gallery, in their Gateshead space until 31st October. 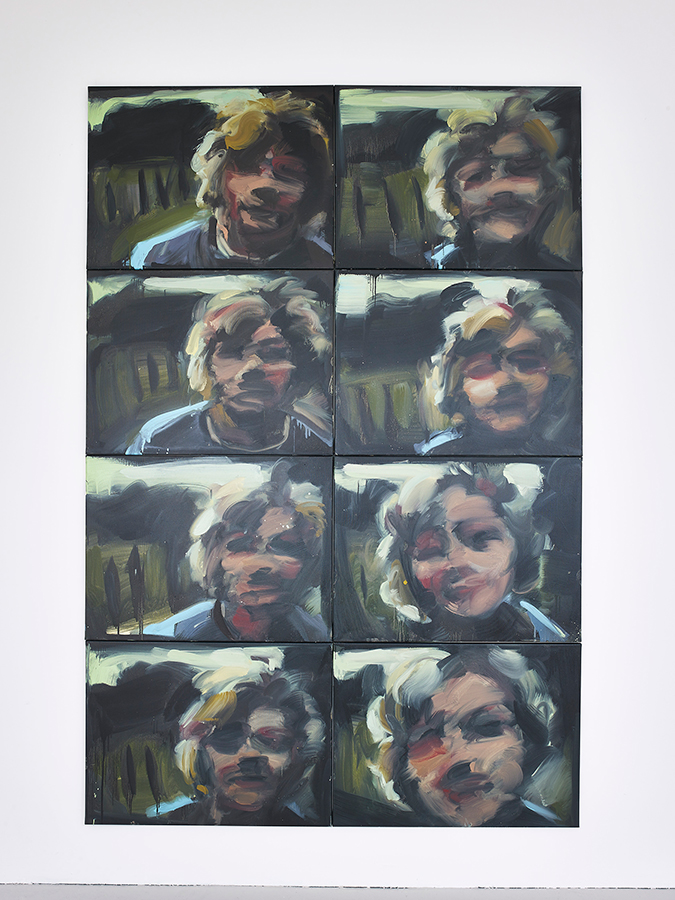 All images courtesy of Laura Lancaster and WORKPLACE Gallery