We thought it might be a good idea to check back in with Juliet Sorensen, whom we interviewed earlier this year, now that her book, Public Corruption and the Law, has been published, and to see what she thinks about the current political situation in the United States.  She was obliging…

So, your new book is out!  Congratulations!  Are you pleased with it?  And what kind of reception has it received from lawyers and law students so far?

Thanks! Yes, I am pleased with it. It was a labor of love (and sometimes just a labor). We’ve gotten very positive feedback from lawyers and anti-corruption scholars so far. The publisher says that it is the first casebook, treatise, or hornbook on the subject, so we hope it fills a need. I’ll be teaching from it myself next semester in my Public Corruption and the Law class, so I look forward to receiving student feedback then.

When we spoke in April, you said this about public corruption and human rights at the national level: “If we believe someone in public office is corrupt, we can act by voting, and democracy can play the role that a court process might not, and we can vote that person out of office. But when the electoral process itself is compromised, that ultimate backstop is thwarted, and the public official remains in power and can begin developing a culture of impunity.”  I had no idea how prescient you could be, as we currently have a president-elect who has himself called into the question the electoral process, as well as an ongoing current recount effort, and a situation in which the popular vote is not determining the election–none of which is going to give our citizens much faith in government as an institution.  What are your current thoughts and concerns regarding this highly unusual election?

I have been hoping that, in our very divided country, the judiciary will be able to play a role in protecting human rights, and the rule of law, and in protecting our institutions, if the executive and the legislative branches cannot or will not.  What are your thoughts on the role of lawyers and judges moving forward?

The courts will play a vital role in our system of checks and balances, as they have in the past. Many of the assertions Trump has made– that he would re-introduce waterboarding as an interrogation technique, that he would imprison and strip U.S. citizenship from people who burn the American flag, that he would withdraw from a range of treaties that the U.S. has signed and ratified–are contrary to law. Absent legislation to implement his agenda, courts will strike it down.

If you could wave your magic wand and change some laws or practices here in the US, what would you do to decrease corruption?  (Or do you have another, better use for a magic wand?)

I would eliminate the practice of patronage, which favors relationship-based governance, including hiring, promotion, and retention, in favor of a meritocracy.

What can the US learn from other countries about fighting corruption?

In 2010, the United Kingdom passed an anti-bribery act that imposes strict liability on corporations for failing to prevent international corporate bribery by one of their agents, absent a showing that a meaningful compliance program was in place. The UK Anti-Bribery Act also permits no exception for facilitation payments, or “grease money,” unless those payments are expressly allowed by law in the country of the foreign office, and no business promotion expenditure defense. The US should study the efficacy and impact of the UK law and consider whether these provisions would enhance our own Foreign Corrupt Practices Act. 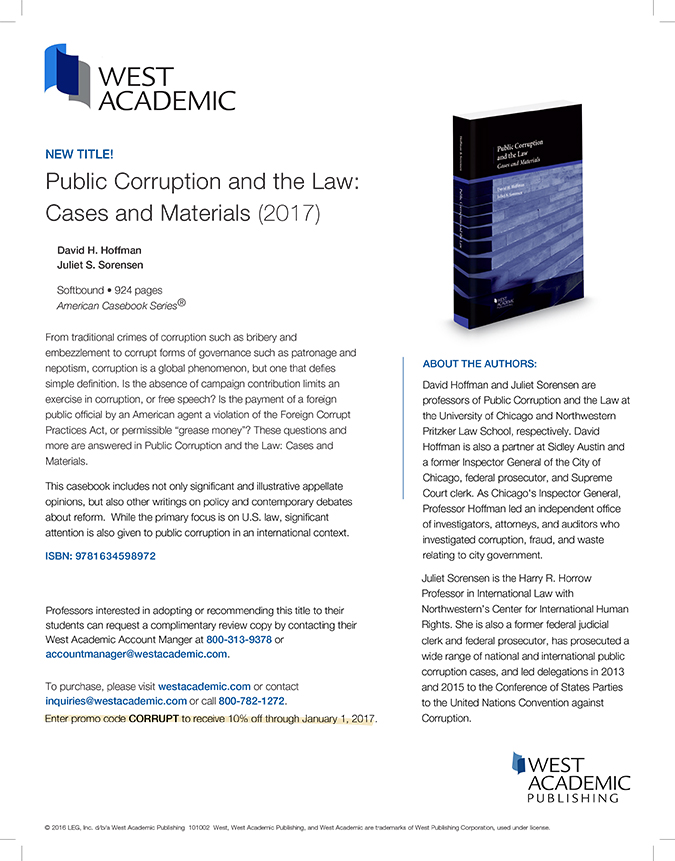 On to some happier topics!  What is your top recommendation for a visitor to Chicago to see or do?

Start with South Indian cuisine on Devon Avenue, then hit the Second City, where America’s most famous comedians got their start.  Finish your evening with ice cream sundaes at Margie’s Candies, which opened in 1921 and hasn’t changed a bit (or so it seems to me).

What is your favorite restaurant in Chicago?  And anywhere else in the world?

On a dark winter night in Chicago, nothing warms you up like Chinese barbecue. My family loves Sun Wah BBQ, in Uptown–the Peking Duck doesn’t get any better. As for anywhere in the world, my favorite place to eat is the outdoor stalls at the Djamaa el Fna, in Marrakech. Pick a stall and choose any number of delicious dishes, all made to order.

What has been your best travel experience?

I’ve been lucky enough to work on issues related to health and human rights in central Mali and traveled to the cliffs of Bandiagara and the mosque at Djenne, both UNESCO World Heritage Sites. The cliff dwellings and enormous mosque built of mud are stunning creations by humanity in stunningly beautiful locations.