Another week, another heaping helping of celebrity yumminess. Dig in and enjoy!

Mariah Carey seems to have found herself a new “Dream Lover.’’ The singer was spotted leaving dinner in little more than a lace bra with her backup dancer Bryan Tanaka recently. According to reports, Carey’s ex-fiancé was jealous of Tanaka and even had him banned from Caesar’s Palace in Las Vegas where Mariah performs. This breakup hasn’t reached Brangelina proportions yet, but stayed tuned.

And speaking of Brangelina, Justin Theroux let his feelings be known about his wife Jennifer Aniston’s  ex-husband.  Justin shared a picture of Nick Flatts’ latest work with a not-so-well hidden message. The message: “F**k Brad Pitt.”

Quick question: what is better than Heidi Klum? Answer: Five Heidi Klums!!! Heidi is known for her annual Halloween bash, where she always comes up with outstanding and original ideas for her costumes. This year takes the cake. She cloned herself!!

Bradley Cooper and Irina Shayk are reportedly talking marriage. The couple have kept their relationship mostly private but have discussed taking the plunge according to E! News. If it means we will be treated to more shots like these, then who are we to object? Just imagine what their kids will look like!

Halloween kicked off and the celebrity world did not disappoint with a week-long parade of skintastic costumes. Who needs candy? Feast your eyes!

Idris Elba shut down rumors that he was dating Madonna with one single tweet. The two were photographed together in London recently, and of course the rumor mill started churning until the actor took to Twitter to post this: “Am I sleeping with Madonna? No motherf—kers…Don’t believe the Hype.” So Idris, what are you doing Friday night?

Oh, Kimmy, how we missed thee. Kim Kardashian is slowly coming out of hiding following her Paris robbery. The reality star posted a selfie to Facebook plugging a phone case. Robbery or no robbery, a girl still has to earn a living.

In “horrifying” news out of Washington category (and no, we do not mean the election) President Obama seems to be enjoying his last few months in office, upgrading his jeans game and rocking out to Thriller during a Halloween event at the White House. 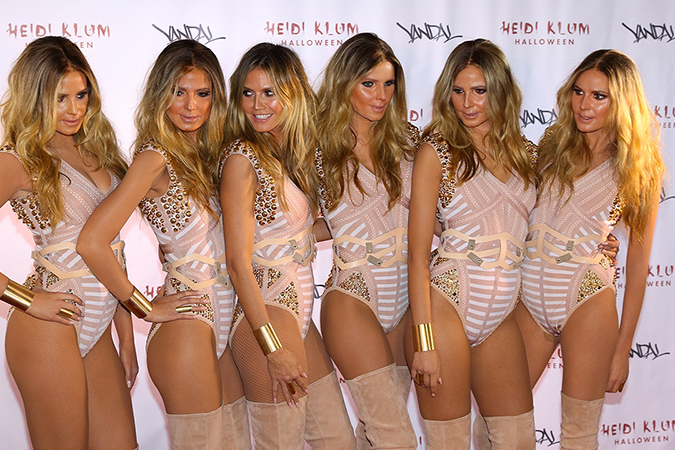