We have a formula to determine if a song is good.

One, it has to make you stop what you’re doing and take pause.

Two, it has to sound good when it’s strummed acoustically.

This band crafts stirring tunes (sung by the phenomenal Jordan Macdonald) and plays extraordinarily tight — performing just as good live as they do on their albums.

We really want to move this article along (and get to Jordan’s interview below), but before that happens we have one more glowing thing to write.

If you want to feel like you did pre-COVID and understand how music and live performances have the capacity to lift you to a higher plane, watch Jordan and members of Texas King. Honest Heart Collective, Lost in Japan and Daytrip sing a cover of The Killers’ “When You Were Young.”

The video clip (recorded during a holiday show in 2019) will bring a hopeful tear to your eye. It will also make you want to visit London, Ontario.

Keep it coming Texas King. You’re on a royal roll. 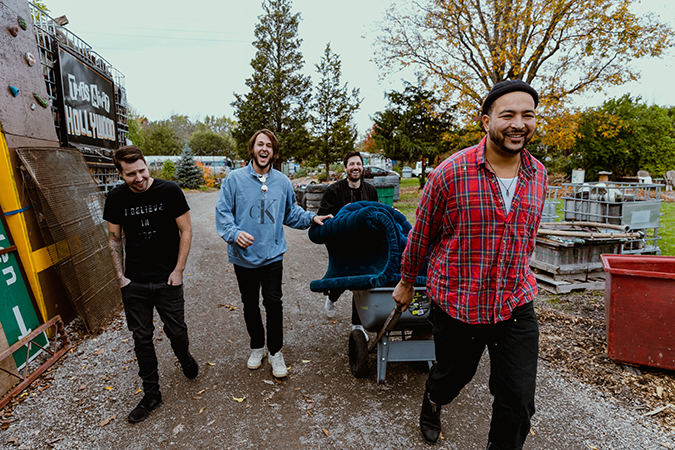 When I was a young, young kid my dad’s friend gave me an inflatable electric guitar that was bright orange. I would take this thing to the mall, church, the dentist, friends’ houses, etc… It would constantly get popped and I’d have to put duct tape to patch the holes eventually we had to throw it out and my dad allowed me to start messing around on grandma’s old classical guitar!

When I fell during a very high-energy show at a small venue in Washington DC and snapped the headstock off my brand new guitar… on day 3 of our biggest tour.

I love the excitement of a new city every day. Love meeting new people and playing at new venues. The food in each different city is something I always want to check out. Things that I dislike are being in the cramped van. As a 6’4 man with long legs it really hurts. Also with the van … it STINKS. And I hate no-shows for guest list spots. Pet peeve there.

My favourite album of all time (tough one) but I got to go with Champ by Tokyo Police Club.

Probably the Canadian embassy to get me the hell home, haha.