There was a recent report where scientists concluded that our Milky Way galaxy will someday converge with the Andromeda galaxy, basically melding the two cosmic wonders into a super galactic swirl of stardust and a quite possibly a blur of collisions. While that’s a bit of a downer, convergence isn’t always the worst thing in the universe.

For instance, the other day, while I was wondering aimlessly down the florescent-tinged aisles of Wal-Mart, I too saw something my mind couldn’t initially comprehend: Chips Ahoy! cookies stuffed with Oreo’s creamy goodness.

I literally stood in front of the display with my mouth agape (drooling a bit) and had to ponder exactly what I was looking at.  I sort of imagined myself as David Bowman in Kubrick’s “2001: A Space Odyssey” as he entered the monolith.

It could have been months, minutes or a millennium,  but as my hand slowly reached out to grab this otherworldly delight, I’m pretty sure “My god, it’s full of creme” escaped from my lips over and over and over again. In that instant, galaxies collided.

Just let that sink in: the innards of Oreos, surrounded by the chewy chocolate chip goodness of Chips Ahoy! I know, it’s almost too much to process. Not only did it take me a few days just to open the package…but also left me a bit stunned and until this time, unable to put into context what this means to our society at large.

Two mighty brand-name cookies—in fact the two best selling cookies on the market—coming together to create a new form of cookie-life—a feat that is not only historic but unprecedented. I harken back to all the fights I’ve had in the past about which cookie is better—Oreo or Chips Ahoy!—and now I realize none of that matters.

In fact, over a decade ago, Chips Ahoy! tried something similar with their CremeWiches product, which was basically two cookies smashed together with a generic blob of creme. Like many of NASA’s prototype rockets, it was a failed first attempt, and no where near the feng shui perfection the Oreo creme brings.

We have reached a state of cookie zen, of cookie equilibrium. While this might not solve world peace, it is a step in the right direction and a constant reminder of what can be done if we open our minds to new solutions and come together as one. Make love, not war.

I know what the naysayers are thinking right now: Sure, sure, but it can’t be good, can it?

I thought the very same thing, which is why it took me so long to crack the seal. The reality of the sweet creme dream of Nabisco’s Oreo, which has been around for over a hundred years, enveloped within a chippy chocolate delight of Chips Ahoy! which has been a staple for the past five decades, couldn’t possibly live up to the culmination of such cookie royalty.

Yet I’m here to tell you that the outcome is…something wonderful. Cookie purists be damned…this may just crumble your constitution. And I haven’t even tried dipping them in milk yet! That is the milky way…that is the only way!

I’m not saying that when our galaxies collide in 3 billion years that the outcome will be a positive one for earth and our solar system beyond, I’m just saying that based on the scientific evidence of this particular model and variant–which I would have seriously doubted beforehand–makes a case that there is a grand order of things…and that we should trust an outcome that has a chance to be out-of-this-world.

At the very least we should start a Kickstarter campaign to build a spaceship, send it into deep space and put the recipe for the Chips Ahoy!/Oreo cookie in there for other distant and future civilizations to enjoy. It’s sort of our cosmic duty.

Hey, it took 13.8 billion years for this delectable cookie to come into existence, and while we didn’t know we needed it, I’m certain we will never be alone without it in the universe again. 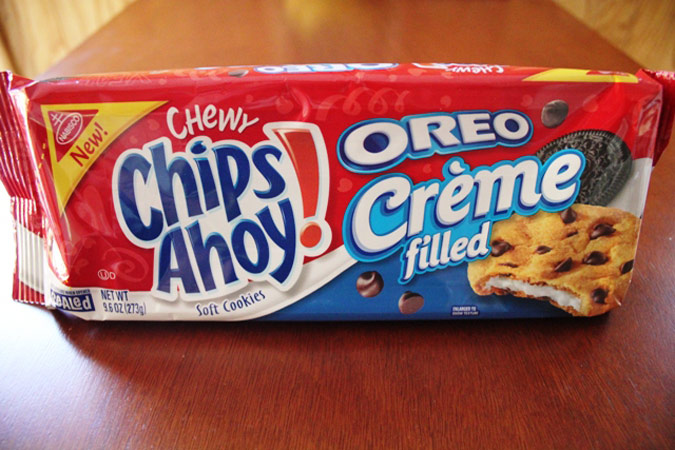 Note: the author has not been bribed by Nabisco or its subsidiaries, but is certainly not above that type of payola.