This week Gloria is writing about one of Dave Chappelle’s comic performances in the City of Lights.

Comedian Dave Chappelle is to me what musician Teddy Pendergrass was to the ladies in the 70s.  Ladies went crazy when Teddy Pendergrass got on stage and it was customary that women would throw their panties at him.  Il était canon ( he was hot).  Just to know.

Except I wouldn’t advise you to throw your panties at Monsieur Chapelle on stage because Madame Chapelle would probably cut you.  Or, maybe not. I don’t know.  I feel like I know Elaine Chapelle just by the way Dave talks about his wife.

I also know that  Elaine Chapelle knows how to cook duck confit.  Just to know.  I can only imagine what a family dinner at Chez Chapelle would be like?  My two favorite pastimes in life are eating duck and laughing.  I would probably choke to death eating and listening to Dave’s banter.  What a great way to go.

It has been a difficult few months here in Paris, but I kept saying hold on till Dave Chapelle gets to Paris and performs at the Trianon on February 27 and 28.  It is sort of like when you are in pain and you make an appointment with your chiropractor and you just have to hold out and you know you will be adjusted and feel amazing afterward.

That’s how I felt like going to see Dave Chapelle on February 28th, here in Paris.

On my way there  I pictured drinking champagne with friends after the show and talking loudly at some bistro bar and yelling, “Dave said this, and then Dave said that, and hardy har har.”  One thing for sure I knew I was going to be leaving the theatre crazy happy.

This did not happen.  Instead, I left the theatre feeling un peu triste (a bit sad).  I still went to meet my friends but passed on the champagne.  It was definitely going to be a Pinot Noir kind of night to soothe the blues and the mean reds.

As for the show, I can tell you that there were a couple of add ons to Chappelle’s schtick in “Sticks & Stones,” his amazing August 2019 comedy special.

It has been proven that by watching “Sticks & Stones” — and responsibly consuming Pinot Noir — you’ll cure the mean reds in less than 10 minutes and add years to your life.

The same feeling washed over me at Chappelle’s live show.

Here, I was laughing like a fool… but then…

But then… he told a story about his friend, Daphne Dorman, a transgender comedian who committed suicide this past October.

My night completely changed and I could not get it out of my head.

I thought about all the shit he got from various groups for his “alphabet people” joke in “Sticks & Stones.”

And I thought about Daphne, who was mentioned in that amazing comedy special.

Yeah, you know, it's just that moment when you realize that after Dave Chappelle talks about meeting you in the secret ending of his new Netflix special, you see your photo appears immediately after Barack Obama's photo in the credits. 🤪 . . #sticksandstones #davechappelle #netflix #imthatdaphne #funnygirl #standup #comedy #notabrittlespirit #itsgettinreal

And I thought about Naia, the young daughter that Daphne left behind.

It seems there is a movement now against comedy.  What jokes are allowed and which jokes aren’t.  Really?  There are posts all over saying, “You don’t have to be offensive to be funny.” Um, you kinda do but the good news is that you can always change the channel?  I change the channel when Creflo Dollar or Joel Osteen come on TV.  It’s just not my schtick.  Dave Chapelle is my schtick.

I think stand -up comedy will have to be performed in a speakeasy one day because everyone is always in trouble.

There will be a code to the comic on stage when the comedy police come in and every comic will have to switch and do Henny Youngman jokes. Here’s one: Why do Jewish men die before their wives?  They want to.  #allwivesmatter

Thanks also to Tiffany on Team Chapelle.

And one more thing, damn it…

To quote another genius, Carrie Fisher:  “Take your broken heart, make it into art.”  And thanks for doing just that, Dave Chapelle.

“Sadly, this was the only poster for Dave and no pictures allowed inside.” — GS/Jr. 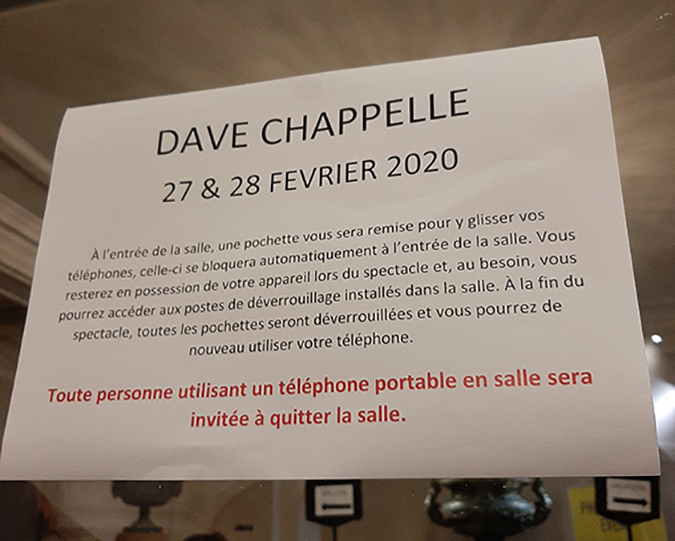 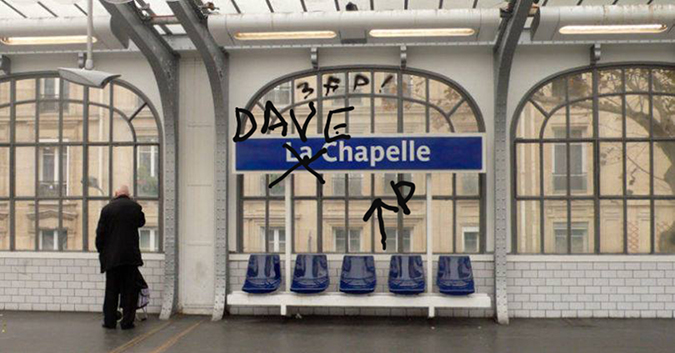