We thought it might be interesting to check in with aquatic ecologist Carrie Roble and see what else is going on in Hudson River Park these days.  She did not disappoint!  Here’s what she had to say…

Great to talk with you again!  Thanks for taking the time!  So, first, what is your new, or new-ish role at Hudson River Park?

I’m the Vice President of Estuary and Education. 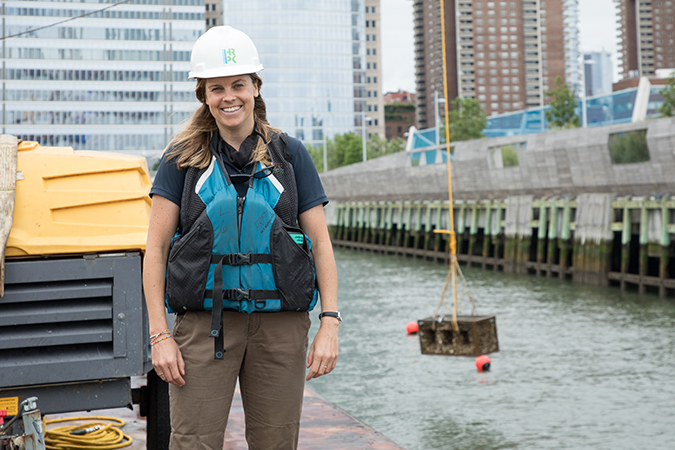 And can you tell me about the Tribeca Habitat Enhancement Project? And what is the Hudson River Park Trust’s role?

Hudson River Park recently completed the Tribeca Habitat Enhancement Project, which is intended to create a habitat for oysters and to increase biodiversity in the estuarine sanctuary.  We have installed 200 oyster habitat structures, which added over 11 million oysters to the River.  We have five types of structures as a pilot program to better understand how we can best support healthy oyster reefs and juvenile oysters.  We also have to support fish populations–there are over 85 species of fish that live and migrate through the Park’s waters.  And we are also learning how to make a corridor, connecting piers–we’re working on making a continuous oyster reef.  We often hear about habitat fragmentation in the rain forest.  We have a similar issue…in the Hudson River there are lot of human impacts, pollution, lost habitat variety–we are trying to link and connect our habitats into a corridor, stretching from Pier 26 to Pier 34.  And we’re doing a lot of research focused on this segment of the park.

Our plan is to monitor, conduct research, understand how oysters grow and thrive.  We’re hoping for recruitment of new oysters, and will be learning about the impact on fish populations and on other River animals, like mussels and barnacles.  Our plan is to try to understand the whole ecological impact of the project.  And of course we’re coordinating with regional partners.  It’s important for us to consider project goals, and we’re sharing data, methods, and lessons learned, with the New York State Department of Environmental Conservation, the Hudson River Foundation, and the Billion Oyster Project.   And we’re making sure our monitoring methods are comparable and that we can learn from each project and adopt those lessons to the next project.  It’s so crucial that we’re communicating and cooperating–we couldn’t accomplish this without the other non-profits and government agencies.

I understand that oysters really help clean the water–they are great filters, is that right?

Yes!  Oysters are a marvel!  They filter the water, cleaning out pollutants. One adult can filter 50 gallons of water a day.  That’s a huge benefit!

But also, we’re learning how oysters can create a habitat to benefit other animals.  And, when they’re installed on a large scale, they protect against coastal flooding and storm surges, and they help mitigate climate change impacts.

How much of a difference are the oysters making?

It’s hard to assess that impact–the water has improved over decades, thanks to the Clean Water Act and regulating point source pollution.  And there are still challenges thanks to historical pollution and the sewer system.  Oysters are helping with that, but in addition, they’re a keystone species–and when they thrive, ecosystems benefit.  As water quality has increased over time, the impacts have included an abundance of diversity–fish and crustaceans alike.  So filtering is great and important, but oysters have other important benefits as well.  And we need to complement oysters with other tools like green infrastructure.  We need to think comprehensively about mitigating the impact of the sewers and getting political will and dollars to improve the infrastructure.

Poor oysters!  We ask a lot of them!

We do.  And we want to think about innovative ways to improve their habitat.  Other organisms can be equally important, and other projects.

Can we eat them someday? In a hundred years?  Or never?

I believe it’s possible, but it’s a long way out!  We’ll need a lot of changes first, including our sewer system!  But that doesn’t negate how important oysters are now.  And in Long island, and Connecticut, we can locally source oysters to eat.  And maybe in 50 or 100 years there could be true Hudson River oysters on menus.  That’s a big dream, though–we’re not talking about them now as something to eat.  They’re not to harvest– they’re doing their job! 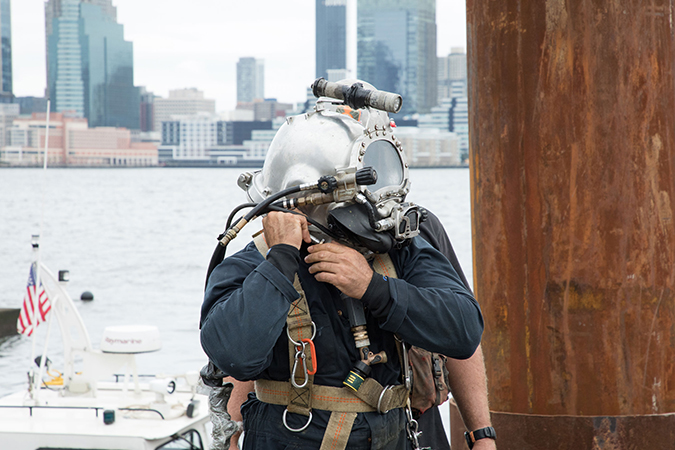 So it sounds like you are doing some cool, long-term projects and looking forward into the future.

Yes!  We’re working to make changes so future generations can enjoy our environment and local waterways.  New York City used to be the oyster capital of the world.

We’re hoping to add more reef complexes and end up with more viable ecosystems.  Our hope is to build a long-term, self-sustaining habitat.  And this is all part of bigger goals–fighting climate changes, while collectively mitigating some of the continuing pollution.

How does your work with the oysters line up with your work on Park Over Plastic?

It’s not super obvious but there are connection points. As we reduce plastic waste, through education and working with communities to make our practices more sustainable…for oysters there are a lot of similar themes.  Our projects are rooted in community–-community members help us monitor the oysters.  As we talk about environmental impacts over time and we consider solutions, both reducing plastics and increasing oysters are incredibly important for health and habitat diversity.

Regarding climate change–we are supporting climate solutions through Park Over Plastic, trying to reduce trash in landfills.  Oysters protect our shoreline and reduce flooding.  Both projects align and are part of the overall conversation.

And there are future areas for exploration, too.  We’re working on trying to understand what happens when microplastics are ingested by oysters.  They filter for pollutants and they are also filtering microplastics.

So I know you have citizen volunteers and work with non-profit organizations and government agencies.  Are there businesses involved and contributing?

Yes, the Billion Oyster Project is working to collect shells from restaurants.

And there’s a project called SOAR (Supporting Oyster Aquaculture and Restoration) which partners with businesses.  A lot of restaurants were challenged in the pandemic and so were oyster farmers since so many restaurants buy oysters–so we bought them, ready to reproduce in our waters, to improve local habitats.

Sounds like a win/win/win! That’s great! So how are the oyster shells used?

We use oyster shells to fill the oyster cages…we put them into huge shipping containers, at the right temperature, and juvenile oysters settle on the oyster shells.  Oysters attract oysters.

I think oyster shells used to be a building material, is that right?  I think I’ve seen references to that in old books.

Yes, they were–often used for fill. Now we don’t use them for fill, it’s not a practice we’re continuing, but they are used to shoreline resiliency, reducing erosion. 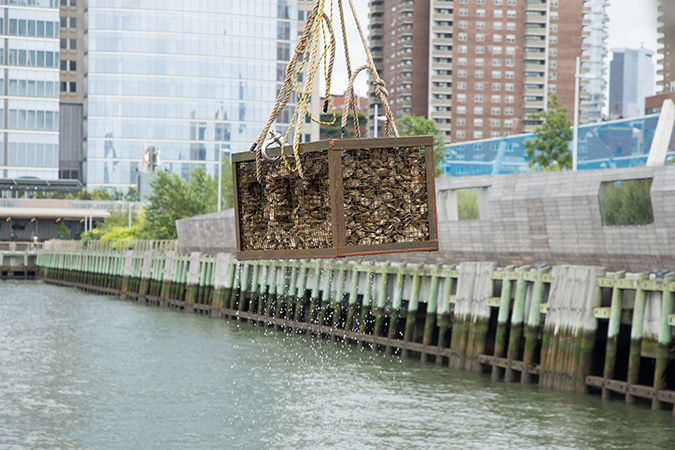 How is Big, the local giant oyster doing?  Is Big still alive and thriving?

Big is still a celebrity!  Living the good life off of Pier 40.  Sometimes Big makes appearances at events or in the Pier 40 Wet Lab.  When we bring Big up, it’s usually covered in mussels, barnacles, other oysters.  But Big is continuing to grow and thrive and has grown a half centimeter in the last two years.  An inspiration to push other projects in the region!

How old is Big, approximately, and just how big?

About 15 years old and over 8 inches long!  Big has initiated a bit of a competition, with other sites looking for big oysters.  It’s friendly but we’re competing over who has the biggest oyster! A leaderboard that I actually care about.

What is the lifespan of an oyster?

They can live upward of 20 or 30 years.  Locally in our waters, diseases also impact oysters.  They don’t usually get so big as Big because of waves of disease, which can impact a generation.  So one thing that’s kind of remarkable, is that Big is a survivor.

Go Big!  I’ve never thought about oyster diseases before. But all living things can get sick, so it makes sense.

As we add oysters, we also are invested in long term success.  We need genetic diversity in the oysters, so they’ll be more resilient in the face of disease and other stressors.

Are all the oysters in this project the same species?

Yes, they are all eastern oysters and native to New York City and its waters.  Oysters have different genetic makeups, though, and when we are seeding, we get oysters before their spat stage, before they settle, and we get them from different aquacultures around the east coast. Ours are from Maine.

Thanks, Carrie!  I wish you and the 11 million juvenile oysters all the best in Hudson River Park and the New York waterways! 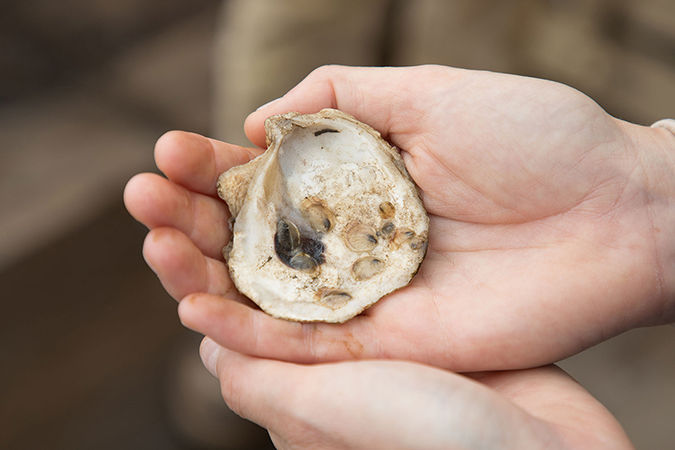