Peru is one of those old fashioned countries where people are very proud. They are proud of their culture, their cuisine, and most of all, their cocktails. They also drink and enjoy everything they are proud of, rather than relegating them to tourists.

It was in Lima where a well-heeled local (actually a rock star!) told me I must go to a Peruvian dinner dance show… and then another local actually took me to one… with her sister, her mother, her father, her uncle and her ex-husband’s cousin!

For me, Lima was the first town (perhaps other than Moscow with their vodka) where they ordered pisco sour with every meal — not just for the visitor but also themselves. It is also the first town where I was taken to a local crafts market, and actually bought a ton of amazing stuff! 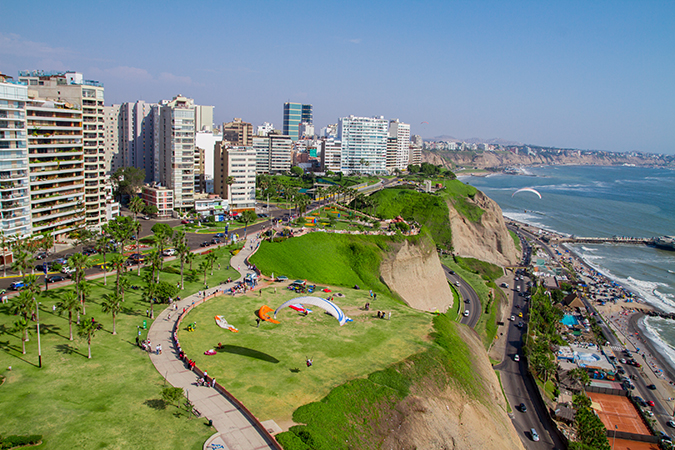 Miraflores is the upscale district of Lima with shopping and restaurants, but it is a bit spread out and you will want to have a specific destination in mind. Most of the restaurant recommendations I received were in Miraflores, as well as the hotel and shopping options.

Barranco on the other hand is Lima’s chief romantic and bohemian district, where you can just meander along the pedestrian streets and winding stairs leading along and towards the beach and back. The most famous landmark here is Puente de Suspiros, the Bridge of Sighs, a small wooden bridge with grand mansions on its sides and a view to the sea. Legend goes that a wealthy man’s daughter living in one of these grand houses fell in love with a lowly street sweeper. Her father forbade the union, and she lived out her days as a spinster, waiting at her window for a glimpse of her beloved. Those who walked across the bridge could hear her plaintive sighs. 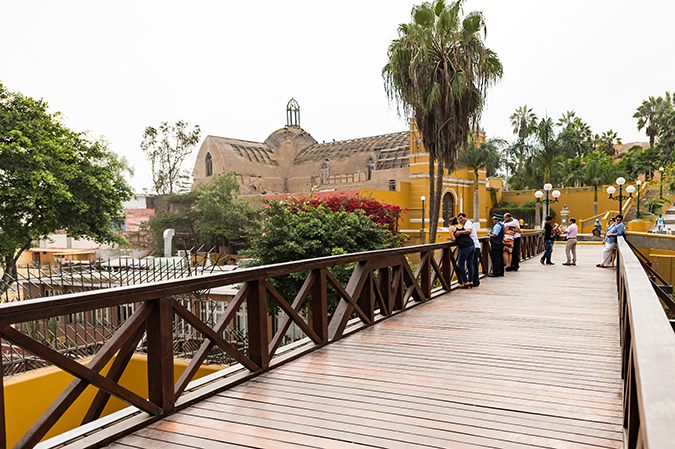 The city center is very hectic and colonial. There are two main squares – Plaza de Armas (Plaza Mayor) and Plaza San Martin – that are worth seeing especially if you haven’t seen a typical South American square before. While I’ve seen many squares in my life I bumped into a special treat here as there was a traditional parade dance going on the day I was visiting! As I said, the locals here really treasure their tradition! 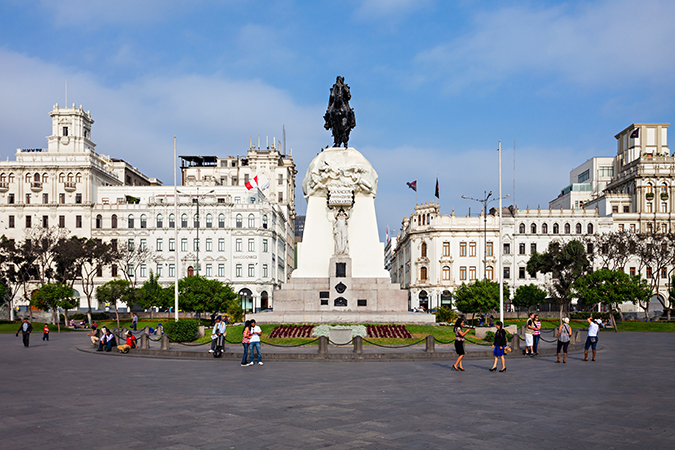 If you are in search for the best ceviche, bear in mind the famous spots with the freshest fish are usually simple establishments only open during the day. Ceviche will also be found on every menu at the fancier restaurants also, but it may not be what you are looking for if you have already been exposed to the creative art of ceviche from the likes of Nobu or Sushi Samba, and the many followers spawned by them. 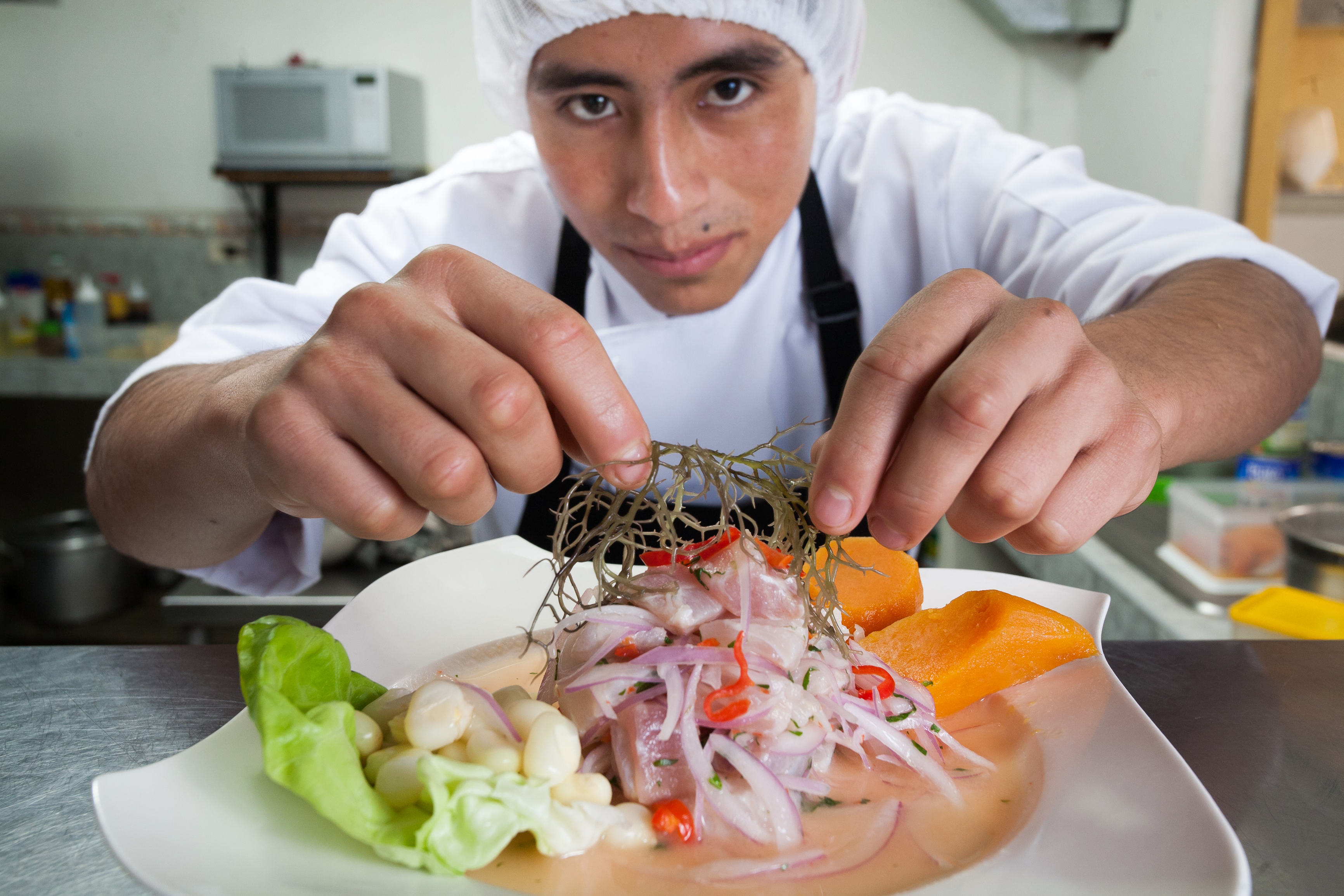 Now here are a few recommendations:

For a dinner dance show go to Brisas del Titicaca  or La Dama Juana. My hostess told me her favorite dance was the Marinera, a romantic dance whereby a man and a woman wearing seriously gorgeous black and white outfits with the woman’s dress spreading out wide like a fan try to seduce each other with a handkerchief. But my favorite had to be the Black Peruvian dance called the Alcatraz. In this dance several couples come on stage and chase each other around trying to light a fire on their partner’s butt. So playful and fun, with constant shaking of the booty to make sure you don’t get lit on fire! 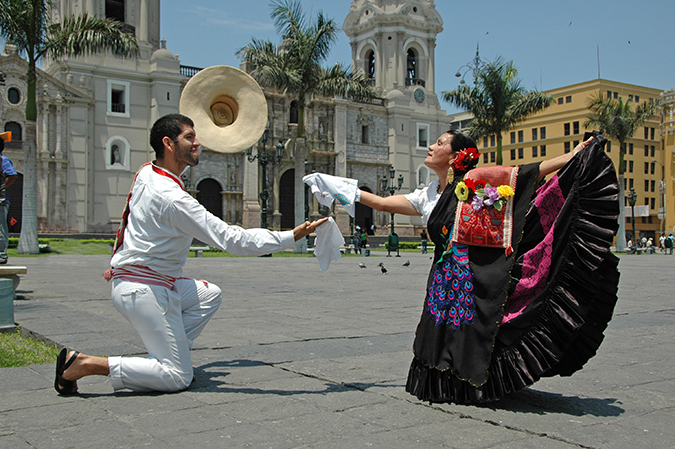 For best ceviche, go to El Mercado or La Mar Cebicheria. Both of them, as warned, are only open during the day.

And restaurants, if you’re into trying out local food and especially if you like sea food, these are high-end awesome places, mostly in Miraflores.

Cala is on the beach, you can enjoy the sunset and listen to the waves all night long as you dine. After dinner you can also go to the disco lounge downstairs and party all night long.

Tanta is actually a chain restaurant and you will find it in every district in Lima. And I’ve actually had the pleasure of having brunch at Tanta in Chicago, too!

La Rosa Nautica is on the water right where the surf breaks, go during the day and you will be enjoying your pisco sour and ceviche while watching the surfers to your left and your right.

Amor Amar is an upscale restaurant actually in the middle of Barranco.

Don’t miss the local crafts market as I said. I got buffalo horn jewelry as well as serving spoons, a handwoven lambswool and cotton outdoor carpet, a grand alpaca fur hat, black and white Peruvian pottery, and much more. The countrymen are still very simple and essentially sell handmade goods at a ridiculously modest price. You will not find anything made in China over here – my very important rule of travel when it comes to local crafts.