Bollywood is represented by the Khans today – Shah Rukh, Aamir, Salman, Irrfan, and boasts of a coterie of interesting young, new talents like Ranveer Singh, Ayushmann Khurrana, Ranbir Kapoor, Amit Sadh, Varun Dhawan, and the like.

But long before the contemporary culture of Indian movies- wherein present stars prevail in an age marked mostly by costume dramas, subject-driven narratives in the guise of often mega-buck spinning potboilers (that could be labeled as “showy” films) – Bollywood existed in an era of rather simplistic virtues.

Things were simpler, egos prevailed but to an extent, rivalries existed but weren’t used as a reason to lash out on contemporary actors and, stylish actors existed with a sedate presence about them. Nothing was loud or “in your face.”

Among the yesteryear’s charmers was Vinod Khanna, an Indian screen legend who passed away just days ago in Mumbai due to bladder cancer, aged 70.

In a career that spanned four and a half decades, we saw the Indian star establish his credentials, as not only someone who was ruggedly handsome but as an actor who was also an intense performer. But, Vinod Khanna will perhaps be most remembered for being the only actor who came closest to truly matching Mr. Amitabh Bachchan’s fame, talent and popularity – just when during the peak of his popularity in the 1970s – he suddenly renounced the world and took the hitherto-less explored path toward spirituality.

Only to return a decade later and don acting gloves again!

If there was one Bollywood actor (apart from gorgeous men who could play a king very naturally – a la Shashi Kapoor, Shammi Kapoor or Feroz Khan), then it was Vinod Khanna.

And he did just that in this important historic drama, among the most memorable and least appreciated of his movie career.

As king Rana Bhojraj, ruler of a powerful Rajasthan Kingdom, Vinod Khanna played a complicated character with grace and poise–a man entrapped by the majestic beauty of Indian spiritual poet “Mirabai.” His wife, played beautifully by Hema Malini, was a “Sanyasini” (an ascetic) disenchanted by life and devoted to Lord Krishna, one of the most powerful Indian mythological deities ever.

Displaying the heartbreak, anxieties, fiery temper, and the obvious disenchantment arising from an unfulfilled marriage, Vinod Khanna lorded on the silver screen with a kingly charm.

Imagine being taught by a teacher you’d rather first date and then listen to, only to be entrapped by his intellectual gifts? That was Vinod Khanna as lecturer Pramod Sharma in Imtihan, as a man who leaves his family business and all material trappings of life to devote his energies toward making capable individuals out of his students.

Romance blossoms between student and professor in this emotionally riveting account akin to a crop post a season of rich harvest, with Vinod Khanna fronting one of the most breakthrough roles of his career.

An actor’s job is to not just appear as a perfect hero material, doing the usual oddball romances, quirky comedies and sipping expensive liquor in elitist eateries.

You measure an actor’s worth from his ability to don the grey shades just as well.

In doing the above in Mera Gaon Mera Desh, Vinod Khanna bridged the cultural divide of India – between the urban and rural masses through an epic villainous avatar that only he could do justice to as the dreaded dacoit Jabbar Singh.

Those chilling glares and drop dead gorgeousness that women often fancy in “evil men” made him an actor of immense promise.

A film that was so good for its time that not only was it a huge hit during its release but would be a mega-hit had it been made today. This heist movie had everything – a partner-in-crime (Feroz Khan), unfurled romance, bitter rivalry, song and dance sequences, heartbreaks and some flamboyance.

Looking for more? How about another article in our Indian cinema series?

* Do You Know King Khan? A Look At India’s Mightiest Movie Actor

* Who Is Aamir Khan and What are Some of His Best Films?

* Do You Know Akshaye Khanna? A Look at India’s Star Character Actor

Are there other Indian movies you love? Contributor Dev Tyagi can be contacted at dev@newswhistle.com 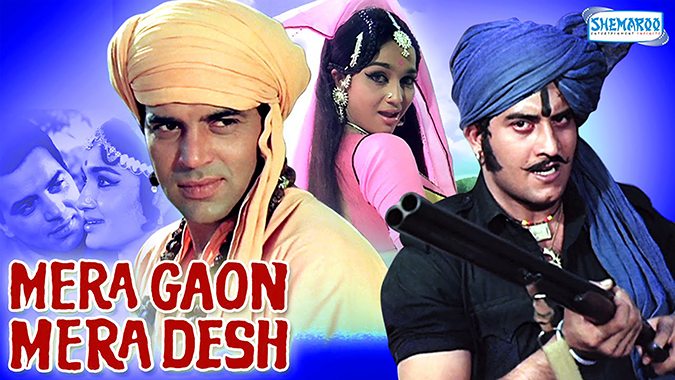