Jonathan Halloran, CEO of American Homebuilders of West Africa (AHWA), had told me a bit about the work his company has been doing in Guinea when I saw him in Chicago last year. When he was in NYC for meetings, I had the opportunity to also meet his partners, Mamady Doumbouya (Chairman) and Robert Hornsby (CFO) at Filicori Zecchini, where, if you don’t look out the window and ruin the illusion, you can imagine yourself having a coffee break in Italy.  It was a warm and pleasant place to talk on a cold January morning, and they were fascinating and enthusiastic conversationalists.

Mamady’s a native Guinean, though he’s lived in the U.S for over fifty years (which means, as he likes to point out, that he’s actually been here longer than either of his two American partners).  Jonathan and Bob were both Peace Corps volunteers in West Africa, and have maintained strong ties to the region.  Together, they’ve got business, real estate, construction, economic development, insurance, and entrepreneurial experience…and, undeterred by the current Ebola crisis, they’re building residential and mixed use developments for the emerging middle class in Francophone West Africa.

The company is starting in Guinea, but the plan is to, eventually, build homes (and communities…in places lacking in public infrastructure, they will need to provide sewers, utilities, parks, and schools) in Senegal, Côte d’Ivoire, Burkina Faso, Mali, Niger, Benin, and Togo.

The leadership of AHWA believes that these countries (which have been relatively underserved by U.S. and European investment in recent decades) will provide good opportunities for investors going forward, and that they’re looking at some tremendous growth potential.  They’re hoping to do well while doing good, and generate a seriously beneficial social impact, delivering a quality product, and allowing residents to achieve home ownership considerably faster than would otherwise be possible.  Plus it’s a fabulous excuse for them to make frequent trips back to a part of the world that they love. 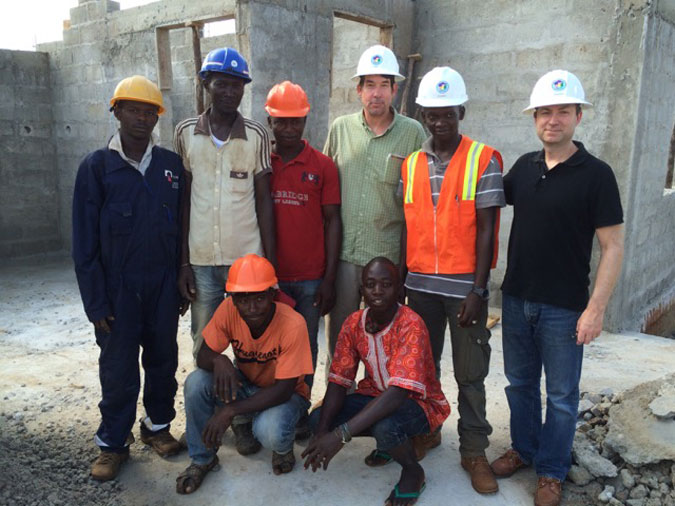 1. What are the risks of building in Guinea?  Are you worried about the workplace, quality of materials, corruption, etc.?

Jonathan: It is funny that some things we thought would be hard, like getting a building permit, are quite easy, straightforward processes in Guinea (more so in my experience than in Chicago).  There are, of course, political risks in a newly democratized country but as I like to say, there are political risks in most major U.S. cities as well.  Primary building materials (cement, sand, gravel, reinforcing steel) are readily available and of good quality.  Finish materials like tiling and plumbing fixtures require more careful selection and are expensive and sometimes of poor quality.  There are lots of counterfeit materials, like electrical breakers, where you have to be careful that you know your suppliers well.  It takes a bit of detective work, but as long as you are persistent, you can get the things you need.   Workmanship varies and requires careful supervision in some cases.  Trying to get international quality work in areas like tiling can be a challenge, but we find that with enough follow up you can get the quality you want.

2. I know you’re not worried about your own health, but is the Ebola health crisis having an impact the work you are doing?  Has Ebola hit close to home for you in any way?

Jonathan: Ebola is a media sensation and obviously a tragedy for anyone who contracts it, but thankfully touches a very small portion of the population.  To put it in context, Guinea has lost fewer than 1,500 people to Ebola in the last twelve months, while in the United States about 36,000 die annually of the flu.  I personally do not know anyone who knows anyone who has died of Ebola.  The most noticeable effects on business that I have noticed are the pervasiveness of hand washing (we in the U.S. could learn something from this) and the lower levels of physical contact with things like handshakes.

3. I had made the analogy that you were trying to create Levittown in West Africa.  Is that a fair comparison?

Jonathan: Actually, this first project is a bit higher-end than that; these houses are more expensive (relative to the income in the region) than the new homes were during the explosive growth of the American suburbs.  But we are planning, in our future developments, to build more affordable housing.

4. Please tell us about what these first houses are like.

Jonathan: The models we are building now are about 140 square meters (about 1,500 square feet) of indoor living space with about 50 square meters (550 square feet) of additional covered terraces.  Price is U.S. $122,700 (US) (about 859 million Guinean Francs). It is a three bedroom, three bath with both indoor and outdoor kitchens, completely enclosed courtyard, grid connected electric, city supply water and micro on site wastewater treatment facility.

We are putting a lot of focus on appropriate landscaping to minimize runoff and create good shade for passive cooling.  Also, the house is oriented to take advantage of the prevailing WSW wind. 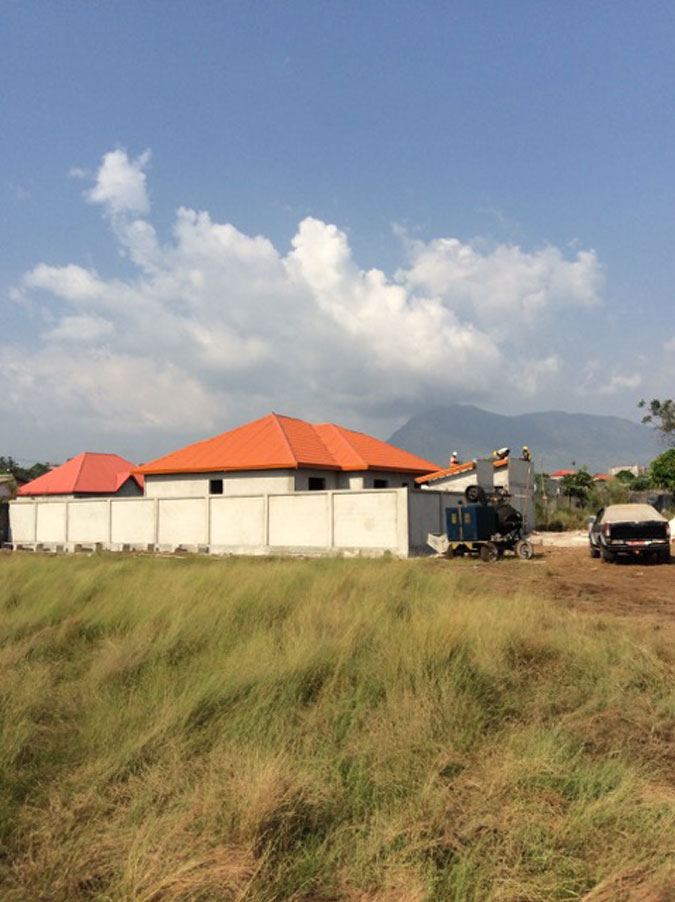 5. What does home ownership typically cost in Guinea?  What kind of price ranges can purchase what kinds of property?  And if gross domestic product per person is approximately $1,100, what kind of income will your initial customers have?

Jonathan: Very few people have a path to homeownership in Guinea today because of lack of efficient building and financing.  Most people rent, with rents varying from $30 U.S. per month for a tiny room with shared facilities to $4,000 per month for a 2,700 square foot apartment in a high rise.  Our first development is geared toward upper-income people with either family (i.e., both spouses’) salary of about $25,000 annually, the Guinean diaspora in the U.S. or Europe, or local traders, merchants, or entrepreneurs with enough cash for a large down payment.  We are targeting a much more moderate income in our next development where prices will be closer to $40,000 per home.  We think those homes will be purchased by salaried professionals like teachers, nurses, and accountants.

6. As you are building communities, how are you to be sure that no one is going to tear down the homes you build and put up McMansions (or the West African equivalent)?

Bob: They do have zoning in Guinea.  It’s not as well-developed as it is here in the U.S., but we are striving to make sure that the owners can be sure to retain their views and the quality of their environment.  These are going to be planned communities. 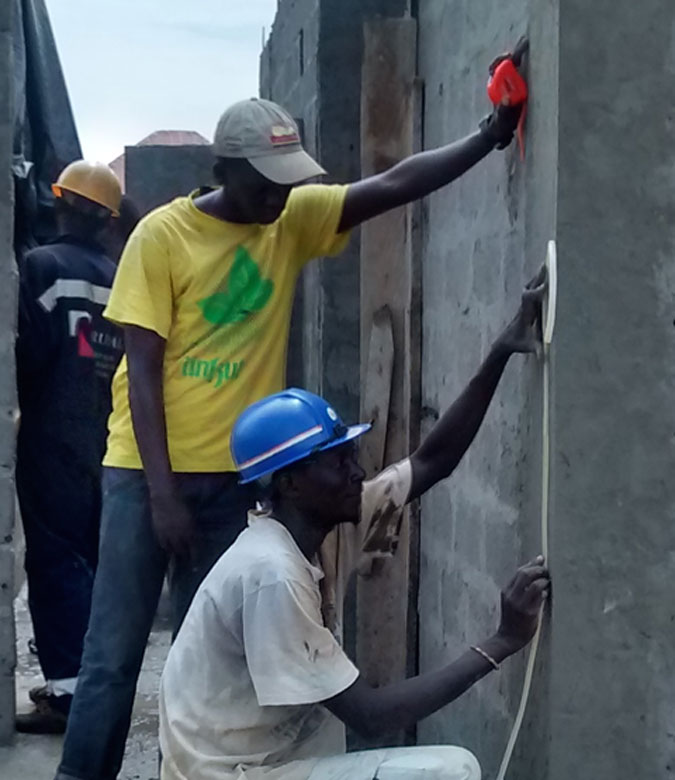 7. Are you worried that if your company grows, as you plan it to, that you will have trouble managing it all, making sure that the quality of your work doesn’t suffer, etc.

Jonathan: Yes, we are worried about that, which is why we are going to do our best to make sure that we have a workplace culture that values honesty and high quality work.  We have to get the right people on board and train them well.  We can’t afford not to do that. 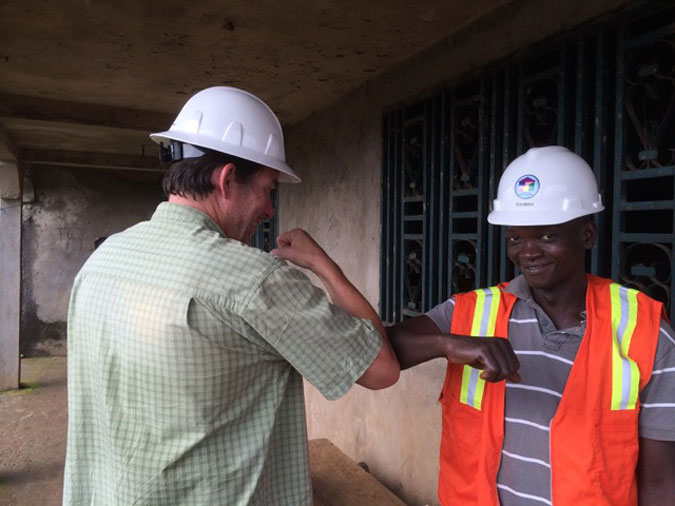 8. Travel is a great way to learn, being able to see different parts of the world and meet people there.  For those of us who haven’t had the opportunity to travel to Francophone West Africa, we may be able to get a taste of that experience in another way.  Are there any particular books or movies that you recommend (in English) for people unfamiliar with the region?

Bob: I’m afraid my fiction reading in that arena hasn’t progressed much since my undergrad literature seminars, but some of the classics (Things Fall Apart by Chinua Acebe, A Bend in the River by V.S. Naipaul, Heart of Darkness by Joseph Conrad) still have some staying power (although Chinua Achebe would not want Heart of Darkness on the list, and in any case the latter two are set in the Congo rather than West Africa).  More recently I read What is the What by Dave Eggers (also not from West Africa, but an interesting look at life in the U.S. through the eyes of a Sudanese immigrant).  Denis Johnson’s The Laughing Monsters, set in Sierra Leone, is on my to-read list, but I haven’t done it yet.

Nonfiction recommended reading would include Africa: A Biography of the Continent (John Reader) as well as Guns, Germs & Steel (Jared Diamond).  The latter is far from Africa-specific, but does provide an interesting take on how societies are set up by geography and climate for certain advantages and disadvantages.  And there was a fascinating piece in The New Yorker last year about the drama behind the re-allocation of the Simandou mine concession in Guinea (although I don’t agree with the author that corruption is so pervasive that it “hits you almost as quickly as the heat” … the current administration’s commitment on that front is making a tangible difference, in my opinion).

As for film, I’ve seen more about diaspora experiences in France (La Haine) and the UK (Dirty Pretty Things) than recent film from the region.   Chocolat (1988), set in Cameroon, made an impression, but that was some time ago.   I’ve not yet managed to make it to FESPACO, the biannual film festival in Burkina Faso, but one could do worse than just work through the winning entries from there over the past few years:  http://en.wikipedia.org/wiki/List_of_FESPACO_award_winners

Mamady:  To add to what Bob provided, the following was written by my uncle, Camara Laye: The Dark Child – this book was written about a boy (himself) from my ethnic group, the Manden (also known as the Mandenka or the Mandingo).   He received a lot of criticism for divulging family and ethnic secrets of the time.  He also wrote The Radiance of the King, Dramouss (A Dream of Africa), and The Guardian of the Word.

Also: History of the N’Ko Alphabet and Its Role In Mande Transnational Identity: Words as Weapons, by Dianne White-Oyler, Professor at Fayetteville State University, North Carolina.

As a longtime promoter of African language education to combat illiteracy in Africa, I recommend the following articles, also:

* US Africa Journal – “In Love All Things Are Possible”: http://www.usafricajournal.com/2013/04/25/in-love-all-things-are-possible/

9. Last, but not least, is there anything you want to pitch, promote, or discuss?

Yes…if people are interested in buying our houses, particularly members of the Guinea diaspora (there are 70,000 Guineans in the U.S. and many more in other countries), or if you have any questions about the work we do, please get in touch, we’d love to hear from you: 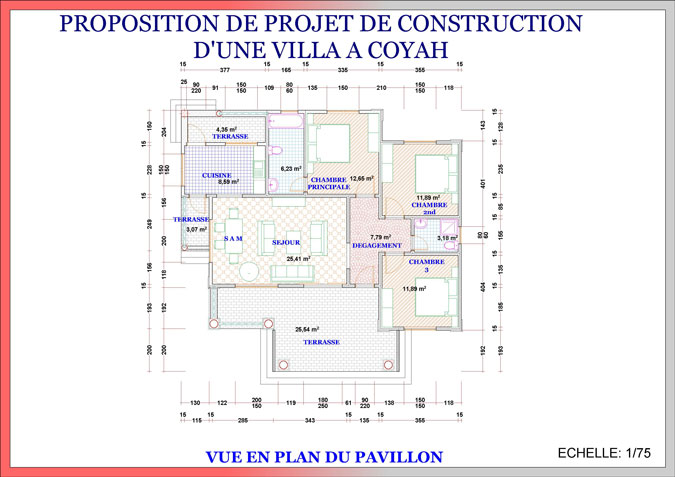