Beth Johnson is someone who absolutely loves her job.  And she is also remarkably fortunate, in that she fell into it by mere happenstance.  While home with her kids, almost three decades ago, and looking to earn some extra money, she answered an ad in the paper seeking someone to do some work from home, and soon found herself employed by Townsend Press, an independent publisher of educational materials.

It was a small, and relatively new company, founded and led by John Langan, who turned out to be a terrific boss, and at first, she did some part time work as a writer putting together materials for vocabulary word study.  (She was actually paid $1 per sentence for coming up with the “using the word in a sentence” examples.)

As time went on, the company, her kids, and her job responsibilities all grew.  Townsend Press had an essay contest for scholarship money, seeking personal pieces about overcoming adversity, and some of those stories, collected, became a book that she put together, Everyday Heroes.  http://www.amazon.com/dp/0944210287/ref=rdr_ext_tmb

Beth now writes and edits a variety of educational books.  Townsend Press has made a concerted effort to reach populations underserved by larger and more traditional educational publishers.

The King School series is a leveled reading series for young readers, showing them a diverse classroom with kids of various races, and has books featuring the same characters in kindergarten, first, and second grades, so that the students can identify with and grow along with the characters.

Their Bluford series for older readers is set in a fictitious inner city high school, and features books focused on minority characters.  They’re immensely popular with students and teachers alike.  (In fact, the teachers have to keep replacing the books, as the kids have been known to walk off with them from time to time.  When you are trying to get kids engaged with reading, this is not at all a bad problem to have.  Fortunately they only cost $2 a piece, so buying them more than once is not an undue burden.)

They also publish abridged versions of classic books: not abridged in the sense of simplified or “dumbed down,” but edited in a such a way that they may reach readers who would otherwise have been put off by unfamiliar vocabulary or dry details of outdated technology.  These changes have been made sensitively and intelligently, making the books more accessible for struggling readers without damaging the integrity of the original stories.

Beth (and some of her fellow employees) regularly visit schools and distribute books and read to the kids in nearby Camden, New Jersey, which is an impoverished city with a very high crime rate.  It is, perhaps, her favorite part of this job which she loves.

We met up in Philadelphia and had a lovely talk over a leisurely lunch.  She’s a fabulous conversationalist, a talented writer, and a complete animal nut (current count is one cat, three Australian shepherds).  Townsend Press is lucky to have her.  And I’m lucky to know her.

The NewsWhistle Q&A with Beth Johnson 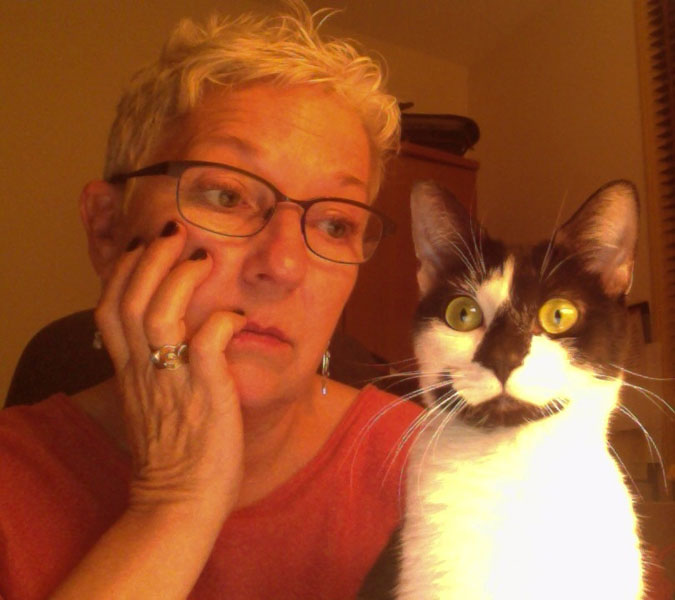 The saddest thing was on Sunday: my husband and I went to the Korean spa, got massages, went out to dinner, and just had a great time.  But when I got home, I felt a sense of gloom just descending upon me.  There seemed to be no reason that I was so sad.  I didn’t realize until I dreamed about her that night, that it had been the anniversary of my beloved sister’s death.

I wish I’d taken more chances.  My children amaze me…they do these things like go live in China, go teach in Chad, go move to LA and try and make a living in the entertainment industry.

A man walks into a talent agency hoping to make a splash with his talking dog.  The agent’s a bit skeptical but agrees to hear him out.

“Who’s the greatest ballplayer of all time?  RUTH!

At this point, the agent had had quite enough of this, and threw them out of his office.  As they left, despondent, Rover asked his master, “Do you think I should have said DiMaggio?”

I skipped second grade.  My math skills have never recovered.

My daughter spent one of her college trimesters in Senegal, at age 20.  In the three months she spent there, having studied French, which is Senegal’s official language, she found herself living in a family compound where the primary spoken language was Wolof, which she didn’t know at all.  I kept thinking how frustrated and confused she must be, but when she came back she was upbeat and positive about her experience.  She explained that when she was feeling low, she would remind herself that she had the rest of her life not to be in Senegal.  She was only going to be there for a short time and needed to make the most of it while she was there.  I try to be more like that.

I don’t even want to say it out loud.  But don’t comment about how nothing bad has happened…it is temping fate.

10. It’s great that Townsend Press is doing so much work to create books for readers who may have been overlooked in the past: older kids who struggle with reading, minority kids who get to see people who look like them in books and don’t have to think that reading is for other people.  Are there books now that don’t exist but should?  Is there some other niche that needs filling in educational publishing?

We get asked all the time about books featuring kids in immigrant populations: Somali kids in the US, Hmong kids, etc.  That’s something that hasn’t really been done…if anyone out there wants to have a go at it.  It would probably never make a lot of money, but it’s a need that’s out there.

Yes, Townsend Press.  If you have a kid who doesn’t like to read, please check out our work, especially the Townsend Library books: http://www.townsendpress.com/