Sparked by Tarana Burke in 2006, the “Me Too” movement has gained urgent national and global recognition for the problem of sexual abuse and rape against women. In the art world, attention is also being paid. A new exhibition curated by Monika Fabijanska, The Un-Heroic Act: Representations of Rape in Contemporary Women’s Art in the U.S., recently opened at John Jay College of Criminal Justice’s Anya and Andrew Shiva Gallery, and presents the works of twenty female artists.

The exhibition’s title, The Un-Heroic Act, references and inverts a chapter title, “The Myth of the Heroic Rapist,” from Susan Brownmiller’s landmark 1975 volume Against Our Will: Men, Women and Rape.

In her book, Brownmiller quotes from the famous thirteenth-century warlord Genghis Khan, who defined rape in heroic terms as “women as warrior’s booty, taken like their proud horses.” But while Brownmiller explores a “direct connection between manhood, achievement, conquest and rape,” (p. 290), tracing its evolution through mythology, history, literature, and culture, Fabijanska’s selection of works seeks to demonstrate the “un-heroic” reality of rape by focusing “on the lasting psychological devastation of the victim.”

The gallery, located on the ground floor of John Jay College, faces Eleventh Avenue.  Once inside the building, you pass along a corridor to the main exhibition hall where floor-to-ceiling windows provide those inside with a view of the street, and conversely, display to the street the show’s title in large bold letters stenciled on the near wall.  The effect of that alone is dramatic, even before you reach the main exhibition hall, where you encounter two works, each portraying a scene of rape in a classical mode, though cunningly subverted.

Susanna and the Elders, Restored with x-ray, 1998/2018, by Katherine Gilje, originally part of a diptych, takes off on Susanna and the Elders, painted in 1610 by Artemisia Gentileschi, but Gilje’s pentimento is a visual metaphor presenting Gentileschi as Susanna, and revealing her terror as she is accosted by the elders. The violent motion of Susanna/Gentileschi’s head gives the work a stroboscopic effect, and shows the initially mute and defenseless Susanna transformed into a screaming Susanna struggling furiously against physical violation. 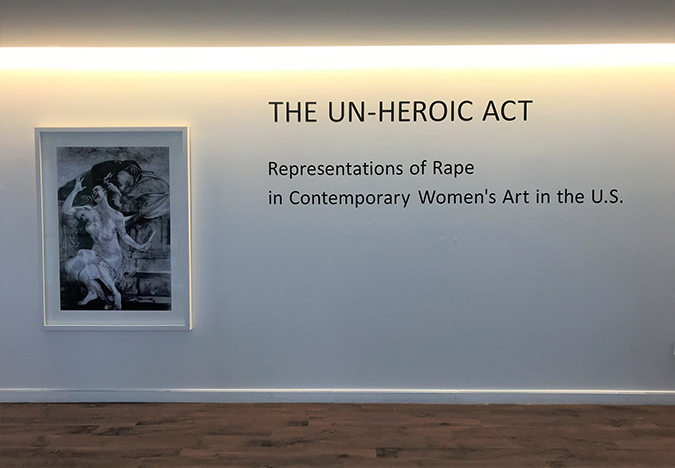 Tangentially linked by theme to this work is Sabine Woman, 1991, Carolee Thea’s installation, situated five feet away, yet adjacent to Gilje’s painting, and a play on The Rape of the Sabine Women, reinvented as a recreation of the 1998 Central Park Jogger rape incident.

Depicting five men raping a woman, the figures, crafted from chicken wire, are hauntingly spotlit by overhead lights that cast an eerie reflective sheen over the grisly scene. The installation has a looped tape recording of the artist reading “fragments of news reports” of rape incidents, seeming to emanate from behind curtains as she speaks in a low, slightly inaudible tone. You need to stand in perfect quiet in order to grasp what she is trying to say.

I found this voice-over effective, a kind of projected consciousness reciting accounts of sexual violation. And both Gilje’s painting and Thea’s installation provide substantive historical context as an exercise in power, laying the groundwork for the rest of the exhibition.

The main gallery, thirty feet wide with nine-foot high ceilings, affords a sizable space for one to move through, and permits views of each work from whatever distance or closeness is needed to fully absorb each work’s impact. The left side of the room, divided into five well-lit separate exhibit areas, nicely contrasts with the gallery’s right-side wall, where the works hang spotlit by overhead lighting.

According to the show’s brochure, the assembled sculptures, photographs, fabric installations, text-based wall panels, films, paintings, and drawings are grouped into subject categories under different headings and indeed, the proximity of Gilje’s painting and Thea’s installation, under the heading The History of Art, works perfectly.

However, the Guerilla Girls Broadband poster and Ana Mendieta’s five “performance documentation” photographs constituting RAPE SCENE, though categorized under College Rape Culture, are situated oddly at opposite ends of the gallery. And this sort of inconsistent placement happens frequently enough throughout the show to confuse and distract anyone seeking to explore how the exhibited works thematically interact.

A sculpture displayed atop a pedestal, Guarded Secrets, 2015, created by Sonya Kelliher-Combs, stands alone by the entrance. The forms, based on “Iñupiaq walrus tusk trim designs,” consist of a number of semi-translucent phalluses of varying lengths. Made from sheep’s rawhide and punctured by porcupine quills, posed in a random manner, some of these are closed at both ends, some opened at one end, and with quills protruding on all sides of each piece, ready to pierce the skin of any stray hand. Peering into the open end of one of the penis sculptures I spied an interior maze, consistent with the idea of a hidden, inaccessible and unknowable secret, while the forms most clearly portrayed penile rape as a crude and quite un-mysterious and grisly form of torture. 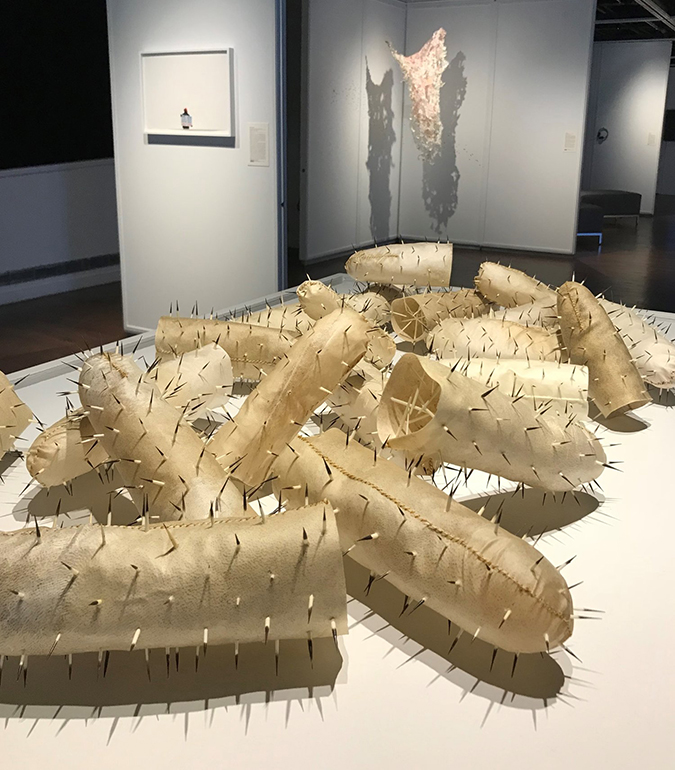 In a small walled-off screening room the film, First Person Plural, by Lynn Hershman Leeson, deals with secrets: “things she was told not to speak about as a child.” One eavesdrops through headphones to the artist’s reveals of what she had previously kept hidden, as the film montages images that suggest the Holocaust, physically abused children, and other signifiers of atrocity and helplessness

A second film, “RAPE”, by Yoko Ono, seems not to be about rape per se but rather how physical harassment and constant attention can illicit and heighten a person’s sense of fear and paranoia.

Categorized under Gender and Abuse of Power the film shows a woman flattered by the attentions of a camera-wielding man, but as the lens follows her (to the point where she falls down from intimidation and the invasive threat of physical violence that such constant attention can suggest) the theme of intrusive attention morphs into a metaphor for rape.

A third film, And Nothing Happened, by Naima Ramos-Chapman forms, to my mind, a triptych with the work of two other artists: Suzanne Lacy and Ana Mendieta. Just adjacent to the screening room, Lacy’s monumental wall piece, Three Weeks in May, displayed on the rear, facing wall, is a rape map charted from “confidential rape reports” which Lacy obtained from the Los Angeles Police Department, with crime scene locations stamped with the word “RAPE.” One is struck by the irony of this piece appearing on one side of a wall, while on the other side of the same wall, in a viewing room, one is about to watch Chapman’s film on the aftermath of a rape. 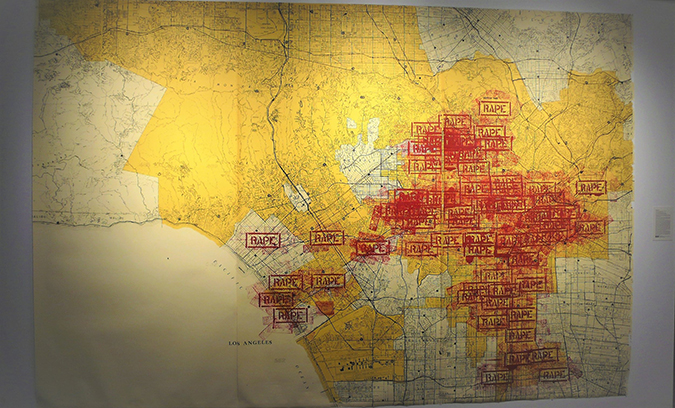 Exiting the screening room, I went to look at Ana Mendieta’s work, Rape Scene, a series of installation photographs. Created when she was a student at the University of Iowa, Mendieta’s “performance documentation” was in response to the brutal and highly publicized rape and killing of a nursing student, Sara Ann Otten, by another student in March 1973. Mendieta replicated the rape with herself posed as the victim, and her much-repeated comment about this work,“I can’t see being theoretical about an issue like that,” has the power of a mantra. The curator considers Mendieta’s Rape Scene to be a pinnacle of rape imagining and the undoing of “classical art depictions of rape,” but by comparing Gilje and Thea’s works with Mendieta’s images in her press release commentary, she unwittingly defuses the power of some of her own choices for this show. 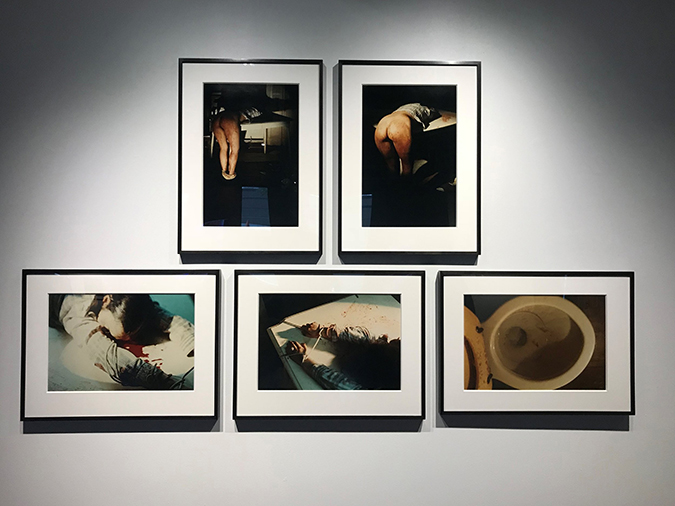 There is absolutely nothing “theoretical” about Mendieta’s work, which stands alone and apart in its power, and seeking to connect her photographs to other works only underscores the others’ academically reductive perspectives—none of which possess the authenticity of Mendieta’s.   Also, Mendieta’s work is curatorially paired with Jenny Holzer’s series of color images, Untitled (Selections from Lustmord), and though these two works create a forceful locus about rape and physical abuse, to be fair, Holzer’s work requires extensive textual exegis to be understood. This weakens its immediacy and power.

The fourteen images of tattooed sayings on bare skin are so cryptic as to verge on meaninglessness. I could not fathom, say, how a slogan such as “I try to excite myself so I stay crazy,” inscribed on skin, is illustrative of the show’s “un-heroic” theme. And while Holzer’s images are categorized under Rape in Wartime, the title term Lustmord, reference for Lust-Killing, is a specific form of sex crime from a very particular historical period, the Weimar Republic.

A series of particularly brutal civilian sex killings, Lustmord nearly always occurred between lovers, was a phenomenon entirely endemic to Weimar, and did not arise en masse in the context of or during other wartimes. In fact, the German and French surrealists fancifully embraced Lustmord as a comical subject for painting. There is even a Freida Kahlo depiction of a Lustmord-like murder in Mexico which she found amusing.

Thus, Holzer’s use of Lustmord to characterize the mass rape and genocidal slaughter of Muslim woman in the ethnic cleansing that occurred during the Bosnian war from 1992 to 1995 feels not only inaccurate but wrong. The murder of Muslims by Serbs and Croatians were not private lover murders but genocidal acts by soldiers whose goal was to annihilate anyone Muslim. Simply put, the linkage makes no sense, at least to me. 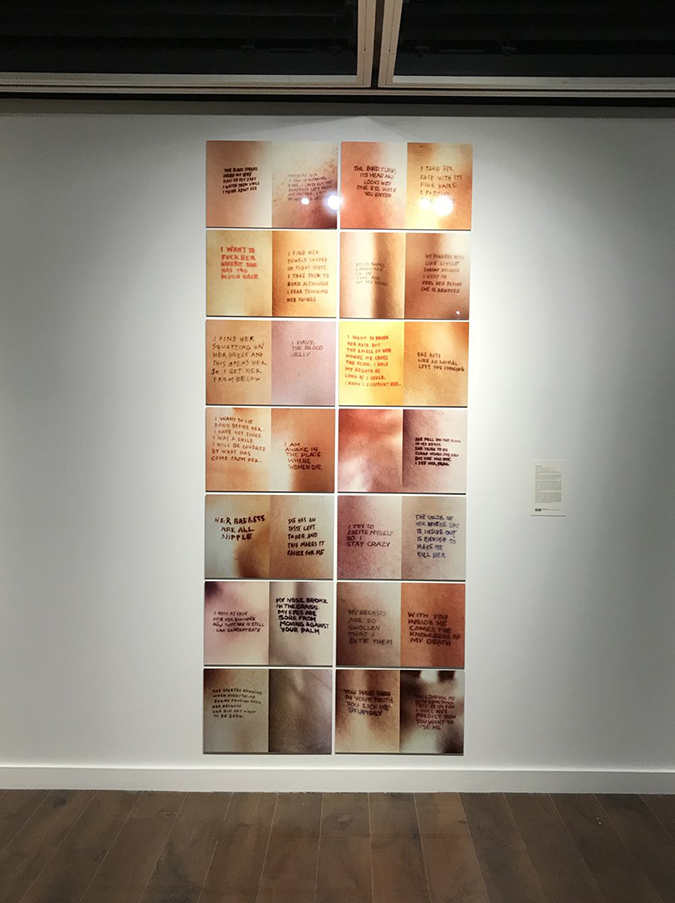 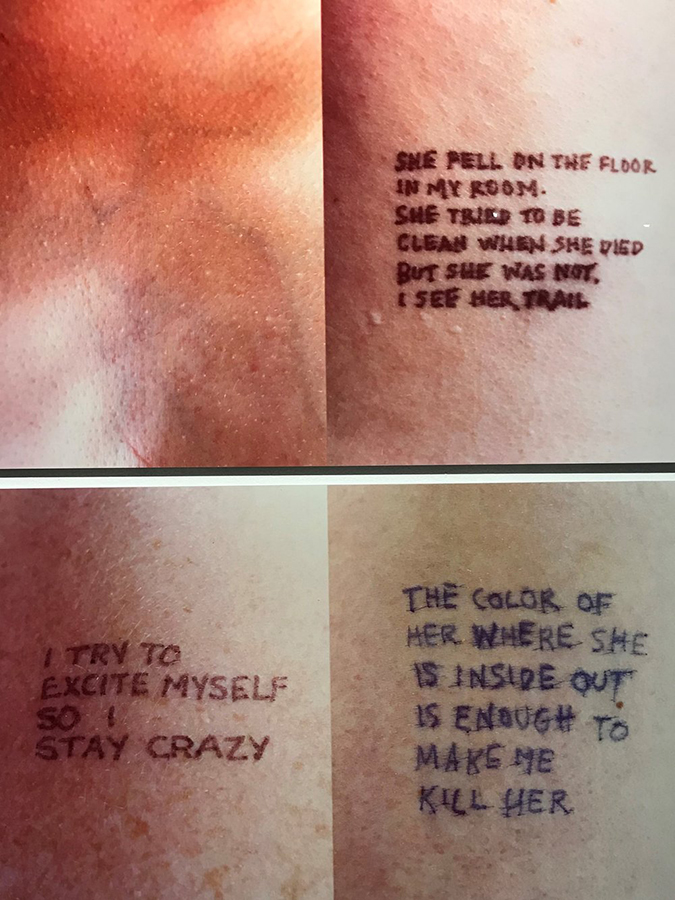 Kara Walker’s career is built on the depictions of the themes, Rape, Slavery and Race, and her drawing is the last word in this exhibition, hung at the end of the gallery’s last wall. A large graphic drawing of the rape of “a twelve-year old girl,” it explicitly presents and personalizes in the face and posture of its victim the atrocity of rape as few or none of the other works in this exhibition succeed in doing.

Not even her accompanying hand-written account has the force of this picture. Yet, in the context of the exhibition as a whole, this drawing is a visual anomaly because it both represents Brownmiller’s use of the phrase, “heroic rape,” as a soldier’s prize, while successfully illustrating “the unheroic act” in the face of its victim, and the sense of dread and shame that hangs over the entire drawing.

This drawing presents both sides of the act, without offering us a choice of means for interpretation. Both act and aftermath coexist. If anything, it seems to linger in some limbo shadow space between the historical crime and stag magazine pornography, which adds another layer of meaning to this exhibition itself.

While looking at and studying these works on and about rape, I was impressed by how Fabijianska’s curation showed the complexities that arise when art and atrocity meet against the urgent backdrop of current events. Broadly conceived and explanatory in its narrative design, the show promises to repay and reward repeat visits. 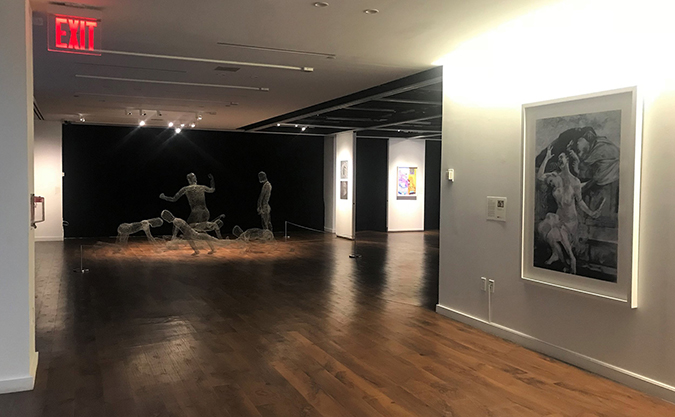