Lists of must-see films for any self-respecting fan almost always include Casablanca and
Citizen Kane, and deservedly so. But there are so many other worthy pictures which are
often overlooked. So, from film-fan to film-fan, here’s a recommendation from our must-see list. 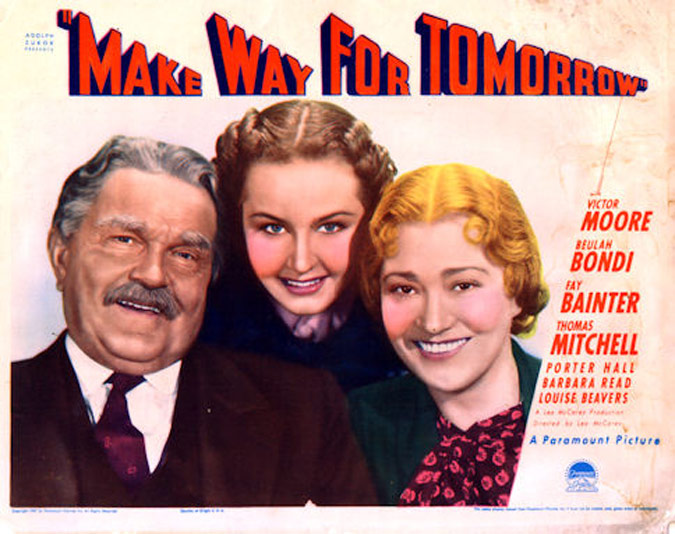 Lucy and Barkley Cooper (Bondi and Moore) are an adorable and doting couple who are no longer able to take care of things as they once were.

Due to financial troubles, they lose the family home.

Their five adult children – George (Thomas Mitchell), Nellie (Minna Gombell), Cora (Elisabeth Risdon), Robert (Ray Meyer) and Addie (unseen) – must then decide who should bear the responsibility of caring for their parents.

Each of the offspring has a family of his/her own – all of whom regard Mom and Dad’s presence as a nuisance. None of the children are able to take both parents, not immediately anyway.

So for the first time in fifty years, the Coopers are parted, each going off to live with a different child until one of them, Nellie, can take both parents in three months’ time.

However, neither Nellie nor her husband, who has let her know in no uncertain terms that her parents would not be welcome, are exactly thrilled by this prospect.

Mr. and Mrs. Cooper often receive more compassion from perfect strangers than they do from family. There is a particularly lovely scene in a hotel where the couple spends a few hours together. This is the same hotel where they spent their honeymoon so many years before. The hotel staff and musicians fuss over Coopers, treating them exactly like you would want someone to treat your own parents.

The film also touches on the issue of ageism in employment. Barkley mentions returning to work several times, even applies for a job. But he is rejected; his years of experience do not seem to matter. Bitter, with moments of tenderness, this film is just devastating.

Some of you may be able to get through this film without crying; for everyone else, we politely suggest a couple of boxes of tissues.