Mathilda Chua is an actor-writer who hails from Singapore and lives in New York.

Mathilda, who’s repped by the Carson-Adler Agency, recently reached out to us and asked if we’d like to interview her or get her take on acting.

Her e-mail was well-timed. We were looking for a Style story – and Mathilda came across as funny and determined.

So, after reading her amusing e-mail, looking over her bio, and watching a couple of very funny scenes in her clip reel, we thought we’d give Mathilda the opportunity to respond to our Seven Creative Questions.

We’re glad we did. Below is a interview that’s humorous, sincere and informative. We hope it leads to more successes for Mathilda. Enjoy! 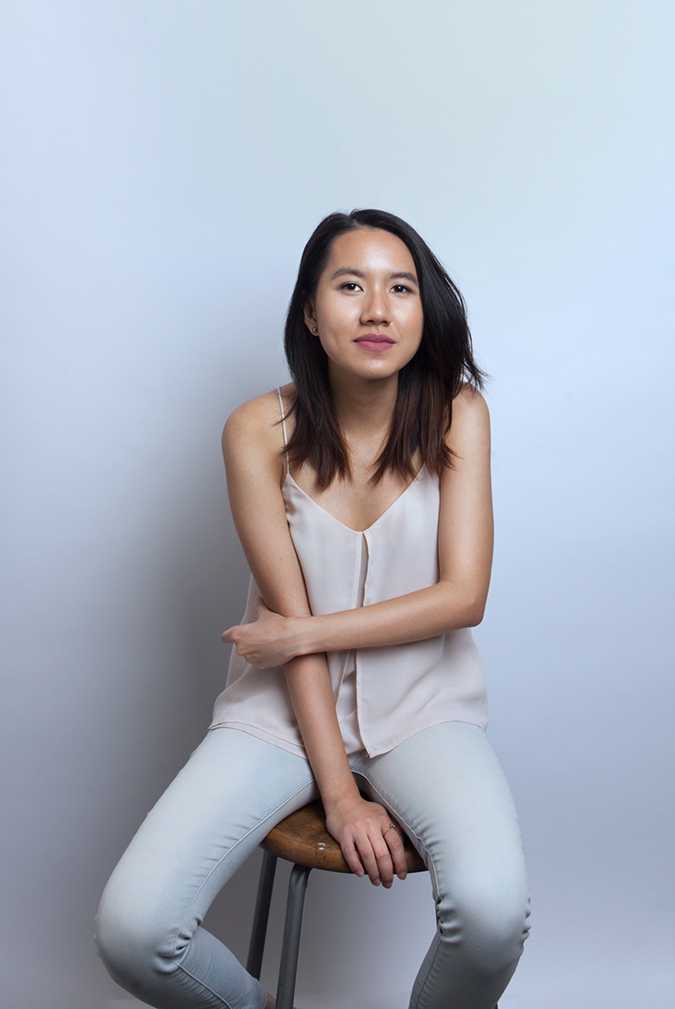 TELL US A LITTLE ABOUT YOURSELF: I was born and grew up in Singapore, I moved to New York when I was 19 to attend NYU’s Tisch School of the Arts, where I studied at both the Stella Adler Studio of Acting and at the Stonestreet Screen Acting Studio. I currently live in New York City where I work as an actor and writer. I’ve written and performed in my own work at the Midtown International Theatre Festival and the Writers-In-Performance Summit held at BMCC. And also appeared in various MFA thesis films and commercials (Conde Nast). Later this year my writing will be seen on a teenage web-series titled SociCircle about a group of PoC girls who deal with issues surrounding growing up and identity.

PLEASE DESCRIBE YOUR PERSONAL STYLE: Casual and edgy with a hint of fandom (my Pokemon and Jurassic Park T-shirts speak for themselves).

1. How long have you been a professional actor? And what is your first memory of acting or performing?

Professionally I would say about two years? I only started getting real gigs about my third year of college. My first memory of performing would actually be when I was four, I was a tree in kindergarten, but I was so over it I actually wandered offstage into the audience at one point to find my family.

Oh, that’s like having to pick your favorite child, there’s so much good art being made now, it’s crazy. I’ll narrow it down to a few, Kumail Nanjiani was so good in The Big Sick, that movie did not get the recognition it deserved! Jennifer Lawrence in Silver Linings Playbook, Daniel Kaluuya in Get Out, Timothee Chalamet in Call Me By Your Name. So, so good. Onstage, Lupita N’yongo in Eclipsed, Alan Cumming in Cabaret, the revival Roundabout did in 2014 was insane, and right now, Andrew Garfield and Denise Gough  in Angels in America, they’re both just pure magic and such wonderful actors, the fact that they made an 8-hour play go by so quickly is a feat in itself.

Worst performance? I know how much effort and dedication goes into every production so I don’t like to downplay other artist’s efforts, but one thing that I will never be cool with would be white-washing any PoC [people of color] role. That’s the worst.

3. What’s the best piece of business or acting advice you’ve heard? And do you follow it?

“Work without expectation.” One of the best acting teachers I’ve had in my life told me that and that’s something that I carry with me all the time. Just to focus on the work at hand and your craft. Everything else will fall into place after.

Ooh, that’s tough. Woodbury Common, the strip outlet malls in upstate New York. Everything is already at a sale price, but if you go during sale season, oof. You’ll get such good bargains on really high-end goods. And it’s only an hour outside of the city!

5. What music, movie, book, or magazine gets you ready for a big performance?

I like to create a playlist for every character that I play, and I’ll listen to that before I go onstage/on set to help me set the tone. 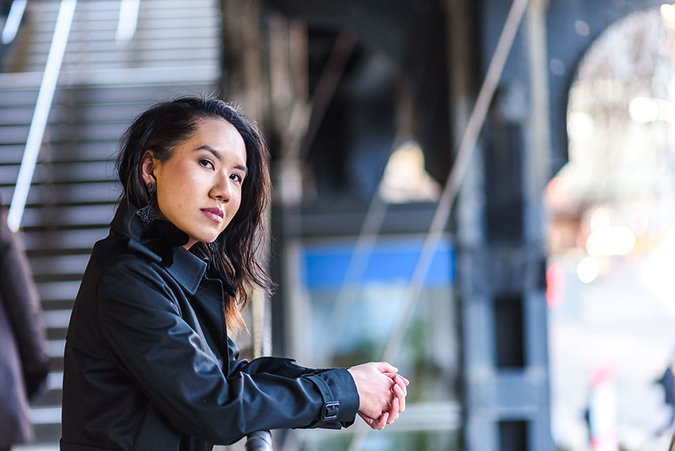 I’m not gonna lie, the industry is very very tough. For a woman, for a person of color. But at the end of the day, almost all of us in this business, love what we do. And that’s the reason we do it. Making your passion your profession is a privilege and I’m really lucky that I get to do that, despite the many many challenges along the way. At the end of the day, when you get to create work, work that’s important to you and to other people, that really makes it worth it.

7. If you can have one photographer shoot your portrait, who would that be and why?

Annie Leibovitz. All her portrait shots are gorgeous, she’s so good at capturing someone’s innate qualities along with their vulnerability which makes for such a great photo. I’m obsessed with the shots she did for Vogue’s 125th anniversary.

8. How hard is it to be an actress in New York? What’s an average day like for you?

It is really tough, but there are so many others who are on the same path as you, trying to find their way, so that’s really comforting. And I went to school here so I’ve got a great group of friends who are actors as well and we support each other, I’m very grateful for them. There are certain challenges being an immigrant actor of color, not as many opportunities are available to us, but at the end of the day, you just have to keep trying, keep doing, and sometimes those are the qualities that stand out to people and make you unique as a person and artist.

On an average day, I’ll get up and go to my day job, which I absolutely love (shoutout to my Broadway Licensing fam!), so I’m very lucky in that aspect. Then I attend auditions, some days they’ll be packed back-to-back, or if I’m involved in a project I’ll be at rehearsal/at a shoot. I usually make it a point to unwind and see a show/a film to keep in touch with good work being put out there.

9. How different is New York from Singapore?

It is really different, but also very similar in a lot of ways. Singapore is very much a city, very urban, like New York. People in Singapore come from everywhere else too, we have very a multi-racial makeup. Food’s definitely a lot cheaper in Singapore though! And we basically have one long reason, it’s just summer all year long, it gets so hot.

10. What are your favorite bars, restaurants and sightseeing locations in New York?

Bars – I love Verlaine on the LES, it’s this little Southeast Asian bar that makes the best lychee martinis and they have happy hour until 10 pm. Juniper in Herald Square makes great cocktails. Marie’s Crisis is so fun, it’s this Broadway karaoke bar and everyone just sings showtunes all the time, it’s great.

Restaurants – Laut and Rasa are great for Singaporean food. Tre on Ludlow street, is the best place for unlimited mimosas for brunch. Tony’s in Times Square is the best for Italian, and Meikuitei near midtown is great for Japanese!

Sightseeing – Ooh, I actually love just walking around Central Park or chilling in Washington Square Park, that’s the New York kid in me speaking. I love the Bronx Zoo, Coney Island is always a blast and I always love seeing shows, so even though Times Square is you know, Times Square, I’ve had so many fond memories there of seeing amazing work. 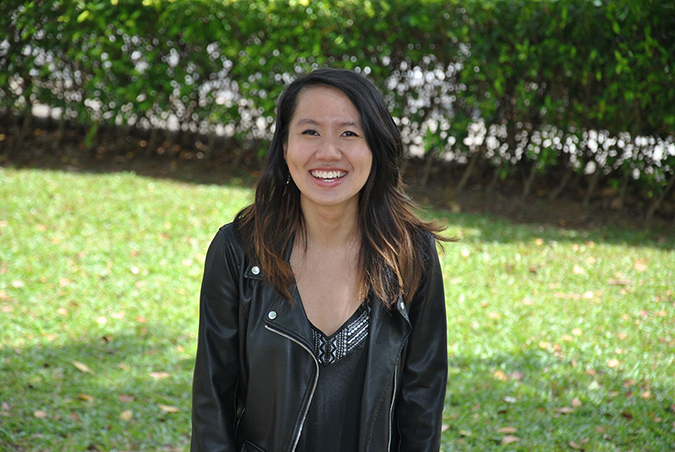 11. What are your recommendations for a person who only has 24 hours in Singapore?

Wow, is it sad that I literally have a whole itinerary planned in case anyone ever asked me this question? Firstly if you land at Changi Airport, good for you, it’s great we literally have the best airport in the world. For breakfast, go grab kaya toast at Ya Kun (there are outlets in the airport itself, amazing), that’s such a signature Singaporean breakfast. Then head out of the airport, go for a walk in the Botanic Gardens, we just got declared a UNESCO Heritage site, it’s gorgeous. You can see our national flowers there, there are orchid gardens. It’s beautiful. For lunch, grab chicken rice, it’s our national dish and every visitor needs to try it. In the afternoon go to the National Museum, it gives a lot of great insight into Singapore’s history. Then explore all our cultural neighborhoods, i.e., Chinatown, Little India, etc. End the day with a walk along the Singapore River, it’s got a great view of the skyline, you can see many of our national landmarks (i.e., the Esplanade, the Merlion, etc.) and you can relax at one of the bars.

12. Our readers like world culture. Can you suggest any music or movies from Singapore?

The Apprentice, it’s a film by Boo Jun Feng, it’s such a good film about family and obligations and reflects a lot of Singapore culture. I Not Stupid by Jack Neo is a classic. Music-wise, Inch Chua is really good and Nathan Hartono is such a cutie.

We thank the following photographers for use of their images: