This week Gloria is thinking about Mr Mojo Risin.

The transportation strikes are over which is good because now people will have it an easier way to get to the other strikes and disruptions that are currently going on throughout Paris.

I was serious when I said that striking is the number one national sport here.

Did you know that ages ago a group of stockbrokers wanted the local bakeries to create a new pastry that would go with their morning coffee?

The reason? They didn’t like eating croissants because of the crumbs that got all over their business suits.

Supposedly, this is how the “Financier” — a mini buttery almond cake delight that is served with coffee — was created.

Like a croissant-less banker, I was truly in great spirits when I was finally able to ride the metro– everything seemed like it was back to normal.

My excitement wore off after a couple of days because I got pickpocketed at one subway station.

As soon as I went through the turnstile my phone was gone.

I was carrying luggage up the stairs so they had complete access to my coat pockets but still, I didn’t feel a thing and don’t recall being that close to anyone or a massive crowd.

I mean, this is a talent.  One minute you’re running to the train. Ten minutes later you are on a train platform with a sad “I’ve been mugged face.”

It’s the same look when you have eaten something that tastes like it has been expired for a year. Kind of like a banker with a croissant.

Once I was able to get a hold of a new phone, I called my friend Mark in London to organize his visit to Paris.

He told me I should go have a drink at La Mazet, one of his favorite bars. It’s also famous for being the last bar Jim Morrison went to before his death on July 3rd, 1971.

At the time Le Mazet was a French bistro, not really a bar, but of course, they served alcohol and they served Jim Morrison his last Croque Monsieur, so they say.  They also do not serve Croque Monsieur or any other food (except potato chips).  Just to know.

Le Mazet aka the Mazet is now a proper English pub. Jim Morrison loved Paris. He was awestruck by the city’s beauty and how important artistry was to the French. He felt it was a human place where he could reinvent, perhaps refresh, his artistic ideas and thoughts.

After all, he was a true poet who loved Oscar Wilde, who is also buried in Père Lachaise, the same cemetery as Jim.

It is often hard to accept that with all this beauty in Paris it can also be a very dark place for some, especially hypersensitive souls that often come to Paris to search and observe.

Paris is a place that makes you stop and smell the roses, but question every thorn.

My friend, Mark Edmonds, a journalist for the Sunday Times who has interviewed many of the greats in the music industry, reminded me that Morrison’s last days in Paris are riveting.

Jim Morrison was much more of a crooner than he was a singer.  Jim regarded Frank Sinatra as his greatest influence. Mark told me to listen to “Love Street” and “Touch Me” by the Doors.  I agree it could Frank singing.

I stepped inside Le Mazet just as it opened and the first thing that caught my eye was a picture of Jim Morrison on the right side of the bar. 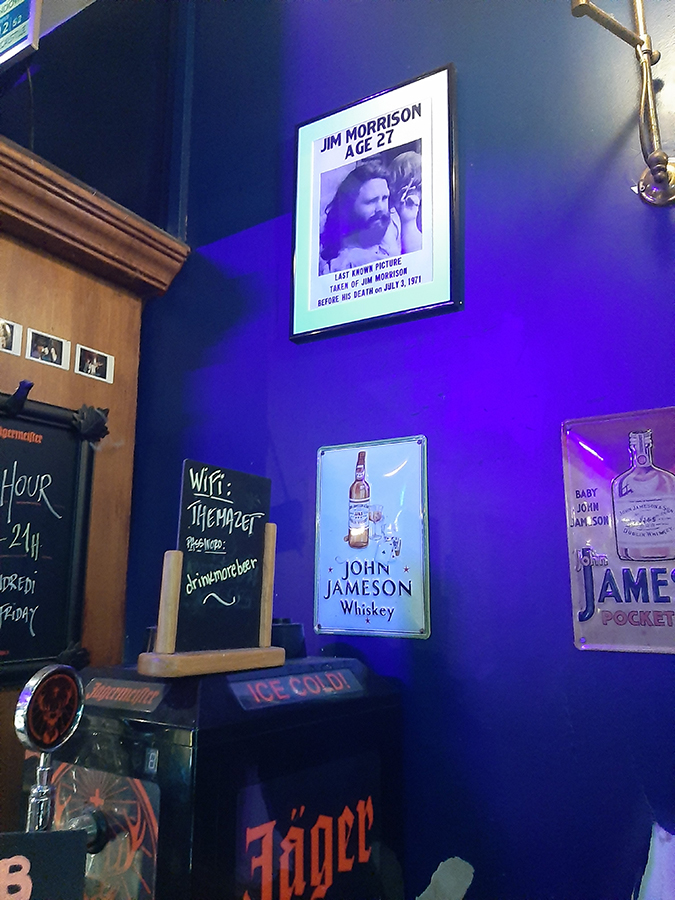 My friend and I found a corner spot and ordered two pints of London Lager. Superb. They also have Brexit Ale. Just to know.

The music was “lit” as the young kids say. The bar’s playlist included the Who, Velvet Underground, Santana, and the Smiths.

As I sat there with my very knowledgeable music friend on a grey rainy day, we  tried to imagine how Jim Morrison got to Le Mazet from his apartment. Jim lived at 17 Rue Beautrellis in the Marais.  Did he walk?  Was there a transportation strike that day?

I’d like to think that Jim did walk that day and crossed the Seine and maybe stopped at the Fontaine Saint-Michel,  smoked a cigarette, and was awestruck like I was an hour earlier.

Lucky for him, no one stole his phone. 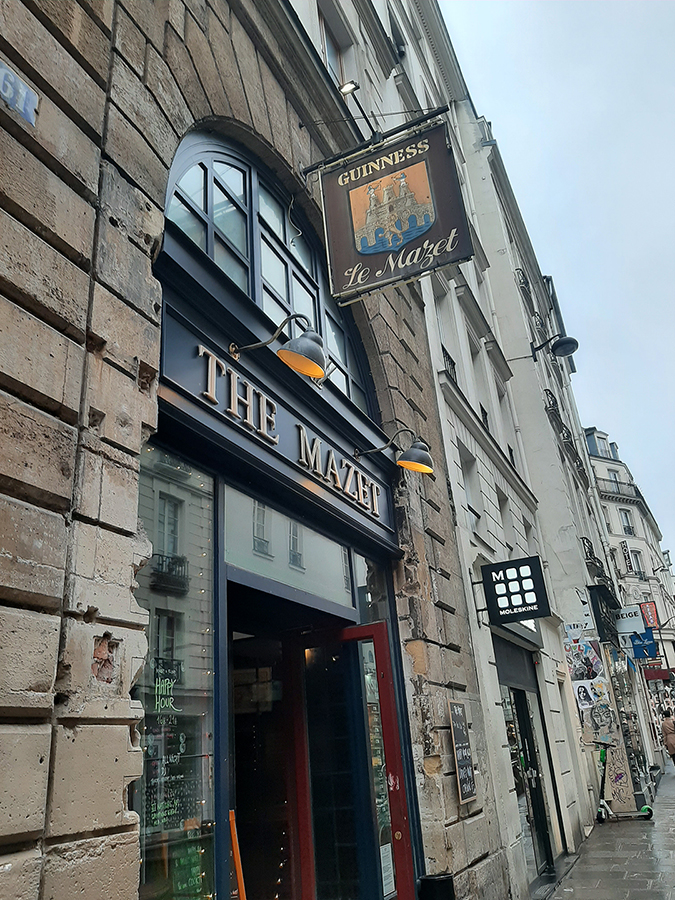 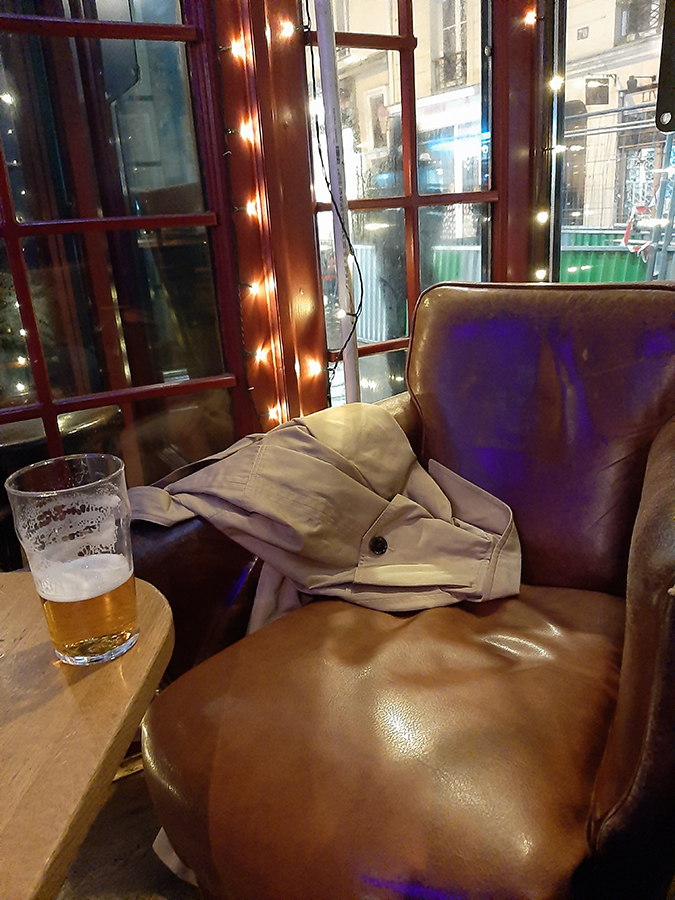