Story: Doom Eternal is set sometime after the 2016 game, Doom. Hell’s horde of demons is consuming earth. Your mission, Doomguy, is to hack and slash your path of absolute carnage and fury to end the hellfire. You exterminate areas on earth and alien planet alike on your quest to stop the Makyrs— aliens who seek to benefit from their prophesized apocalypse— from perpetuating the end of Earth.

The entire game is surprisingly filled with tons of lore. You can collect manuscripts on each level that fill you in on certain characters, events, and places, and their respective backstories. The entire prophecy and “Hand of God” mythos surrounding the Doomslayer/Doomguy is almost beyond a Homeric epic; after I read through most of these manuscripts, I felt like a biblically-justified agent of destruction. 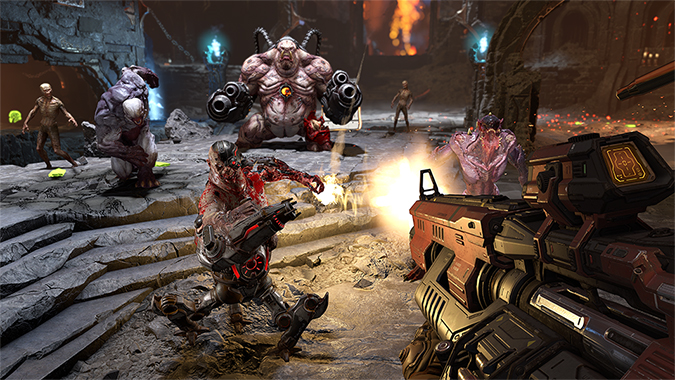 Gameplay: From the get-go, Bethesda pulled me all in. I could not play the game lying down or relaxed. The fast-paced hack n’ slash First-Person Shooting is only the beginning of your complete immersion/conversion into the Doomslayer; the constant movement is what really roped me in. Depending on the difficulty, if you want to survive, you have to keep moving as you’re murdering monsters. And the more hard-fought my victory, the more I felt my reflexes were rewarded with a feeling of apocalyptic self-accomplishment. 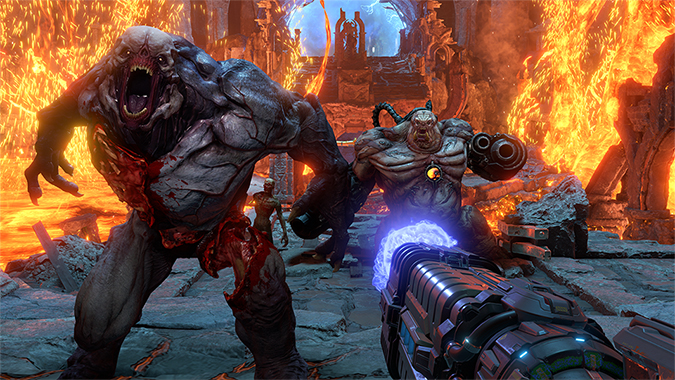 Soundtrack and Graphics: The blend of realistic biblical and futuristic visuals makes the game visually interesting to explore: you’ll find yourself on planets that are temples; battle demons with laser swords; and hack your way through enough guts and gore that you’ll be as desensitized to it as a retired war surgeon.

The Doom Eternal soundtrack is comprised of solely heavy metal. But the heaviest metal, like osmium. Raging electric guitar licks of fury and the low pangs of barbarian war drums egg you on to rip and tear your way through each level. I found myself headbanging so hard I gave myself shaken baby syndrome.

Final Thoughts: I personally felt the main story was a bit short and the mechanics for some of the easier battles got to be a little too routine. That being said, Doom Eternal is still definitely worth the pickup. For a good 20 hours, I felt like the righteous hand of God, doling out holy destruction. Totally worth the $60 USD on the PSN Store, Steam, or Xbox Games Store.

If blow means good, then yes.