Hello and welcome to another NewsWhistle game review. We’ve got an overdue review for Persona 5 Royal, released on PS4 March 31st.

This game is a rerelease of Persona 5 with some major additions and changes. Those will be mentioned/acknowledged; however, for those of you unfamiliar, I will review the game in totality.

You play as Joker — a codename given to you later in the game, though you actually name him yourself — a transfer student to Shujin Academy. You transferred to the new school because you got into some unjust legal trouble when you tried to stop an assault. Weird dreams and occurrences spiral until you and your friends at Shujin Academy become The Phantom Thieves of Hearts. You sneak into Palaces (representations of powerful adults’ distorted cognitions) in order to steal their treasure (the embodiment of their distorted desire.) There’s a lot of terminology; and honestly, I suggest you read some Jung or Campbell because The Collective Unconscious and Archetypes are brought up repeatedly. However, the intensely detailed narrative adds to the immersion into the present-day fantasy world of Persona 5 Royal. You — Joker — have to juggle your student life with your subjectivity hero-thief life as the lines blur and black and white becomes gray.

Persona 5 Royal is a turn-based RPG and a life-simulator. For those of you tired of the turn-based four-party system, hear me out; the game makes leaps and bounds in innovative and enjoyable combat: attacks can be stacked on top of each other for stat increases/extra turns, you can negotiate with the enemy for items/money/experience points in holdups (even catch them and add them to your roster of Personas too. Think Pokémon.), and there’s guns. Why’re you still reading this review? Go play the game already! A turn-based RPG with guns?!

The life-simulator half of Persona 5 Royal is the more overwhelming half. Story progresses in terms of days and you only have so much time and so many days. You juggle your student life at Shujin Academy, social life with your friends, and even a part-time job at a coffee shop. Maximize your time and don’t ignore the life-sim side of Persona 5 Royal; it has more of an impact on the story and combat than you think. My only complaint is the pacing; life-sim and narrative can be a little overwhelming at times because there’s so much thrown at you at once. 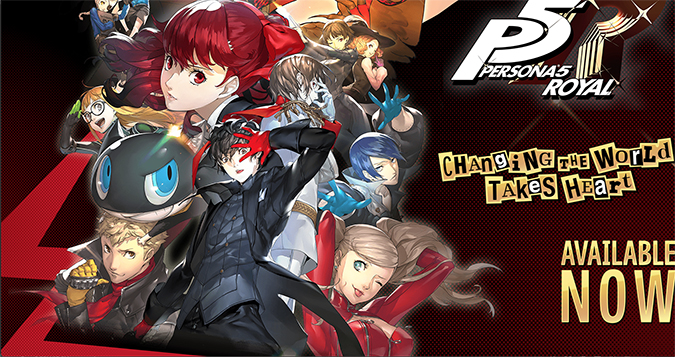 Persona 5 Royal is stylized in a manga/anime art style. However, the game keeps an old style new with consistent cuts between 3-D and 2-D art. Some cutscenes and graphics will look straight out of an anime/manga.

Persona 5 Royal’s soundtrack is all in the genre of acid jazz. If you’re not sold on what may be the sickest genre name of all time, acid jazz is a blend of jazz, disco, and funk; this keeps the game modern and exciting.

Originally, I was going to leave a 4.5/5 review for Persona 5 Royal because the life-simulator can be overwhelming at times. But, I can’t do it; it’s totally worth it. Persona 5 Royal has blown my mind and changed “the game” as to what a turn-based RPG can be and do.

Will it blow you mind?

Better. It will blow your whistle.

Our rating (with five being the best): 5 out of 5 whistles.