As I promised back on April 28th that it was “Sick of Sarah week,” it is appropriate that I start off with another lie… As an Artistic Statement, I am formatting the answers the individual members gave my inquiries as responses from the whole band. No matter who did the actual talking, the full band is given credit. This is an Artistic Statement, as previously mentioned, meant to reinforce the impression that the band is a tightly-knit unit working as one.

The truth is, I am a rank amateur. I immediately realized when I started playing back the recording of my interview with Abisha Uhl, Jessica Forsythe, Alexa Wolf, Katie Murphy, and Jessie Farmer, that without FBI-grade A/V equipment it would be damn-near impossible to discern who was saying what in the course of my half hour with the band.

Cut me some slack. I was in the green room at the Turf Club with five band members (and one mother!), and we were all shooting the shit. I hope that my lie at least feels artistic…

CW: Everyone introduce themselves, please. Say what you play, what you do.

SOS (Sick of Sarah): Hi, my name is Abisha, and I am the singer. I sing. I’m Jessica Forsythe. I… am a drummer. Alexa Wolfe, and I play bass. My name is Katie Murphy, and I play guitar. My name is Jessie Farmer, and I also play guitar & backup dance. 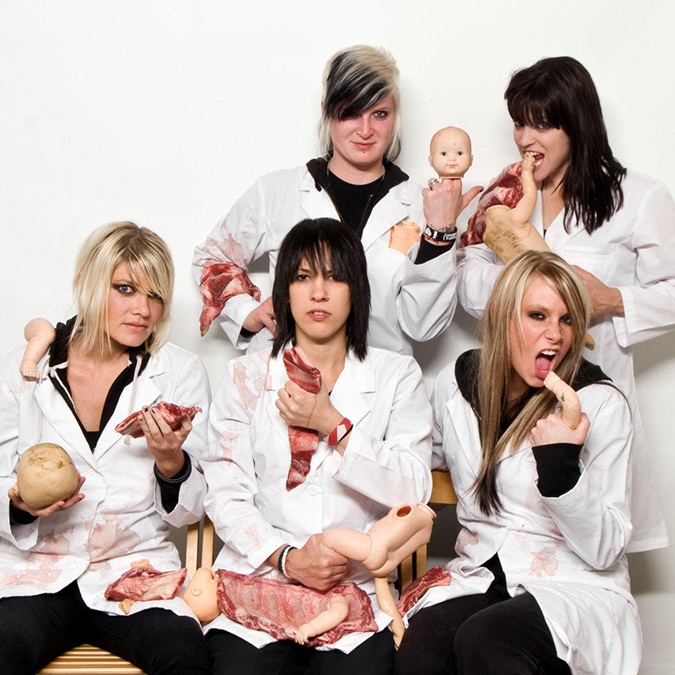 Celeste: I am Celeste, and I am Katie’s mother, and I am here to make sure they behave themselves.

CW: Awesome! I have just a couple of questions, jump in whenever you like…

CW: No problem, you guys are amazing.

SOS: Your favorite song is “Giving Up.”

CW: It’s moody, I love it. It’s the sound of a struggle, and you don’t even remember what you are fighting about..?

SOS: [Abisha] Yeah, I mean, you should review all the songs, and just tell me what they are about.

CW: I don’t know who writes what. Can you talk about songwriting duties?

SOS: [Abisha] I do the lyrics and the melodies, and the girls do everything else.

SOS: It’s a collaborative effort. [Abisha] If I write a stupid lyric, they’ll correct me. 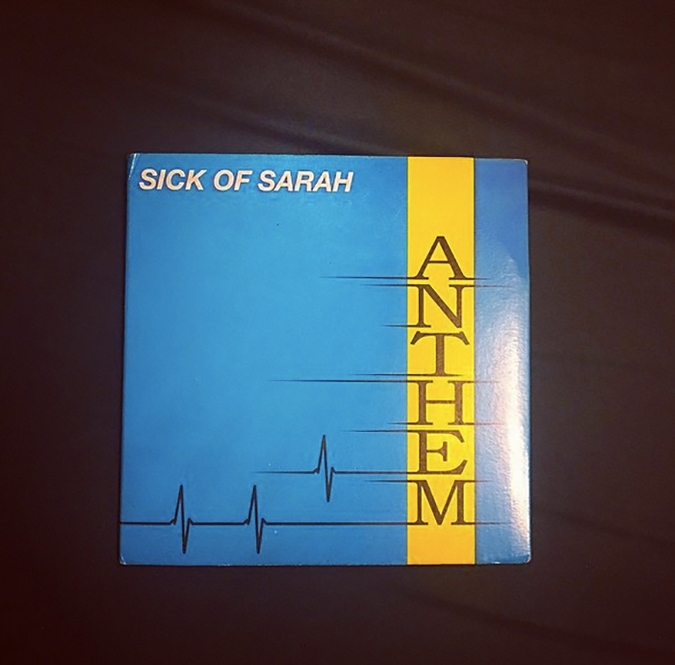 CW:   Can you describe the sound of [upcoming June 30th release] Anthem?

SOS: Rock and roll. I feel like the difference between 2205 and Anthem… the six songs on Anthem are from a cluster of about 30, and we wanted to showcase the growth of the band; musically, and maturity-wise.

CW: [in a terrible, terrible DJ voice] HOW ROOOCKIN’ IS IT?!

SOS: It’s definitely more rockin’. This record is the first record where we broke from our label, our manager. We had a new producer, and engineer. We had a lot more say in the sound. We have a lot better idea of how we wanted this record to sound. We put a lot more effort into making it sound like something we would listen to.

SOS: Yeah, we were in control. [Anthem] didn’t have any outside influence telling us what we should or shouldn’t do. We took the steering wheel. We want to be us.

CW: Physical albums, downloads… Where is one going to be able to get the upcoming Anthem?

SOS: Google Play, iTunes, Amazon, Spotify… We’re learning, as we are doing this for the first time. We are signed up with Tunecore. The release is June 30th for downloading, and you can buy the physical copies here at the shows. We printed a thousand CD’s for the shows. The single, “Rooftops” was released on April 6th.

You can download “Rooftops” on iTunes, or listen to it for free on Spotify, but you should probably just buy it because we’re broke.

Obviously, it’s better for us if you buy directly from our website because we run our own merch store.

CW: Although it’s impossible to not do it, I try to shy away from describing bands in terms of what other bands they sound like… I hear this in this song, that in that other song…

SOS: [Jessie] For me, I really like how rhythmic Metric is… We can all agree on that, actually.

CW: I got a little in the weeds in the review [of 2205] when I started talking about Siouxsie and the Banshees and Reckoning-era REM…

SOS: That was cool, though. That’s dope. I love REM. Hell yes!

CW: It’s a testament to what you are doing when you can pull small and large references of other musicians out of your songs. Even Judas Priest. 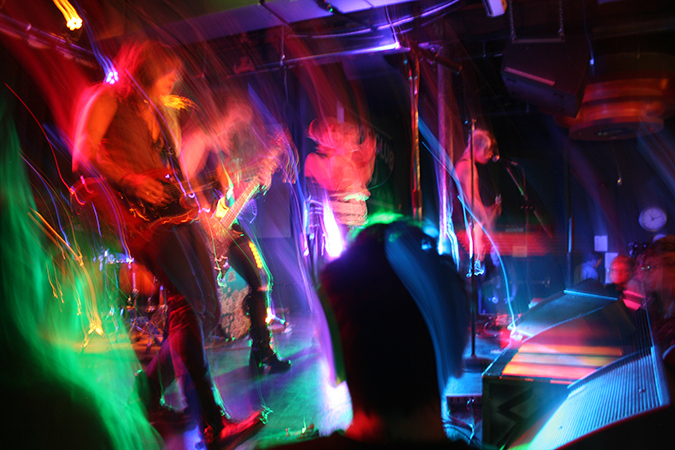 CW: How is the tour going?

SOS: It’s going really well. I’m really tired. It’s been a long time since we had a headlining tour, and you know what? I’d say we’re doing pretty damn good.

CW: Place your bets on you guys, then?

SOS: May the odds be forever in your favor!

SOS: [Alexa] As the new girl, I am excited to see how engaged the fan base really is. No matter what is going on before the show, once the show starts everyone is right up front. The room magically fills up at the last minute, and that is really fucking cool. 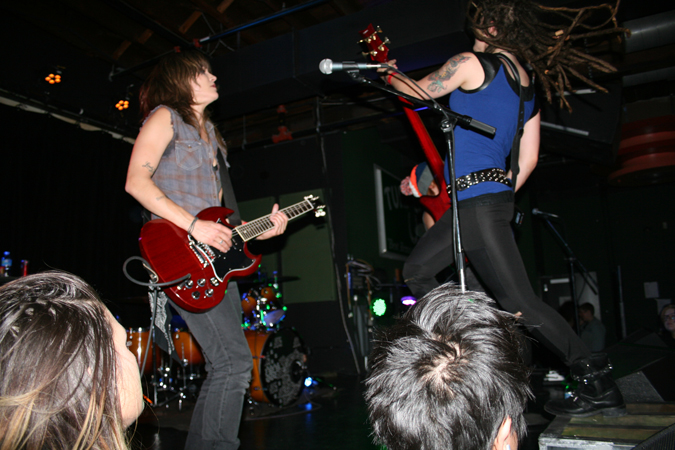 CW: You seem to have a really good relationship with your fans. Do you want to talk about that?

SOS: A lot of them do become friends. It does happen. Somehow, someway our music or one of us has helped them through something, and they carry that… It’s just a really loving… It’s unlike any other relationship I have encountered.

SOS: [Katie] *ahem* I have had to spend two of my birthdays in [name redacted to protect the people of Toledo, Ohio], and you shouldn’t even have to spend your unbirthday there. I’m sorry.

CW: I’ve never been there. I’ve been to Columbus…

SOS: That’s pretty good. Columbus was a great show for us. Surprisingly enough, I didn’t realize we had so many people willing to come out on a Monday or Tuesday night… whatever it was… to see us. It was a great show. It depends on the venue, really. You can’t really blame the city. But sometimes is depends on the crowd. If they’re standing there, and you get done playing, and nobody does or says anything. Tumbleweed goes by…

After people say, “oh my god, that was great!”

“We thought you were on Quaaludes!”

This tour, it has been really good. Our fans are great. They’re bringing us candy, they’re following us around cities, paying for our hotels. They stuck around after we beat 2205 in the ground, and it’s amazing to see.

CW: Going back to 2205 for moment, it is an address-related title. Is it the address of a practice space…

SOS: Yes. Except for Alexa, everyone has lived there. And we all have the 2205 tattoos. We would practice in the basement. It was the epicenter of the band for many years. A lot of barbeques. The video for “Giving Up” was shot there. That’s 2205.

CW: Saw this on your website, “real bands save fans, real fans save bands.” Tell me about that.

SOS: Author unknown. Someone posted that on our wall. After our last tour, I think our fans knew there was a lot going on with us at the time. Different people were thinking of not being here. [Former bassist] Jamie had to quit, and that was out there. That stuff just feels good. We couldn’t do it without them, and that expression rejuvenated all of us at the time; remembering why we do what we do.

SOS: [Jessica] Oh yeah. Rock in Prevention is a non-profit that I have worked in off and on for about 8 and a half years. It’s a music-based program that is really cool. We did a music video… The program teaches about anti-bullying, character education, drug prevention all through music, and that the key part that I really love, and the girls really love, too. Everyone has been really supportive. Anything we can do to help get the word out about the program is a good thing.

CW: It’s really cool that you are involved with things like that, and I think your relationship with your fans demonstrates this sort of humanity and togetherness.

SOS: We’re actually getting ready to get involved in another anti-bullying program… Torn Labels Project. Stay tuned for it.

CW: I don’t have any more formal questions, so if you want to say anything in closing jump on it.

SOS: Jugs not drugs. I had a fan who made me a “jugs not drugs” tee shirt, and she was wearing one too, and it was the cutest thing. 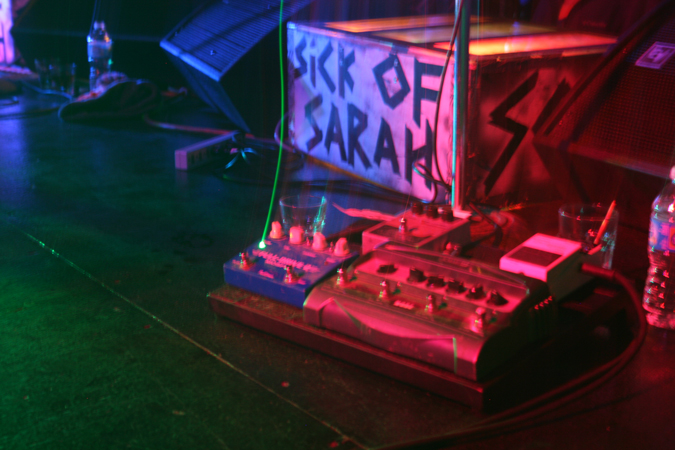 Shortly after my conversation with the band, I was treated to a face full of rock and roll courtesy of SOS. The show was two weeks ago at the wonderfully-refurbished Turf Club in St. Paul, MN, and the echoes are still ringing in my ears and brain.

First off, when the band talked about having a special relationship with their fans, they weren’t kidding. The crowd was up front, and digging every moment. 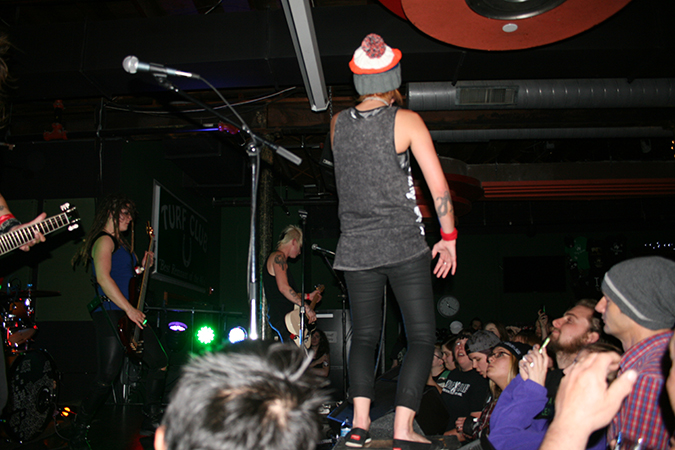 Abisha was fighting her own voice throughout the show (she won), Alexa bopped around wearing her bass Joan Jett low, Jessica punished her drums, Jessie gave the crowd the low down on Anthem, and Katie was in constant motion.

Everything sounded amazing, better live and in front of a crowd, and although they didn’t play my favorite song, “Giving Up,” [sad face] I may have a new favorite in “Bar Full of Strangers” (to be released on Anthem June 30th). I hadn’t heard it before, and the band murdered it. They were in lockstep union; getting their point across. 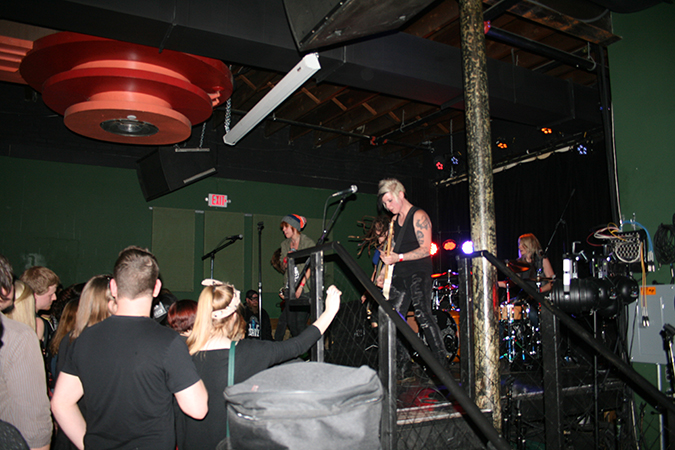 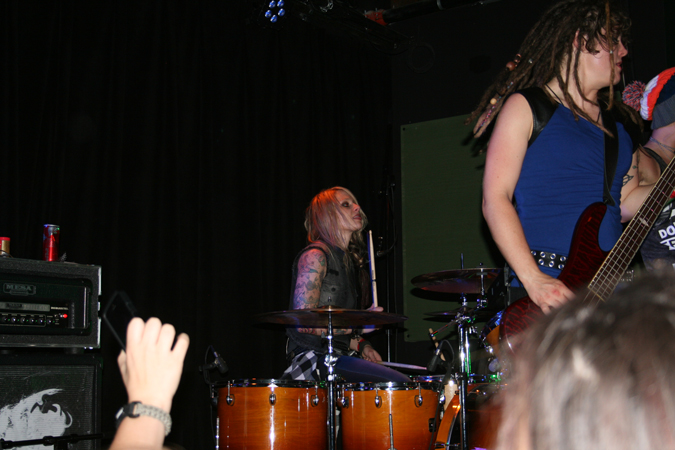 They played a good chunk of 2205 and Anthem. “El Paso Blue” and “Autograph” were a couple more big highlights.

They teased N’Sync covers, jokingly admonished the crowd to “keep it down,” and had us out of there before bar time so that it would be “easier to get up for your paper route.” They did and said all of these things, but mostly SOS just rocked the asses off of people who seemed to be waiting all week for it to happen. If you didn’t leave happy, you don’t know how to have fun, and/or have terrible taste in music.