Currently, an exhibition titled GLENN O’BRIEN: CENTER STAGE is open at the OFF-PARADISE PROJECT SPACE in lower Manhattan. The exhibition is curated by Natacha Polaert, and according to the press release, it is not a memorial exhibition but a show meant to “evoke” O’Brien, his artistic milieu, and his artistic and literary tastes. All of the works were created between 1976 to 2019. There are 17 works in the exhibition but only two of the pieces are from O’Brien’s personal collection; the others were created during his lifetime or after he died.

The space is approximately twelve hundred square feet with fifteen-foot high ceilings. Sets of two or three windows are located at opposite ends of the loft, providing a lot of natural light; combined with overhead track lighting, each work is well lit. Stepping off the elevator, I entered into an alcove and saw two paintings hanging on a brick wall about six feet across from the elevator.   The first painting I noticed hanging to my left was titled T.V. Party, 1988, painted by Martin Wong. 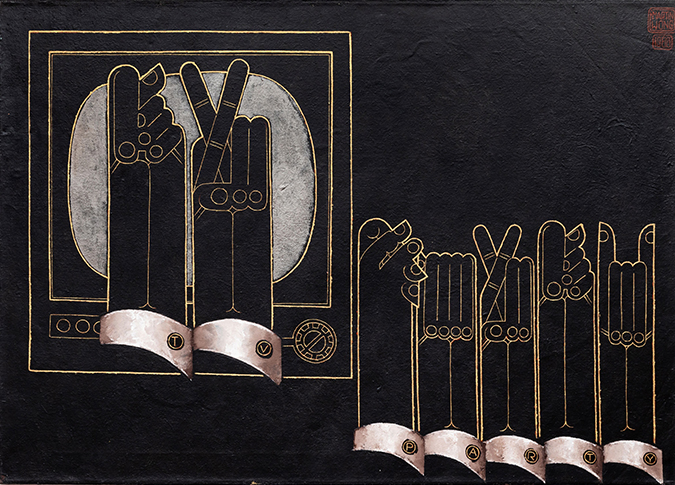 This painting consists of seven anonymous hands, extended vertically across the canvas. A pair of hands covers the front of a small-screen television set, while five more hands line up on the right-side of the television. The fingers on each hand form different configurations of a sign language, signally to the viewer in a kind of hip language; the wrist of each hand is covered by a formal, white-shirt cuff held in place by a black cufflink. This picture sets the exhibition’s tone by acting as an invitation to a hipster’s party. Hanging to the right of Wong’s painting is a painting by Sara Cwynar, Girl from Contact Sheet, 2013, featuring a kind of televised image of a young girl, distorted the way test patterns on old television sets would sometimes alter the picture. 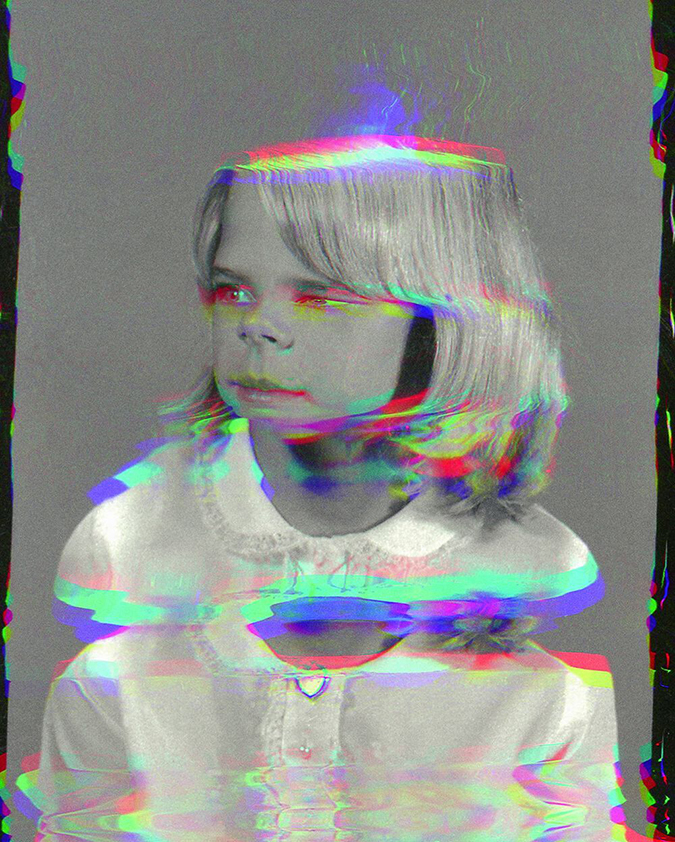 To the right of these two paintings and sitting on a four-foot high pedestal, there is a small television monitor showing a color videotape. This video is by Les Levine, titled Diamond Mind, 1977. The title refers to a classic Buddhist text, The Diamond Sutra. The film shows two men speaking. One of them is Les Levine and he is informing his employer, he is leaving his job as an industrial designer, “moving on.” His employer is puzzled by his explanation for leaving but wishes him well, “I hope you know what you’re doing.” As they speak, images of Levine’s industrial jewelry designs appear and disappear on the screen. The film is an unscripted performance, a discourse between two people “figuring out where they are in their lives.” It has a subtle power in a metaphorical sense because you are in someone’s mind, or as Levine mentioned to me, “it isn’t clear whose mind it is, leaving you to decide, or not.” As they speak, it reminded me of times I have spoken to myself, imaging things in my own life, out loud. 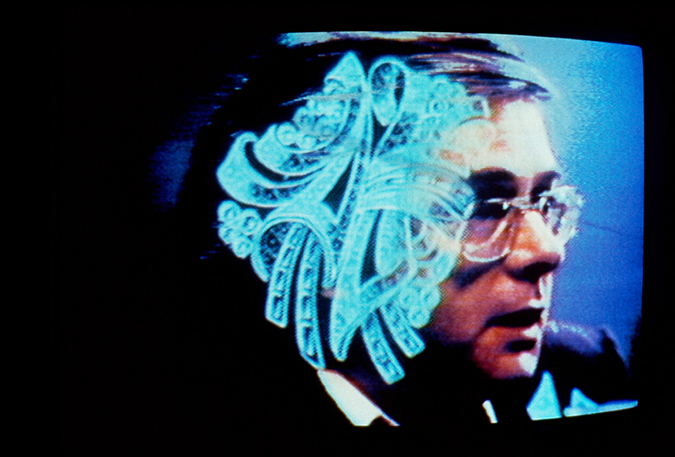 I walked into the main room for the project space where a number of works hang on the left-side wall. Each work is well-spaced and visually accessible. The first work, A Search for Clues, is Dennis Oppenheim, 1976, created for an “Ad campaign” poster from an exhibition at the M.L. D’Arc Gallery. It was a gallery that exhibited Levine and Oppenheim’s work at the time. The poster is a triptych, showing a young girl, (the artist’s daughter) holding a marionette or “surrogate of the artist,” in her arms as a large kitchen knife protrudes from the puppet’s chest. I suspect it was provocative in 1976, and it is still provocative today. Both Levine’s film and Oppenheim’s ad reference O’Brien’s career in advertising, but more importantly, they are still provocative, as O’Brien’s advertisements and writing were.

Dennis Oppenheim, A Search For Clues, 1976. Courtesy Off Paradise.

O’Brien was primarily a writer and a strong aspect of this exhibition attempts to evoke his use of language, which may account for the artworks with words in them. Walter Robinson’s painting, Marlboros, showing three packs of Marlboros, references the kind of cigarettes O’Brien smoked as a young writer. But it also references a well-known brand product.

The poet Eileen Myles, has created a print of a poem “inspired by a conversation she had with O’Brien.” The artist considers it to be “an inventory of the moment.” Her work, A Poem, has an intimate sensibility and like Les Levine’s film, it give you a view of someone’s mind in a particular moment. Near to Myles’s work is a single print by Sarah Charlesworth from her series Nouns, 2003, employing the front page of a newspaper with all the words except the nouns removed. In her scrambled collection of nouns, the artist has created a concrete poem. Richard Prince’s work is a joke painting, 2014; according to a printed handout, Prince and O’Brien enjoyed sharing jokes from the routines found in “Borscht Belt” comedy routines.

The largest artwork in this exhibition is titled Bookshelves (A Portrait From Afar), 2019, by Claude Rutault. This work is essentially a photo-mural comprising the left-sided wall of the room, two hundred fifty-five inches high by one hundred six inches long, a recreation of a wall in O’Brien’s library. In a printed handout the artist wrote he never met O’Brien. But, Rutault considers himself “a writer” because he sets down a set of instructions on how his work is to be painted, and“for this show, all the paintings and photographs on glenn o’brien’s bookshelves that are not portraits of glenn will be covered by a canvas repainted the same color as the wall on which the bookshelves are hung.” The artist calls this “a portrait by subtraction. . . . glenn o’brien was a writer, my work starts with writing, I write painting.” 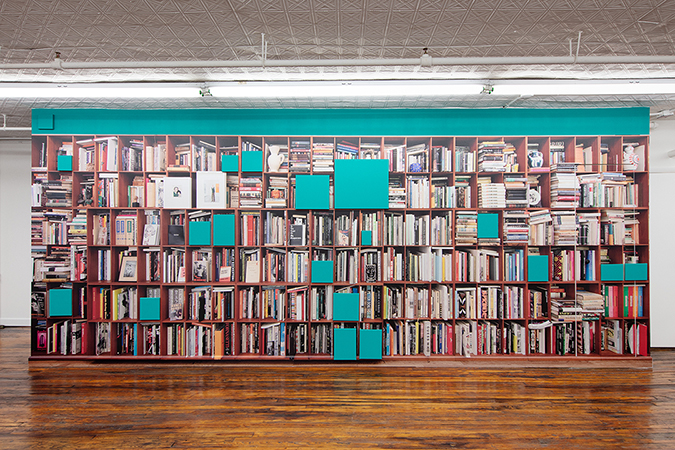 Bookshelves (A Portrait From Afar), 2019, by Claude Rutault.  Installation Photograph by Guillaume Ziccarelli. Courtesy Off Paradise.

I did not feel this large work to be as intimate as A Poem by Eileen Myles, but it certainly evokes O’Brien’s range of reading and part of the fun of scanning these shelves is picking out obscure, pulp paperback titles, suggesting O’Brien never truly abandoned his Beat sensibility regardless of how sophisticated he portrayed himself in his writing. For someone with such a large book collection, I was surprised there were no piles of books painted on the space’s floor.

There are smaller works in this exhibition which I sensed evoke O’Brien’s sense of fun, including a group of various-sized rocks painted as M&M’s, 2014, created by Dan Colen, sitting randomly sit on the floor in a far-left corner of the room. They are pure pop. Tom Sachs’ work Skateboard Wheels, 2008, is displayed on a four-foot high pedestal in the gallery, suggestive of O’Brien’s energetic ability to work on different projects. 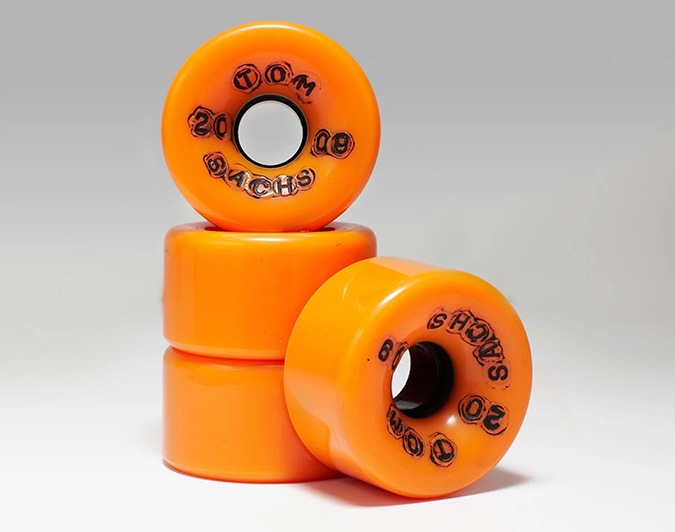 I was puzzled by the absence of Jean-Michel Basquiat’s work from this show, not even a small picture. He and O’Brien were friends and Basquiat made his first public appearance on T.V. Party.  Nevertheless, Ms. Polaert’s efforts to assemble a multi-faceted “reflection” of O’Brien’s life and personality succeed and will pay off for anyone who visits this show.

To learn more about O’Brien’s life and achievements, click here.