Since Saturday, September 27th, hundreds of thousands of protestors have taken to the streets of Hong Kong calling for free elections and political reform.

And while the protests are mostly peaceful, there have been dozens of injuries and arrests, as well as a widely-reported tear gas incident in the most occupied district, Admiralty, a section of Hong Kong that houses local government headquarters, business offices and shopping centers.

In Admiralty (where most media images, including ours, originate) one major thoroughfare is still cordoned off, affecting local merchants and road traffic.

Due to business losses, demonstrator demands, school closures,  past scuffles and police action, the standoff can appear tense at times.

If you’re visiting Hong Kong, or interested in the daily developments, here’s what you need to know about the protest, now dubbed the Umbrella Revolution. 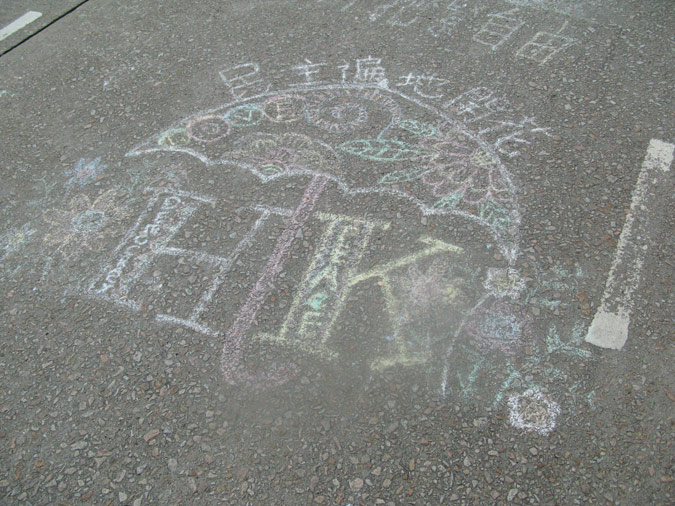 In short, the “Umbrella Revolution” refers to Hong Kong’s mass protest against proposed controversial measures for the election of the city’s Chief Executive in 2017.

At the beginning of the demonstration, protestors were seen using umbrellas to defend themselves against advancing police who tried to disperse the crowd and restore order with the use of tear gas and pepper spray.

But the group didn’t waver, and demanded not only the revocation of the 2017 proposals but also the resignation of the current Chief Executive.  The media has since described the mass movement as the “Umbrella Revolution”.

2. And for those looking for a more detailed account?

It all started with a decision of the Chinese Standing Committee of the National People’s Congress, a high-powered body which can interpret the Chinese constitution, and the Hong Kong Basic Law that is made under it.

On 31 August 2014, the Standing Committee resolved that the next Chief Executive of Hong Kong would be elected by “universal suffrage,” giving power to each person’s vote.  But there was a catch.  Candidates must receive a majority support from a 1,200-member “nomination committee”, and that only up to three candidates should be allowed to come forward to contest for the top post.

Many people were infuriated at the decision.  Pan-democrats and social activists derided the scheme as undemocratic and a fake election as it deprive people’s rights to be elected. They believe that the nomination committee would only allow pro-Beijing candidates to run for the election of the Chief Executive, and leave no real choice for the people of Hong Kong.

Some pan-democrat activists declared to initiate a long-planned and rehearsed mass campaign, dubbed the “Occupy Central” on 1 October and demanded the government to retract the political reform scheme.

University students were the first to react with a college-wide class boycott on 22 September 2014.  Secondary school students followed suit on 26 September 2014.  Some 1,500 students, discounting their parents and citizens who support their cause, flocked for a mass assembly around the narrow strip of pedestrian pavement outside the newly erected iron fence of the Government HQ off Admiralty — the fenced-off area, known as the “Civic Square” to the public, uses to be a free public open space where people from all walks of life are free to air their oration from their soap boxes.

In the early hours of 27 September, some students began to climb over a two-meter iron fence to “reclaim” the Civic Square and were met by police, who’s response  enraged the public. Hundreds took to the street and gathered outside the Government HQ to give support to students and demanded the immediate release of arrested students.

Professor Benny Tai, one of the “trinity” behind the Occupy Central movement, declared that the mass campaign officially initiated.

More and more people came and concentrated around the Government HQ, blocking off the main conduit linking Central and the eastern side of the Hong Kong Island.

The mass rally soon got out of hand.  The police fired tear gas and discharged peppy spray at will in the morning hours of 29 September in an attempt to disperse the crowd to restore order before the Monday rush hours.

The police admitted later that a total of 87 rounds of tear gas canisters were shot.

The mass demonstration rapidly spread — with protestors calling for the resignation of the Chief Executive and for the restart of public consultation of the political reform.

3. Where in Hong Kong are the demonstrations taking place? How many people are involved? Is there anything notable about the protests? 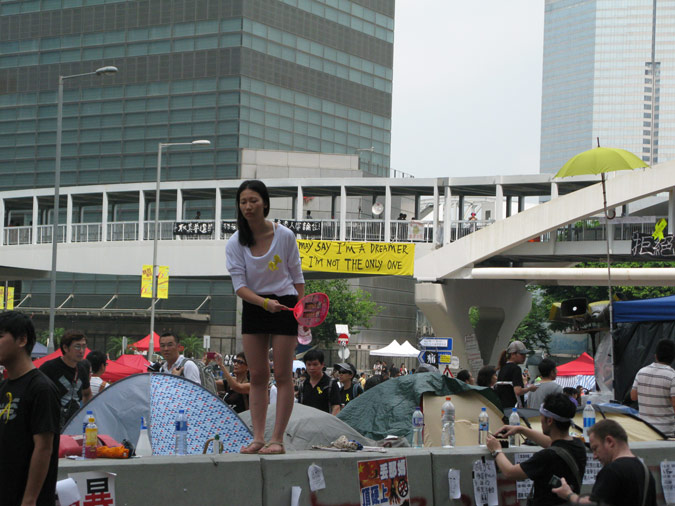 The demonstration originally concentrated around the government’s headquarters in the fringe of Central District on Hong Kong Island. As the movement progressed, more and more members of the public joined in, and the mass assemblies soon spread to Causeway Bay, Tsim Sha Tsui and Mong Kok.

While three groups initially organized the demonstration, the protest took on a life of its own with people joining and leaving at any time.  No official statistics are being compiled on the number of participants involved, although some reports place the number in the hundred of thousands.

Participants have shown exceptional discipline and order during the mass assemblies. They form themselves into squads to clean up garbage left behind by some of the protestors, and to maintain order.

Demonstrators have reportedly been attacked in Mong Kok and Causeway Bay by anti-Occupy protestors. With little police protection, demonstrators said they will withdraw from planned talks with government officials.

On Day Seven of the protest, more crowds have gathered around government headquarters in Admiralty, with the general thought is that law enforcement will clear the protestors before the weekend is over. 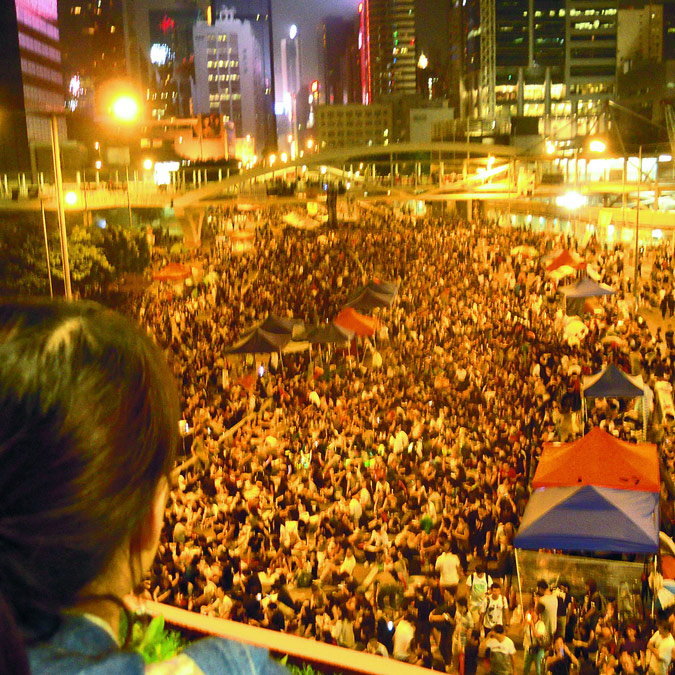 The mass, not deterred by attacks from thugs,  continue their protest in a peaceful and orderly manner, keeping a path open as to keep an unhindered passage for those who want to leave.

The Chief Executive has, again appeared on TV and appealed to the demonstrators to leave in order to restore order and routine of the city.  But his words are largely ignored.

Some academics are also trying to convince the demonstrators to leave as they are worried that tragedy would result.

It was reported  early in Day Eight that demonstrators are again open to talks with the city as long as police protect them at Occupy sites, previous assaults are investigated, and dialogues are conducted with the Chief Executive’s deputy, and not the Chief Executive himself.

University presidents pleaded their students to return to their campuses.  Heavyweight former officials,  including one ex-Chief Executive and two former chief justices, emerged from their long hiatus with a similar message.

Such parade of high profile public figures is most unusual in the city’s history.  What was unnerving to some was the consistency in their messages, as if reading from a common script, that said: retreat, or risk imminent personal safety.

The hope here is that all sides exercise common sense and restraint, and to resolve differences in a civilized and rational manner. 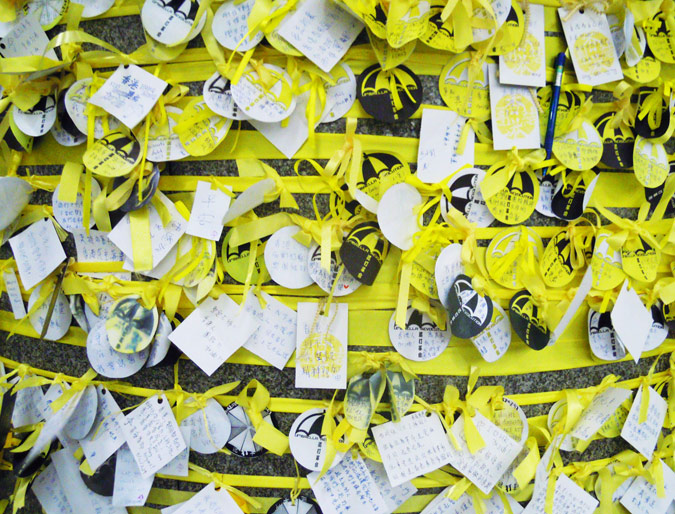 Enthusiasm seems to have subsided a bit after an uneventful night amid warnings of imminent suppression.  The number of participants in “occupied” areas near the Government HQ in Central has been noticeably reduced.

Despite the government’s continued announcement of serious traffic congestion in major road conduits, daily routines of civil servants to and from government offices in Admiralty remained largely unhindered.

Even with the waning support from the public, the largely unorganized open assemblies in Admiralty and Mong Kok show no sign of immediate closure. 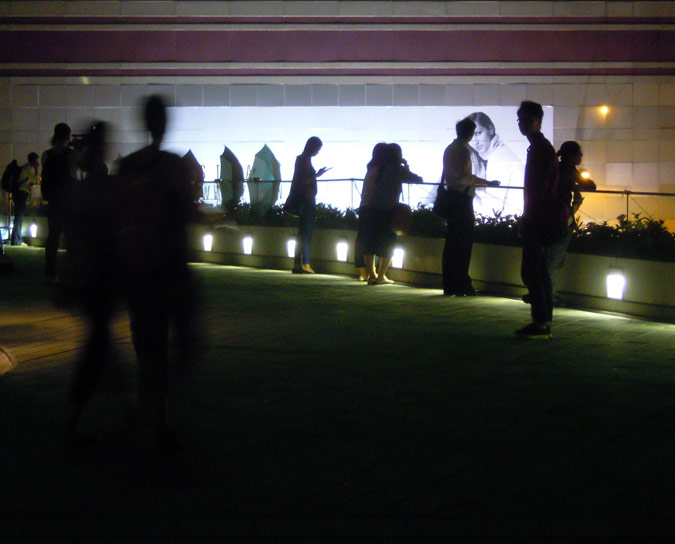 While some protestors remain, Admiralty has been rather quiet these past two days, a wait-and-see interlude as  government officials and student group leaders set up talks.

Reportedly, a series of preparatory meetings — to finalize the agenda — have been held, and a formal dialogue has been scheduled for this Friday. 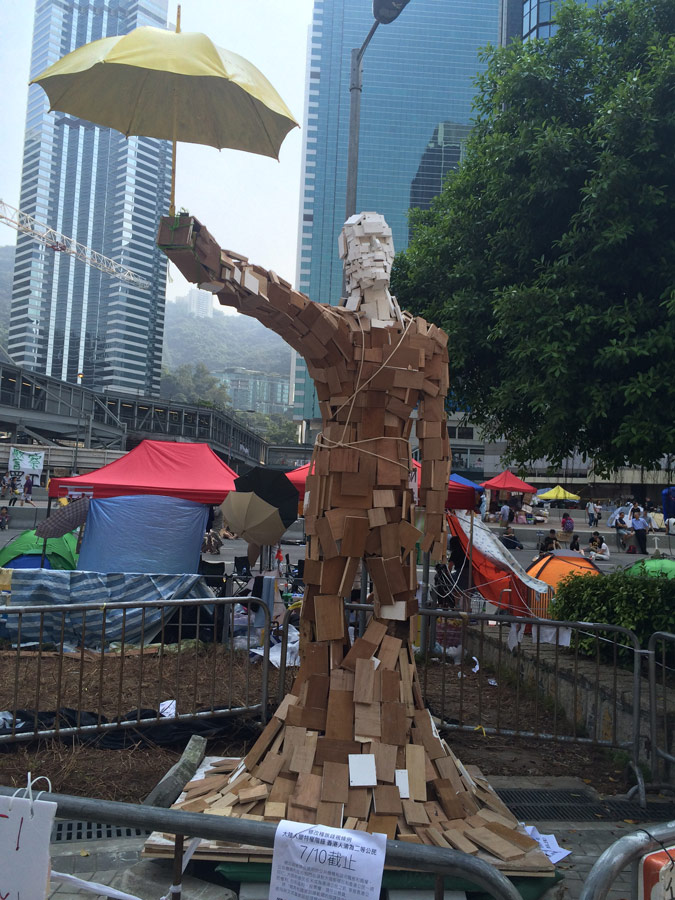 While protests are still occurring more roads are opening up, including Queensway, a main artery, in Admiralty. Meanwhile, yesterday’s much-anticipated talks between student leaders and government officials reached an impasse.

4. What is China’s take on the situation? 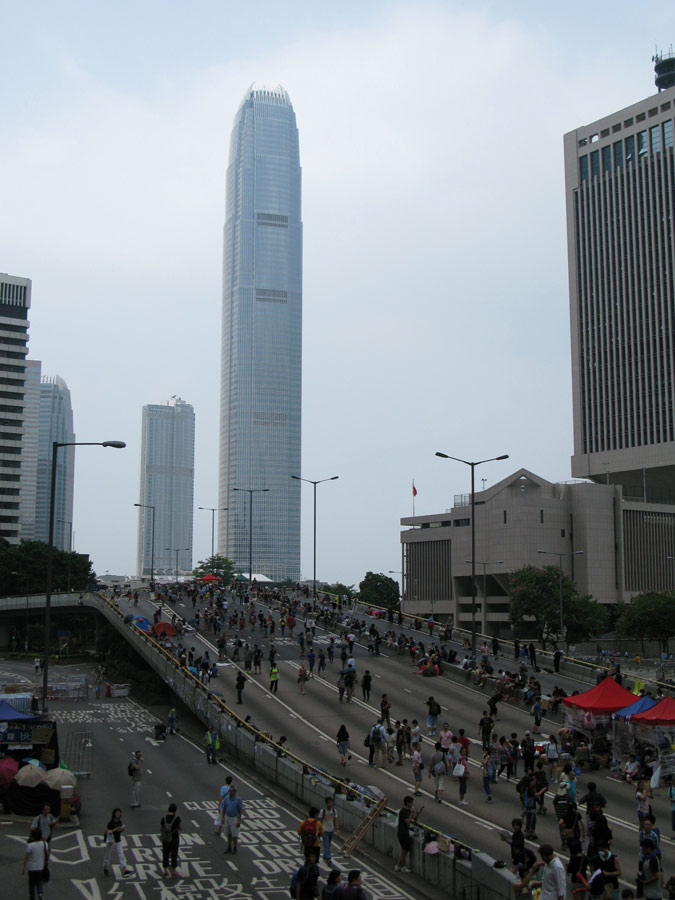 The Chinese government indicates disapproval as the movement has disrupted daily routines of the community and the business and other activities of the city.

5. Should travelers be worried? Will there be any disruptions to their schedules? 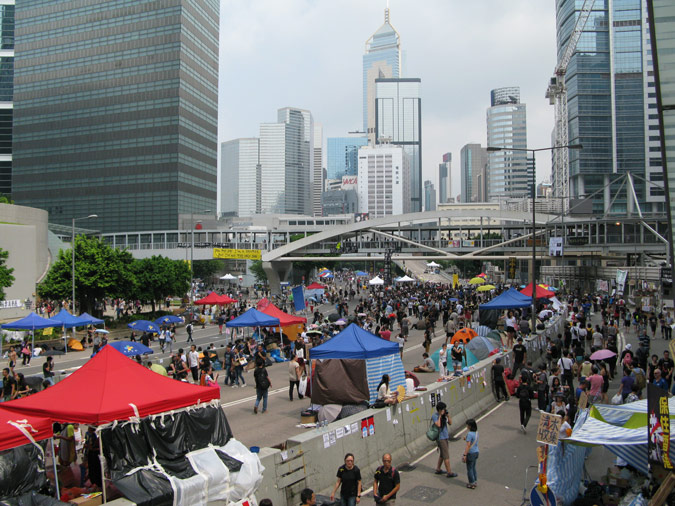 Demonstrations and mass rallies are being conducted peacefully, and apart from a few bus routes, and road junctions, transport in most parts of Hong Kong is largely unaffected.  Travellers need not be over worried, but caution is advised if mass actions escalate.

6. What are the prevailing thoughts and hopes on what will happen here? 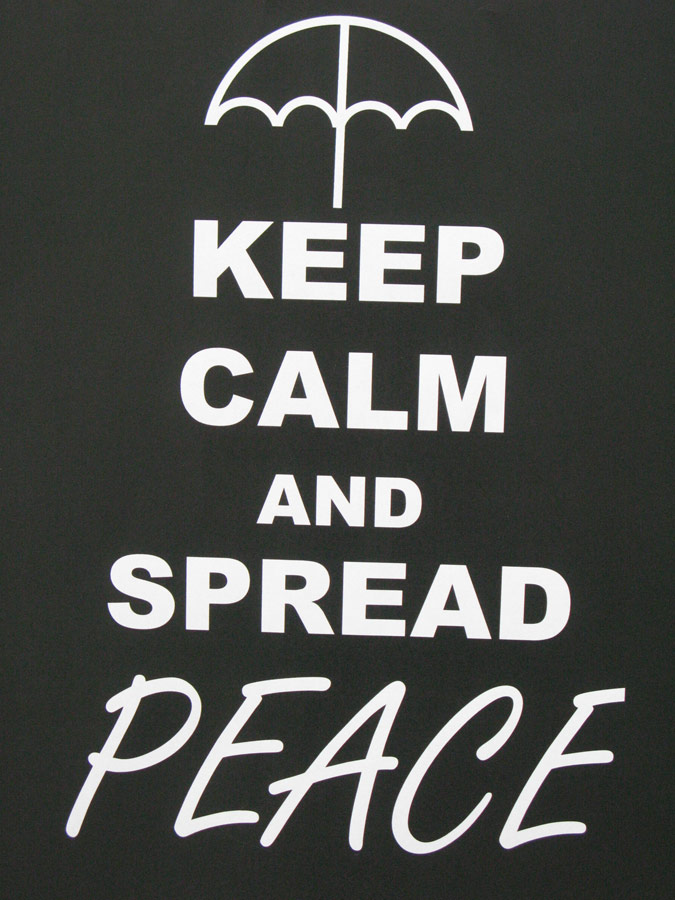 The predominant groups of demonstrators demand a dialogue with officials to negotiate a way out, and the Government’s response has, at times, seemed positive — although officials are adamant that the protesters’ demand for the resignation of the Chief Executive is not going to happen.

The other demand that the Government should retract its 2017 proposals and restart the whole process to formulate a scheme that fully meet the community’s aspirations is probably not going to happen either.

But the umbrella movement has awoken the civil society, especially young people, in regards to the political development of their city. And in its early days, the demonstrators’ freedom of assembly, as well as their peaceful and orderly manner, is something that should be cherished both as a right and an example for the rest of the world.

Tony Church can be contacted at tony@newswhistle.com