If you are local to Southport, Connecticut, you probably already know about the best book sale in New England. You may even be one of the reasons why the Pequot Library continues to open its doors and offer cultural and community programs. If you’re not familiar with the Summer Book Sale, though, you have a treat awaiting you.

First of all, come for the weekend. It’s easy to get to Southport from Interstate 95 if you want to drive up from New York (or points south) or down from Boston (or points north). Or you can take the New Haven line on the Metro North (commuter) railroad right to the Southport stop. Amtrak is a little trickier: the Stamford or Bridgeport stops get you relatively close but you’ll have to take the Metro North from there (or use a car service).

But in any case, this year’s Summer Book Sale (the 55th) is from Friday, July 24th through Tuesday, July 28th. Getting there early gives you the fullest selection, of course, but the highest prices: on the Friday, the books (and CDs, DVDs, etc.) are double the marked price. You’ll have your pick of over 120,000 items. Saturday is your best bet, though, because the prices (quite reasonable!) are as marked, and there will be a bake sale on the Great Lawn, a multitude of book lovers from all over the region, and a festive atmosphere, no matter the weather. The library itself is also just lovely. It opened its doors in 1894 with the motto “Free as Air to All,” which is about as warm a welcome as I can imagine. 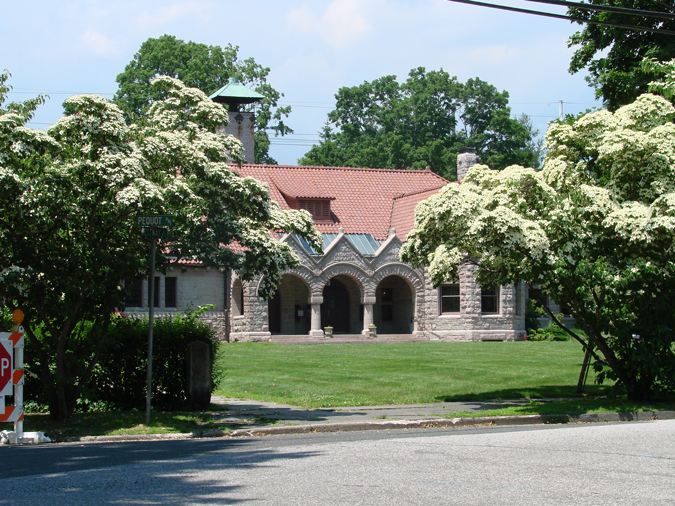 (If you make a longer, or a later, trip of it, the prices continue to go down as the sale continues…on Tuesday you can take your choice of whatever’s left for the bargain basement price of $5 per bag.)

Whenever you arrive, though, I advise you to stay at the Delamar, which is a charming hotel, right within walking distance. They have quite a good restaurant there, Artisan, with local and seasonal cuisine, and a lively bar scene in the evening. If you’d rather have Italian, check out Paci at the train station: you won’t go wrong there, either. For casual fare, you can try Sammy’s Southport Pizza & Grill.  Southport’s small, but lovely, and you can wander over to the harbor to see the sailboats, or down to the beach to watch the sun go down, or over to the local shops (the Fairfield Women’s Exchange is a particular favorite of mine).

But it’s mostly about the books. Come with large bags and take away whatever you can carry. (And, if you can, make a donation to the canned food drive at Trinity Church, which is kind enough to provide extra parking to all the book buyers.) You’ll be glad you did.

The most amazing story I’ve heard about the book sale is the time an elderly volunteer sorting books found her own copy of The Complete Works of William Shakespeare that had been a high school graduation gift from her father, sixty years after she’d accidentally dropped it while boarding a New York City bus back in 1944.

More recently, Adair Heitmann, the Pequot’s Director of Communications, told me that when she was working the sale a few years ago, a little boy, about five years old, took a picture book out of a pile and asked his mother to buy it. “Sure,” she said, and “oh, I loved that book when I was a kid.” And when she went to pay for it, she realized that he’d selected her very own copy of it…complete with her name in her five year old handwriting. 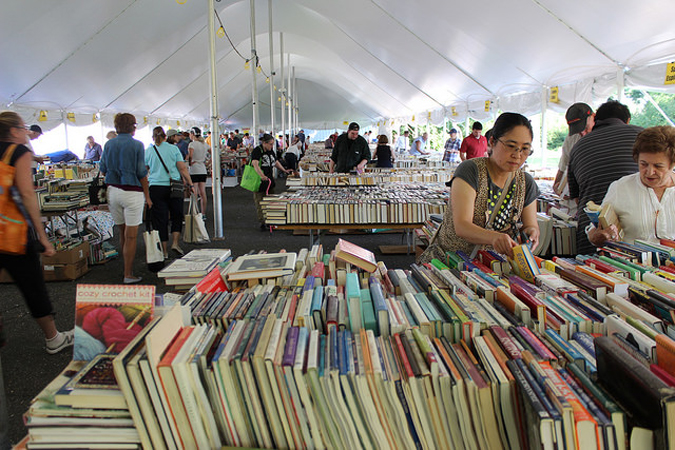 Heather-Marie Montilla, the Pequot Library’s Executive Director, was kind enough to make some time to speak with me…here’s what she had to say:

The NewsWhistle Q&A with Heather-Marie Montilla 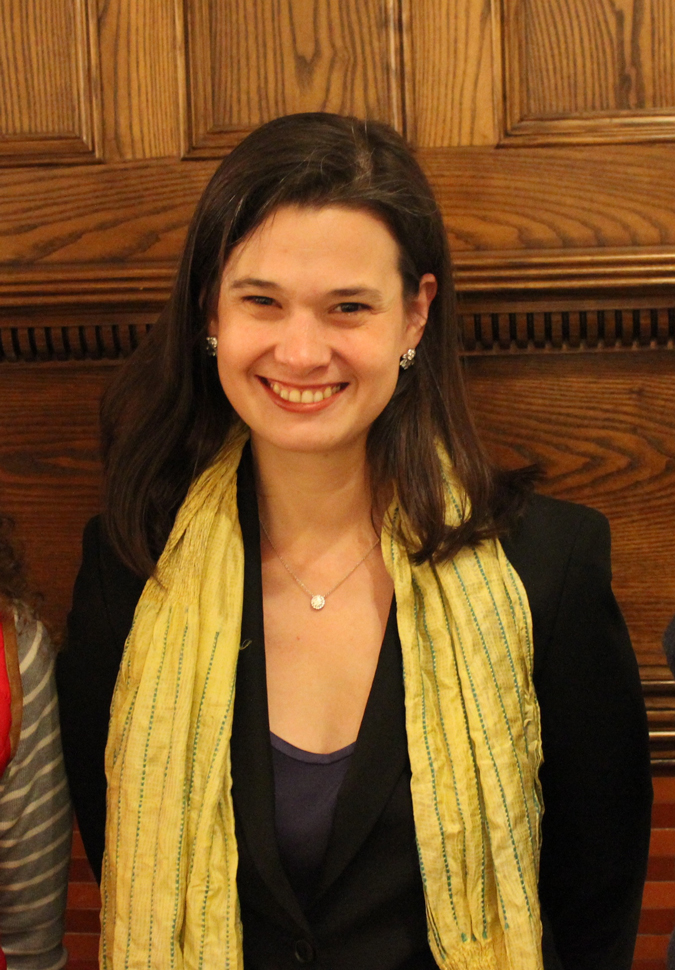 What’s something most people don’t know about Pequot?

This library was founded by Virginia Marquand Monroe, a woman who had been adopted by an uncle, and inherited his wealth. She dedicated the library to him, but she had also lost a young son, so I think that this donation to the town was partly in honor of him, as well. Another early benefactor, Mary Wakeman, had lost a daughter, and the Stacks (still in use) and the Tiffany windows honor her memory to this day.

The library was built in secret; Mrs. Monroe didn’t tell anybody what she was doing. (Some people actually thought it was a barn.)

The architect, Robert H. Robertson, was very prominent in his field.

Another person who was an early benefactor was Reverend Holden of the Southport Congregational Church. He had a great quote about planting the seed that grew into a mighty tree. This library, still here so many years later.

Another thing that many people don’t know about Pequot is the strength of its Special Collections.   We have a great collection of materials from the founding of America: letters, Colonial history, over 30,000 items from the 1400s to the early 1900s. Yale University houses 2,000 of the significant items for us. We have an autographed book of poetry by Phillis Wheatley (and two other early editions of her work). We have genealogical information, collections of pamphlets, sermons, papers from prominent local families, Civil War history. Because some of Pequot’s board members over the years have come from publishing backgrounds, we have some amazing manuscripts here as well, including one from Margaret Mitchell’s Gone With the Wind.

What are the challenges in leading an old and beloved community institution?

We need to stay on target with our mission, and make sure that everything we do, and all our events, fulfill that mission.

One important question for us is how we want to build our relationships with our partner institutions for the long haul: building upon past relationships, we’re hoping to create and expand some strategic alliances.

What institutions are these?

Yale University, for one. And Music for Youth, which presents free concerts here at Pequot. And the Wakeman Boys and Girls Club (because of the historical association with the family), the Westport Arts Center, WSHU, the Cultural Alliance of Fairfield County, the Town of Fairfield, and Fairfield University.

We are trying to be a cultural beacon: to open our doors to all ages and to people of all levels of education.

What do you see ahead for Pequot?

We need to raise some more money. I’d like to get more school groups here, and more involvement from local churches and our local universities.

Our Special Collections shouldn’t be just for historians and scholars. They should be for everyone who is interested, from elementary and high school students learning how to do research, to local residents who want to know about the history of their town. 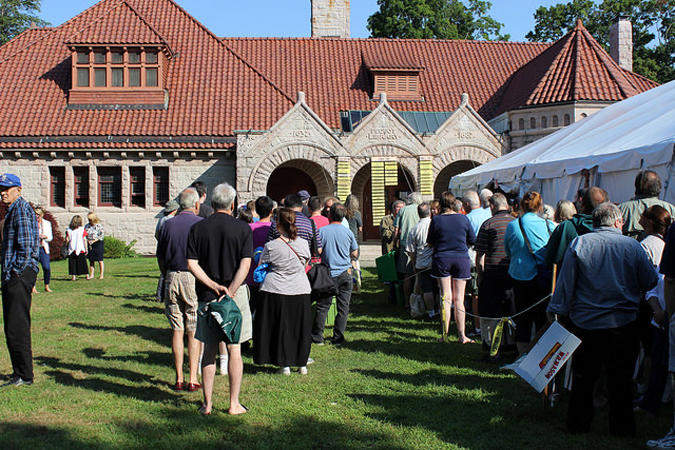 What’s the strangest item that’s been donated to the book sale?

Someone gave us a carved giraffe bone. And a saddle.

We recently got a signed first edition of Slaughterhouse-Five. We’re not selling that one; that could be part of a special exhibition in the future!

We have a collection of special items that are going to go on sale, though. This year we will have first editions of To Kill a Mockingbird, East of Eden, Coming of Age in Samoa, A Connecticut Yankee in King Arthur’s Court, and The Old Man and the Sea. Those are going to be only sold on-line, and the on-line sale will go live on July 13th.

Oh, and we will also have a book called Ladies in the Rough (it’s about golf!) and one called Memoirs of a Shy Pornographer.

The jokes just write themselves.

What else should we know about the book sale?

It’s a huge undertaking. We have 200 volunteers (as well as everyone on staff here) working on it. It’s an amazingly popular community program. We’re recycling books! And it helps raise money. It’s 10% of our budget. We get 1/3 of our money through the town’s generosity and we have to raise the rest of the $1.16 million operations budget ourselves. But we do a lot with the money we raise: we see over 90,000 visitors per year, and have over 500 programs.

There are some great rarities to be found at the book sale. Some of them we know are special and we let them through (and don’t pull them into the Special Collections) so someone gets the joy of discovering a treasure. And some of them are accidental, because although we have people sorting the books who really know what they’re doing and can identify their value, some things just slip through because the sale is so huge.

And we have a great books for teachers program for public school teachers in Bridgeport and New Haven, where they can apply for a $100 voucher for their classroom libraries, through a grant from the Renée B. Fisher Foundation. 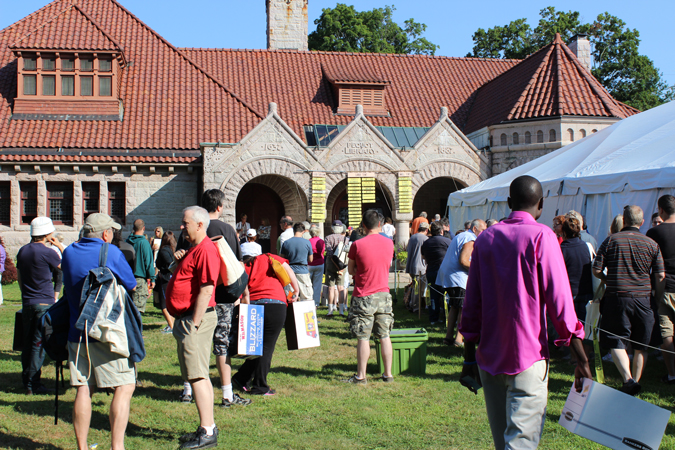 Re-read a book you read in high school. I recently re-read To Kill a Mockingbird; for some books, reading them again will make you realize the impact they had on you.

I was a risk taker before I was 22. Now I’m pretty risk-averse. I have five-year plans!

Make all the mistakes you want for the first 100 days.

I really like Michael Kaiser. He’s a non-profit manager who turns around non-profit institutions. I’ve loved him since the 1990s. He was the head of the Kennedy Center, the Royal Opera House, Alvin Ailey. I really admire the work he’s done with cultural non-profits.

The funniest thing is that my son, in second grade, was in a school play: he was Chicken Little. He asked me to make a costume for his character so I spent all of my Sunday gathering materials and I made him this adorable costume (I sew), with orange tights and a chicken headpiece. And I went to see his show and he didn’t have the costume on! None of the kids had costumes! Fortunately the teacher said to him how cool it would be if he had a Chicken Little costume…and he put it on, and it looked fantastic.

Was the sky falling?

Yes! And he was great!

I am a secret sew-er. (Of things like Chicken Little costumes.) 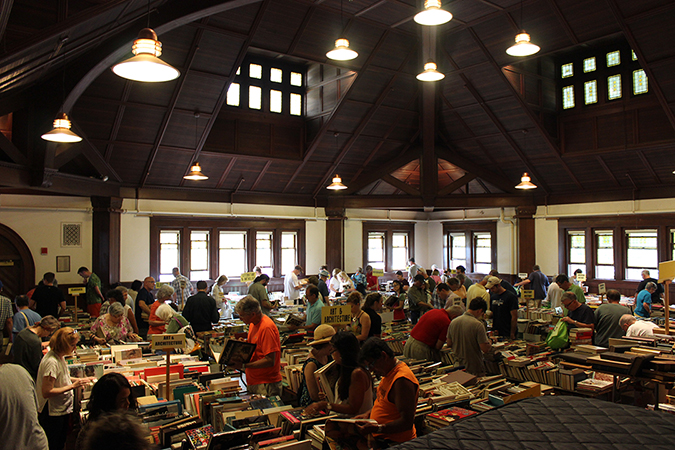 Images Courtesy of Heather-Marie Montilla and the Pequot Library