Last month, NewsWhistle contributor Sam Whiskey headed to the Indonesian island of Bali for a vacation.

Near the middle of Bali rests Ubud, a leafy-green town filled with hot, sleepy, hilly wonder.

There’s a forest ruled by monkeys, a local market pilled with crafts and wares, and swaths of stepped rice paddies that are etched into the green rises of land.

While in Ubud, Sam crashed the latter part of an all-day wedding ceremony. What he didn’t know was that he was crashing a double wedding, and a royal one to boot.

So how do you crash a royal wedding? In Sam’s case it begins with a friendly and open-minded taxi driver.

After exploring the side streets of Ubud for a few hours, I needed to head back for an afternoon paddy field walk organized by my hotel.

I hailed the first motorcycle taxi I saw.

The driver was more than eager to drop me, but wanted a steep price for it. We negotiated to what I thought was a fair price. On our ride over to the hotel, we passed by a temple that seemed bustling. A large crowd of tourists had gathered around the entrance, watching delivery men unload everything from speakers to chairs. While our motorbike zigzagged through the city center, I asked my driver what the buzz was all about.

“There’s a wedding tonight,” he answers.

“It is. Would you like to attend?” he casually asks.

“Tourists can go. I can come pick you up at 7. And I’ll bring you a sarong for the wedding,” he suggests.

I ponder Wayan’s invitation. ”I made plans for a yoga class in the evening. And I’m no wedding crasher. But how often will I have an opportunity to attend a local Balinese wedding?” I rationalize.

So I remember Richard Branson’s mantra – “Screw it, let’s do it.”

“Wear this. And you walk in.”  In his limited English, these were the exact instructions of Wayan, my driver.

“Whose wedding is it?”  I ask with growing curiosity.

“It’s a double wedding. For two brothers,” he confidently replies, as he robes me in Balinese garments – two sarongs (kemben, the bottom layer, and kencrik, the top layer), a belt, and a white headband (udeng).

Wayan drops me off outside a local gelato shop – two blocks away from the wedding venue – motioning that there is traffic ahead, which wasn’t apparent to me.  I’m now a bit concerned of his intentions.  Did I just fork over a wad of cash for a tourist “wedding package”?

As I approach closer to the venue, a number of dazzling congratulatory signs and bouquets welcome me, ensuring that some sort of celebration is in place. I’m still unconvinced if it’s wedding as Wayan promised, as this is the Puri Saren – the Ubud Palace, located in the heart of the city center.

A group of lavishly-dressed Balinese men are swaggering into the party.

I tailgate behind them.

Just before we enter, one of the men yells out, “Stop!”

The group makes an abrupt halt to capture a pre-event snapshot. My initial entry plan just got foiled.

I have no option but to go solo.  Avoiding eye contact with the black shirted men on duty, I casually and confidently stroll in, as Wayan instructed.  Through the corner of my eyes, I can see the guards about to signal me.  I squirm temporarily, but I hear nothing.

Inside, the ornately decorated palace has numerous floral arrangements – pink and white roses, orchids, lilies, and coconut leaves. The place smells of a spirited botanical garden.

I take stock of what everyone is wearing, and realize that I quickly stand out – I’m the only one in white and am not sporting a handsome mustache.

I’m bound to be caught.

This is short-lived, as a family of mosquitoes, also decided to crash the ceremony. Their feast begins with me.

The wedding party is off to a slow start.  The men behind me decide to give their Marlboros a go. The guy sitting next to me is winding his watch. Then he taps it.  Then he winds it again.

Finished with my mint lemonade, I’m feeling a headache coming on. Was there alcohol in the welcome drink?  I soon realize that throbbing is a result of the tight Balineses headband.

The buffet is ready. The older gentleman next to me mumbles something in Bahasa – perhaps thinking that I’m a guest from Jakarta. The line moves surprisingly slow and orderly. The guests are in no rush. For a palace wedding, the spread is simple, but delicious – sautéed vegetables, chilly shrimp curry, and chicken satay. For dessert, a tangerine and chocolate ice cream.

I’m still unconvinced that I’m at a wedding. I still haven’t spotted neither a groom, nor a bride. Let alone groom #2, and bride #2.

A flat screen TV has just been turned on by a staff member. It’s playing a wedding ceremony.  Could this be it? I examine the programming on the television closer. It’s taped during the day. And there are two couples getting married. Alas, did the wedding already take place and I’m simply attending a public function?

Many of the guests are now trickling out. Disappointed, I join them, hoping to make my way to the hotel.

After exiting, I find myself in a courtyard, where a large group is queuing.  On stage, I spot two married couples ceremoniously standing.

We have made contact. I rush over to take a photo on my old phone. 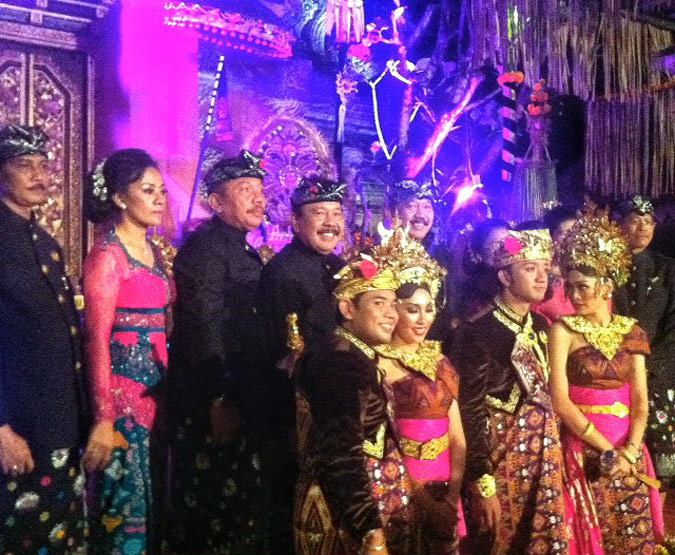 I inquire with the event photographer next to me about who these brothers are.

“They are actually cousins. One works in tourism, and the other in marketing.”

“How often do they have weddings in the palace?” I wonder.

“Not often. The last one was six years ago. I was an event photographer at that one too.”

“What’s so special? Perhaps they have the right connections?”  I question.

“Actually, the groom closest to us is the Prince of Ubud. Tjok Ichiro Sukawati.”

Upon closer inspection, it is apparent that this is no ordinary wedding. First of all, it is at THE palace. Secondly, the men are fashionably dressed in burgundy jackets, gold crowns, and golden swords on their backs.  Their new wives, also hailing from noble families, are donning magenta saris and elaborate gold crowns.

As I stand in amazement, I notice two ladies who seem just as out of place as I am.  I inquire where they are from. They are guests from Hong Kong.

They immediately quiz me, “Which member of the wedding do you know?”

“Neither. I’m crashing this wedding.” I confess.

“Seriously? And you wore this Balinese outfit just for this occasion?”

“I think so. But at least you got into this party,” she consoles.

“And who from the wedding party do you do know?” I ask

“The Prince. I know him from university in Australia.”  She smugly claims.

She fumbles with her mobile phone to show off some photos of him.  Let’s see, there’s a snapshot of the Prince and a group of friends out and about on a weekend.  And then there’s even a selfie of the Prince.

“I’ll have to tell him that you crashed his royal wedding” She remarks with a smile.

Later on, I inquire “Is there an after-party for the wedding?”

“It’s inside the Palace. But I don’t think you can come; it’s for invited guests only.”

With that, the ladies leave me behind for their VIP back-palace party.

In the mean time, I stay behind in the courtyard watching the aristocratic grooms and brides greet, shake and kiss the rest of the wedding attendees, until that too comes to a close.

It’s time for the royal family photo. As the members line up, I notice the King, Tjok Putera, looking directly at me, and laughing.

Growing in unease, I awkwardly look left. Then right.

His laugh is surprisingly filled with joy. Almost child-like.

I turn around to see a flat screen TV that I’m partially blocking. It’s displaying photos and home videos of the young grooms as boys – blowing birthday candles, breakdancing, and just acting silly.

80s breakdancing and iPhone selfies  – I like these royals already.

For more info about the event, please see coverage from The Jakarta Post and the blog Ubud Now & Then.