We went with friends on a lovely trip up the west coast of Nicaragua. One stop was in the old town of Leon, Nicaragua’s second largest city.

While there, our travel mates suggested we stop at the local insect museum, the Museo Entomologico de Leon. Our friends had been there before and, as far as museums went, they said this one could not be missed.

They were right. Inside the small exhibit were hundreds of specimens of insects: spiders, scorpions, scarabs, butterflies, and more.

These preserved creatures were mesmerizing in their glass cases. And to top it all off, the founder of the museum, Dr. Jean-Michel Maes, was there, answering every one of our enthusiastic questions.

A year later, while flipping through a book, we found Dr. Maes’ business card, and kicked ourselves for not having interviewed him sooner. Time sure does, ehem, fly. 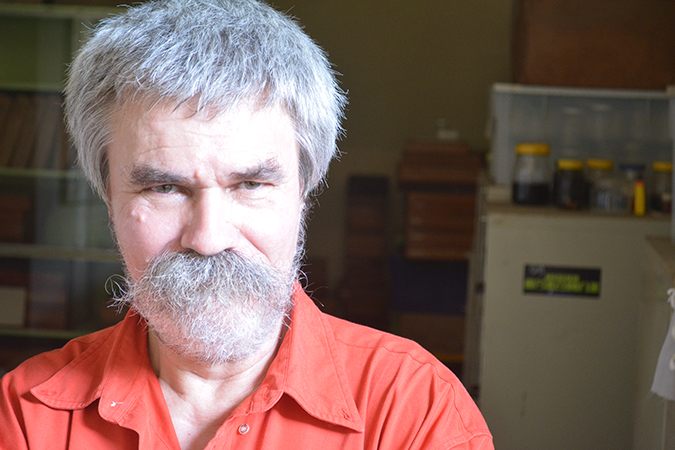 1. How did you find yourself working with insects?

I came first time to Nicaragua in 1983, for a project using the Cotton Boll Weevil (Anthonomus grandis) as a biological control agent.

That was for me a revelation. Nicaragua is a wonderful country for insect collecting. In 1984 I finished my contract on cotton and decided to stay, studying insects in Nicaragua was looking like a good idea.

I decided to make an inventory of the insects of Nicaragua.

30 years later, I am still trying to do the same. 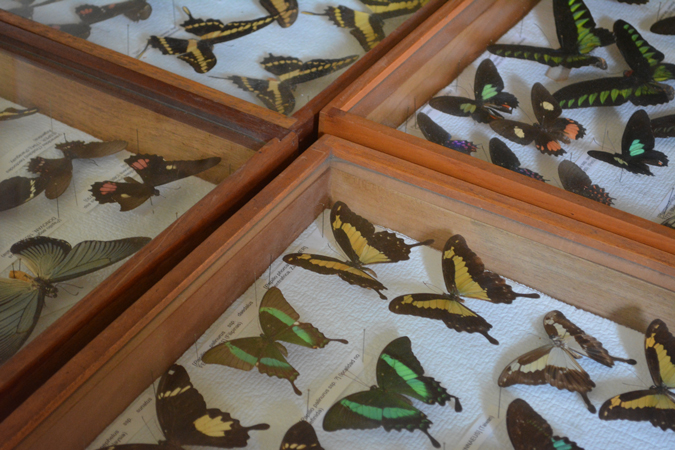 2. How old is the museum? Did you create it? How many specimens and species are on display? Are they all from Nicaragua?

My collection began before I went to Nicaragua.

The first embryo of the collection is my own collection made in Belgium from 1975 – 1982.

Than I moved to Nicaragua, and later I brought my collection there also.

There were two separate concepts: collection and exposition. The collection began in 1975. From 1990 to 2000 we made expositions in several public places like National Museum and Communication Palace (Mail Central Office) in Managua, also in the French Alliance (both in Managua and Leon).

In 2000, my wife and I decided to open a public exposition. The collection is around 500,000 specimens (more than 10,000 different species) with the exposition being rotating… with around 1,000 specimens exposed at a given time.

The collection is a mix of insects from Nicaragua and from the world. 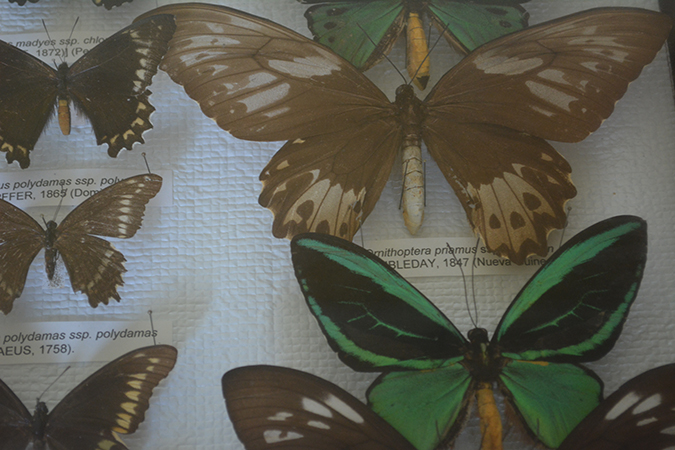 3. Why is there a need for an insect museum in Nicaragua? What are your favorite insects at the museum?

I think there is a need for more museums as an alternative way of promoting education and/or culture.

There is also a need (not covered by any institution) of a national biodiversity collection.

Another need (also not covered) is an identification system, a place where to go to get a name of an insect.

As for my favorite insects, I like more the scarabs, so my favorite bug is a purple Plusiotis luteomarginata. Specimens are mostly green in this species. We have a pink one, too. 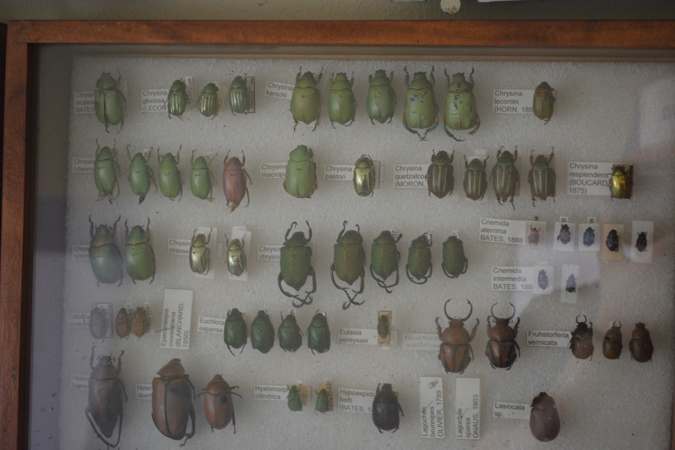 4. What are people’s reactions when they visit the museum? Are they thrilled? Scared?

The reaction depends a lot on each visitor’s previous experience. We have had people coming to try to get rid of arachnophobia. Others are coming to find new designs for fashion or art. 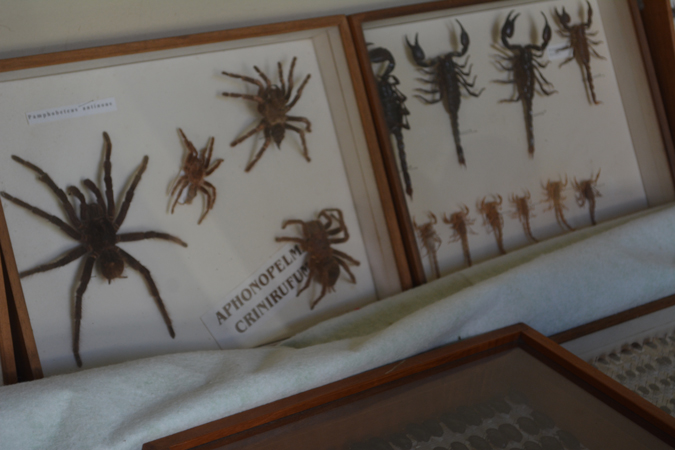 5. What’s the funniest or silliest thing that happened at the museum?

Nothing funny, it is a serious museum. The rare thing is that sometimes people enter the museum just for a moment, to fill a hole in their tourism program, then they get interested, ask for more information about other aspects of biodiversity in Nicaragua and we end speaking for an hour about the Canal project, potential reforestation plans of the cattle growers, legal problems of nature conservation, etc. 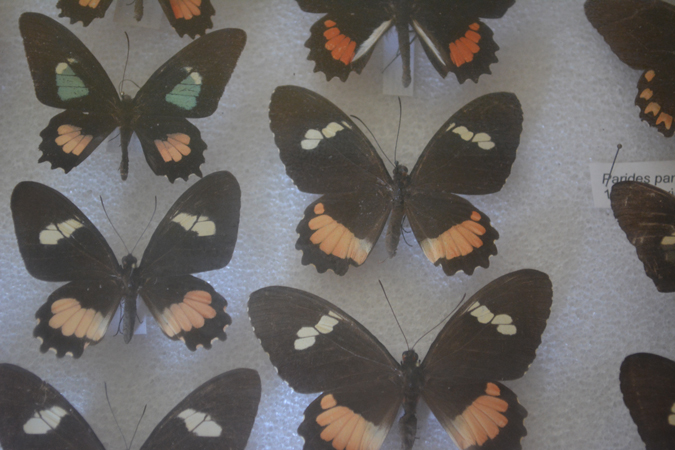 6. What do you tell people who are terrified of bugs? 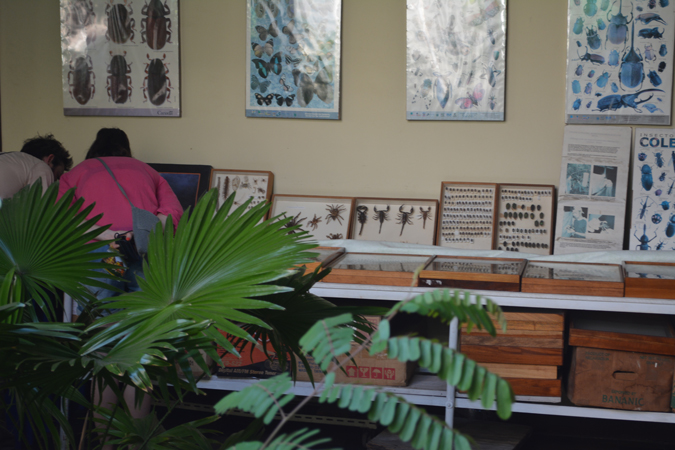 7. Why is entomology important? What can people learn from insects?

As for the economy, they are a serious competition in our business, we grow beans, corn, or any other plants and some insects can also eat that, most of the time they eat first. 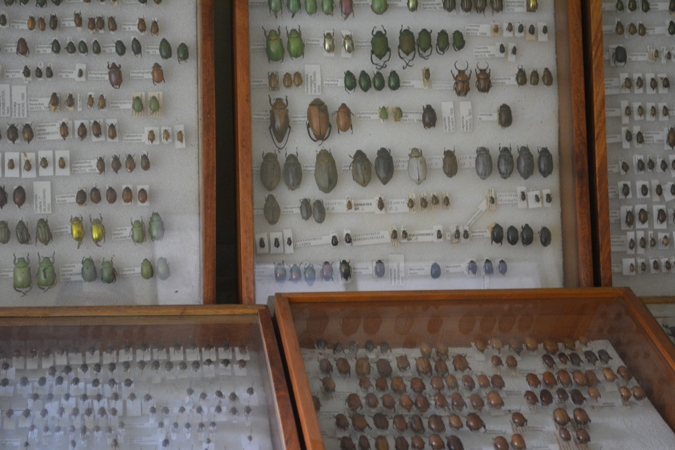 8. Do you collect mosquitoes? Can you tell us a little about the Zika virus? How has it affected tourism in Nicaragua?

In my normal work I do not work on mosquitoes, but we are setting up a project with some friends to create a modeling program to get fast alerts in case an Aedes mosquito population is growing somewhere. In this case I will work with mosquito larvae.

Zika is growing slowly, I think we are around 200 cases officially, so probably 400 or 500 cases in reality. Rain is sporadic for the moment, so it’s the exact conditions to have an increase of mosquitoes and Zika.

So far it’s not affecting tourism, at least I think so. We will have real figures later, as statistics are never in real time. But as far as I can see in the streets, seems to be the same. The U.S. has sent an alert on the Internet but mostly for Brazil, advertising to avoid going there, mostly for pregnant women.

9. What can be done about Zika?

The idea is controlling mosquitoes. The government is doing partially well. They’re visiting house by house to control mosquito larvae, checking each house for receptacles that can potentially host mosquito larvae, and explaining to people that they need to avoid even small receptacles with water. Then they put “Abate” in the receptacles. I do not like so much that part, “Abate” is a chlorine insecticide, and it can be replaced by Bacillus thuringiensis Israelensis (B.T.I.).

B.T.I. is a biological control agent that kills only mosquitoes and is non-toxic for humans.

10. Is there a specimen that you’d like to have for your collection, but don’t? If so, is it elusive or endangered? Explain.

In butterflies there is a white morpho reportedly in Nicaragua. I would be happy to know if it still existed here, even a picture of it would make my day.

That aside, all insects are interesting, and we try to add to the species we already have. We are a very small team, but even so we continue to describe one or two new species for science each year. 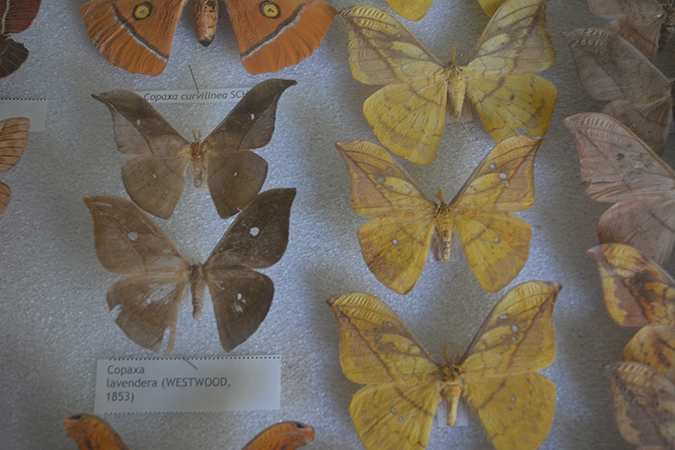 11. How do you collect your specimens? All they all trapped? Is it hard to collect different species? How do you trap them? And what is the hardest insect to trap?

There are many ways to collect insects. The old style of “running with a butterfly net” is probably the least effective.

We use mostly light traps, a light in front of a white sheet at the edge of a forest; butterfly traps baited with fermented fruits; Malaise traps, an interception flight trap looking like a tent made of mosquito net; and pitfall traps, a jar set into the soil baited with dung or rotten meat. There are many more kinds of traps.

The problem is not the collection of many different insects, the harder part is setting names to them. There are millions of species, perhaps 250,000 in Nicaragua, and hundreds of families and we need to get the collaboration of a specialist for each family.

If money were available, the best way would be to invite a specialist of each family for a couple of weeks. 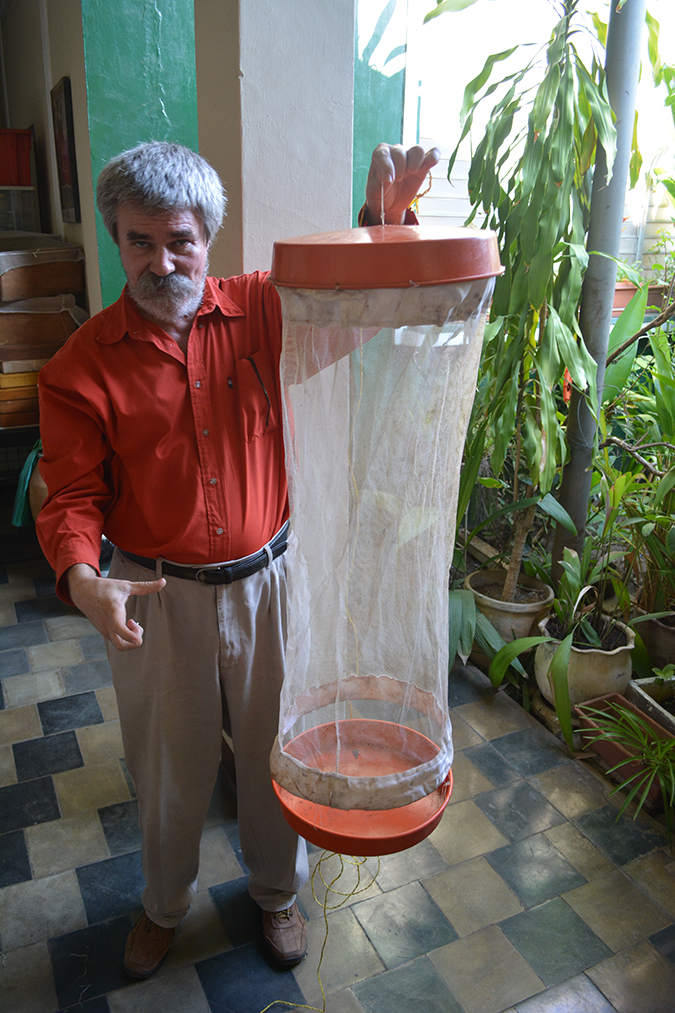 12. Are you from Leon? For people who haven’t been to Leon, why should they travel there? What are some of your favorite restaurants, bars or shops?

I am from Belgium, but I have lived in Leon for 30 years now. In Nicaragua, it’s one of the two main cities. Managua, the capital is not a city, it’s a big bunch of houses set together. Leon and Granada are real cities, both with a cathedral as its central point.

Leon is a colonial city, with the “mark” of Spanish organization, all streets are on a square angle, and the map looks like a crossword puzzle.

Tourism is just beginning, so it is still a “normal” city, not a system for tourists.

Not many restaurants, but my choice is the “comedores” – affordable spots offering local food. 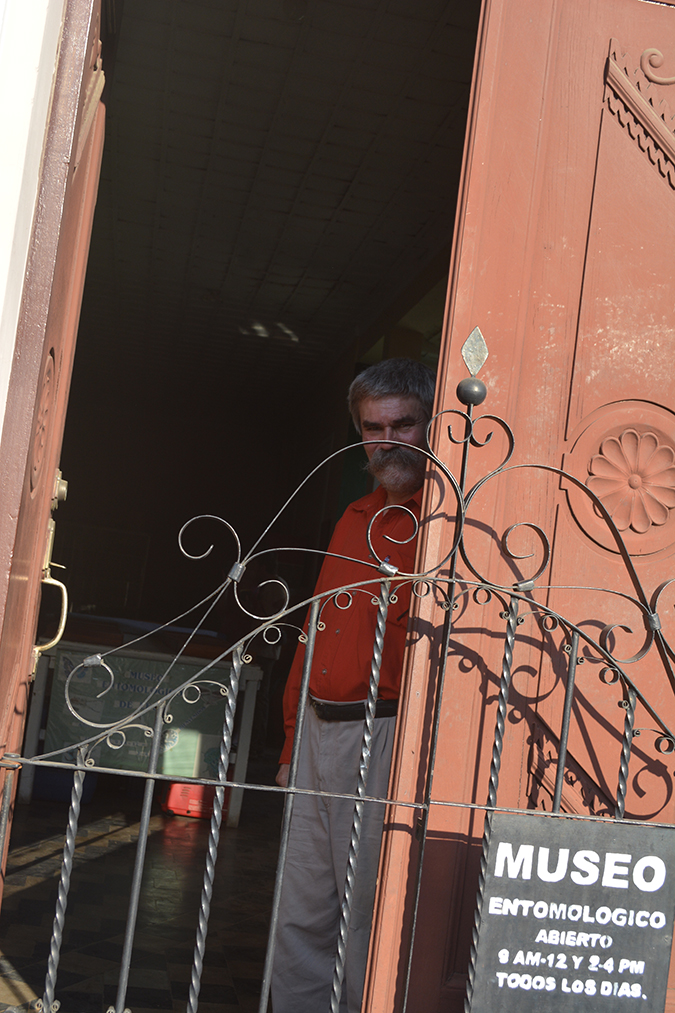 All Images Courtesy of NewsWhistle 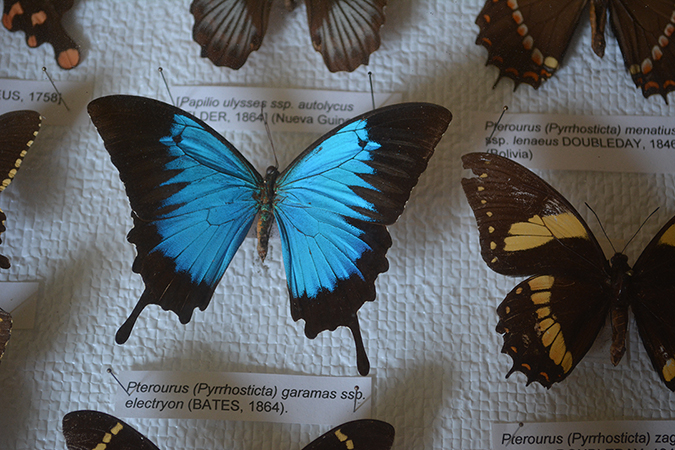