One of the coolest things about the Morris-Jumel Mansion is getting there.  Right off of an uninspiring stretch of Amsterdam Avenue (bodegas, fried chicken joints, check cashing storefronts), on a side street you’d never notice, is an amazing hidden gem.  Nestled in a small, gated park, on a cobblestone road (Jumel Terrace, between West 160th and West 162nd Street), is a stately mansion, the oldest house in Manhattan. 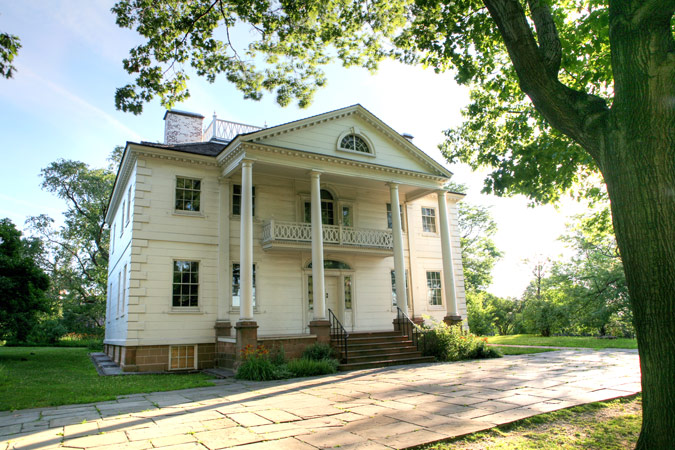 One of the other coolest things about the Morris-Jumel Mansion is its history.  It was built in 1765 by retired British Colonel Roger Morris, for his use as a summer country house.  First he, and then his remaining family, had to leave, after the rebellion against British rule broke out.   The Mansion was briefly General George Washington’s army headquarters during the Battle of Harlem Heights in 1776 (so yes, George Washington really slept here).

It was later occupied by British and Hessian forces, as the American Revolutionary War continued.   (Its high elevation and expansive views in various directions made it a pretty useful piece of real estate in wartime.)  Washington came back to the Mansion in 1790, by then the first President of the brand new United States of America, and dined here with his cabinet, including such luminaries as John Adams, Thomas Jefferson, Alexander Hamilton, and Henry Knox. 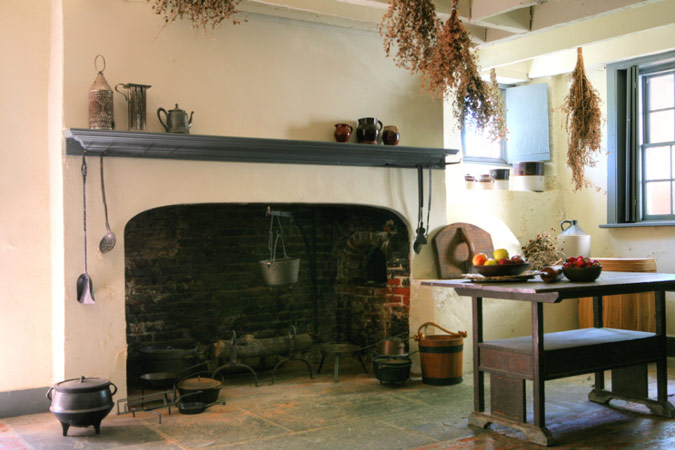 In 1810, Stephen Jumel purchased the Mansion (he was a French wine merchant from Haiti, at least until the Slave Revolt broke out), and he and his wife Eliza moved in.

Yet another of the coolest things about the Morris-Jumel Mansion is that Eliza Jumel lived in it.  Eliza Jumel, by the way, really needs to be the subject of a popular novel or television mini series…born in Rhode Island, daughter of a prostitute, she moved to New York and became an actress.  High society rejected her even after she married the wealthy Stephen Jumel.  Undeterred, she then traveled to France, taught herself French, became a Bonapartist sympathizer, and even offered Napoleon safe passage to New York after the Battle of Waterloo.  King Louis XVIII asked her to leave the country in 1816 as she was causing a bit too much controversy there. 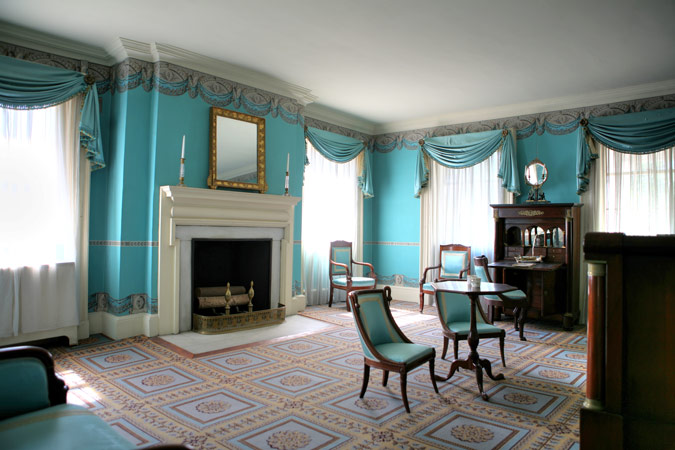 Upon her return to New York she established herself as a wise investor and smart businesswoman, managing the estate even as her marriage deteriorated.  Rumors circulated that she let Stephen Jumel bleed to death in 1832.  Somehow this didn’t scare Aaron Burr (yes, the controversial former U.S. Vice President who had killed Alexander Hamilton in a duel some 30 years before), although it seems likely that he was after her money and she after his social status. 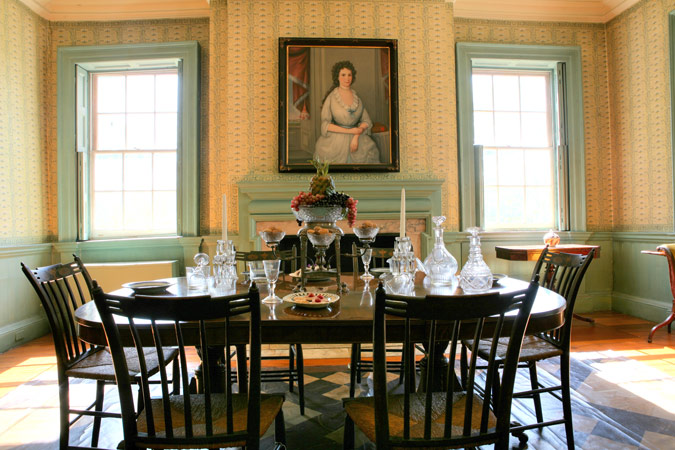 In any case, not being one to waste much time, Eliza Jumel married Mr. Burr in the parlor at the Mansion a mere fourteen months after her first husband died, and filed for divorce on the grounds of adultery soon thereafter (besides rumors of his infidelity, his real estate investments were proving to be exceedingly unwise: theirs was not a match made in heaven).

The divorce was finalized on the day he died, in 1836.  She ended up adopting her sister’s daughter, and taking her relatives on a grand tour of Europe (where she styled herself “the widow of the Vice President”), and lived at the Mansion until she died in 1865, at the ripe old age of 90. There is a legend that her ghost still haunts the place.

The property was then subject to a 20-year court battle, ultimately settled by the U.S. Supreme Court, and finally divided and sold.  The Mansion and a small piece of land (now Roger Morris Park) survived intact.  In 1894, General Ferdinand and Lillie Earle bought the place, and as they revered Washington and the Mansion’s history, they persuaded the City of New York to purchase it and preserve its historical significance, in 1903. 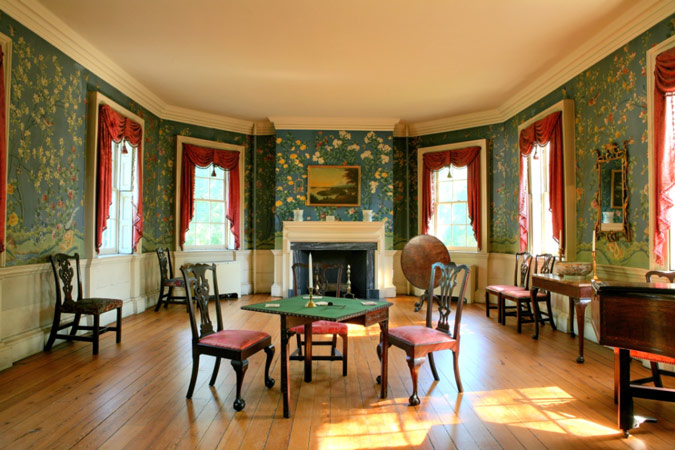 Still another of the coolest things about the Morris-Jumel Mansion is that it costs a mere $5 to visit.  ($4 if you’re a student.  Free if you’re under twelve.)  One of the true bargains of NYC.  If you want to spend just a little more, you can take a guided tour (it won’t break the bank at $12 to be shown both the Mansion and the surrounding neighborhood), or come to an event…they host tea parties, wine tastings, musical performances, historical lectures, family workshops, and lots of school children on field trips and after school programs.  (You can even rent the site out for a private party if you’re looking for something unique.) 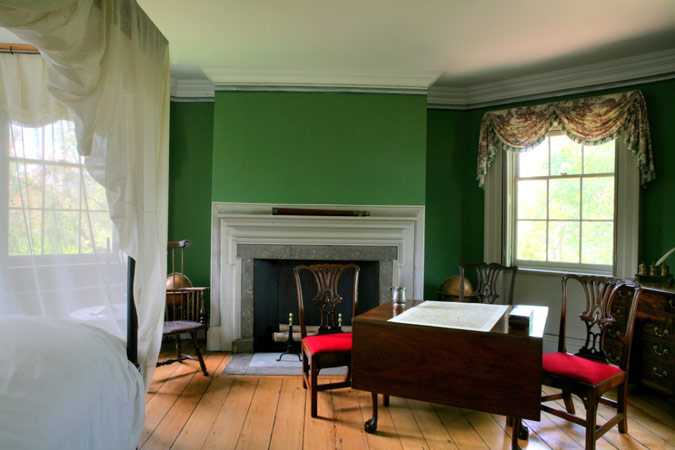 And the last of the coolest things about the Morris-Jumel Mansion is that Carol Ward is the Executive Director of the place.  She kindly took me all around its three floors, including where its most famous residents slept, explained that almost all the furnishings are the original ones, and showed me some of the arts and crafts projects that schoolchildren have done, the portraits on the walls, and even Eliza Jumel’s toilet/chamberpot chair.  In between interruptions by curious kids on field trips, here’s what we talked about:

The NewsWhistle Q&A with Carol Ward, Executive Director of the Morris-Jumel Mansion 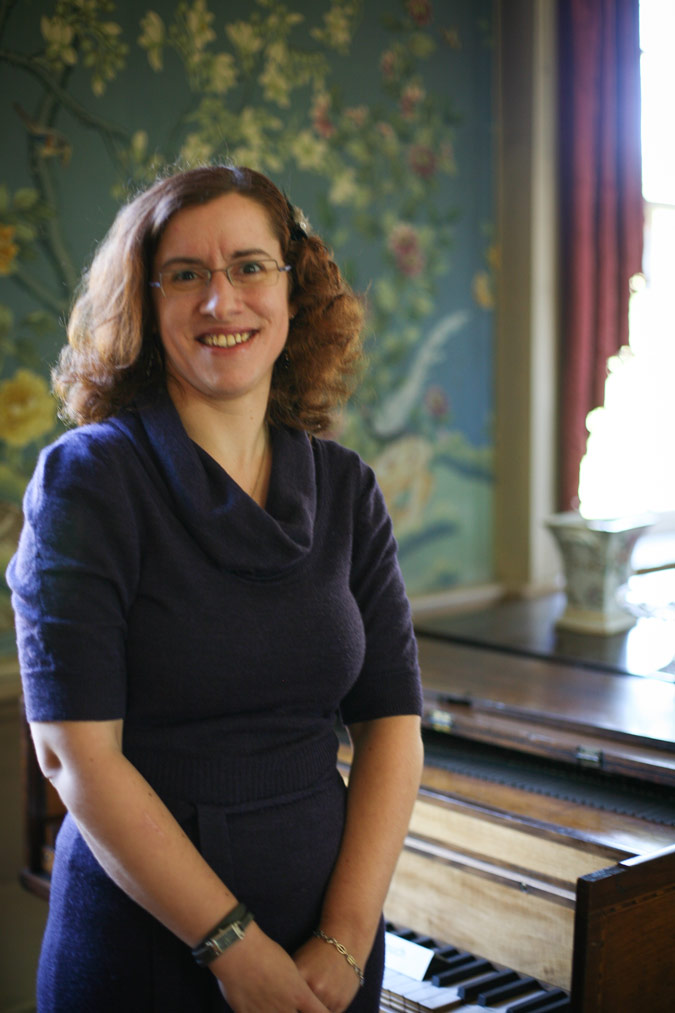 1. What’s the funniest or saddest thing that’s happened to you this week?
The funniest thing was late in the evening on Wednesday, while already in my pajamas, getting an e-mail from a Saturday Night Live film scout and then dealing with an overnight film shoot, which necessitated rescheduling a play, so that they could do a ghost hunter skit on location for their Halloween episode.   There were something like 50 people here running around in the middle of the night!

2. What’s your favorite movie?
Among the modern classics, it’s The English Patient.  And a classic classic is Charade, which is often called the best Alfred Hitchcock movie he didn’t actually direct.

3. What’s the biggest risk you’ve taken in life?
I think becoming the Executive Director of this museum.  My background is in history and museum education, and this opportunity came and I sold myself hard and went for it.  I didn’t have a lot of museum operations experience.  It’s a bigger job, involving more juggling of different priorities, than my former job here as the Education Director, but it is amazing to have the opportunity to shape where this museum is going.

4. If you could go back in time and do one thing over, what would that be?
I would be more outgoing in college.  I was very introverted and focused on studying, and I didn’t take advantage of meeting people and the social aspects of the experience.

It’s more of a one-liner, but it’s stuck with me from the Disney Beauty and the Beast movie: “If it ain’t baroque, don’t fix it!”

6. What’s something that most people don’t know about you?
I have a tattoo.  It’s inspired by art history, a 19th century woodblock print by William Morris, in memory of my dad.

7. What’s the best piece of advice you’ve ever heard?
From my mom: to take risks and go on the assumption than your path in life is not a straight one.  My first job out of college was in retail, not at all what I expected to do or what I was trained for, but it was a great job, I learned a lot, met people, and had an amazing life experience at Fortunoff’s.

Benedict Cumberbatch.  I love him in the Sherlock series on PBS, and I’m taking a trip to London in August to see him perform as Hamlet.

When I was a kid, I was terrified of the giant squid in the diorama at the American Museum of Natural History.  I was convinced it was going to come to life and eat me.  I still walk by that exhibit very, very fast.

Pride and Prejudice by Jane Austen.

Yes!  First of all, come visit the Morris-Jumel Mansion.  You can read all about visiting us here: http://www.morrisjumel.org/

2015 is going to be its 250th year and we’re having some great events to celebrate.  On February 5th, at the Public Theater, there will be a fundraising performance of Hamilton, the new musical by Lin-Manuel Miranda (of In the Heights fame, and a great friend to us) to benefit Morris-Jumel. http://www.publictheater.org/en/Public-Theater-Season/Hamilton/

And I’m very excited that we’re going to have an exhibit here by a British-Nigerian artist, Yinka Shonibare, who uses Dutch wax and African prints to create amazing nineteenth century-inspired costumes.  It will be his first exhibit in Manhattan, right here, April 24 through August 24.  http://www.yinkashonibarembe.com/

And I’m publishing a book! Morris-Jumel Mansion (Images of America).  It’s in the works and may be out as early as February.