The early morning earthquake was felt in Rome over 90 miles (+150 kilometers) away.

Many remote hilltop towns and villages have turned into rubble. Among the hardest hit centers are Amatrice, Accumoli and Arquata del Tronto.

Rescue crews with some 5,400 people have arrived on site for emergency relief. According to the national civil protection agency, who coordinates the rescue operations, more than half are volunteers.

France: Photographs released on Tuesday of armed French police ordering a woman on a beach in Nice to remove her burkini have sparked controversy across the country.

Similar incidents happened in Cannes. One example: a woman was fined for wearing leggings, a tunic and a headscarf on the beach.  Her offence was said to be not wearing “an outfit respecting good morals and secularism,” according to an AFP report.

Several French towns have banned burkinis, which cover the body and head, as it is considered to have defied French laws on secularism.  But the education minister, Najat Vallaud-Belkacem, was highly critical of the ban. And the Human Rights League, a French non-governmental organization, has already lodged an appeal.

A top court on Friday put a stop to the ban.

As a result of all the attention, burkini sales have increased, according to Aheda Zanetti, the Australian inventor of the swimsuit.  Zanetti said that she had to change courier companies to enable faster delivery to Europe.

For more we go to USA Today:

Sports: The16-day 2016 Rio Olympics ended with fireworks, festivity and fanfare for all.

Who stole the show at the closing ceremony? Unexpectedly, it was Japanese Prime Minister Shinzo Abe, who popped out of a green pipe in Rio’s Olympic Stadium in the guise of the Nintendo character Mario.

Abe was there to represent Tokyo, which will host the 2020 Olympics.

Looking back, Rio will be missed, and judged a success by most.

Some 11,000 athletes from over 200 nations – not counting a refugee team – participated in the world’s biggest sporting contest.

The U.S. team emerged at the top of the podium with 46 gold medals, followed by the UK and Chinese teams who won, 27 and 26 gold medals, respectively.

Athletic excellence aside, the Olympic Games also recognized the value of sportsmanship.

The International Olympic Committee (IOC) conferred the Pierre de Coubertin medal – AKA International Fair Play Committee Award — to New Zealander Nikki Hamblin and American Abbey D’Agostino, who helped each other cross the finish line after falling together in the middle of a race.

For a look at the closing ceremony we go to SABC:

Turkey: Turkish tanks and warplanes roared into Syria on Wednesday to join the opposition fighters against the Islamic State (ISIS).

The campaign, codenamed Euphrates Shield, was aimed at dislodging ISIS forces from Jarablus and stopping the Kurdish militias from expanding into northern Syria.

According to the Guardian, Turkish forces hit 81 targets in northern Syria with F-16 warplanes having shelled ISIS positions.  The operation was backed by U.S. airstrikes.

By evening, Syrian opposition forces had seized Jarabulus and its surroundings; it appeared that most of the militants had fled without a fight, as reported by the New York Times.

Russian authorities — who are allied with the Syrian government — reacted to the Turkey’s assisting the Syrian opposition in the incursion with only a mild condemnation, suggesting a possible reconciliation among Syrian factions ahead.

For more we go to the PBS News Hour: 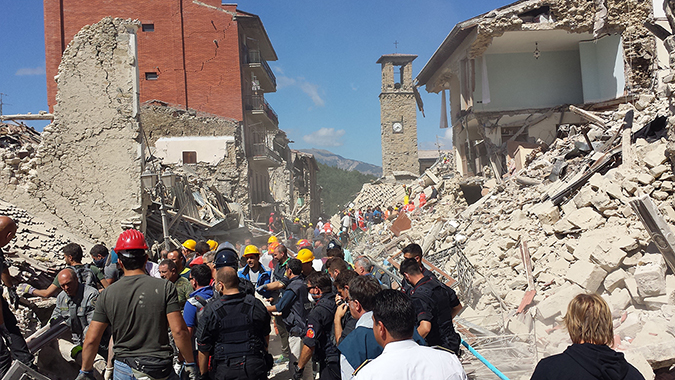