Recently, Asheville, North Carolina, was named the top city to visit in America by the Lonely Planet travel company.

Is Asheville a “number one” city? With some upgrades to its infrastructure, it sure could be.

For now, it’s an amazing little city, nestled in the glow of the Blue Ridge Mountains.

We were there for 26 hours – we know, a short time – but it was enough to get a feel and want to return. 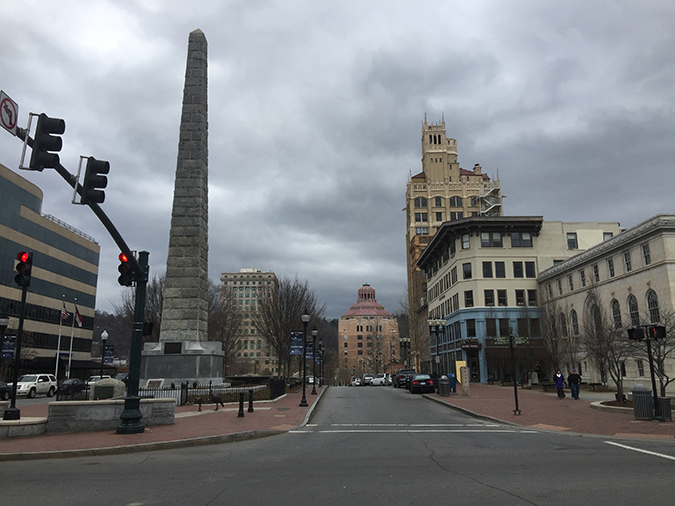 So what makes this Southern spot so sweet? 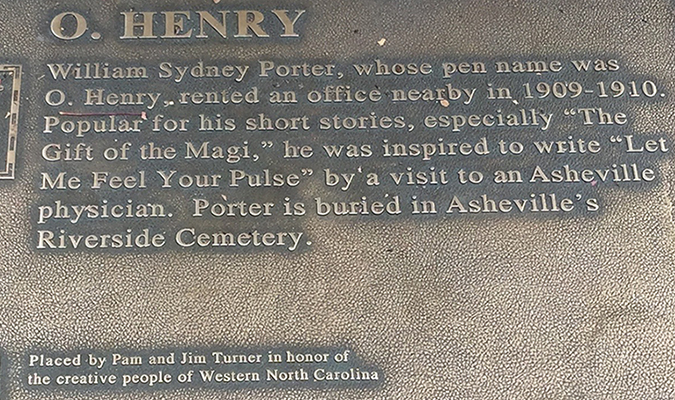 Asheville is a hub for the artsy and the progressive.

Really, there must be something in that mountain air.

O. Henry, Thomas Wolfe, Elizabeth Blackwell (America’s first female doctor), Charlton Heston, and F. Scott and Zelda Fitzgerald – all were drawn to Asheville at one time or another. And fortunately for you, you’ll have a better time than the Fitzgeralds.

Seriously, from outdoor beauty to indoor splendor, you’ll never be bored in Asheville. 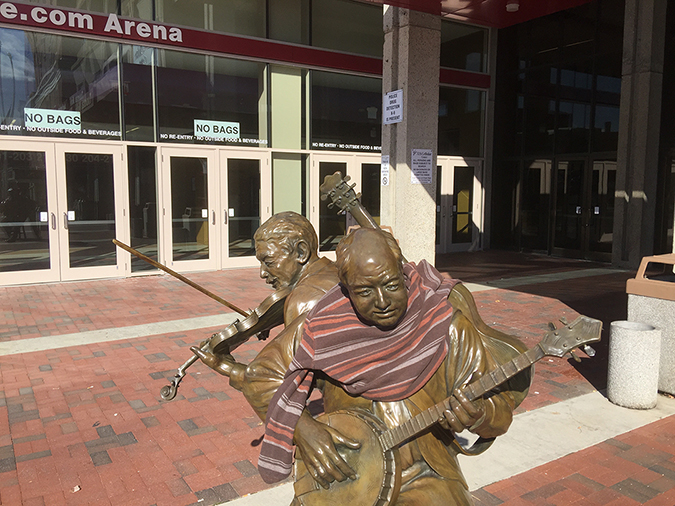 In one day, we zipped around the town’s historic arts district, ate some good BBQ at Buxton Hall, and caught an amazing benefit concert, the 2016 Christmas Jam, which went into the wee hours at the US Cellular Center.

Here’s Bob Weir playing with Warren Haynes and Branford Marsalis, a very cool set that we partially recorded for you:

THE FOOD AND BEER SCENE 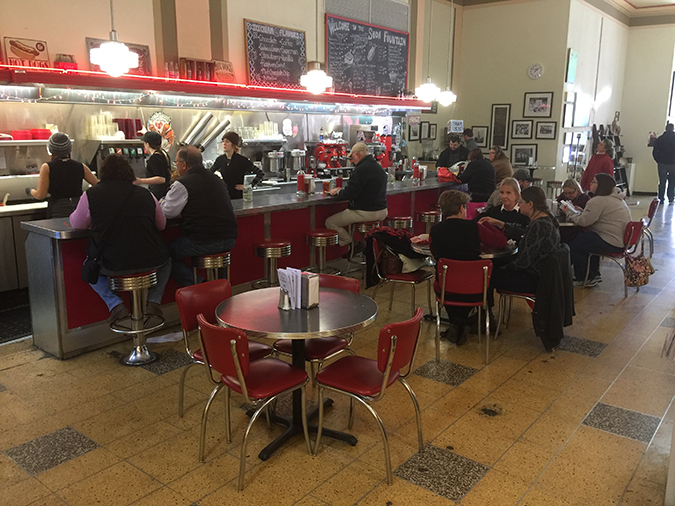 Bring your cravings for grits, BBQ, and sweet tea to Asheville. You won’t be let down.

You can have an afternoon snack at the pharmacy counter inside the old Woolworth’s building, savor some new smokehouse classics at 12 Bones (a President Obama favorite that keeps off-beat hours), or eat some southern treats at Tupelo Honey Cafe.

The city, we’re told, especially comes to life on the weekends, and residents take advantage of it, slaking their thirst with local brews.

If you have only one brewery to visit, however, it’s reportedly the mother of them all, the Sierra Nevada Brewery, affectionately called “Malt Disney” by the locals.

Scores of artists create and sell their wares in over 20 buildings in the River Arts District, a short shot away from downtown Asheville. 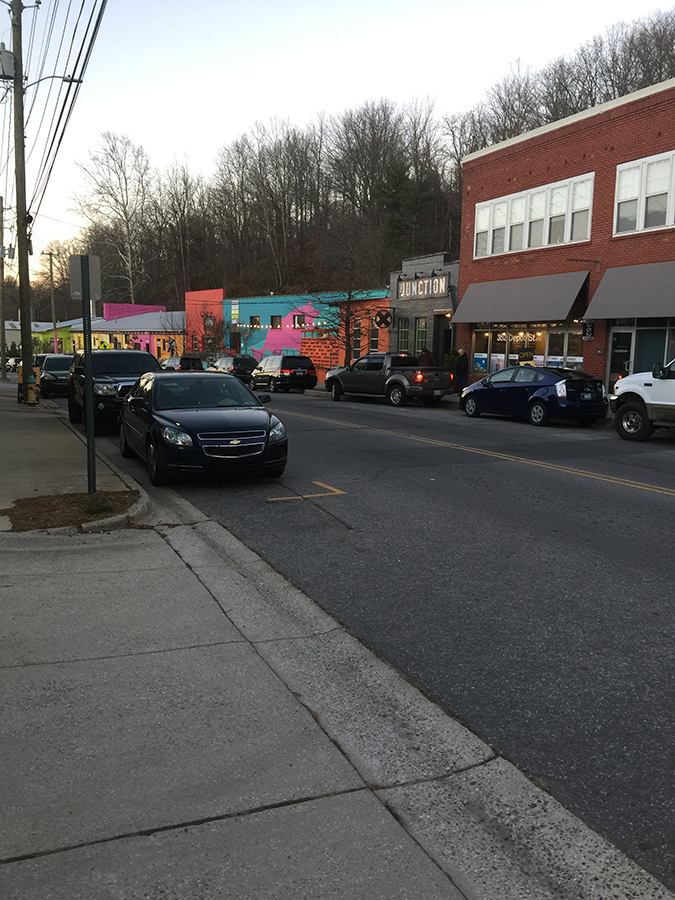 With map in hand, you should check it out, but if time doesn’t permit, there are some quality galleries in the center of the city.

The first is Woolworth Walk (which houses the old-fashioned lunch counter), the next is Kress Emporium, and finally there’s our new go-to, Horse + Hero, a southern spot for beautiful prints and posters. With dozens of local and regional posters on display, this is probably our most favorite shop of the year. 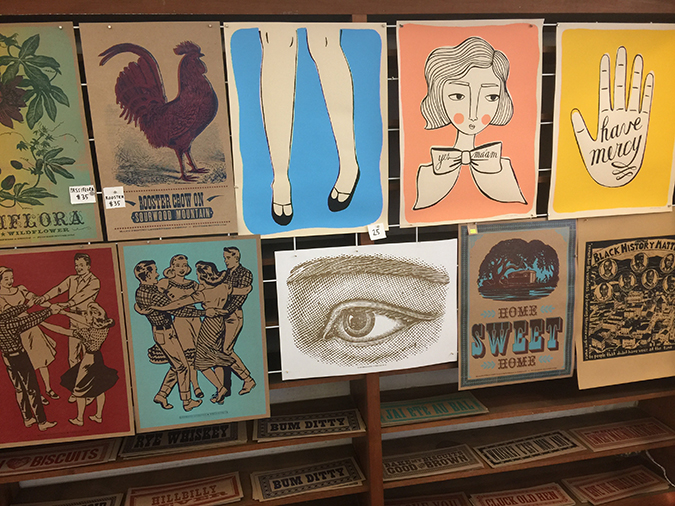 Now if music’s your thing, you don’t have to wait until Christmas Jam to hear great live tunes, just swing by downtown and shake up a storm.

Awaiting for you are The Orange Peel, Asheville Music Hall, Jack Of The Wood or The Altamont.

When you’re pegged as number one, there’s an expectation.

Asheville is ready to meet its new status with heart and spirit, but the city’s build-out is going to take a bit more time.

The arts district needs better markings or at least a shuttle.

The downtown needs a coat of paint (or at least, kindly remove the dead mouse from in front of that huge shuttered bank building on Patton Avenue).

The local hotel industry needs a wakeup-call. Over $400 a night at the highway-hugging Hyatt? Really, folks! If we had to do it all over again we’d unpack our suitcases at the Bunn House or the Haywood Park hotel.

And, yeah, the most popular BBQ joint needs to change with the times (lunch only Monday through Friday, really?) or it’s going to be swallowed up by more nimble competitors.

AND YET… and yet… we miss Asheville already… and can’t wait to go back.

We want to see the grandeur of the Biltmore Estate, drive along the Tail of the Dragon (the infamous switchback driving road), and see what all that 12 Bones fuss is about.