One of our new favorite comics is Amy Miller of Portland, Oregon.

She can also be heard on her podcast called Sorry About Your Dad. It’s about dad stuff, she says.

For more about life and living, we introduce you to one funny comedian. 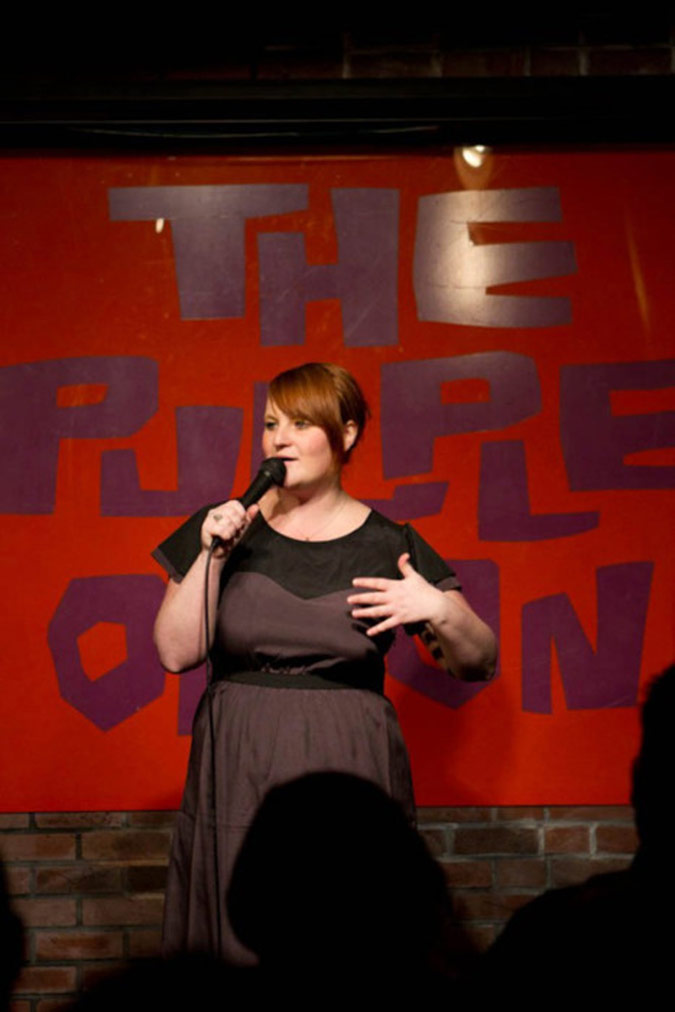 A woman in Boise told me she was going to be Jimmy Buffet for Halloween. When I asked if she was going to carry around a margarita, her response was: “My mom’s gonna be the margarita!” For some reason this made me laugh until I cried and I still don’t know why. When you spend so much time around people trying to be clever, regular folks are just so fucking funny sometimes.

Oh man. What a terrible choice to make! I don’t know if it’s my favorite but I’ve seen Stand by Me more than any other movie. It’s so perfectly cast and since I grew up sort of adult-less, it’s always reminded me of my childhood.

My sisters and I spent a lot of time traipsing through the creek by our house looking for adventure. We never found a body though.

At this point I feel weird about how hot River Phoenix still is, because it was age appropriate at the time but now is most certainly not. Plus he’s dead. Is necropedophilia a thing?

Also I hate that Richard Dreyfuss doesn’t click “SAVE” on his book at the end of the movie before powering down his computer. I hate it so much.

Probably starting comedy. Not only are the chances of succeeding so tiny, but I was terrified of being in front of people and had never had the feeling that what I had to say mattered to anyone. And those two things are sort of the whole job so it’s pretty weird that I do it.

I would care less about what other people thought of me in my teens and 20’s. My social anxiety and fear of being ridiculed were so completely crippling that I missed out on a lot.

I was never diagnosed with anxiety or medicated for it (probably should have been, in hindsight) but I would barely leave the house except to work or go to school, just because I didn’t want to be seen, or forced to interact with anyone.

During the summers in high school, I mostly watched Quantum Leap, which is a show about a guy doing everything I feared – being thrust into unfamiliar situations. Now when I say I’m shy or afraid of something socially, people just laugh at me, which is reassuring I guess. I’m faking it better now.

As a child I was fluent in Portuguese. I understand none of it now. Now it sounds like a series of puffs and whirrs.

“Find out who you are and do it on purpose.”

I’m terrified of the ocean, and the sky to some extent. I can’t watch movies about giant waves or cruise ships. Planet Earth gives me nightmares, probably due to my religious upbringing.

My pastors would tout the size of the universe a lot to argue in favor of a Creator. Like – how could something that vast evolve on its own?

So it freaks me out because I wonder if they were right and if those guys were right then hell exists too and I could be going there. You should know that if we’re ever star gazing together, I’m mostly thinking about hell. However, one of those pastors was a big time child molester so if he’s right, he’ll be there too. And no, he didn’t get me. *knocks wood*

11. What’s a book everyone should read?

I just finished Alison Bechdel’s last book. Everyone should read everything she makes, particularly if you’re trying to understand your relationship with your parents.

12. Last, but not least, is there anything you want to pitch, promote or discuss?

I have a podcast called Sorry About Your Dad. People should listen to it!

a)  You recent opened for Ryan Adams, WTF is that like?  Does comedy translate to rock shows and/or rock crowd?

I had mixed feelings about it. It was so far the biggest crowd I’ve performed comedy for (2700 people), and most of them were surprised by comedy even happening. So after adjusting to things spatially (the size of the crowd, the way their laughs traveled in this weird wave, how my voice sounded to me on stage, how to move around without moving that much because I was on stage with a full band set up, etc.) then I had to grab their attention and keep it for a half hour. All things considered, I think it went pretty well.

b)  Getting heckled comes w/ the comic’s territory.  What’s your stance on heckling?  Was there a heckler you thought made the set better?  or a train wreck?

Heckling never helps and I don’t want to give anyone that impression. Occasionally a heckler comeback can get you the biggest laugh of a set and then you have to feel all conflicted about whether it helped the show or not but ultimately I’m not traveling around to ridicule drunk people with poor judgement. If I wanted to do that, I’d be bartender.

c)  Which comics influence you the most and have you had the chance to perform with them?

Maria Bamford and yes! She is a genius at making mental illness and depression funny. When I work with her, people tend to cry a lot and thank her for saving their lives. Although that feels like a lot of pressure night after night, it’s also such an incredible thing to be able to do – help people by making them laugh and normalizing their struggle. I was supposed to be a social worker by now and sorta got derailed. People like her remind me that I still have the ability to help people in my own way.

And Norm MacDonald was one of the most genuine comics I’ve worked with. Not all headliners give a shit at this point about getting to know me. Norm asked me thoughtful questions. He’s brilliant and bizarre and we ate steak at a strip club.

d) What is your favorite processed food item?

I love ranch. That’s processed right? I’m not even sure I know WTF is in ranch. Besides my pizza slices. Oh they’re in there for sure.