Sure, they don’t get to keep it all, but they do get a majority of the merchandise sales, and the corporate sponsorship money, not to mention the home markets, where fans are extremely inclined to own every installment.  And then there are the sequels—oh, so many sequels and spin-offs.

When Disney first purchased Lucasfilm back in 2012—which included the “Indiana Jones” franchise, as well—CEO Bob Iger said this: “our long term plan is to release a new Star Wars feature film every two to three years.”

Well, that was partially true, it’s been six years and we have three, well, four films now. But, that said, “The Last Jedi” and “Solo” are just six months apart, and with planned trilogies by the Game of Thrones creators David Benioff and D.B. Weiss, not to mention Rian Johnson, as well as rumored Obi-Wan, Yoda, and Boba Fett prequels, this sort of release paradigm may be the new norm.

The only cause for concern would be the fact that Johnson’s “The Last Jedi” grossed $700M less than “The Force Awakens” worldwide. That certainly is an eyebrow raiser, and, in fact, likely the very reason J.J. Abrams is back to helm “Star Wars: Episode IX.”

Will Johnson’s trilogy ever come to light? Maybe. But odds are between what Jon Favreau is doing with the TV series and the full commitment to the Game of Thrones contingent—-let’s face it: those guys don’t come cheap. In fact, they’re probably the most sought after creators in Hollywood right now. So you know that will get priority.

What hopefully happens (and if you know me at all, you know I’m not a fan of the latest films–heck, Lucas’ prequels have more imagination and creature content than the new breed) is Kathleen Kennedy will have the foresight to imagine more than one possible outcome, more timelines, with a saga that bends the rules of time and space.

Remember when George Lucas tried to change things in his original trilogy? “Han didn’t shoot first?!?” Fans were outraged. But, it’s a different time, and these same hardcore fans aren’t particularly happy with the choices made by Abrams and Johnson, either.

So why not have alternate versions, alternate visions. I think in today’s marketplace, audiences would happily accept that. Comic books do it all the time—rebooting characters and franchises. And in terms of the Star Wars Universe, it’s been happening for a long time if you’ve read the countless Star Wars novelizations throughout the years, sometimes hopping back and forth and rewriting “history.”

The origins aren’t as important as the stories.  People will follow a good story to the end of the earth…and beyond. And don’t we all believe that alternate universes already exist? We’re all so damn meta these days.

It’s all relative, but I would hate to think a great piece of Star Wars literature like Timothy Zahn’s “Heir to the Empire” (otherwise known as the Thrawn trilogy) will never make it to the silver screen. That storyline, in my mind, is the true heir to the space saga.

Now that that’s out of the way, let’s get back to why we’re here: “Solo” is opening in 4,300+ theaters over Memorial Day weekend and is the only film debuting in wide release.

That means beaucoup bucks to you and me. How much? Well, possibly the most explosive film ever released over the holiday weekend, but on the other hand, the lowest opening of any Disney Star Wars film.

To be the #1 film of all time on Memorial Day weekend, “Solo” will have to top Disney’s Captain Jack, as Johnny Depp’s “Pirates of the Caribbean: At World’s End” keelhauled audiences with $139M over the 4-day stretch back in 2007.

“Solo” doesn’t arrive with the type of hype normally associated with a Star Wars film, nor has the critical backing of those aforementioned—currently 70% on Rotten Tomatoes—so expect a debut much closer to Pirates than many people probably expected when this was first placed on the release calendar—$140M-$150M over the extended holiday.

And what if this doesn’t end up shooting out to $1 billion worldwide—is that a failure? Maybe by Star Wars standards, sure, but certainly every studio in town would sell their carbonite-encased souls to have a “Solo” caliber film on their schedule.

Now, if this grosses something like $750M worldwide, then you can go ahead and call in the Death Star to obliterate the massive stack of prequel scripts on Kennedy’s desk. To infinity…and beyond!

By now, we all know the interesting saga of “Solo” and how Disney course-corrected at the 11th hour and hired Ron Howard to replace Phil Lord and Chris Miller, and after this weekend, we’ll find out if that was the right call.

CHOICE CUT OF THE WEEK: Annapurna’s “The Sisters Brothers” (Fall 2018)

Joaquin Phoenix, John C. Reilly, Jake Gyllenhaal, Riz Ahmed, Rutger Hauer…and Carol Kane?!? That cast is to die for, and like any western worth its spurs, it’s very likely many of these characters will end up in a pine box. Sure will be a hoot, though. Has a very interesting Coen Bros-esque feel to it, walking the line between drama and comedy. 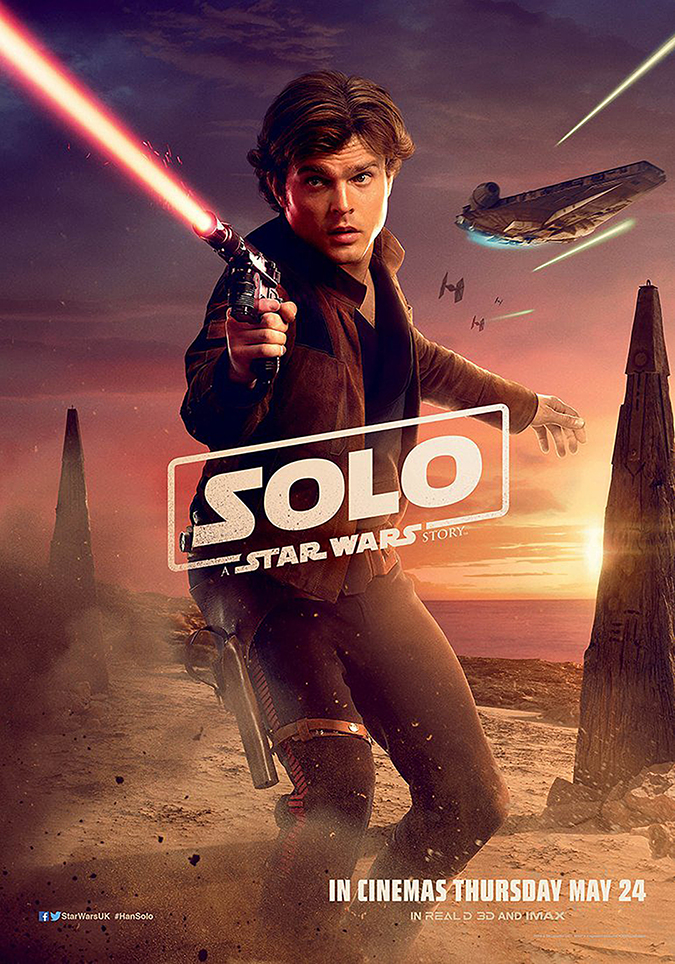