You’ve got a few weeks left to see Joan Miró: Birth of the World at MoMA (the Museum of Modern Art) in New York City—it’s here until June 15th, and if you have the time, it is well worth your attention.

The exhibit is centered on his painting “The Birth of the Word,” and specifically situates this major work among many of his other paintings, drawings, collages, and other creations; it’s a bit of a deep dive. “The Birth of the World” was something of a radical painting in 1925—rather ahead of its time, not fully abstract, and with some elements that are a bit playful and joyous in it. Miró considered himself an “international Catalan,” both from a particular place (he always insisted on using the Catalan form of his name, “Joan,” rather than the Spanish “Juan”), and a beloved and influential cultural icon by the time of his death at age 90. At the time of this painting, Miró was heavily influenced by the Surrealists, but his work is hard to categorize, or to neatly fit into any artistic school or pattern. It’s also hard to explain—perhaps it is much better just to experience it than to try to understand it. 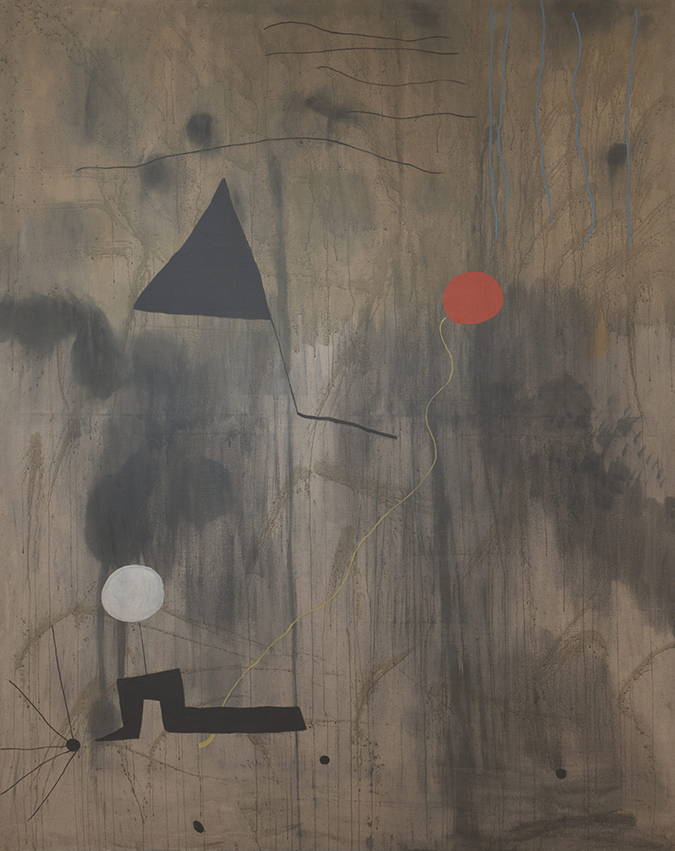 I was rather taken with one of the paintings here, “The Beautiful Bird Revealing the Unknown to a Pair of Lovers.” I liked everything about it, the playfulness, the stars, the eyes, the beauty and mystery of it all. It was part of a series called “The Constellations,” which he began in 1939 while living with his family on the Normandy coast. The village, Varengeville, was under a blackout, and as the artist wrote to a friend, “I had always enjoyed looking out of the windows at night and seeing the sky and the stars and the moon, but now we weren’t allowed to do this any more, so I painted the windows blue and I took my brushes and paint, and that was the beginning of the Constellations.” This series of works was something of a personal defense against the destruction of war, on its way. When the German forces advanced in May of that year, he fled with his wife and daughter, first to Paris, then on a train to Spain. In utter haste, Miró could bring almost nothing with him on their escape, but he carried his roll of the starry paintings under his arm. He resumed his work on the series that August. 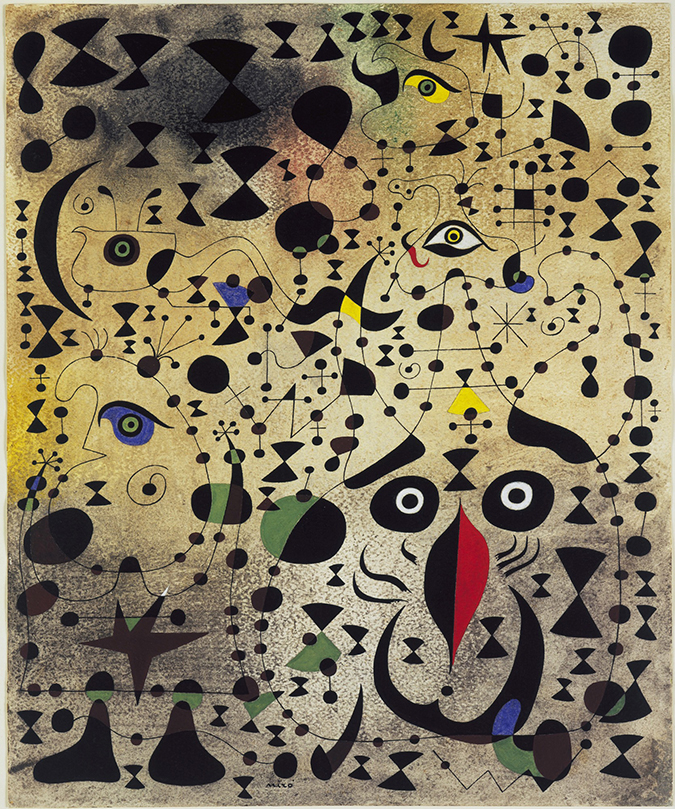 If you can afford the $85 for MoMA membership, it’s never a bad thing to support the arts, and you will have free admission for 16 months. (It’s normally for 12 months, but MoMA will be closed between June 16 and October 20th this year for a major renovation—during the interim, you can still visit MoMA PS1 and you are eligible for discounts at the MoMA stores.) The morning members-only hours are a lovely perk as well —you can enjoy the artwork before the crowds show up. If you’re only going once, though, it is $25 for admission ($14 for students, and $18 for seniors).

As long as you’re at MoMA, go visit “The Starry Night” (there will be a crowd around it, there always is, just be patient) and Mondrian’s “Broadway Boogie Woogie,” and Monet’s “Water Lilies” and Dali’s dripping clocks in “The Persistence of Memory.”

And do think about, and talk about, Miró and his inner life, and the hard-won joy and celebration he somehow managed to bring to so much of his work. He once wrote, admonishing an art critic (he despised art critics): “…wherever you are, you find the sun, a blade of grass, the spirals of the dragonfly. Courage consists of staying at home, close to nature, which could not care less about our disasters. Each grain of dust contains the soul of something marvellous.”  His granddaughter, Joan Punyet Miró, said this about him in a 2016 interview: “One of the most striking qualities I recall..was his generosity — a trait that went hand in hand with his understanding of how fragile and ephemeral human life can be. My grandfather had suffered in the Spanish Civil War: he knew hunger, and he had lived through the violence of the Second World War. I think that when the spirit suffers a wound like that it never really heals; it haemorrhages. As an artist, he knew it was his obligation to be engaged.” 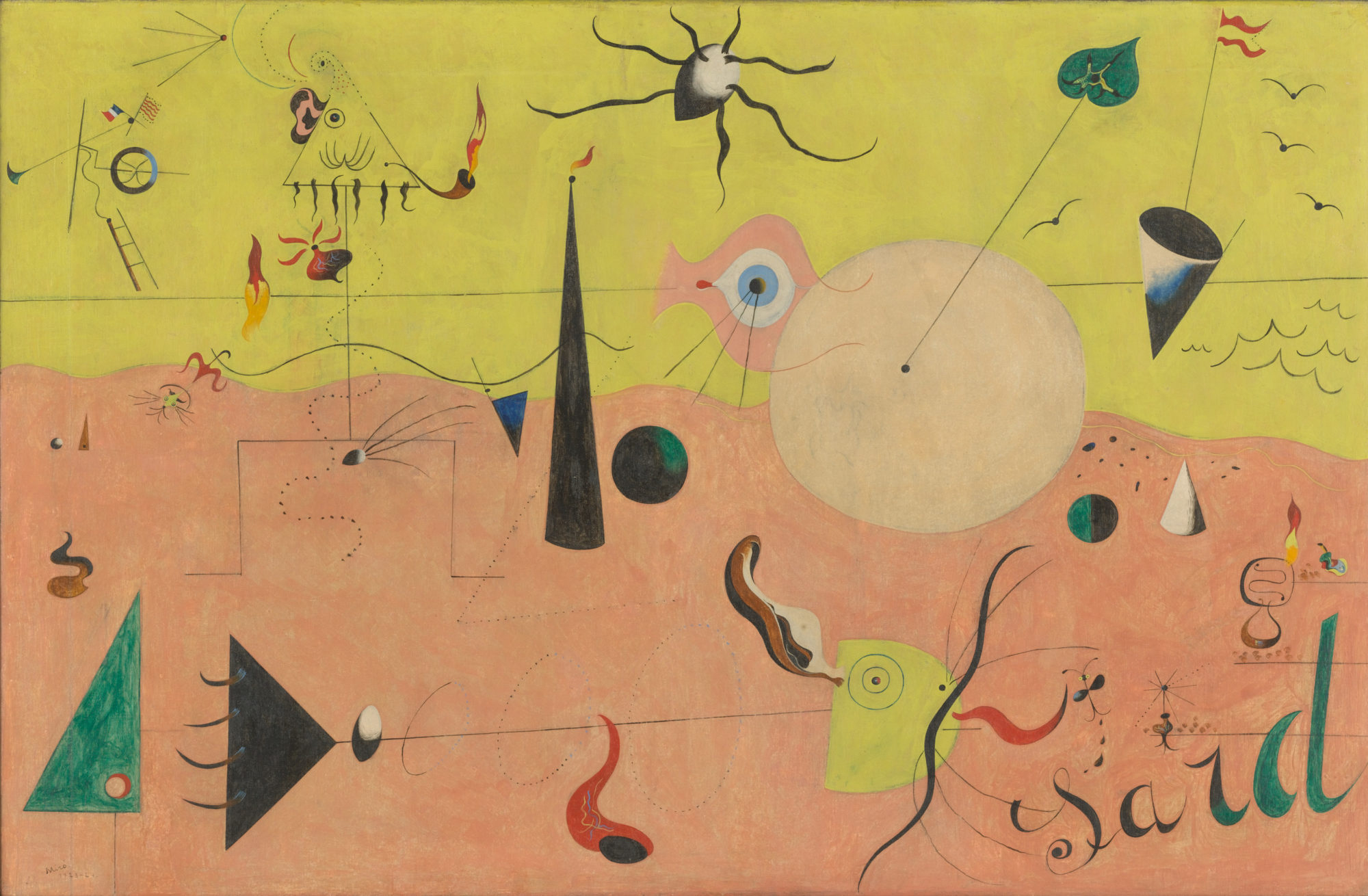