There’s nothing quite as fulfilling as spying a plethora of presents popping out from under the Christmas tree during the holiday season, and that’s the equivalent of what multiplexes are showcasing this weekend as five new wide releases look to bring unbridled joy and mega-mirth to moviegoers.

Warner launches DC’s “Aquaman,” which is widely expected to have the brightest box office on candy cane lane, while Disney’s “Mary Poppins Returns” and Paramount’s “Bumblebee” will also light it up.

On the dark side of the street lies STX’s “Second Act” and Universal’s “Welcome to Marwen,” which both are setting up for dim debuts with the high hopes of a Christmas miracle much like “The Greatest Showman” last year.

Let’s dive right in, shall we? “Aquaman” cost Warner Bros., at a minimum, $200M. That’s about par for the course for a superhero film these days, and precisely what WB needed to do to net director James Wan and that very expensive cast that surrounds Jason Momoa. Make no mistake: DC needs a massive hit to keep their universe expanding.

WB couldn’t afford to have that happen again, and with Aquaman and the Flash widely seen as the highlights from “Justice League,” they went full tilt into Wan’s vision of Aquaman’s underwater universe.

So, will “Aquaman” sink or swim? Well, that all depends on your definition of success. On one hand, it’s already a huge box office hit worldwide, grossing $266M so far, $189M from China alone.

It’s not hard to see why the Middle Kingdom gravitated towards this film as audiences in China love monsters and mayhem—the stranger, the better. “Aquaman” is packed to the gills with murky weirdness, and while that fact alone will certainly keep it from netting “Wonder Woman” numbers—$412M in North America—it does have an outside chance to equal its tally of $821M worldwide.

That is, if indeed “Aquaman” connects more than just opening weekend fanboys and fangirls. Hey, even “Green Lantern” debuted with $53M, yet faded out quickly with $116M. “Aquaman” not only needs to have a huge opening weekend, but to turn into the “Jumanji” of 2018, going deep into January, to achieve real box office glory.

Wan makes insanely watchable films—“Saw,” “Insidious,” “The Conjuring,” “Furious 7”—that is not in question here. The real benchmark will be, can “Aquaman” sustain an audience, or is it all flash and little substance? Reviews have been decent enough, although at 69% fresh, it’s a rung below both “Bumblebee” (93%) and “Mary Poppins Returns” (77%).

And with that kind of competition, it can’t be expected to hit $100M opening weekend. However, this being one of the most lucrative weeks of the entire year at the box office, even hitting $65M-$75M will suffice going forward. In 4,100+ theaters, expect upwards of $75M and a 5-day haul hovering around $100M+.

Director Rob Marshall (“Chicago,” “Into the Woods”) brings musical credibility, while Emily Blunt and Lin-Manuel Miranda provide A-list talent, and even an appearance by the original chimney sweeper, Dick Van Dyke, and a brand new soundtrack. But does anyone else think this is just a bit too staged? Or am I just being overly cynical? Balderdash!

Truth be told: “Mary Poppins” is one of my Top 25 films of all-time. The music, the mischief, the dancing. What’s not to love? But does that translate to today’s youth? Not the ones I’ve spoken to. They don’t revere the film in the same way as generations previous. It’s an oddity, not an endearing classic.

That brings us to this—will it be the #1 choice for families? Maybe younger ones, sure, but in today’s marketplace, superhero films are family fare, not sentimental reimaginings.

“Mary Poppins Returns” certainly won’t turn out like “Grease 2.” It’ll do solid business, but in the day and age where Marvel flicks are considered de facto family gatherings, can the canned earnestness of Disney still shine through? We’ll find out, won’t we?

We saw what happened with “The Nutcracker,” “Christopher Robin,” and “A Wrinkle in Time” earlier this year, as Disney got really cutesy with these films, and delivered movie marmalade with an overload of artificial sweetener, that left box office blandness throughout the land, ending these potential franchises before they even ventured into sequel-land. That alone is a flop in the eyes of Mickey Mouse.

What made “Mary Poppins” last throughout all these years? The difference between that, and say, “Chitty Chitty Bang Bang?” Sweet, sentimental, and career-defining performances from Julie Andrews and Van Dyke. It also had hidden stars: the Sherman Brothers, and they delivered the grandest performance of all–the music.

Earworms. So many catchy tunes. As good as Disney wants you to believe the soundtrack to “Mary Poppins Returns” is…it isn’t. The new songs were presumably formulated in a karaoke factory and frankly, pretty forgettable. Certainly not songs you’ll still be humming some 50 years down the road.

And the fact that you won’t be singing “Supercalifragilisticexpialidocious” or “Chim Chim Cher-ee” out your wazoo as you exit the multiplex, is the same reason we’ll likely never see another Mary Poppins movie. Well, at least not for another five decades or so. Not until they get the words and music aligned again, anyway.

The magical music is precisely what made Mary Poppins…pop. It’s the same reason last year’s “The Greatest Showman” became a box office showstopper. Reviews were porous when the Hugh Jackman starrer debuted with just $8M, but the songs reverberated, and the Fox’s flick ended up having legs that walked all over history books–$174M domestic was the show’s closing number, and $434M globally. That’s entertainment, folks.

What’s a spoonful of sugar worth these days? Possibly $22M over the traditional weekend, upwards of $30-$35M over the five-day as Disney got the jump on the competition and dropped “Mary Poppins Returns” on Wednesday, where it grossed a ho-hum $4.7M.

Let’s set the record straight: Nothing on the soundtrack for “Mary Poppins Returns” is better than a B-side on the OG playlist, and the film is more of a beat-by-beat remake than an actual sequel.

Despite Michael Bay beating a dead horse into the ground and then resurrecting it again and again and again, dishing out five “Transformers” films, Paramount delivers, in “Bumblebee,” what might be a film that has the best chance to mirror what “Jumanji” did last holiday season at the box office. Namely, stay alive.

“Bumblebee” has a 93% fresh rating on Rotten Tomatoes, and did that going up against critics that have a serious beef with the giant robots. Coming out as the freshest blockbuster film this season, well, that’s already quite an accomplishment.

Travis Knight (“Kubo and the Two Strings”) takes over the reins of the Transformers franchise and may he reign supreme in Cybertron one day, as he delivers a film that is more in tune with the original 80’s toon than Bay ever was.

You can’t blame Paramount for completely reinventing the robot with “Bumblebee,” as they really don’t have much to offer the popcorn crowd outside of Tom Cruise’s “Mission: Impossible” series.

And when you consider “Transformers” has racked up $4.3B worldwide, you then understand that it was either this or “Transformers Vs G.I. Joe.” Speaking of that…it will happen…but maybe after a “Bumblebee” trilogy.

“Welcome to Marwen” director Robert Zemeckis is a master of cinema. He’s honestly in the same class as Steven Spielberg, with very similar contributions to pop culture and delivering films that have continually harnessed the imagination of audiences for decades.

That isn’t in question. “Romancing the Stone,” “Back to the Future,” “Who Framed Roger Rabbit?,” “Forest Gump,” “Contact,” “Cast Away,” “The Polar Express”—wow, that’s an extraordinary resume that dazzles the mind with imagery.

And yet, when you think about the films he made over the last decade—“Beowulf,” “Flight,” “The Walk,” and “Allied”—you sort of wrinkle your forehead and struggle to see anything more than maybe a poster. The magic seems to have dissipated.

Zemeckis is that rare breed of filmmaker and innovator, much like James Cameron, just a lot more prolific. And while his $40M production, “Welcome to Marwen” is another technical achievement, it looks off the mark with audiences, just as his last handful of films have been, which is too bad considering what a talent he is.

With a creator of his stature, it’s probably difficult to give notes to him, or not be surrounded by “yes”-people. Universal looks like they’ll have their second-straight misfire as “Marwen” debuts in just 1,900+ theaters and may struggle to make even $5M opening weekend. Bumblee can be such a box office bully—am I right?

J. Lo is back. Is this the year 2000 all over again? STX sure hopes so. The good thing is “Second Act” cost just $16M and should debut with at least half that this weekend, and ultimately have no problem making that back and becoming a moderate hit.

That’s half the budget of Amy Schumer’s “I Feel Pretty” and much less than the $45M their big flop, “The Happytime Murders,” cost.  Perfect place for STX to be in terms of spending vs earning chances as “Second Act” bows in 2,600+ venues.

And on Tuesday, two more wide releases join in the reindeer games as Sony’s “Watson & Holmes” goes for the funny and Annapurna’s “Vice” tries to build on the Golden Globe momentum which saw their film rack up the most nominations of the year.

Neil Marshall (“Dog Soldiers, “The Descent”) directs David Harbour (“Stranger Things”) in the title role, taking over for Ron Perlman after two cracks at it.

Welp, Meh in Black is baaaaack. “Here comes the…meh.” No Will Smith. No Tommy Lee Jones. Instead we get Chris Hemsworth, Tessa Thompson, and Liam Neeson. That’s a good start…too bad it looks so bland. With a universe of possibilities…this is what we get?!? A new town–London–instead of New York? Yet from the looks of things…the same old gadgets and same old jokes.

Instead of a real reboot that scrubs the walls clean, we get what looks like another tired retread.  Too bad. Hemsworth is great when he embodies his humorous side more and his leading man side less. Should have gone full tilt with that. Still, there’s hope that Pitbull will be back for the soundtrack. So, there’s that. 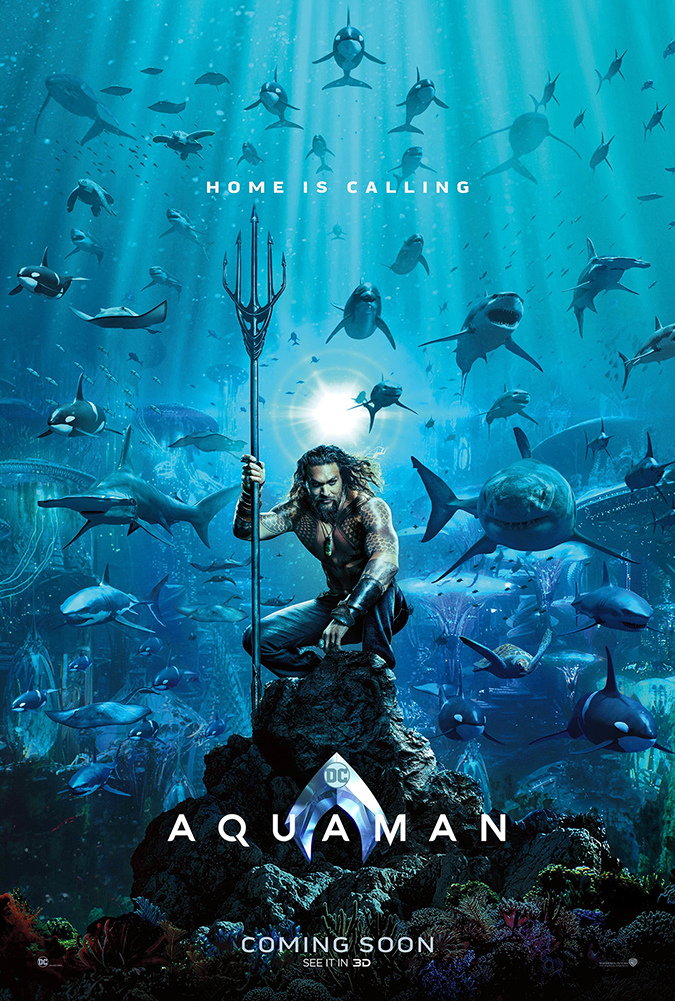