The sequel to “Fantastic Beasts and Where to Find Them,” “The Crimes of Grindelwald,” arrives courtesy of J.K. Rowling and her enchanted pen—one that continues to perform cinematic spells, astounding audiences around the globe.

Yes, expect a clean sweep at the box office as Rowling’s latest drops day and date worldwide—that bright box office light you see could be a powerful patronus illuminating upwards of $250M this weekend.

At its best domestically, “Fantastic Beasts” was never the box office beastie Harry Potter was. Two years ago, Rowling’s adult-themed spin-off scored a solid $74M in its debut, but just $234M total—much lower than any Harry Potter outing.

Times have changed, and North American grosses aren’t the only pot worth stirring, as the global tally conjured up $814M. No doubt Gringotts extended WB’s line of credit with that haul, which was all the proof the studio needed to blaze forward with a planned trilogy.

And with the troubles—chaos, to be honest—WB has had launching the DC brand, you can bet “Fantastic Beasts” won’t be the end of the line for the Wizarding World. This is just the beginning of WB’s master plan of brand expansion, and you muggles can’t do anything to stop it.

Still, stateside, “Fantastic Beasts” is more of a curio than a theme park attraction. That’s the curse of being adult-oriented in this day and age at the domestic box office, as potential blockbuster films that aspire to be more than popcorn flicks often experience stage fright when focused primarily on older audiences.

And rival studios know it. Like sharks, they can smell blood in the water.

Look, “The Crimes of Grindelwald” is not in any danger of not being crowned #1 this weekend, but to be honest, there really isn’t much hype or anticipation for this one, as audiences know exactly what they’re getting—a healthy dose of Johnny Depp, whether they like it or not, and a convoluted plot that feels further and further removed from the magical confines of Hogwarts.

Which is exactly why Fox is looking to spear rogue grownups with Steve McQueen’s highly-praised action-drama, “Widows,” and Paramount is hoping to lure families with “Instant Family.”

That’s a major push by rival studios in the domestic marketplace, one that will likely continue to erode Rowling’s magic touch stateside.

Two years ago, “Fantastic Beasts” trampled the competition as “Edge of Seventeen” and “Bleed for This” dared to unspool wide against the fantasy flick and got smothered, debuting with $4M and $2M respectively.

In the halcyon days of J.K. Rowling’s fantasy series, no film would dare open against Potter and his pals for fear of being destroyed. With “Fantastic Beasts: The Crimes of Grindelwald” there are two other films debuting wide, as well as another—Aviron’s “A Private War”—expanding into close to 1,000 venues.

That’s a lot of competition, especially with the aforementioned newcomers and “The Grinch” and “Bohemian Rhapsody” still tracking with audiences. In 4,000+ theaters, don’t be surprised to see “The Crimes of Grindelwald” falter a bit as it touches down with around $62M. That said, WB will be touting international grosses all weekend, which will probably swell like sequels often do there.

Namaste, witches…it’s still a clean sweep on the global scale.

Fox counters with “Widows,” which is the best-reviewed film of the weekend; however, ask “First Man,” “Can You Ever Forgive Me?” and “The Sisters Brothers” how much that means in terms of box office.

Still, with that cast—Viola Davis, Michelle Rodriguez, Liam Neeson, Colin Farrell, Robert Duvall—and the potential of extended playability through the holiday season, there’s a little something for everyone. The only roadblock might be the R rating.

No doubt it should contend with “12 Years a Slave” as McQueen’s biggest box office hit of his career, although that film won Best Picture and scored $56M domestic and $187M worldwide.

Could a crime thriller compete for top honors at the Oscars? Well, if reviewers have any say, you better believe it, especially since there really isn’t a frontrunner just yet.

Fox allocated $40M for “Widows,” and in 3,000 theaters, the adult-oriented actioner should make off with $14M and have solid legs through the end of the year.

And then we have “Instant Family,” which seems like it was pieced together in exactly that amount of time.

Mark Wahlberg and Paramount go straight for “Daddy’s Home” dollars, and if you don’t believe me, well then why did they hire the same director, Sean Anders?

Yep, this is a cash grab of the highest holiday order, but it would be no surprise to see the $48M production—who spends that much on a comedy these days?!?—recoup its investment as these comedies are often just the ticket to fill the 90-minute void between shopping excursions and are bulletproof to the mostly naughty, not nice, mutterings of movie reviewers.

That’s about as pointless as the leaf-blowing crews I saw endlessly swirling flotsam and jetsam around during the middle of the windstorms in Los Angeles this past week. They were literally out there just blowing stuff off lawns, only to have it swirl around and blow right back. Then they’d do it all over again. I mean, at some point…you just have to accept that there are greater forces at work. And like the Beatles said: Let it be.

Universal unspools what has likely become their best chance at Oscar glory this year with director Peter Farrelly’s “Green Book,” starring Viggo Mortensen and Mahershala Ali in 25 theaters this weekend.

Yes, that Farrelly, formerly of the Farrelly Brothers (his brother is Bobby) which were responsible for “Dumb and Dumber,” “There’s Something About Mary,” “Movie 43,” and most recently “Dumb and Dumber To.” Now you know why Universal isn’t listing the director over the title, or anywhere on the poster for that matter. It’s their dirty little secret.

Still, the PG-13 rating and solid reviews could make this feel-good flick the next “Wonder” at the box office, even if it doesn’t ultimately lead to Oscar glory.

Universal hasn’t had much success with the Academy lately, and with “First Man” basically crash-landing with audiences last month, the road-trip drama might be their best bet. They’re certainly treating it that way with the limited rollout.

That said, they did the same thing with Angelina Jolie’s “Unbroken.” However, this seems to have more gravitas than just painting a pretty picture. This one has something to say, and does so with a wink and a smile, even if its paramount moment is about how good fried chicken is. It is pretty good. Not gonna lie.

Meanwhile, Sony expands Jason Reitman’s “The Front Runner” into 48 theaters this weekend. It was mostly ignored in exclusive release last weekend, so don’t expect big numbers for the Hugh Jackman starrer. And, unless Sony wants it to be the turkey of Thanksgiving, it probably won’t expand wide next week, as it was once slated for.

Look, this is either going to be the greatest thing ever or the end of the world…there is no in between here. So, you’re either in or you’re out…or you’re planning to be completely sh*tfaced while watching this.

Truth is, if this works, watch Nintendo films bust out of the woodwork. It’s been a long time coming, that’s for sure. They might finally be playing with Hollywood power, folks. Pika, PIKA!

“The Crimes of Grindelwald” Poster Courtesy of Warner Bros.; Poster Featured At ImpAwards.com 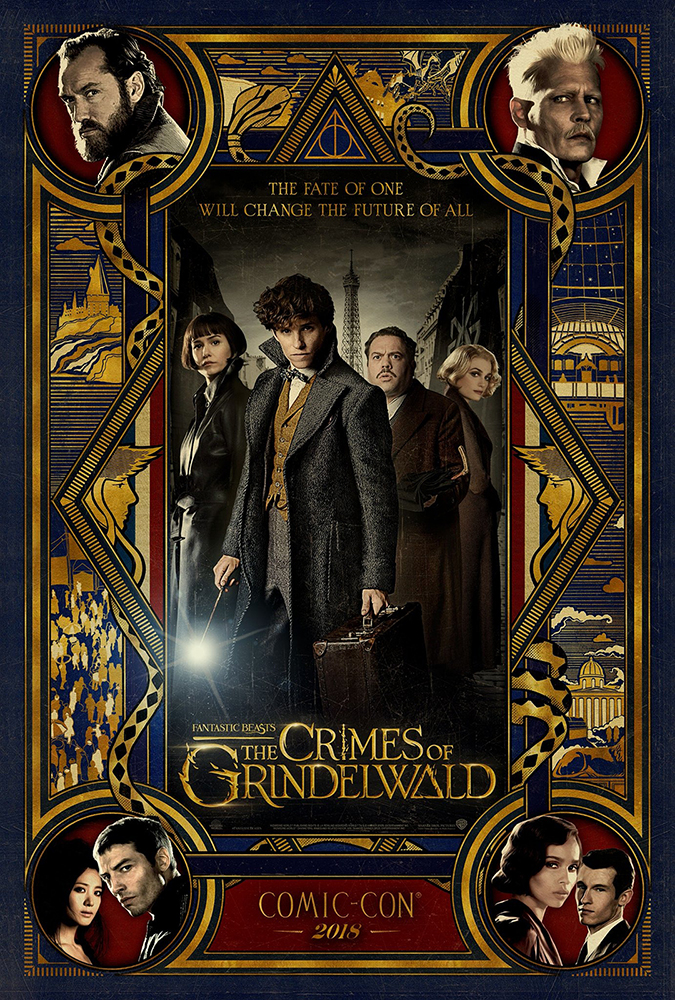 Under the Silver Lake – An Efficiently Fast-N-True Movie Review

Army Of The Dead – An Efficiently Fast-N-True Movie Review