There was a time, believe it or not, that movie audiences didn’t really smell what The Rock was cooking. They sniffed it, sure. They noted that it had a distinct odor, no doubt. But they certainly weren’t buying The Rock-scented candles at Bed Bath and Beyond. No, his 17-year box office journey is, like every great adventure, a series of highs and lows, guffaws and awes, which brings us to “Rampage” this weekend, an 80s video-game adaptation, which no one is laughing at.

That’s a big departure from 2005, when Universal dropped “Doom,” the R-rated, $60M video game abomination, which opened in October with a paltry $15M and finished with a glum $55M globally.

A lot has changed since then, and having survived an abundance of slightly embarrassing Disney films like “The Game Plan” and “Race to Witch Mountain,” not to mention Fox’s “The Tooth Fairy,” for the most part, audiences started buying into him as an entertainer, no matter how mediocre or contrived the material.

With a hit TV series—HBO’s “Ballers”—and string of box office bankrolls including “San Andreas,” “Central Intelligence,” “Moana,” and most recently, “Jumanji: Welcome to the Jungle,” it’s no surprise he’s one of the most sought-after stars in Hollywood.

“Big meets bigger” is the tagline of “Rampage,” but could also be Johnson’s own mantra, as he gives a big time box office boost whenever his name is associated with a film.  It’s no wonder he’s called in to jumpstart franchises like “G.I. Joe,” “Fast & Furious,” and “Journey 2: The Mysterious Island” utilizing his guns, his gusto, and his seemingly boundless enthusiasm. He’s worked with just about every studio in town, which makes sense, considering everyone wants a piece of what he’s cooking up these days.

It wasn’t always that way, though. When Johnson was being billed as The Rock, studios assumed because of his freak physique—rightfully so—that he would be the next big action star; however, it wasn’t until he transformed back into Dwayne Johnson and started delivering one-liners more than one-two punches that he really got rolling.

Credit 2010’s “The Other Guys” as a real turning point for him. Even though the role wasn’t huge, it showcased his willingness to make fun of his larger-than-life persona and really bolstered him as a comedy buffer. Funny enough, his comic chops, even in action films, are even more potent than his Action Jackson skills now. And, to that, you might say: “Baywatch.” Action with comedy sprinkled in is his forte right now, not the other way around.

Sure, Johnson couldn’t rescue “Baywatch” from drowning, but the mark of a true movie star is that he or she can weather the cinematic storm, which occasionally blows ashore a misfire or two.

Funny enough, Johnson’s first action/comedy, Peter Berg’s “The Rundown,” got it right. I suppose, in a way, it was just ahead of its time. Universal spent $85M on it after the success of “The Mummy Returns”—which introduced the movie-going world to WWE’s The Rock—and also its spin-off, “The Scorpion King,” which cost $60M and scored $165M worldwide. That had studios salivating—had they found the next Arnold Schwarzenegger?

Yes, they had, but it still took some seasoning—a decade of genre hopping—to really find his groove. Even bigger than “The Other Guys” was his introduction into Universal’s “Fast & Furious” franchise in 2011’s “Fast Five,” which propelled him into a worldwide box office sensation, and turned him into arguably the biggest movie star in the known universe.

A decade ago, people probably would have snickered—maybe downright scoffed—at the idea of “Rampage;” now it will easily destroy everything in its path and climb to the top of the box office heap, despite having questionable origins and being an obvious cash-grab.

Guess what? Audiences around the world adore him in this kind of role, especially in China, where the video game adaption will likely blow up, combining two things audiences there love the most—big beasties and Dwayne Johnson. Big meets bigger. There’s a theme here.

“Rampage” launches in 4,000+ theaters this weekend and re-teams Johnson with Brad Peyton for the third time after “Journey 2: The Mysterious Island” and “San Andreas.” Both passed $100M domestic, debuting with $27M and $54M respectively.

Expect “Rampage” to flirt with $35M-$40M this weekend, and it could even debut with more than “Jumanji,” which began its box office adventure with $36M, on its way to $950M+ worldwide.

“Rampage” probably won’t have the same legs as “Jumanji.” However, how it does overseas—the world tour—will be the deciding factor as to whether the $125M film is a hit or not.

With two $40M+ openers already in April—”Ready Player One” and “The Quiet Place”—this spring is turning into a real box office barn burner, which is especially fortunate for those in the industry, considering the lackluster February and March—“Black Panther” obviously notwithstanding, as that sits at $1.3B globally.

Spring is no doubt in full bloom, as Blumhouse drops their latest chill pill, “Truth or Dare,” which should also do some minor damage this weekend, although probably a bit softer than expected with “The Quiet Place” tracking down $50M last weekend, and thus still running amok in theaters, pacing the way with $25M-$30M this weekend.

In 3,000+ theaters, “Blumhouse’s Truth or Dare” might snatch $17M or so, depending on how loud “The Quiet Place” roars in its second go-round. And yes, “Blumhouse” is officially in the title ala “Tyler Perry’s.” That’s how big-business Blumhouse is these days.

Bleecker Street drops Brad Anderson’s (“The Machinist,” “Next Stop Wonderland”) war drama, “Beirut,” starring Rosamund Pike and Jon Hamm, in 700+ theaters, although if the recent “7 Days in Entebbe” is any indication of the public’s appetite for this type of film, the war drama may be DOA. Reviews have been decent, but odds are no one even knows this film is in theaters.

In moderate wide release, Neon goes for a nostalgic ace with “Borg vs. McEnroe” starring Shia LaBeouf as tennis legend McEnroe. Truth be told though, this is more Borg’s story, as it’s titled “Borg” in most parts of the world. The film has been available in multiple streams for some time; in fact, I caught it for free on a domestic American Airlines flight last week.

Probably not much interest in this, even if the performances are relatively strong. Unfortunately, the gravitas of the moment is lost, as the editing and pace of the film don’t accurately serve the emotional scoreboard of a sports drama—the elements are there, the follow through isn’t.

And finally, the animated kiddie flick, “Sgt. Stubby: An American Hero” lifts its leg on families. As someone who reports on the industry every week, nothing surprises me…except this.

Fun Academy’s $25M film is based on a true story of a stray Boston Terrier who became a war hero in WWI. I’m not saying the film missed its calling by 100 years, but, actually, that’s exactly what I’m saying. WWI ended in November of 1918, folks. Believe it or not, this story was a century in the making.

Shark Week is basically an institution on Discovery Channel during the summer, so it should come as no surprise that the public’s fascination with the ocean’s most Machiavellian beasts (or are they just misunderstood?) is at an all-time high.

The summer before, Sony’s $17M “The Shallows” hooked $119M worldwide. So, as you could imagine, “The Meg” was inevitable.

Yeah, why not blow $150M in chum bait to lure a global audience for a film with the tagline: Pleased to eat you.

Unfortunately for Warner Bros. this stars Jason Statham instead of Dwayne Johnson. However, this looks like some good old-fashioned tongue-in-cheek fun directed by Jon Turteltaub (“Cool Runnings,” “National Treasure”).

The last shark film to walk that line was Warner’s “Deep Blue Sea” back in 1999. The studio must have been happy with the results of the Renny Harlin film as their $60M production netted $164M worldwide, and berthed a SyFy sequel.

I mean, c’mon. How can you not wanna see a prehistoric shark that can swallow eight people at a time in 3D and IMAX? Folks, we’re gonna need a bigger screen.

If “The Meg” becomes a hit, expect Universal’s “Jaws” to swim back into theaters faster than you can say:  upgrade me to a collectable popcorn chum bucket, please.

MoviePass has been the talk of the industry since they rolled out the mass consumption of cinema with their low-cost monthly movie subscription service. The one question that lingers in every MoviePass debate is: How will the company make money?

Well, here’s one of the ideas: Get into the movie distribution business.

“American Animals” is MoviePass Ventures’ first stab at streamlining cash directly into their pockets, as they purchased the film, along with The Orchard, for $3M at Sundance this past year where it received solid reviews.

The film certainly doesn’t add anything new to the teen crime genre, and won’t break the bank at the box office, but ya gotta start somewhere. 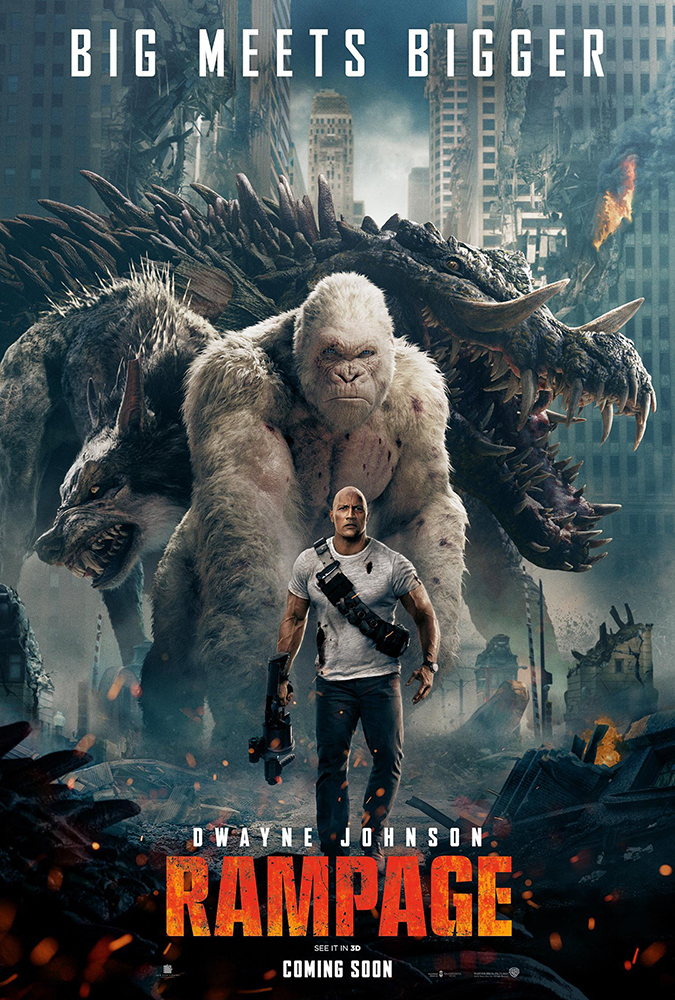