Damien Chazelle’s “La La Land” was the big winner at the Golden Globes this past weekend, basically sweeping the awards show, earning seven trophies—the most ever at the event, which is one of the most popular Hollywood happenings this side of the Oscars.

That certainly makes Lionsgate’s $30M film one of the Oscar front runners; however, it was already in that conversation, along with “Moonlight,” which was awarded just one trophy, but it was a doozy, Best Drama, while the other early Oscar favorite, “Manchester By the Sea,” also netted a single piece of hardware—Casey Affleck for Best Actor in a Drama.

The PG-13 musical has already belted out over $86M worldwide, and hasn’t yet opened in many major European markets, as it’s headed down the home stretch in terms of being the hot film as the industry delves into all the Academy Awards hoopla.

“La La Land” leapt into the Top 5 for the first time last weekend with $12M, but will have to contend with six new films that are debuting or expanding wide this weekend. That’s one crowded playlist. Still, should see about the same totals this weekend.

Peter Berg’s “Patriots Day,” Martin Scorsese’s “Silence,” and Ben Affleck’s “Live by Night” all roll out into multiplexes across the country, but even though Scorsese and Affleck have substantial Oscar and box office pedigree, it’s Berg’s real life Boston marathon bombing recount that will likely be first at the finish line come Sunday.

People expecting a documentary on Tom Brady and his quest to become the greatest quarterback of all time may be disappointed, but “Patriots Day” certainly will appeal to the entire New England community, no doubt, and, like the New England Patriots…it will certainly have a lot of fans from coast to coast. When asked for a comment from Bill Belichick about the movie, he just stood there, eyebrows furrowed.

Although not delivering any awards glory, Lionsgate/CBS Films’ “Patriots Day” looks like the sentimental choice, as it goes forth in 2,900+ theaters this weekend, and should run off with upwards of $20M+.

“Patriots Day” has been playing in seven theaters for three weeks, and has amassed nearly $900k.

“Live by Night” has also been in exclusive release since Christmas, although it’s been no gift for Warner Bros., or audiences for that matter, as the $65M film has been floundering with just $168k.

Those are pretty lackluster numbers, despite the goodwill Affleck has built up as a director with his well-received films: “Gone Baby Gone,” “The Town,” and “Argo.”

The R-rated gangster picture has been shut out of the all the major awards presentations and is certified “blah” on Rotten Tomatoes with 33%. That’s pretty much the kiss of death for a drama these days, and nothing like the towering achievement that Affleck achieved with his last film, the Best Picture winning “Argo.”  What a difference a couple years makes.

In 2,300+ theaters, “Live by Night” will be fortunate to snatch $12M before it straps on cement shoes and disappears forever into the deluge of dramas desperately seeking screen time.

Scorsese’s “Silence” will also have a tough road; while it boasts a fair amount of critical acclaim, it’s also getting pretty much passed-by in terms of awards, and its nearly three-hour running time isn’t doing the R-rated drama any favors. Hey, that’s Scorsese for you.

Look, you either want to watch a pair of Jesuit priests (Adam Driver, Andrew Garfield) confront merciless Scorsese-style violence and persecution in Japan while spreading the good word of Catholicism…or you don’t.

I’m going to go out on an olive branch and guess most multiplex marauders don’t—$3.5M in 750+ theaters this weekend.

There are also three new releases—“Monster Trucks,” “Sleepless,” and “The Bye Bye Man” over MLK weekend, although none are expected to compete with last week’s champ, Fox’s “Hidden Figures,” which nudged out “Star Wars: Rogue One” after its three week reign.

STX’s chill pill, “The Bye Bye Man” should perform the best of the newbies with around $11M in 2,300+ theaters, as horror has been a January staple for some time now. That said, the cheap-o, $6M flick will probably be heavily front-loaded of Friday as it does fall on the 13th.  Could bolster the bottom line, and may end up surprising if it’s any good.

STX actually released “The Boy” last year to the tune of $10M and ended up with $64M worldwide. When you don’t spend more than $10M on a horror flick, you have a fighting chance to get out of the red and into the black much, much quicker.

Open Road Films hasn’t had a lot of success lately, with “Snowden,” “Max Steel,” and “Bleed for This” all missing the mark last fall. Their latest, the crime drama, “Sleepless,” will also court African American audiences this weekend; however, the Jamie Foxx and T.I. starrer doesn’t holster much buzz, and only arrives in 1,800+ theaters.

Hard to peg this one, but can’t imagine with all the R-rated films in the marketplace that this will fire up much more than $8M. Seems like a pretty straightforward generic cop pic audiences have seen many times before. Now, if they were giving out free Dunkin Donuts with each ticket purchase, that might change the game a bit.

Things that rhyme with Monster Trucks: WTF, down on your luck, spare a buck—all of these are relevant here.

Let’s face it, it’s not often you see the biggest bomb of the year released so early, but Paramount, which has already taken a massive $115M write down on “Monster Trucks,” is figuratively throwing their film into the car crusher at the junkyard.

There is no salvage operation here as the kiddie flick—which might have been huge if it was released in, say, 1983— cost Paramount $125M and probably a lot of jobs, including the Paramount exec’s four-year old kid that supposedly came up with the idea. He’ll definitely never work in this town again. Poor sap.

Strangely, there was a time when this was supposed to be a straight-up animated film, instead of a live-action hybrid. Should have gone that route, as Mystery Science Theater 3000 probably wouldn’t even touch this turkey now.

In 2,800+ theaters if “Monster Trucks” somehow makes $50 bucks I would consider that a success. Honestly, even last year’s awful kiddie-confetti, “Norm of the North,” debuted with close to $7M over the holiday weekend, so this might do about the same.

What do you remember about the NBC TV series that ran for six seasons in the late 70s/early 80s? Dick jokes, perhaps? Yup. Dax Shepard’s adaptation has ’em. A bushel of ’em, in fact. Wait…were you expecting something different? Fart jokes? It has them as well. In fact, the slugline of the film is: Chip Happens. 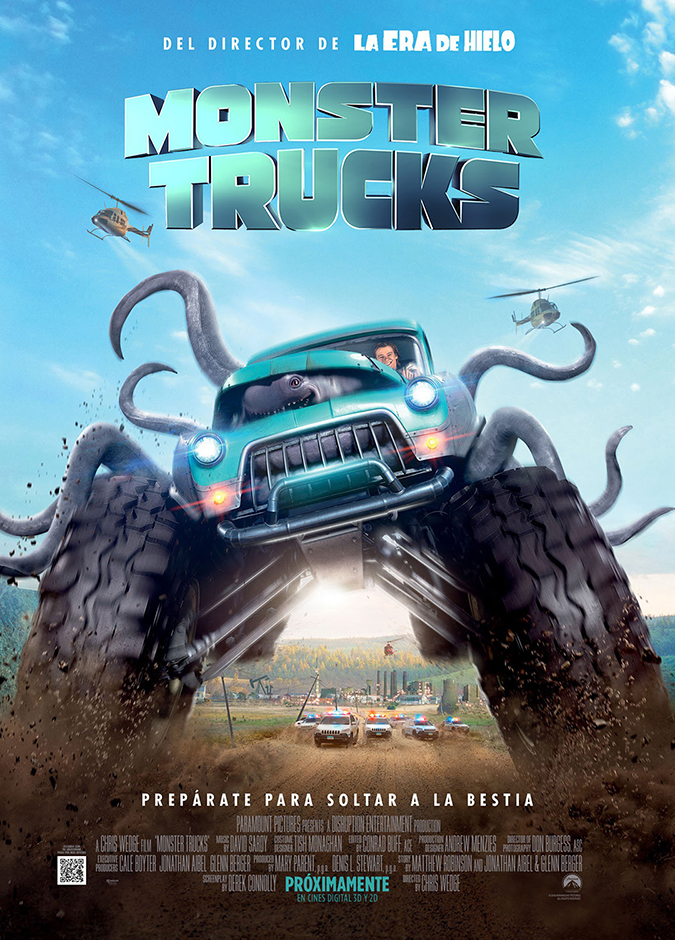