Hollywood really couldn’t have planned it any better if they tried.

With our society still reeling from the hurricanes that hit Texas, Puerto Rico, and Florida, as well as the wildfires that have ravaged Northern California and Montana, theaters brace for the 1-2 punch of WB’s epic disaster pic, “Geostorm” and Sony’s firefighting drama, “Only the Brave.”

By why stop there when you can also drop three other new wide releases into theaters, including Tyler Perry’s “Boo 2!,” Universal’s “The Snowman” and Pure Flix’s “Same Kind of Different as Me.” Talk about a fire sale.

Even though Warner’s spent $81M on “Geostorm” and it drops in more theaters (3,000+) than any of the other new flicks, the Gerard Butler starrer is only expected to earn upwards of $12M this weekend, which won’t be good enough for #1, and might not even snag #2. Talk about a disaster movie living up to its genre—that’s an epic failure.

Interestingly enough, the film is the directorial debut of mega-producer Dean Devlin, who scored big time at the box office with “Independence Day,” “Godzilla,” and “The Patriot” nearly two decades ago. Since then, however, it’s been more misses than hits, with “Eight Legged Freaks,” “Flyboys,” and “Independence Day: Resurgence.”

“Geostorm” has already lived through multiple disasters that include extensive retooling and reshooting, not to mention bouncing around like a Ping-Pong ball in a tsunami on the release calendar as it’s been bumped from multiple release dates. In a bit of cosmic retribution, the film is being released three years to the day when principal photography began.

So who’s #1 this weekend? Even if you tried, you couldn’t stop the second coming of Medea monster mash.  Just when everyone thought interest was waning in Tyler Perry’s titular character, Madea scared up a $28M last year in its debut, and“Boo!” became Perry’s 2nd biggest hit of all-time with $73M–tops is “Madea Goes to Jail” with $90M.

In 2,250 creepshows, “Boo 2!” should easily haunt the top of the box office as it looks to scare up $20M+ this weekend. Should have no problem doing that, especially since Tom Hanks and Lorne Michaels still haven’t greenlit the Halloween movie everyone really wants to see, “Haunted Elevator” starring the one and only David S. Pumpkins. Any questions?

“Only the Brave” has been setting the critical circuit on fire, as reviews have been scorching; however, whether or not that acts like box office kindling remains to be seen.

Joseph Kosinski is at the helm, making his first venture outside the sci-fi realm as his previous two directing efforts were “Tron: Legacy” and “Oblivion.”

Still, audiences don’t seem that interested, and with a $38M budget, Sony had better hope the winds of change act quickly, otherwise “Only the Brave” might crash and burn. Expectations are very low, as the studio itself projected just $6M in 2,500+ theaters.

And then there’s “The Snowman.” Hey, at least it’s not a Christmas pic, right? Although, I’m sure a lot of folks wouldn’t mind a live-action Frosty the Snowman reboot.

Universal drops the R-rated thriller starring Michael Fassbender into just 1,800+ theaters, which is surprising, given their success last year with “The Girl on the Train.”

Reviews have been awfully damning, and anything less than 2,000+ screens is basically a hatchet job by the studio, which routinely debuts adult thrillers in 3,000+ theaters. “The Snowman” may pack in $7M-8M and quickly meltdown thereafter.

What? You want more? Okay. Pure Flix releases “Same Kind of Different as Me” in 1,800+ theaters and may see around $3M. The drama stars Renee Zellweger, Greg Kinnear, and Djimon Hounsou.

In exclusive release, A24 slings Yorgos Lanthimos’ latest “The Killing of a Sacred Deer,” with Colin Farrell front and center just like he was last year in Lanthimos’ indie hit, “The Lobster.” This one looks an awfully lot darker, lemme tell ya.

Yes, the new X-Men series is here…but then why does it feel like we’ve seen this a million times before. The positive spin? Josh “The Fault in Our Stars” Boone directs. Hopefully the second trailer drops a bit more substance.

Lead-In Image (“Only The Brave” Movie Poster) Courtesy of Sony Pictures; Poster Design by The Posterhouse 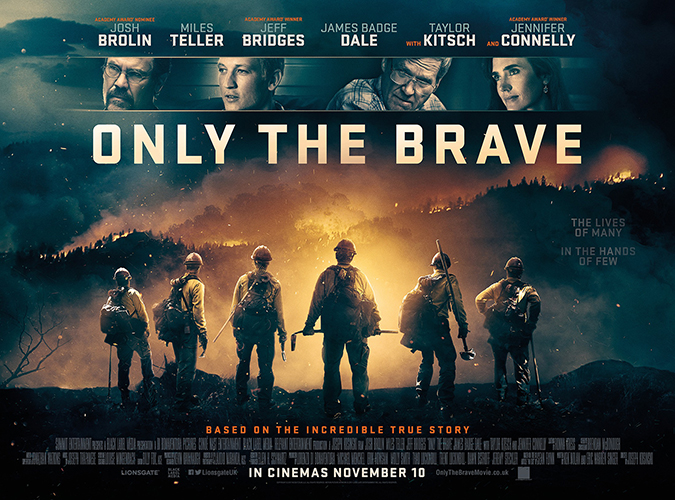